Alright it’s school girl time! We say goodbye to Stephane/Jen/Ben and book it back from Roponggi Hills to Anne Hostel in Ryogoku. Make a quick stop at the Family Mart to grab some beers for our costume prep. We’ve gotta get decked out in our sexy Japanese schoolgirls cosplay outfits and then jump back on the metro for Shibuya. The Halloween street party looks legendary. It’s getting a little late, we may just time this perfectly. This is gonna be fuuuuuun!

Queenie puts my hair up in pigtails and I get my costume on. It’s a little small and tight. Perfect. I guess this would be the second time I’ve cross-dressed internationally on Halloween?

I look like absolute shit but Queenie can’t stop laughing so in that sense, mission accomplished! We have a few beers and I ham it up a bit for a pic. We’re having a school girl gigglefest in the hostel. Next step: Pillow fight!

Queenie gets her outfit on and she actually looks pretty good in hers. We’ve killed a lot of time in the room getting silly. All the beers from Brew Dog and Ippudo have hit and we simply can’t stop laughing at these outfits.

We run into a guy in the elevator as we make our way out of the hostel. He chuckles as he gives us the up and down once over, “Ohhhhh very nice! You guys will be a hit!” Lots of giggles in the lobby as we pass through. We can’t help laughing at ourselves in the reflection of the door. And we’re out on the street passing flabbergasted business types.

We get to the metro station and people just don’t know how to handle this nonsense. They’re hiding their smiles behind their hands. We’ve shattered the politeness border and some people are full on pointing and laughing.

The train comes and we jump on board. Oh shit, it’s packed! Are people just getting off of work? It’s like 10:30. There is no one wearing costumes on this thing. WTF? People are trying to be discreet about snapping pics and staring. Queenie and I just can’t stop laughing. My cheeks are getting sore. This is such a ridiculous situation, we’re causing a major scene. Hopefully we’ve made someone’s day.

After people calm down a bit and get used to it we take a few pics ourselves. 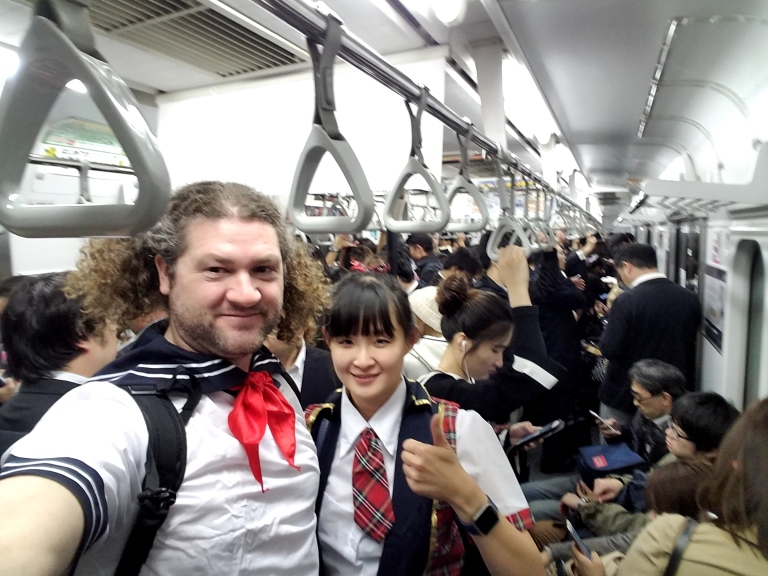 Ok wait though, i would have thought we’d at least have seen some people in costume by now. I take a look out the window. Hmmmmm this doesn’t look very familiar. We’ve taken this route a few times now but I don’t recognize where we are. “Ahhh Queenie, are we going the right way?”, “Ohhh I don’t know!”

We take a break from giggling our faces off and serious it up a bit. Yeaaaaah how are we the only ones dressed up on this train heading to the largest Halloween party in Japan? The next stop gets announced and I cross-check it with the map. Ahh for fuck sakes! It’s totally the wrong direction. We’d gotten so distracted being this total public disgrace that we didn’t even notice we’d been heading in the opposite direction for.. almost a half hour?!! Man, how drunk are we? “Alright we’re getting off!”

Dammit! We fucked this up big time. We’re 6 stops in the wrong direction! Everyone on the train really was just coming home from work. Now we’re just silly looking schoolgirls out in the middle of nowhere on the outskirts of Tokyo.

There is no one around at all. We’re just 2 sexy schoolgirls alone on the platform. And with the metro closing in an hour we’ll get to Shibuya and only have about 10 minutes at the street party. I suppose we could Uber back. Fuck. First things first I guess, back on the train.

Queenie just continues to laugh and laugh at me. 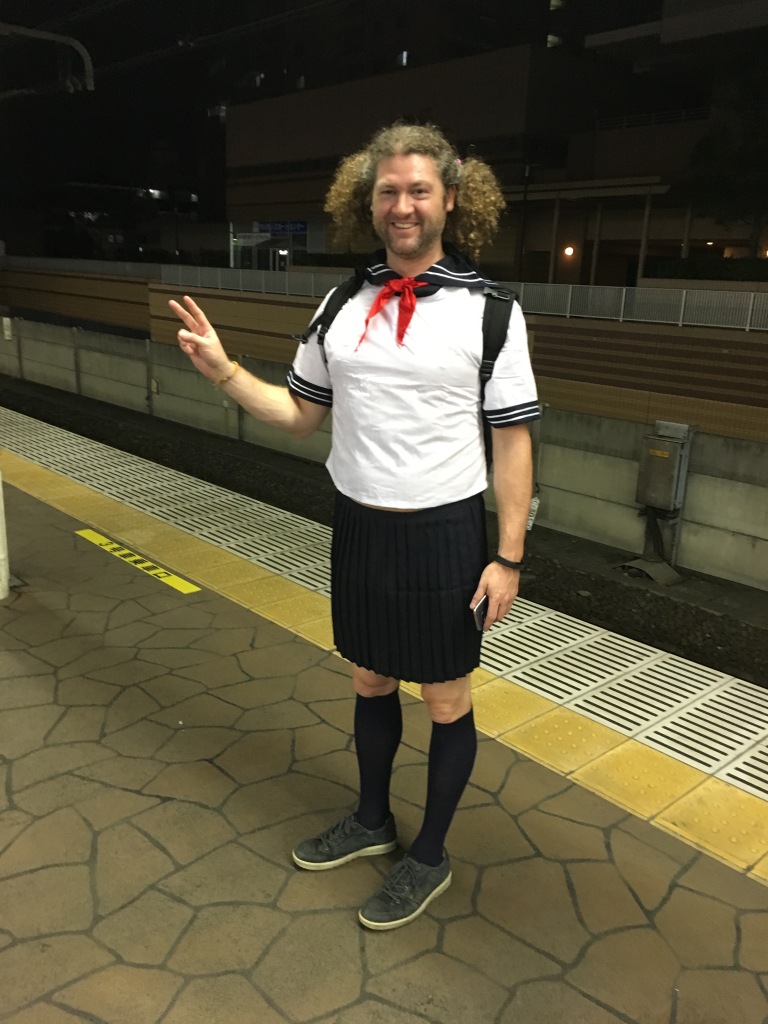 The train in the opposite direction is almost totally empty. We still can’t get over how bad we fucked this up. “Oh but it’s still fun, just watching people laugh at you”, I suppose that’s true. Plus I’ve now laughed so hard that my ribs hurt. “I think we can chalk this up as a win, let’s just go back”, “Yes!”

We call off the street party and go back to the izakya by the hostel. The hostess is visibly amused as we walk in but she politely sits us down and bows with a “Happy Halloween”. She gets it. We browse the menu. Ohhh a yakitori spread, num num num, looks like some interesting items. We’re getting colon for sure, reminds me of the spicy asshole we ate in Hong Kong. Then there’s also something called… conceive? 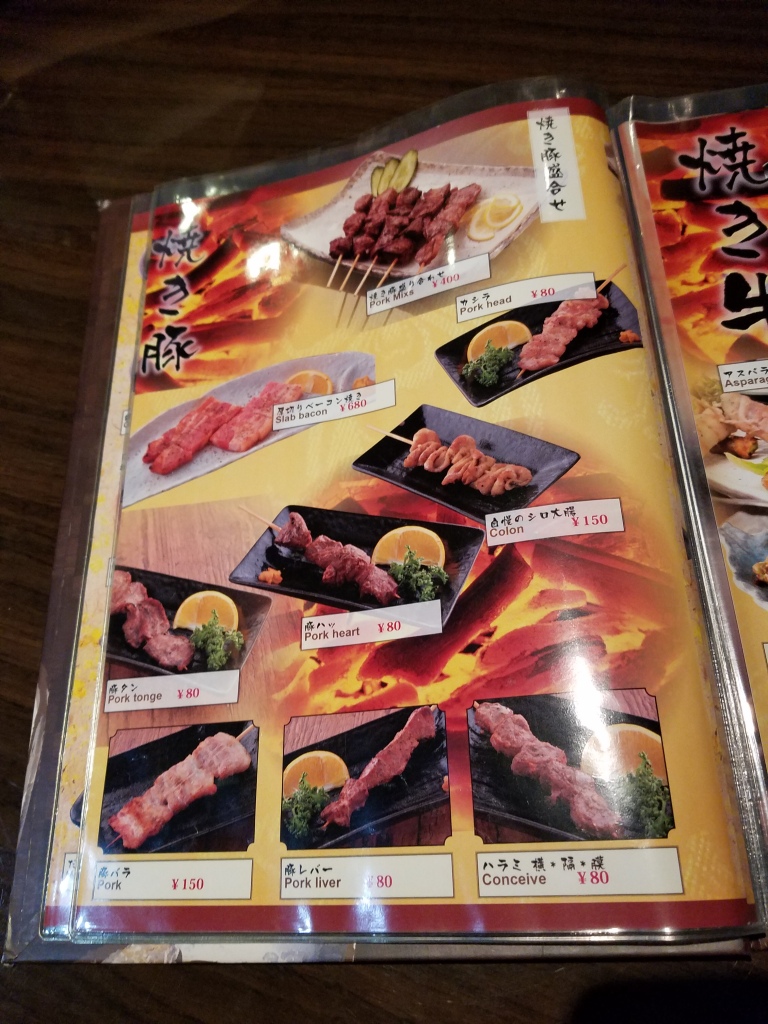 Screw it, we’ll just get one of everything and a couple of highballs to calm us down. Ahhhhh well that’s funny. We totally messed up Halloween. Kind of.

A rowdy group of 5 business dudes come bursting through the front door by our table. They’re all laughing at some recently landed joke and patting each other on the back. These guys are pretty tuned up actually. As soon as they see me they start raining down high fives and say “Happy Halloween!”, “Happy Halloween!” and shaking me by the shoulder. One of them has to stop, “Ahhhh! Whoa! School girl!”, I curtsy in my seat and they all crack up laughing. “Happy Halloween! Happy Halloween!” and the hostess takes them to what seems to be their usual seat.

These five boisterous business boys proceed to order every morsel of food and drink in the restaurant. They are a barrel of laughs, erupting frequently into hearty head-back cackling and every once in a while will throw a random “Happy Halloween!” in unison back at our table. This is great.

The food comes out and Queenie eyes it up. Looks pretty good!

The asshole wasn’t very spicy and a little rubbery

I think these may be pork hearts? Not much bigger than chicken hearts. Or is this the conceive? Whatever it is, it’s sizzly pork deliciousness!

Well maybe this turned out ok. Who knows what shenanigans we would have gotten into downtown Shibuya. I’m sure it would have been fun, but we literally haven’t laughed this hard in a decade so it’s hard to complain about how things have turned out. The food is good and we’ve gotten a ton of laughs out of the locals.

Still… I wish my boyfriend wouldn’t have stood me up