Just a few blocks away from the Bali An is the ROR comedy club where Rodney is hosting a show. Everyone is at the shisha place upstairs so we slide in and are greeted with a warm welcome from what now seem like old friends. They’re sitting around a table with some used hookahs and rounds of empties. Better get to it then. We pull right up to the bar for a drink. This place seems like a killer hang out

There’s a sign for something called an A-Bomb on the bar. Never heard of it so I inquire with the bartender. “You look like Hagred!”, “Haha yep, I’ve been getting that here. And Joe Cocker. What’s this A-Bomb?”, “Coca Liqueur and red bull”, “Lol, wow. Yep that should do it. Two of those please and two sochu and green tea.” Might as well go right back to the start. 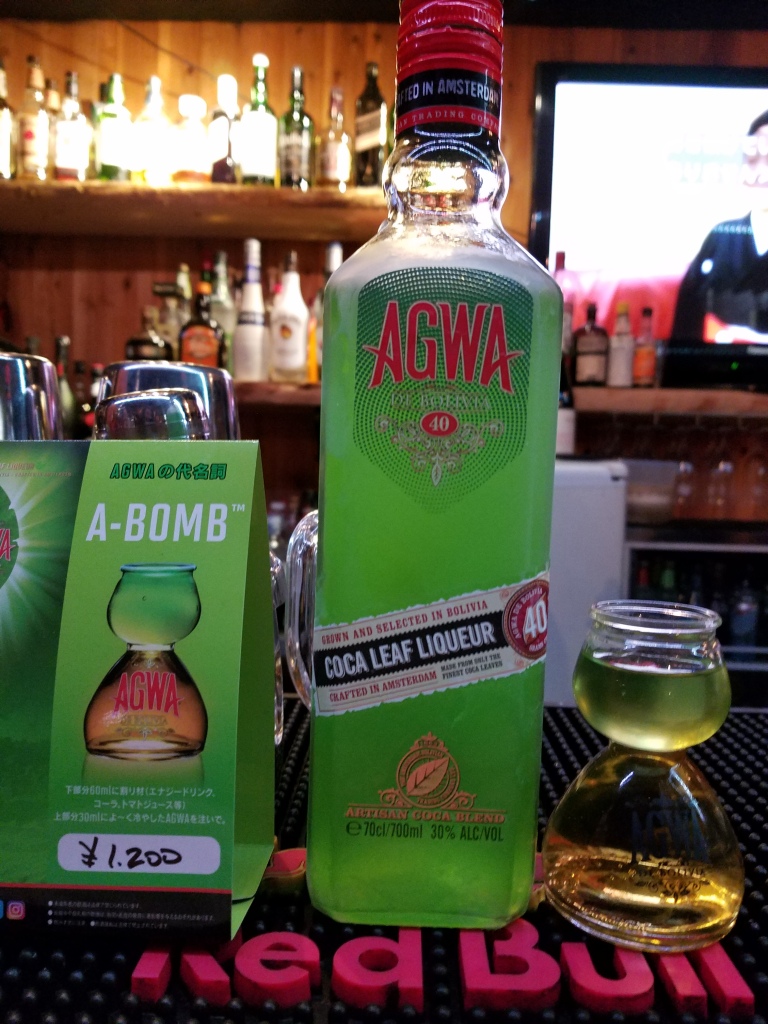 We grab a seat with the gang and get a round of high fives and hugs from Rodney, Saki, Andrew and Miari. Andrew has a buddy from Halifax visiting named Paul. He just rolled up and has a giant roller luggage bag beside him. We shoot the shit about our trip and Halifax. Seems a good dude.

Soon it’s time to go check out some stand up comedy. We filter downstairs and grab some seats right up front. 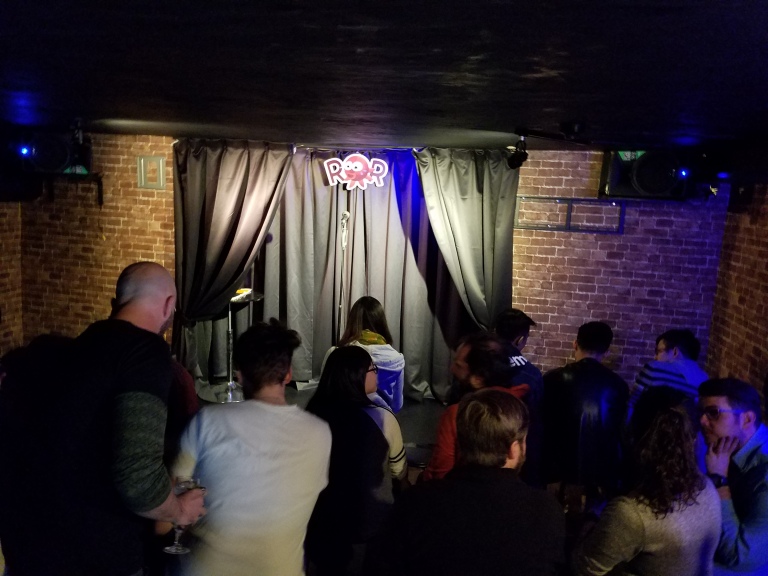 Rodney comes on stage and hosts the show. He has a natural feel being a host and is quick witted enough to basically be making an improv event of it. He asks around the crowd where people are from and pokes fun at their homelands or their answers to great effect. He starts a jab at us, “Well, I know you guys. That’s not much fun, is it?”

Out of respect and as not to be a distraction in the front row, I didn’t take a single pic or video of the event unfortunately. But a quick search of ROR popped Rodney up as the first vid, so here’s a sample.

Rodney introduces each comedian, being sure to pay them equal amounts of respect and ball busting before they go on. There are four of them, all completely different and all legit funny. Between the four the show hits the spectrum of observational and relatable, left-field absurd, mega raunchy, and quick hit one liners. We laughed our asses off and since we were in the front row we got picked on a lot. Fair game. Even got a round of applause for our recent engagement. Really fun and truly hilarious time. Glad we made the effort to get back for it.

It’s great that they have ROR here, I think it might be the only stand-up comedy joint in Japan. Nice and intimate room too. There’s a break in the middle to re-up on drinks and the comedians basically hang around, drink and chat to people afterwards. Excellent format.

Rodney is introducing us to everyone after the show and Queenie is brilliant enough to request a pic with all the comedians in it.

After the show Andrew and Miari split to take Paul back to their place. I give them a round of hugs and thank them again for showing us a good time here. Come visit us any time in California, our turn to host.

Our posse of comedians rolls out to a chicken wing place around the corner. Rodney says it’s the shit. We get some tips from everyone and go for an assortment of hot, mild and cheese filled ones. We put our order in at the vending machine and grab an assortment of sauces. Excited, I love chicken wings. Naaarmz they are good! Really good, who is this guy? 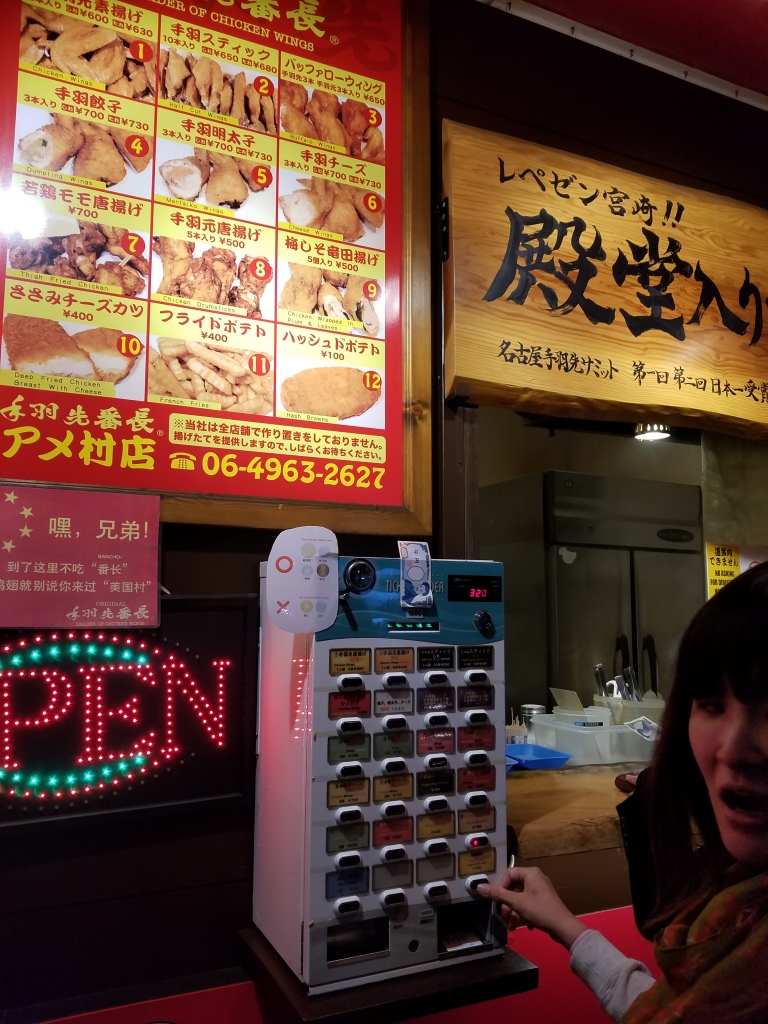 After wings we slip down to a place called Moonshine that Rodney says is a new bar in town.

There are a number of interesting cocktails here. I’m getting pretty tuned already, but I order one that includes a dollop of peanut butter.

I spot a sign on the wall for free karaoke. “Wait is this a karaoke bar?”, “Oh yeah, man!” and Rodney asks for the magic song pad thingy. “What do you wanna sing?”,”Hmmm Dead or Alive?”, “Bon Jovi? I’ll do the Waaaaaaaanted back up”, my man. We duet a Bon Jovi shatter storm and on queue the place lights up with everyone putting in karaoke hits from throughout the ages.

A full bar rendition of Don’t Stop Believing has people walking by banging on the windows from outside. We’re kicking up such a karaoke ruckus in here that people are coming in to see what’s happening. I get another peanut butter and.. whatever that was. Great drink.

I meet a guy named Jazz. He says he’s from Akron, Ohio. Oh Queenie used to live there. I introduce myself and he says his name is actually Jonathan too. “Huh, I didn’t know that”, says Rodney. Weird, so you’re Jonathan, I’m Jonathan and you and Queenie both lived in Akron, Ohio? Let’s do the time warp again!

We meet another dude named Stefan. The karaoke luster has passed and he says he knows another new place if we wanna check it out. Yep, why not? First, group shot at Moonshine. 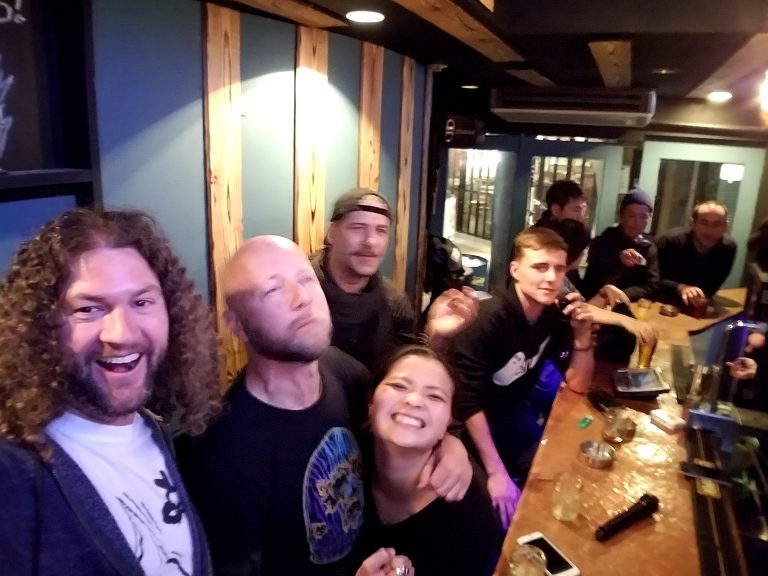 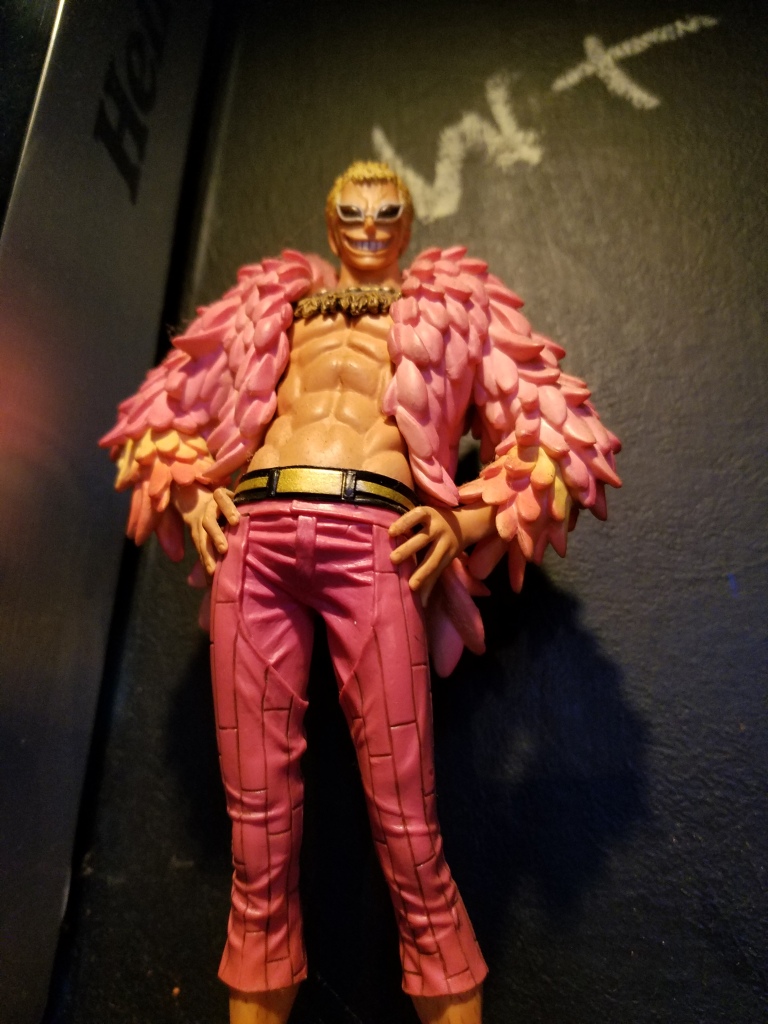 We hit the streets for a couple blocks and come to a hole in the hangout.

It’s a simple and awesome little concept with Fifa hooked up to a tv, a foosball table, small bar and a few niche little sitting areas. It’s a neat, hidden kind of place. We grab a drink and settle in.

Stefan owns a bar or two around town. He tells me a story about meeting Oasis one time. They were in town for a show, Liam and Noel came to his bar while it was reggae night. I can’t remember the rest of the details. Maybe it was that they hated each other so much Liam showed up 2 hours later then Noel? I dunno.

Rodney and I decide to have a turn at the foosball table. We take on the defending champs and proceed to royally whoop their asses. Foos.Ball.Champs!

Stefan offers to take us down to the new club that he’s opened up. Says it’s popping off down there right now and he’ll just get us in. We’re ripping it up, sounds good.

We get to the entrance and there is a bit of a line. He wasn’t kidding this is a legit club. We go around to some side entrance and he pulls out a jangle of keys. He opens a security door and lets us in. “This leads straight up to the VIP area”.

He takes us up stairs and there is this interesting red room, decorated with antique-y stuff with a view out to the dance floor and DJ. He runs down and grabs a bartender from downstairs to serve us and says, “Whatever you guys want”. 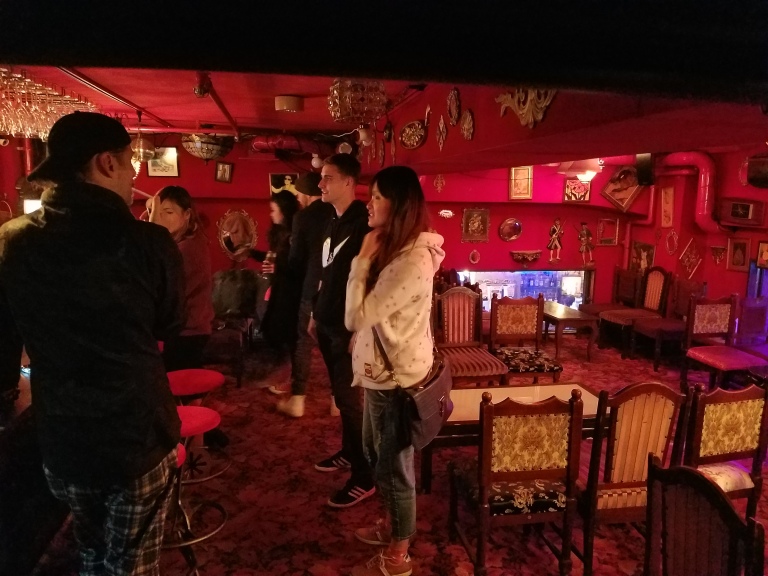 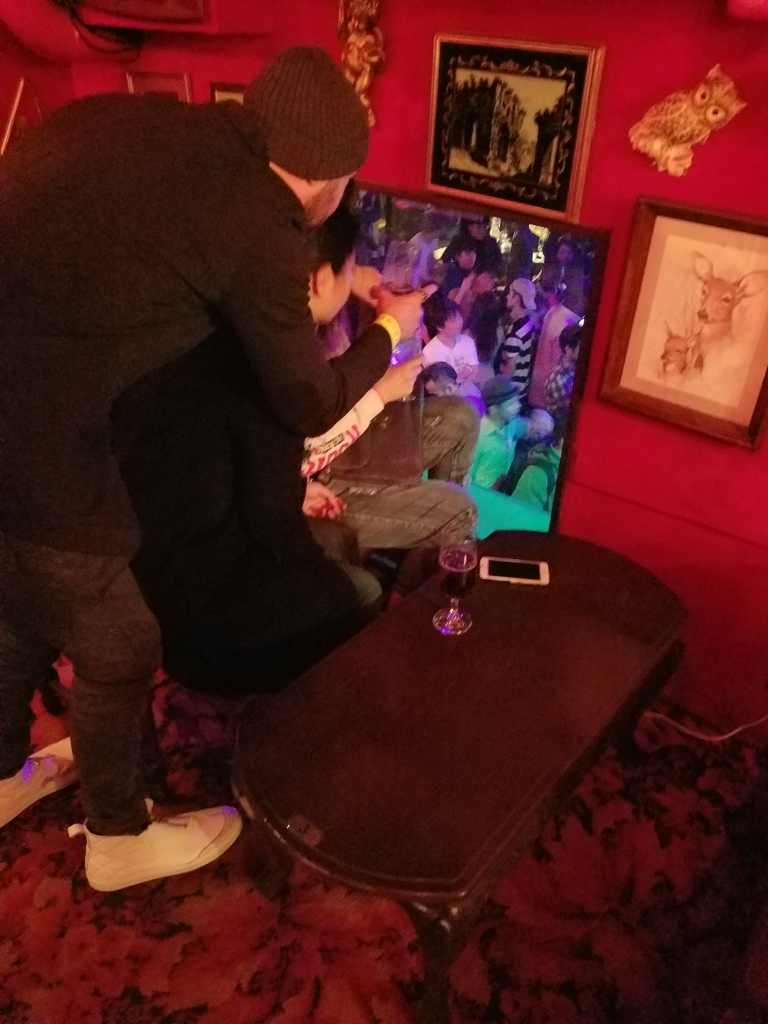 We kick it in our private section for a while laughing and telling stories. Stefan brings out rounds of shots for us. Queenie and I are getting shitfaced at this point. “You guys wanna go dance?”, “Yerssh!”

We drop from the VIP stairs onto the dance floor like royal vampires. The club is bassy. Elbow to elbow. Girls dancing on the bar. Shots of something. DJ is pulsing. Two smoking dancers on either side. Stefan with more shots for us. 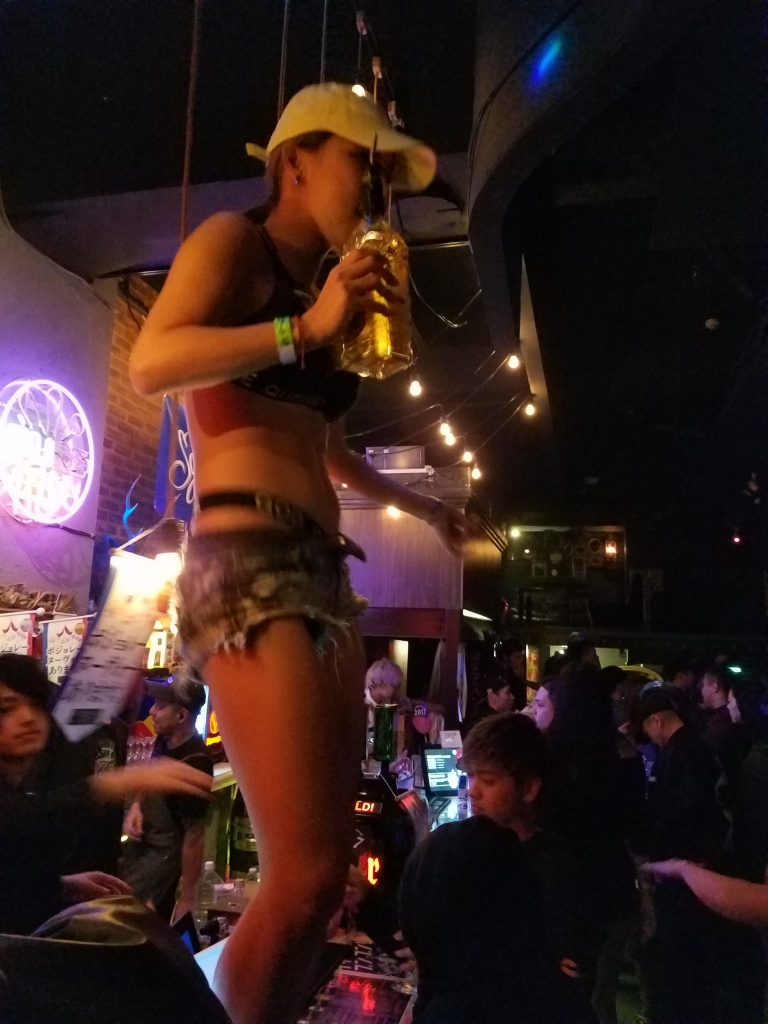 We hit the dance floor and find a groove. It lasts a while but the drinks are amassing at an awkward time and there are too many people to fend for space. I read it on Queenie’s face and there’s no point forcing it. Rodney and Saki are ready too. A few simple nods and we’re on our way out. I stop to thank Stefan and give him a hug for his hospitality and the drinks. “Anytime, come back soon.”

We get out of the club cacophony onto the street. It’s time to say goodbye to Rodney and Saki. Again, we’ve had a wonderful time and it is because of you guys. Our experience here would simply not have been the same. A million thanks, hope to see you guys again soon. Come to California and visit. We’ll be back, sooner than later I hope. Hugs and cheers.

And they double on the bike into the Osaka nightscape. 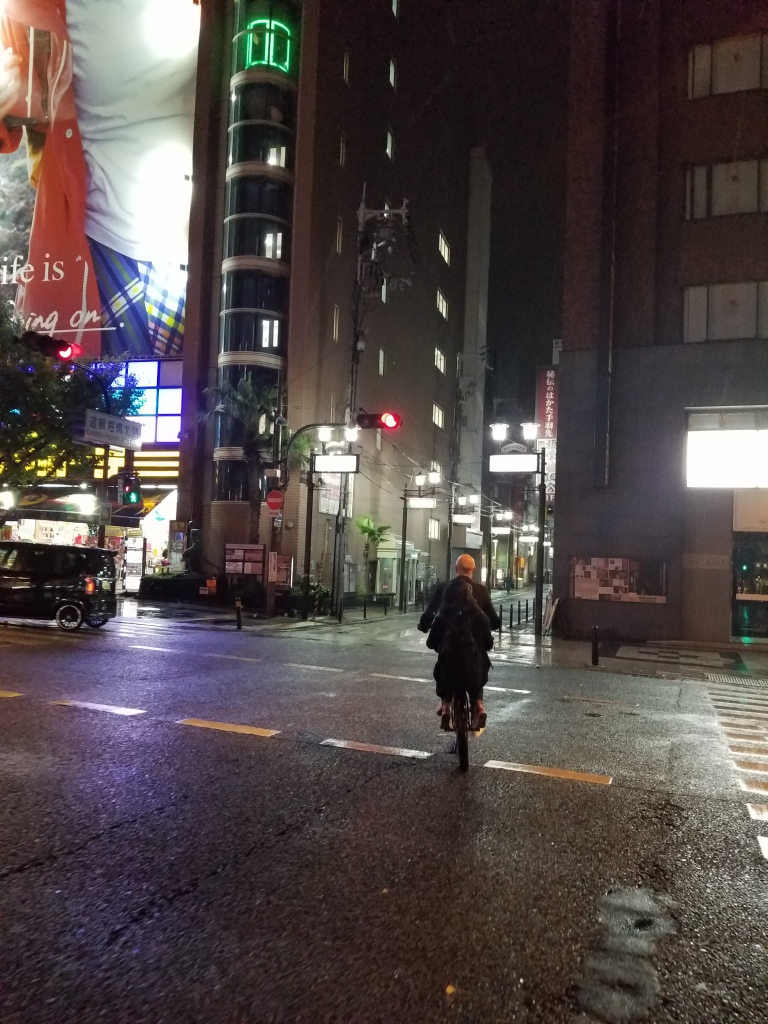 Across the street from our sex hotel is a Spanish tapas place that’s still open. I don’t remember what we got there but I do remember our nonsensical drunk giggling not being very funny for them.