Ahhhhh nice to have the room for another day and not have to rush in the morning.

I wake up and McBurger starts telling me a funny story. Apparently he got confused and locked himself out of the room last night. Pounded on the door and woke everyone on the floor up but me. Pissed everyone off and had to go to the front desk in his skivvies to get let back in. I slept through the whole episode, which is weird, usually I’m a super light sleeper. Those ear plugs really work.

Ok, I’m gonna have to double down on the brat diet again today. After a brief reprieve yesterday I’m back to having to pay respects to the porcelain altar every twenty minutes. Going on 5 days now. Probably go to the pharmacy and see what they can do to help too. Devin Castle is the only thing on the agenda today. But at this point ridding myself of this shit is all I really care about getting done before leaving here.

With that in mind we look for some Asian restaurants to make the rice dish portion of the brat more interesting. McBurger finds a Korean spot called Yum Yum. Bibimbap sounds perfect.

We find the place not too far away, down a side alley between apartment buildings. Weird location. It has a nice outdoor seating area where you can be watched by everyone in their apartments.

Kimchi fried rice and Milkis, c’mon guts let’s do this! The rice is delicious. 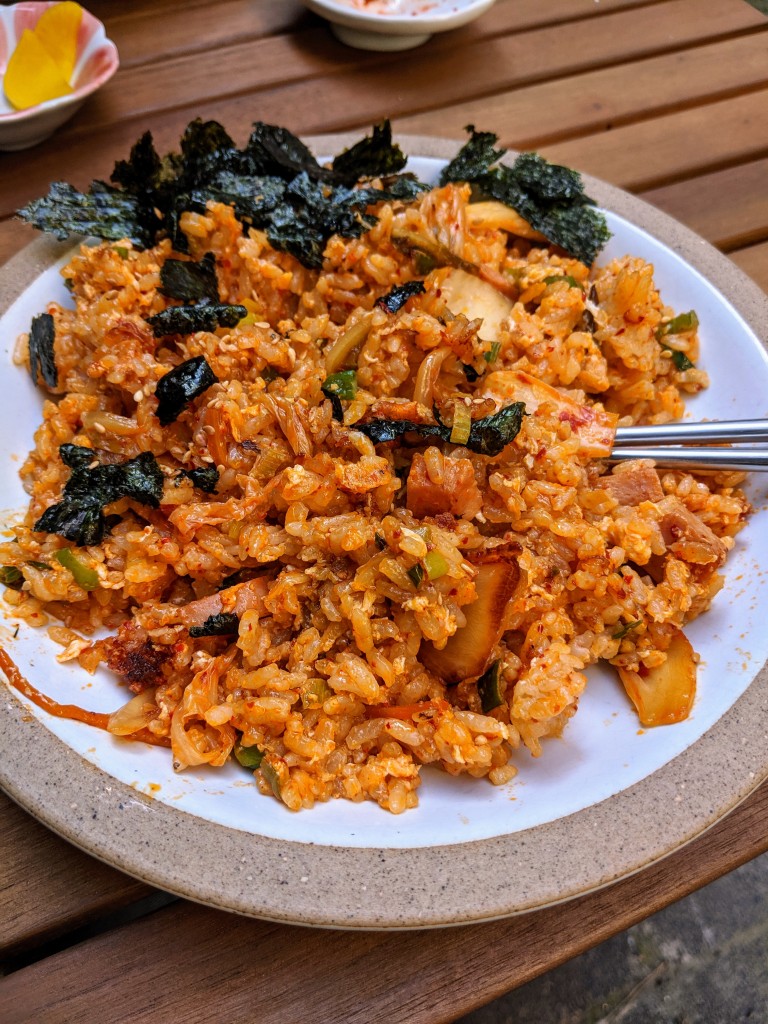 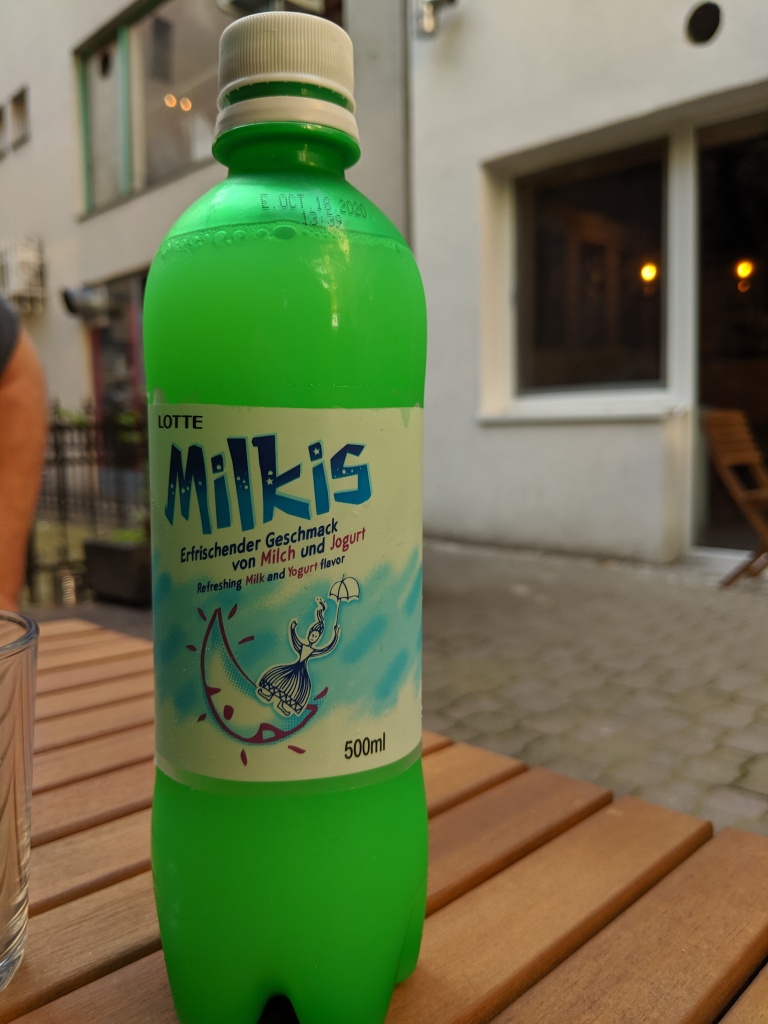 After lunch we make a stop at a Dr Max. I remember in situations like this on previous trips we’d tried something like Gas-X to help clear things up. Embarrassingly, I ask the pharmacist girl what I could use to get rid of a gas pocket. She shows me two things. “They are the same but this one is stronger”, “That one then”, “One pill, three times a day”, “Ok, thank-you. I’ll get some multivitamins too.” It’s time to health up.

Next step, bananas, applesauce, toast and Gatorades. McBurger says he’s running off for a massage and haircut while I take care of that. Not sure why he needs a haircut, he barely has any as it is and he couldn’t possibly look any douchier. Well.. yeah he probably can.

I continue on to a local grocer to get a ‘fuck this shit’ bundle. Bananas, yogurt, multi grain crackers, smart water, and a large dumb water. 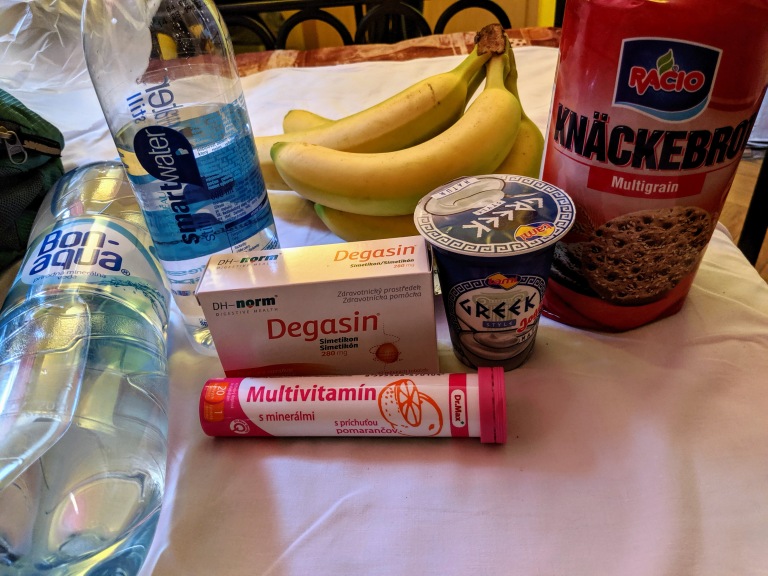 I wait for McBurger to get back to the hostel with his fresh cut dome. He’s only done the massage portion of his errands, still wants to get his hair cut. “Alright, you wanna hit up Devin Castle?”, “Nah, I’m gonna hang back”, “Hang back? It’s an overgrown ruined castle on a cliff over the Danube. You’re gonna skip it?”, “Yeah I’m just gonna chill here. Really want to get my haircut too.”

This makes no sense to me. I try to reason with him, “It’s not like we’ll be back to Bratislava anytime soon. It takes very little effort to catch the bus out there. We’ve got three hours and have all evening to get a haircut and do nothing”, “Nope. I’m just gonna sleep.” And he tucks himself in. Pffffft what the hell? That’s lame as fuck (this is the equivalent of a couple’s fight for Adventure Detectives).

Alright Narco let’s go. I toss Narcopiggy in my daypack. He’s always game for anything and never complains about shit. Best travel companion ever. And no meat farts.

I figure I’ll make back the time I lost waiting on McBurger by taking an Uber. ‘None available’, what the hell? Shit, it’s a 25 minute walk, better get moving. Of course I’m racing the sun to the castle, because somehow it always turns into a race.

After a few wrong turns and a web directions nightmare trying to find the bus station under four levels of overlapping roadways, I finally find it down down down across the street from the Danube under everything.

Ok, Check-in Girl said I need two tickets and to remember to validate both on the bus ride over. Apparently the ticket machines frequently don’t work over by the castle.

Hmmm.. Weird system. Pay by the travel time? Two 30 min tickets I guess. 1.80. Put in 2 and it gives it right back. Ahhh no I don’t have exact change. Try again. Nope. Shit. Ok, maybe this one is out of change. Try another and it works. There we go, bus will be here in 8 mins. Where’s platform 29?

As time ticks down I’m zigzagging to each pole checking numbers. It’s not in here? WTF! I get out to the street and find it just as the bus pulls up. Sheeesh. I hop on and validate both tickets in the little snicket-snicket machine. I grab a handhold. It’s fucking boiling on this bus. Perfect.

The bus follows the Danube West out of the downtown area of Bratislava and it quickly turns into rural neighborhoods. It’s pleasant out here, nice to get out of the city. Seems like most people on the bus are simply going home from work. I’m the only tourist-type on here.

I get dropped off in the quaint town of Devin. It’s a super quiet neighborhood with pretty wooden homes. It reminds me of the places we walked passed on the backside of Trakai. There are signs to the castle but I spot a narrow path that looks headed in the right direction. Maybe I’ll shave a few minutes off this race.

I come out just a few houses down from the parking lot. Around the corner and there it is up on a cliff overlooking the river. Awesome! 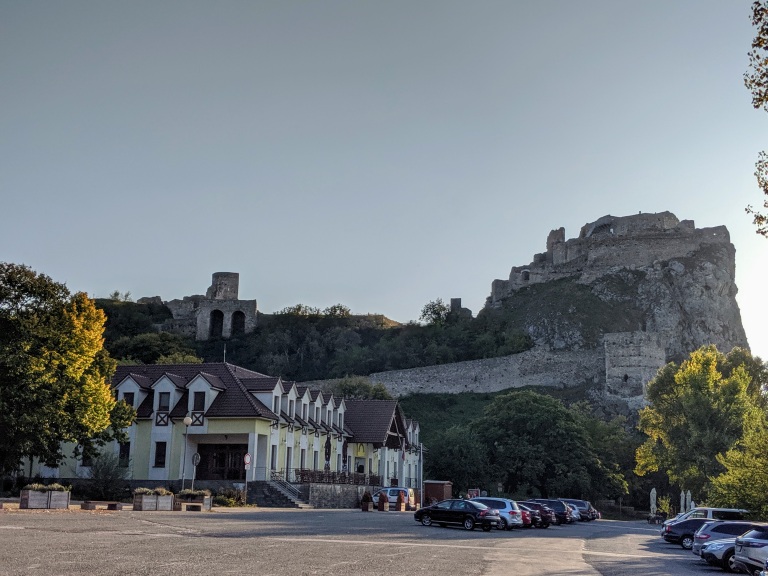 I follow signs to the front entrance. There’s a steep hill going up to the castle gates. Buns of steel, let’s do this. I power walk up the path. There’s an older couple up at the entrance talking to Gate Dude. Oh shit, he’s turning them away? Oh no no no…

I truck up and the castle gates are just closing. Gate Dude says something to me in Slovak. “English?”, “I’m sorry. It is closed”, “I can be quick”, “No no is not possible. Come back tomorrow. Please.” Well shit. Looks cool up there. No luck this round. You don’t always win the race.

But I thought I’d have hours up here. I check the website and it says it closes at 630. It’s 445 now. That sucks. Ah well, nothing I can really do about that. At least I can get down to the Danube and see what’s around.

There’s a nice paved walk around the base of the castle by the water. A few couples are out having a peaceful walk. Some folks down the banks fishing in the river. A little redheaded kid comes over to me on a scooter and waves hi. Alright I missed walking around the castle grounds but this isn’t so bad. I can still catch a glimpse of the castle from below.

This section didn’t hold up to time and weather so well. Looks cool though. This watchtower is known as the Maidens Tower. The iconic imagery, separated from the castle, alone on top of the rock, has conjured countless legends of imprisoned, lovelorn daughters leaping to their deaths

The site that Devin Castle sits on has been settled since the Neolithic age (which started 12K years ago) and then fortified through the Bronze and Iron ages and was owned by the Celts and Romans at various points. Sitting atop a cliff overlooking the confluence of the Morava and Danube rivers it is an ideal fortification to watch over the trade routes of the river and the Amber Road.

I’m guessing the view from the top is spectacular. 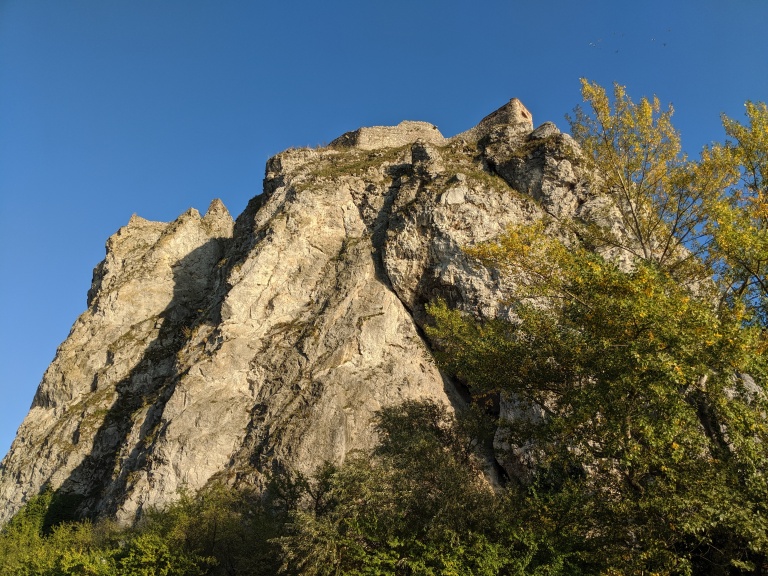 It’s quiet here below the castle by the river. Hardly anyone around. Nice to be out of the city too. Things are cooling down after that bus ride and the race. This is great. Just the occasional biker and some families with strollers.

Interesting monument here all shot up with pockmarks. Concrete slabs and some bent rot iron bars. What’s this about? 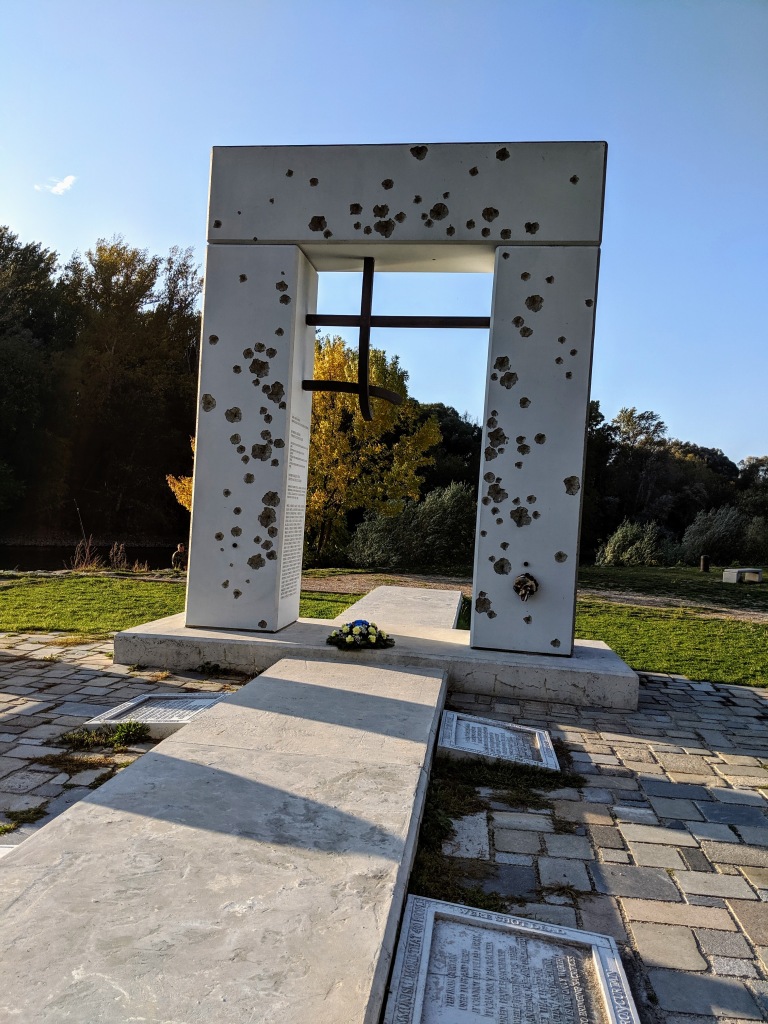 It’s the Gate of Freedom Memorial which commemorates the Iron Curtain of the Cold War that used to cross right here where the Morava and Danube rivers meet at the border to Austria. Oh shit, the other side of the river is Austria, didn’t even realize where I was. There used to be military installations, barbed wire, watch towers, etc…. All of it was removed in 1989 after the non-violent Velvet Revolution ended communist rule in the CSSR (short for ‘Czechoslovak Socialist Republic’, or just Czechoslovakia) and the Soviet satellite state was split into Slovakia and the Czech Republic.

The plaques state that up to 400 people were shot dead at this location during the Cold War.

Nearby is what looks like a barbed wire heart. 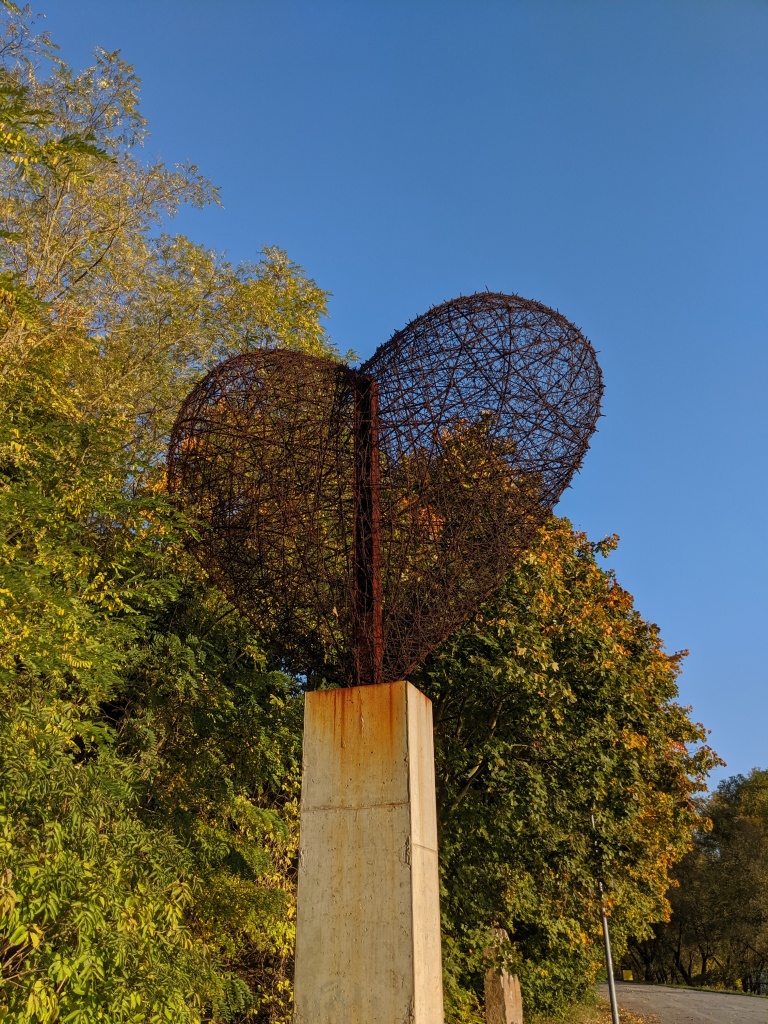 I keep walking along the water, enjoying the sound of the river and the setting sun

I come to the far side of the Devin Castle walls above some sort of lighthouse. Not sure what this building is, maybe a museum? It’s pretty, whatever it is.

Shot of Narco below the castle walls.

I backtrack passed the castle again…

…and go the other direction for a little bit. There is a wildlife sign describing the area as the Morava River floodplain 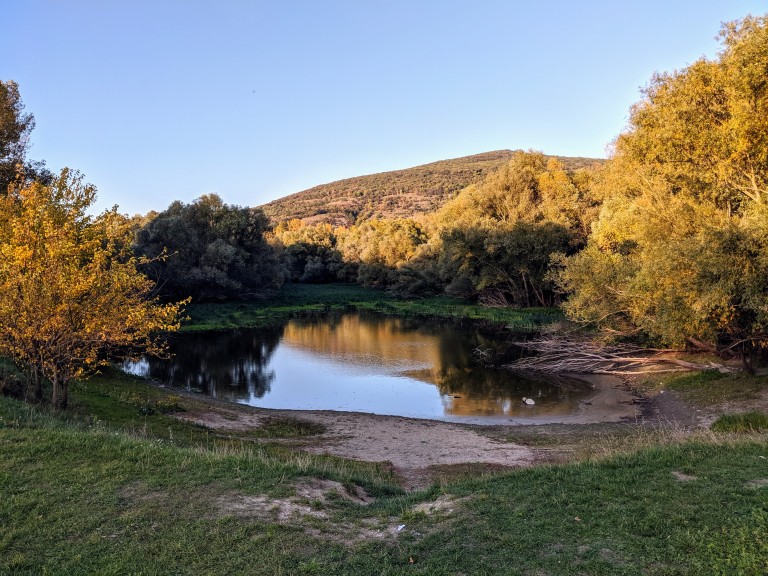 There’s another monument on this path as well. An abstract rusted iron, nested rectangles thingy. Like the Gate of Freedom, it is also commemorating the Iron Curtain. 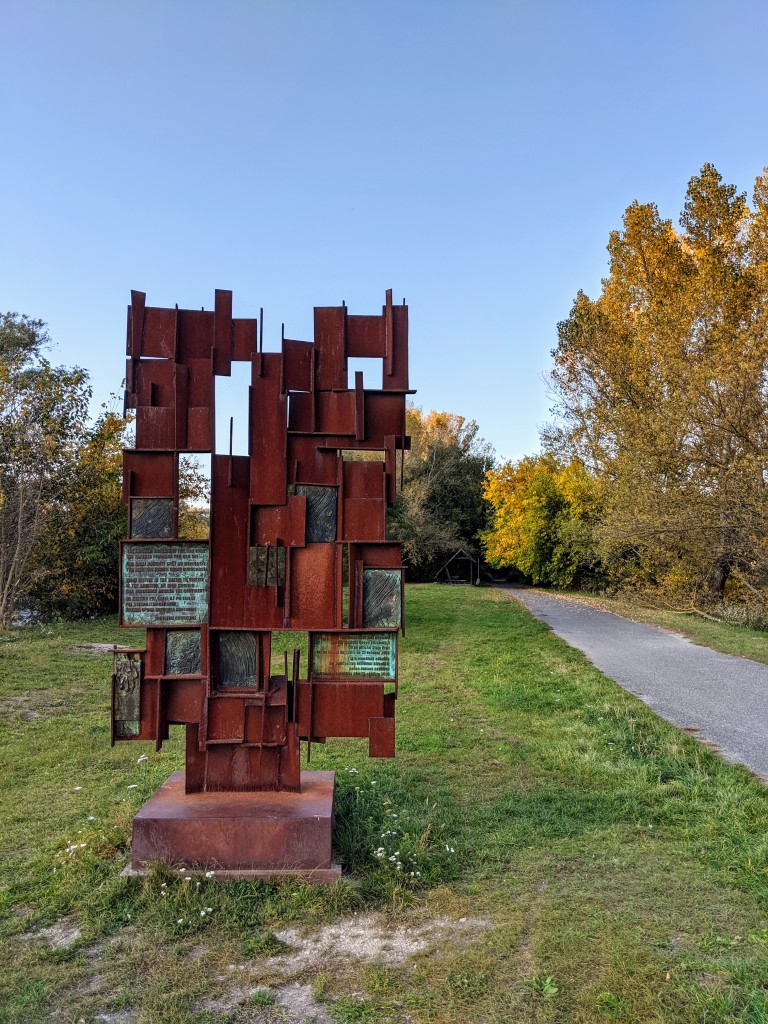 The plaque says it was unveiled here during a visit from Queen Elizabeth II. A workers glove is plastered into the piece and looks like a mistake. There are two quotes from Churchill etched on it, “The farther backward you can look the farther forward you can see” and “From Stettin in the Baltic to Trieste in the Adriatic, an Iron Curtain has descended across the continent.” 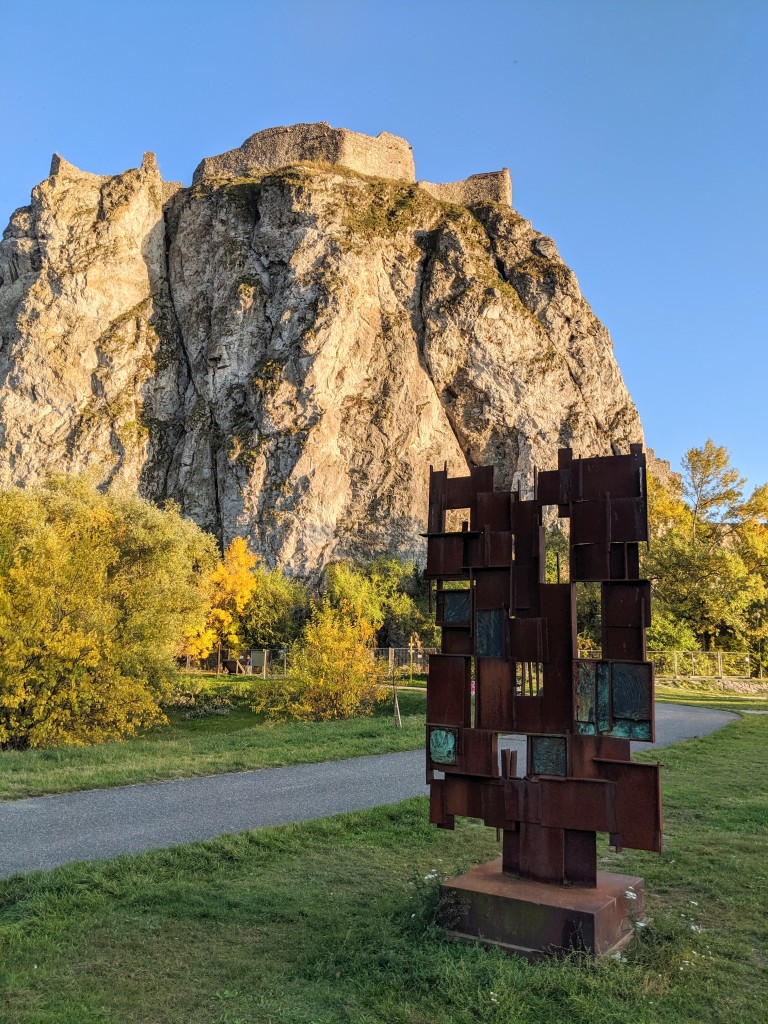 Well that all worked out pretty well. I think it’s time for a castle beer. I walk back passed the Devin Castle gates to the beer gardens I saw off the parking lot 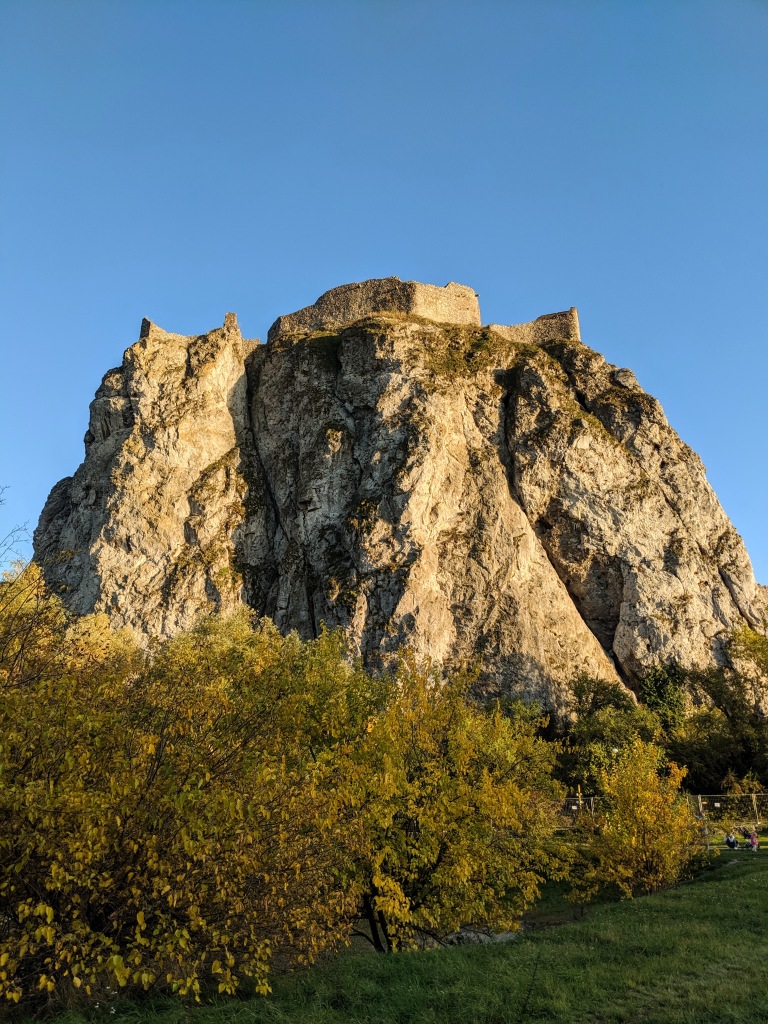 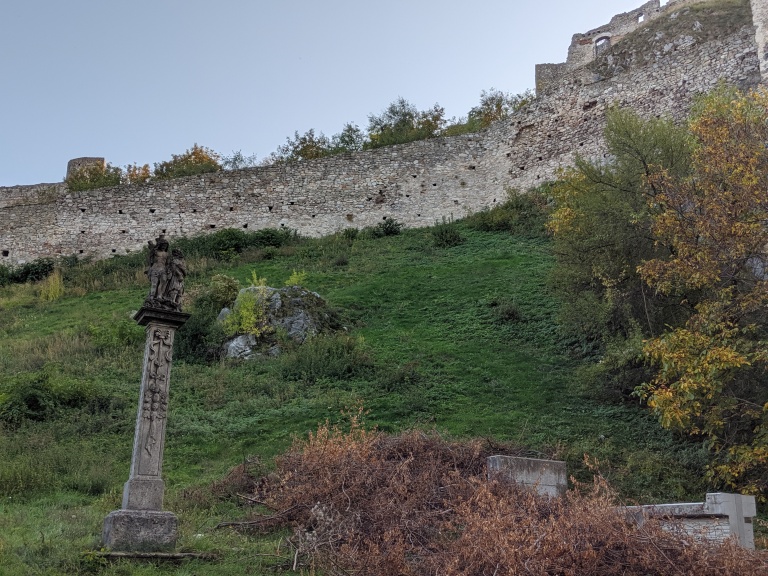 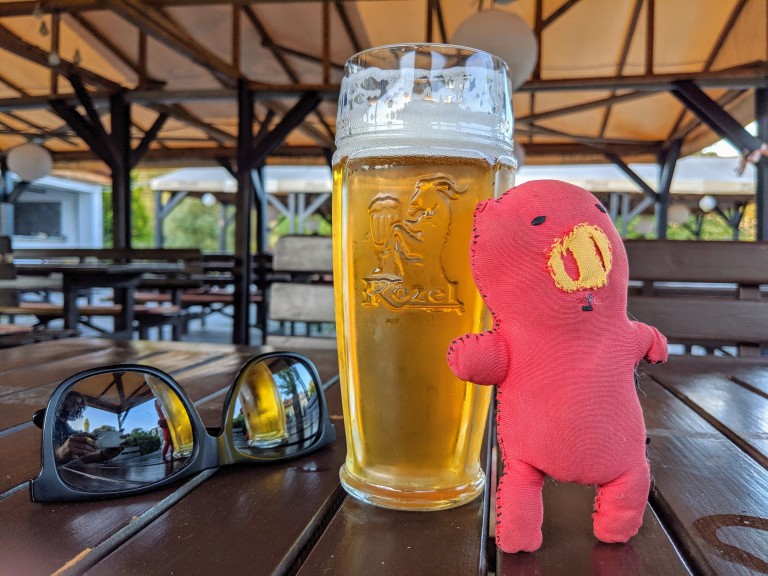 Alright I think two is enough. I don’t wanna be heading home in the dark. I pay up and take off back to the bus. Stop for one last look at Devin Castle. Beautiful. 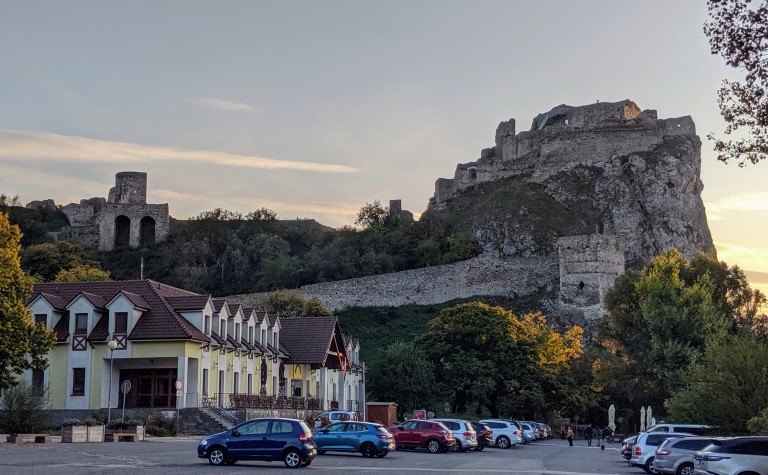 I take the same path through the buildings back to the bus stop. There are some cute houses in this town. 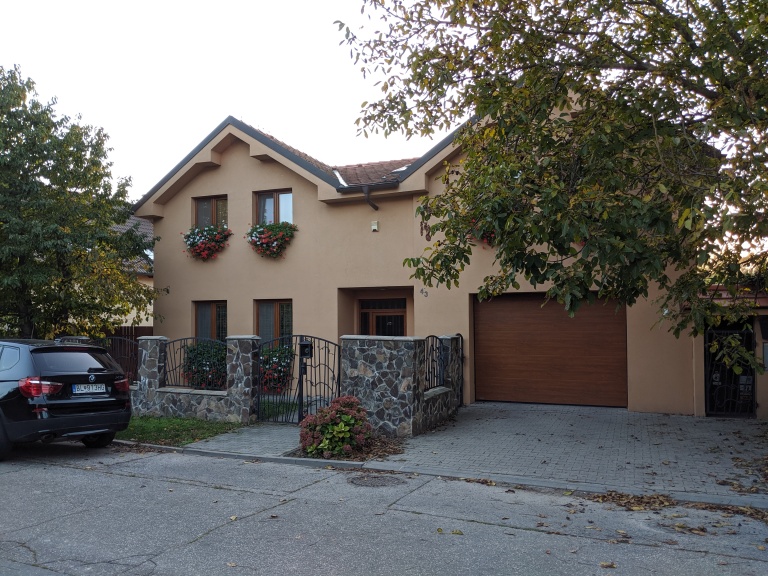 Hmmmm the bus is late. Hope they’re still running. I hadn’t thought about that. Waiting…. waiting… ah fuck, there it is.

At one of the stops on the way back into town I recognize an older gentleman that had also been on my bus ride on the way over here. He’s getting back on while what must be his Daughter and Grand Daughter are enthusiastically waving at him through the window. He’s super happy, smiling ear to ear waving back at them. Blowing kisses as the bus pulls away.

The bus pulls into downtown Bratislava and I’m back below the castle. Alright. Let’s try no directions back to Hostel Blues. I’ve walked all over this city a few times now, I don’t even think I need directions, just start walking. Yep, no problem. And way faster. Let’s see how McBurger’s lameass nap is going.