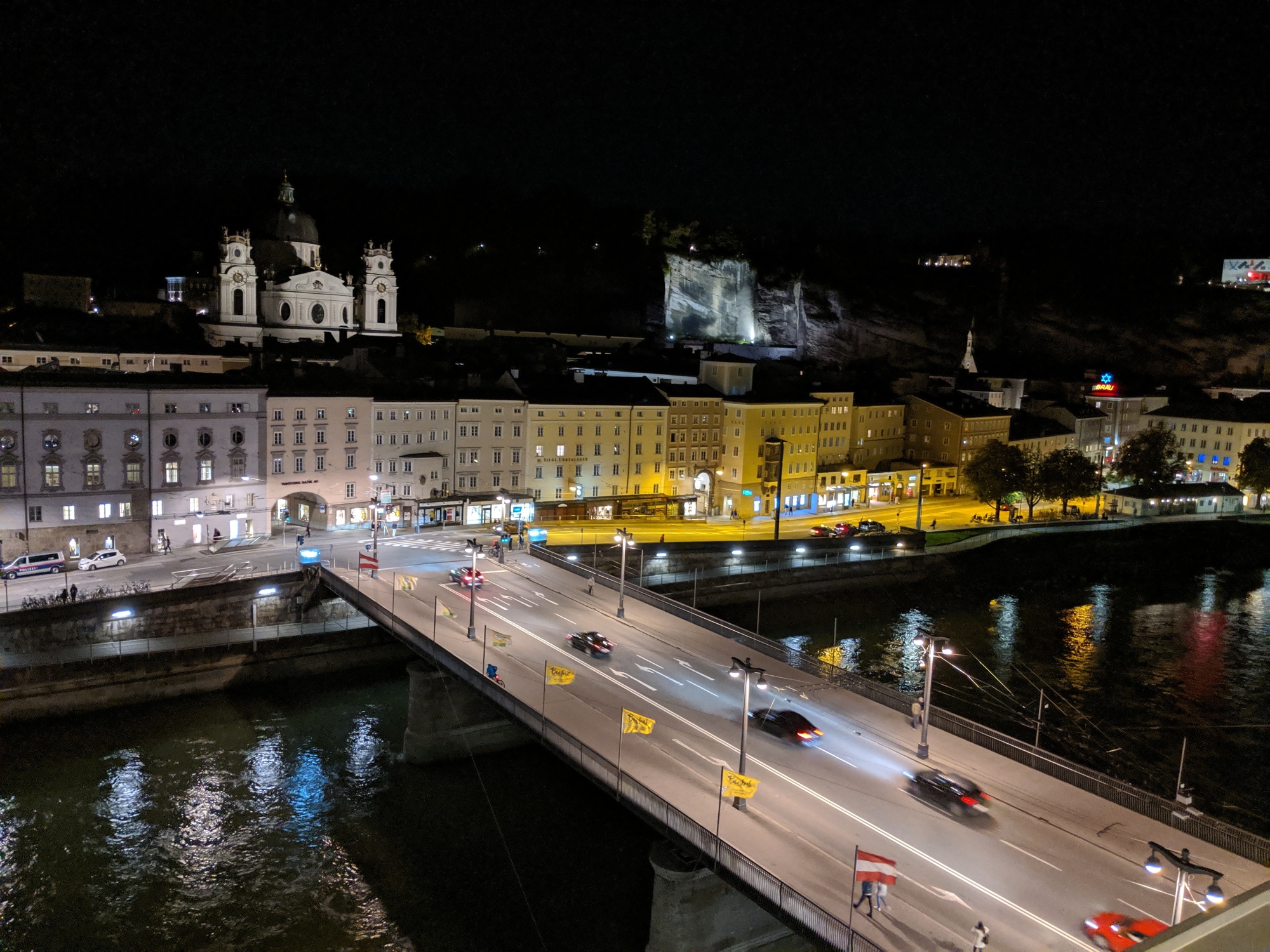 “Alright we gonna find this Saloon or what?”, “Well Oogie is leaving tomorrow, it’d be a shame if all he saw of Salzburg is the Tractor District”, “True, should we head downtown then?”, “Ya, let’s do it. We’ll take the Saloon case later.”

We start walking towards the river and castle that demark Salzburg’s badass area. We’re keeping our eyes peeled for cabs but like the walk to Turnerwirt there’s not much luck to be had. Oogie stops walking suddenly, “You guys wanna just take an Uber?”, “Wha? Your Uber is working?”, “Yep, totally works”, “What the hell?” I pull my app back up, nothing still, ‘Not available in your area’. Hmmmm, maybe reset the phone. “Yeah, of course, let’s get a ride.”

Our pick up location is directly across the street from a strip club. The dude’s nav system is showing all sorts of crazy routes curling like wet string on a map. He keeps swiping them away and just taking whatever streets he pleases. Pretty sure he goes down a few one way streets in the wrong direction. We get dropped off at the bridge by the river looking up at the 11th century fortress Hohensalzburg. 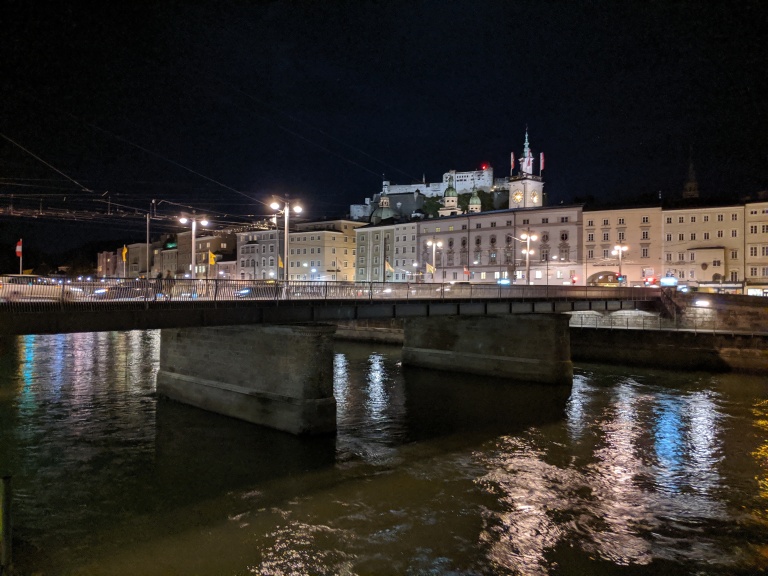 Having some serious flashbacks now. MacKay and I tore it up last time we were here. Had some decent goulash at the Stiegl cellars just under the fortress before going up for a tour of the complex. Then we gooned up and met a bunch of people at a bar who wanted us to stay at their parents place for a metal festival the coming weekend. “Should we try to find that same bar as last time?”, “That was fun. I remember it being right at the base of the cliff.”

We cross the bridge and enter the cobblestone alleys of old Salzburg. The shops seem to have gone up a few degrees of expense since last time I was here. That tourism money has transformed this area into a primp and posh mall of sorts. Don’t really like that. All the patios are folded up and vacant too. Restaurants and bars are totally empty or closed. Hmmm don’t really like that either. What’s going on? We are the only people out and about. This is so weird. It’s Friday. “Where is everybody?”, “This is seriously strange. Are we not supposed to be in here?”

We find the same area we got gooned at last time below the cliffs. There is a monument here that’s nicely lit. It’s a horse flood, or pferdeschwemme in German. 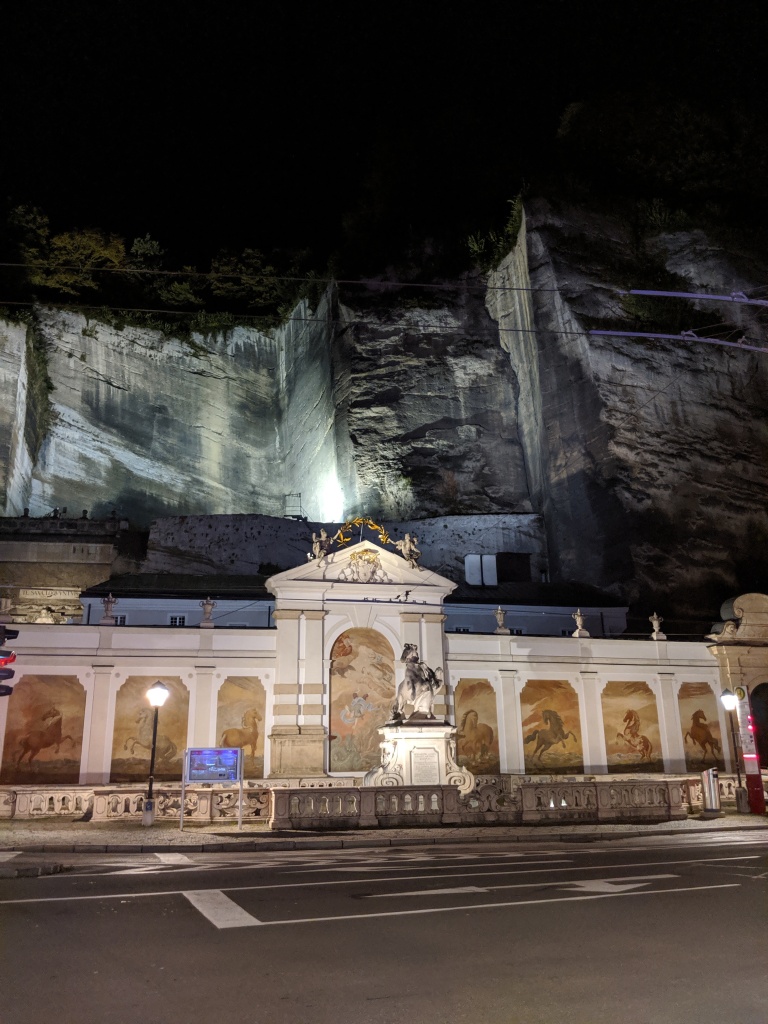 The dive bar we slammed last time looks like a trendy upscale joint now. It’s also closed. Man, we’re in Bizarroburg. Everything is reswanked to the uppities. And seriously, where is everyone? How is it this dead?

We walk around Deadburg and check out the various statues and Baroque cathedrals and whatnot. Still an astonishingly beautiful area. Kinda nice to have it to ourselves actually. 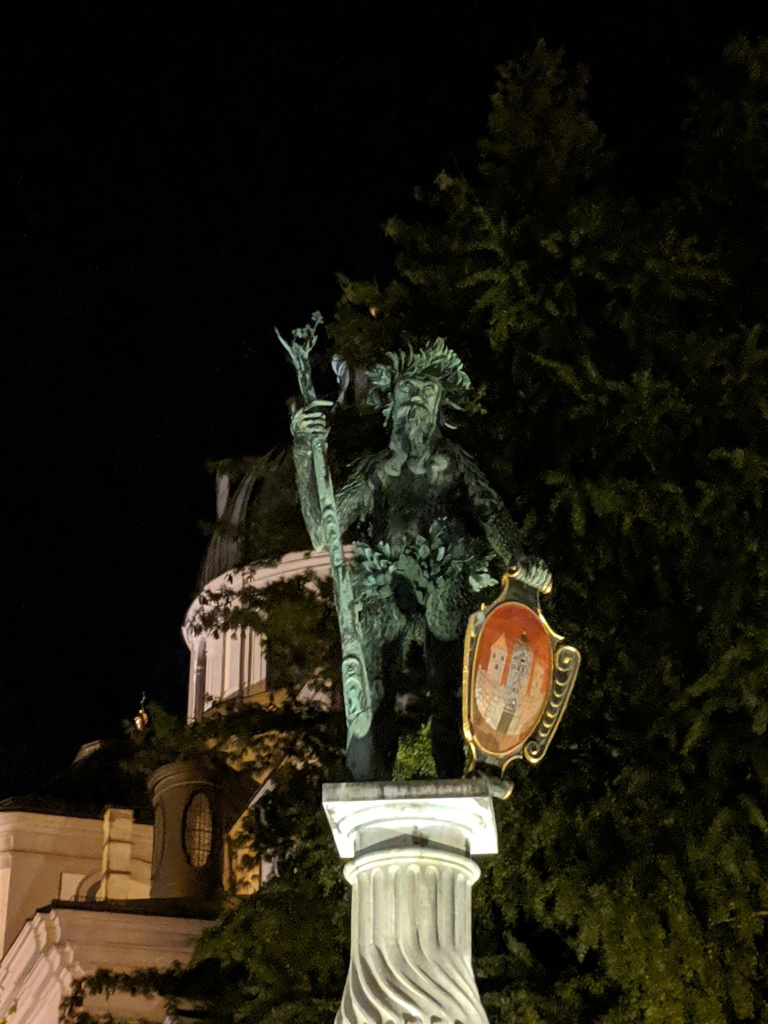 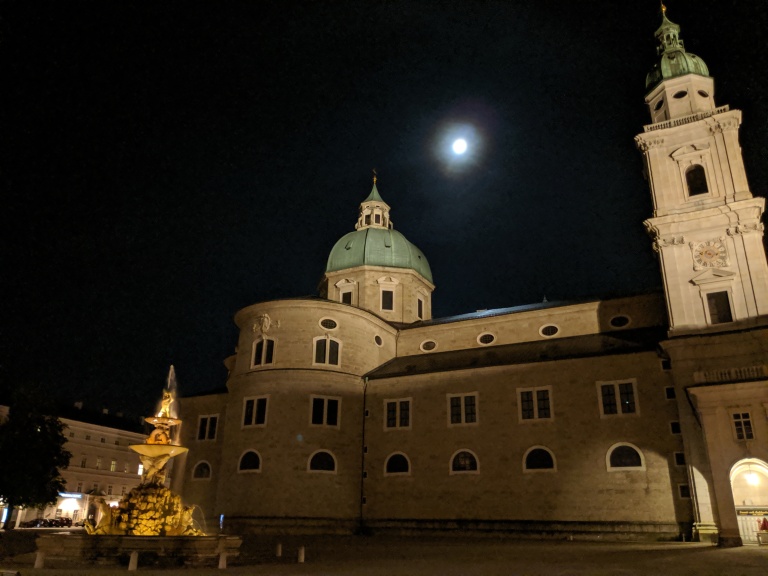 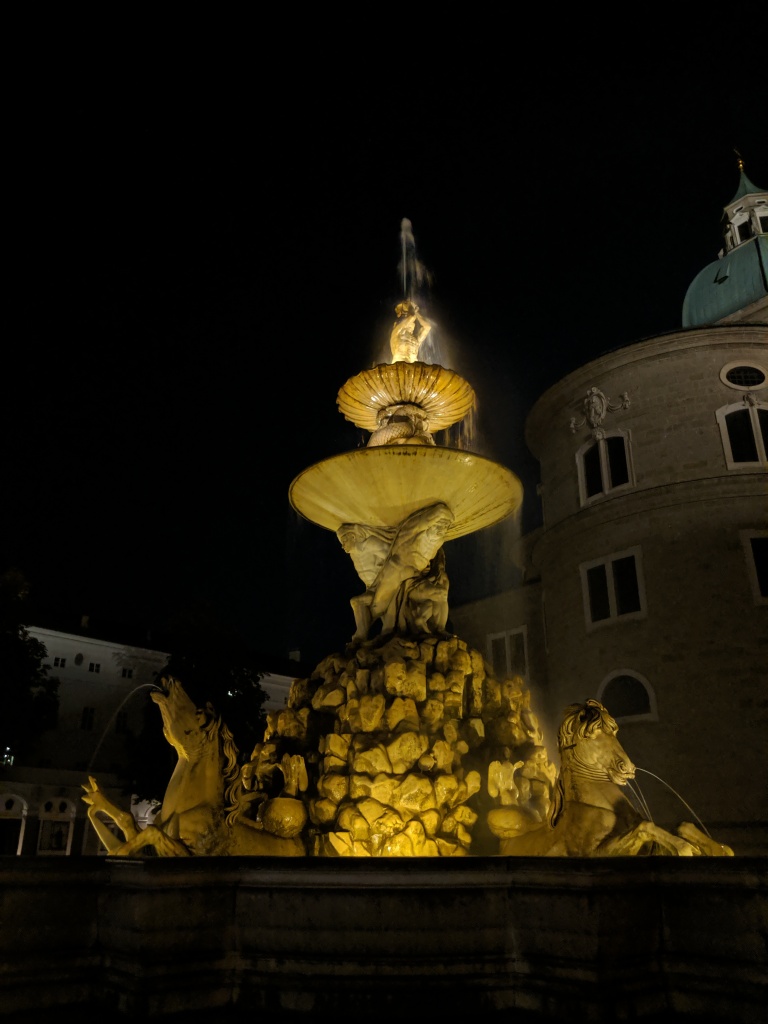 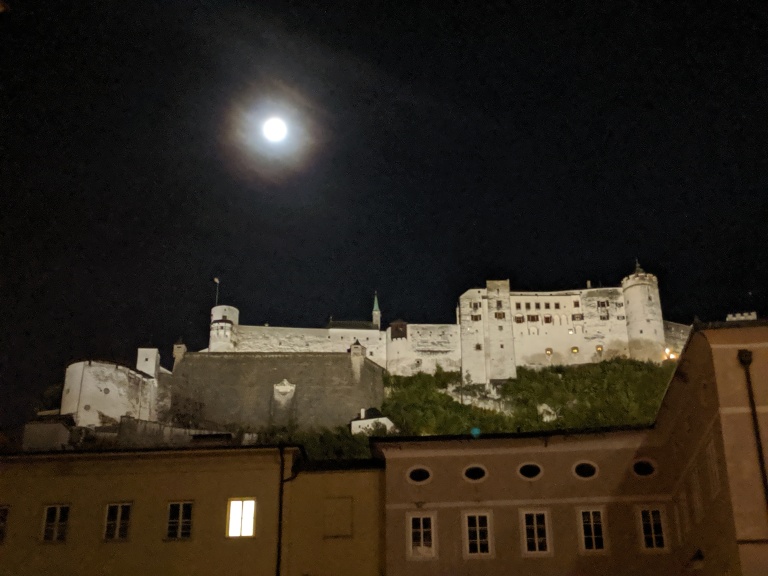 Looks like there’s an event happening here with artist vendors in the main square. Everything’s closed up for the night. We lurk around. 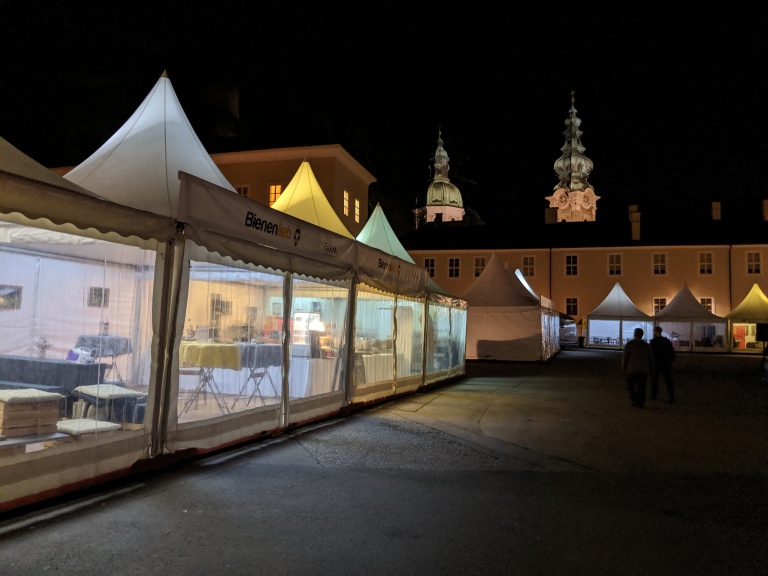 I remember getting a similar shot of the Fountain of Neptune reflection last time. That moon is super bright behind the fortress tonight. 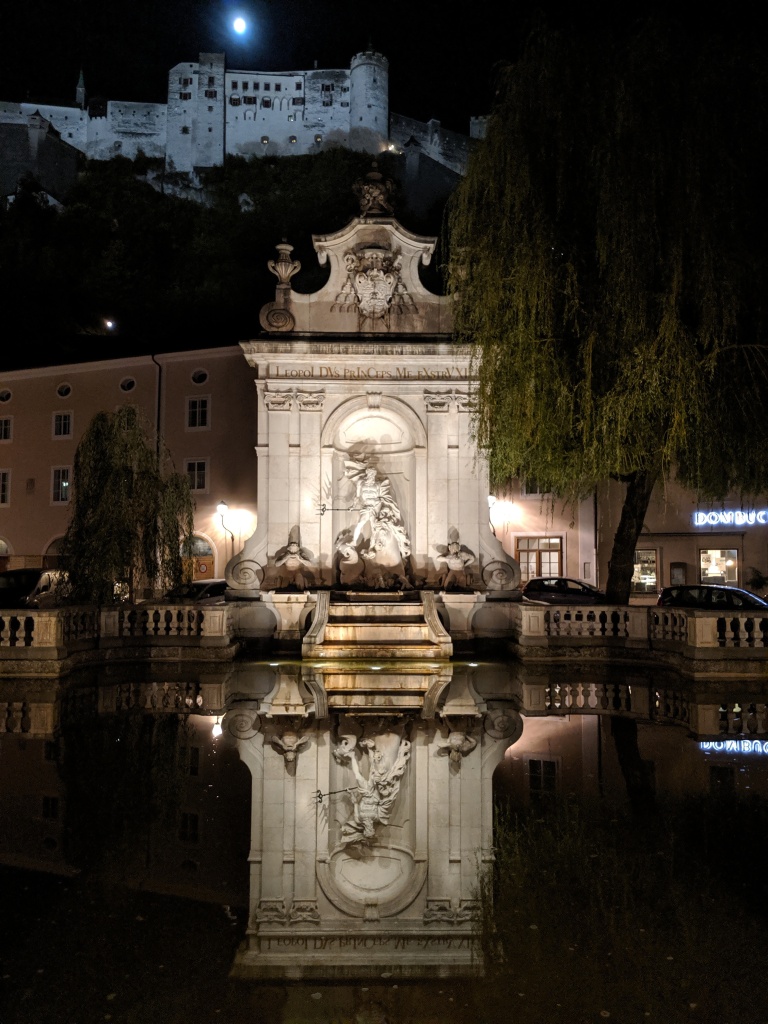 This guy did some stuff 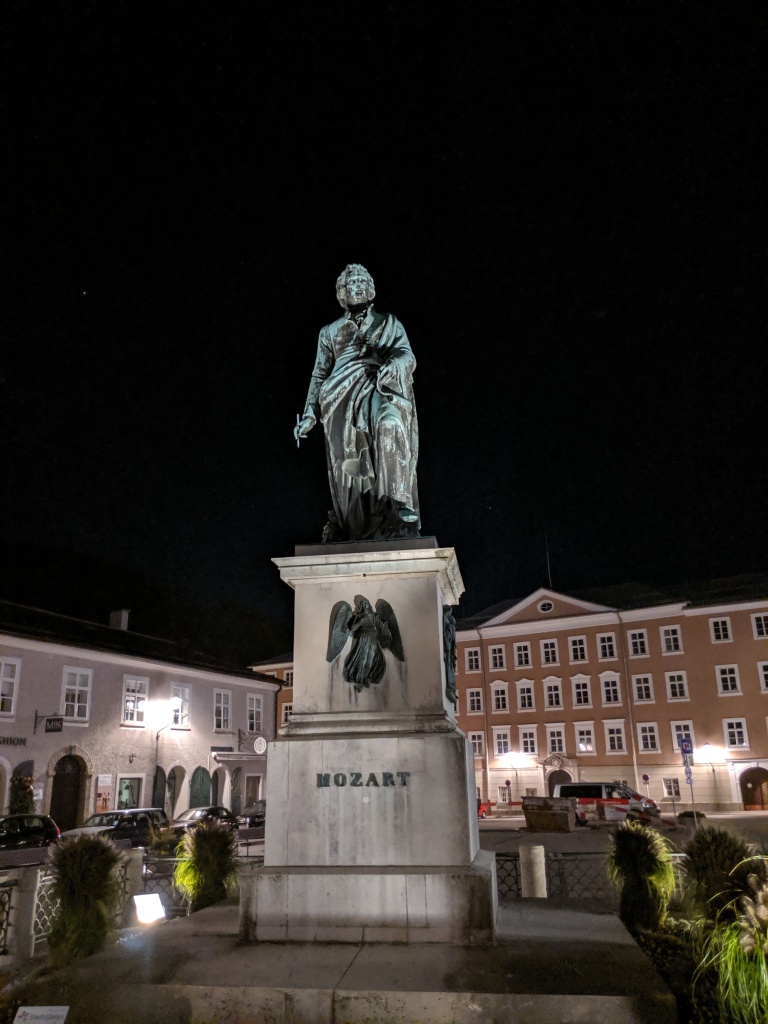 Alright well, absolutely nothing happening down here. Still cool to walk around the history here but our G&Ts are wearing off and we can’t seem to find a supplier in this area.

We go back across the bridge to Hotel Stein that I’d looked up before coming down here. It’s supposed to have a great view from the rooftop balcony. “Go up and get some 40 dollar drinks?”, “Let’s take a look.”

This place is super swank. We definitely don’t fit the part. We inquire at the front desk about the rooftop and he points to a corridor that leads to the elevator. Thank-you, sir.

Up the elevator to the roof and we see a sliding door to the balcony. Nice. View does look good. We go give it a try but it appears to be locked. A tuxedo’d server sees our attempt and comes over to help out. He opens the door and slides it open with a gracious gesture to go through. “Thank-you!”

The patio is great. It’s a softly lit, slickly modern and minimalist comfy section. As advertised, the view across the river to the fortress is fabulous. 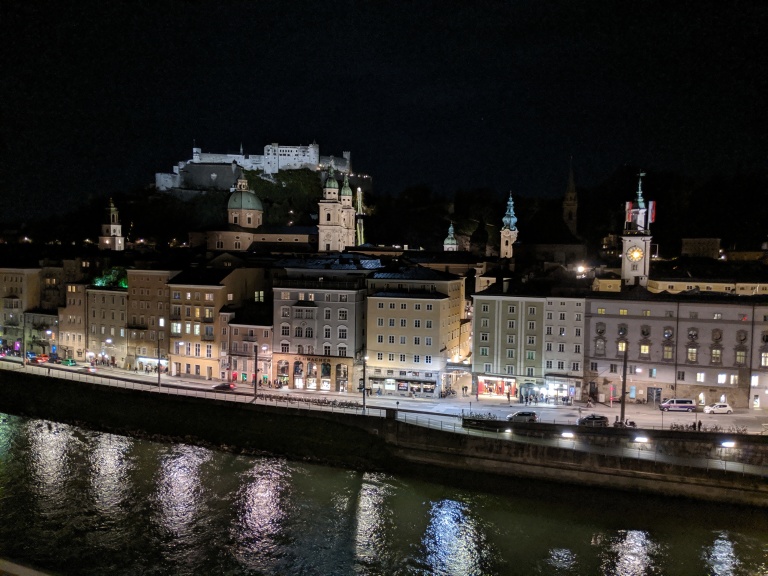 So is the view towards the.. what was that awesome word.. Pferdeschwemme! 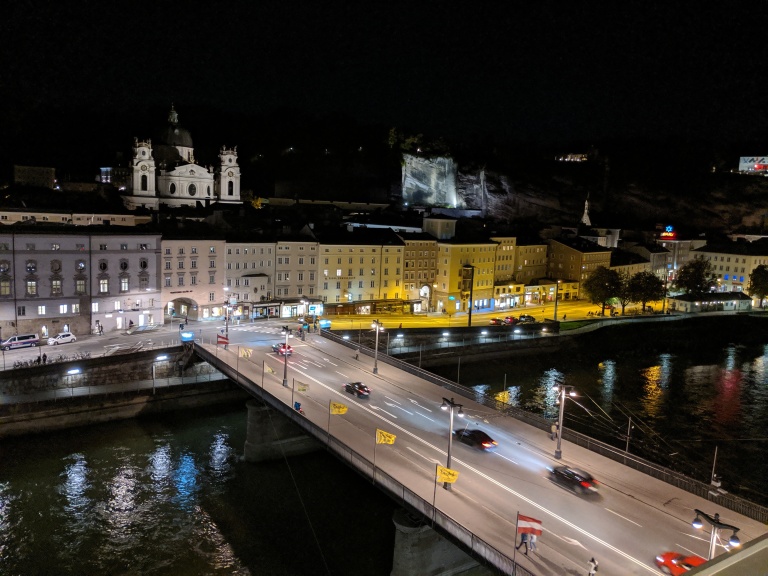 Doesn’t seem like anyone is going to come out to take our drink order. MacKay goes in to regulate. There’s a schmancy bar inside harboring a handful of stuffy types in business suits and cocktail dresses. Oogie and I watch MacKay trudge in wearing his TUK hoody and cargo pants. People’s heads are turning as he goes by. He’s completely dgaf oblivious. “That fucking guy just doesn’t care does he?”, “Nope.”

MacKay comes back to report that they’re only serving drinks inside. “The patio is actually closed, they were just being nice and letting the vagrants out”, “You guys wanna get a drink?”, “Not really, no. Not here anyways”, “Fair enough, let’s bounce.”

We go back down to street level and spot a docked boat that looks like it has a bar on it in the distance passed the other bridge. “Go check it out?”, “Sure. That’s the love bridge with all the padlocks on it”, “Wha?”, “People get engaged on the bridge and then put up a padlock.” 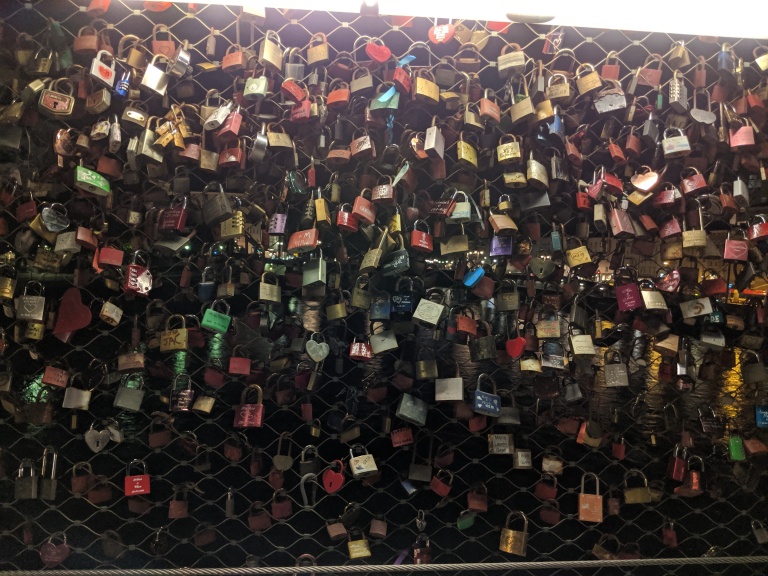 Cross the Love Bridge to the boat but there are exactly zero people in there. “I think it’s official. Everyone in Salzburg has disappeared”, “So weird man”, “Go back and follow the lead on that Country Saloon?”, “Might as well, eh?”

We break out the Uber and get the exact same dude we had before. He does some more illegal maneuvers and drops us off at Turnerwirt again. We follow Thick Glasses’ directions down the street, right, and three streets down. We can hear some music from an old wooden building. We open the gate from the inside latch like she’d said and go up to the door and knock. The face plate slides right and someone looks out. The door opens and we’re in.

This place is cool. Like the interior of an old barn with all sorts of found objects and flags all over the place. Just on the left inside the door is a giant Canadian flag behind a table. They’re blaring old time classics and everyone is singing along. Heads tilted back, just sending it, “Leaving on a jet plane! Don’t know when I’ll be back again….” Big beer steins and everyone is in a stellar mood. Thick Glasses was on to something here. Half the people in here are smoking cigs too.

Only problem is, there is absolutely no place to sit. Everyone in all of Salzburg is currently in this tiny bar and there is no where to go. It’s literally elbow to elbow. We push through a little bit because more people come in behind us and we have to try and find some room for them. But there really isn’t any. I’m stepping on people’s feet and accidentally rubbing against people trying to get by. Always touching at least three people, it’s that packed. The front row of Sahara tent is less crammed than this. Guess they don’t have fire codes in Salzburg. It is hot as balls in here too. Instantly sweating. Sheeeesh

I squeeze my way through the throng and angle a stance towards the bar. MacKay and Oogie are slowly trying to get through over to where I’m at. Their faces say it all though. This really isn’t enjoyable. Maybe if we had gotten here hours earlier and claimed a good seat to chill in. But now it’s just a mess. And I’m thinking it’s gonna be a while before we get served. Then a while for the next too. It’s also so loud in here we can’t even hear each other talk. “Abort?”, MacKay’s crowd rage is definitely at whistling kettle point, “For sure. Fuck this noise.”

Alright, good try Country Saloon. We edge our way back out. Coming out of the door back into the cool fresh air outside is wonderful. Ahhhhh. Wow. Seemed like a wicked place, but really not feeling its current state.

We look around the area for a place to nab some road rockets or hotel night caps but fail on that front too. Ok, not really our night, Salzburg. But I still love you.

We get back to the Turnerwirt ‘villa’ and everyone collapses on their respective beds. My clothes reek of smoke. Hoody smells like shit. That sucks.

MacKay flicks on the tele and starts scouting. He pauses on an old, shitty/hilarious looking movie. There are a handful of large breasted barbarian woman being held captive by a group of evil ninjas. One of the girls is being forced to duel. “Leave it, leave it. This has to be good.”

Yes! It’s so baaaaad. So so bad. Which makes it good. Well maybe not good, but entertaining. These barbarian girls have invaded an island or something. There’s an evil organization type guy in a red cloak with a python. He’s watching from a 1970s computer control panel with bullshit lights and switches like in the first James Bond movies. But way cheaper production. The girl wins the duel, unties her companions and they infiltrate the base. One of their agents is already inside. Oh no! She’s been discovered. She gets roughed up. There’s a gorilla jumping around. Snakes go across her tits. The bad guy just ripped his face off to reveal a black skull. His ultimate weapon is a laser mini-tank that looks like a cock and balls wearing a condom… “Oh.my.god. What the fuck is this?!”

I try to google it. Found it! The Lost Empire. Here’s a clip.

We watch the rest of this gem, laughing in the hotel room. With no where to go but down from here, we call it a night. Nice random evening, Salzburg. Thanks for that.