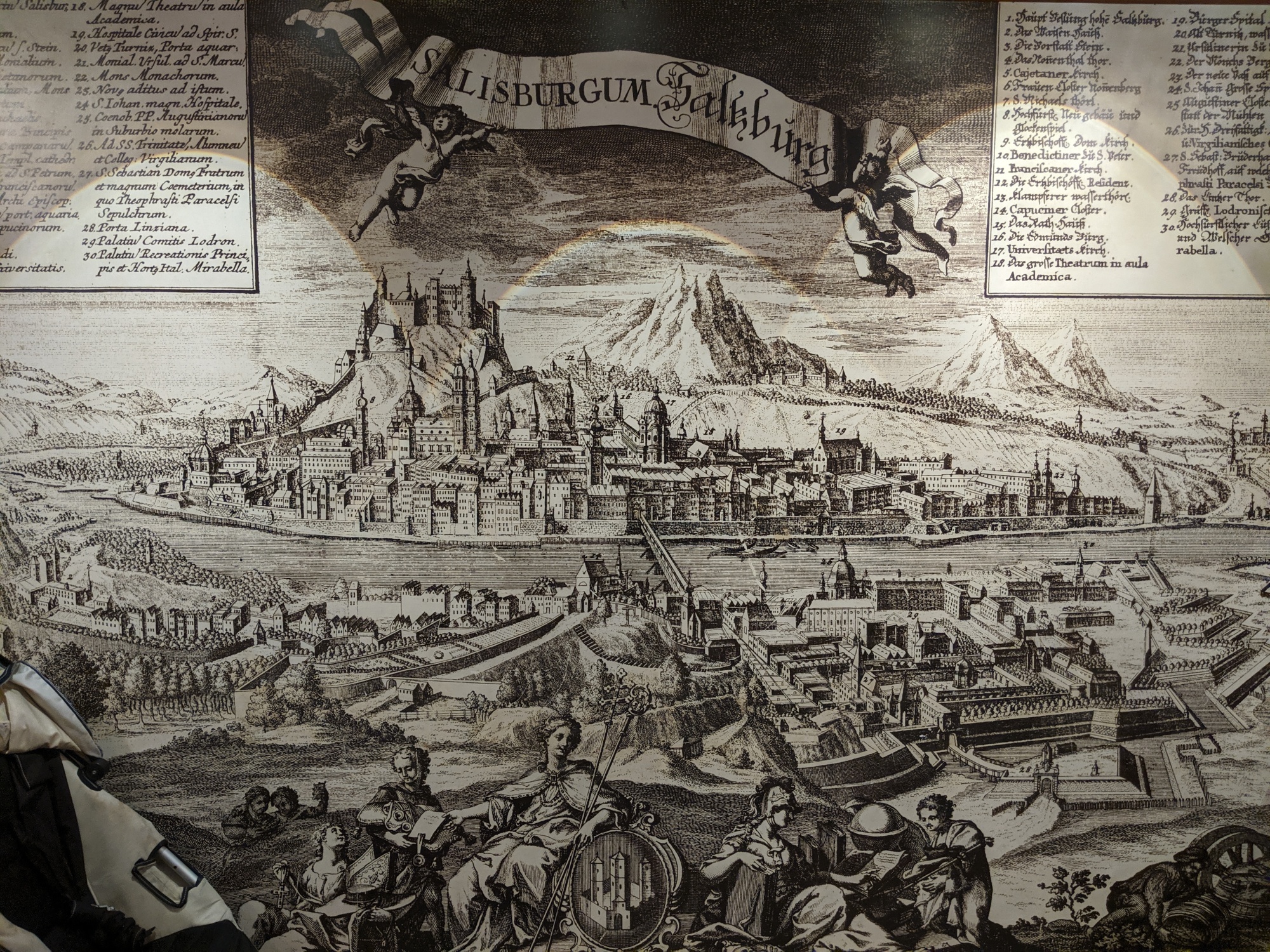 We get to the Innsbruck station and the train is 137 euros to Salzburg. Faaaaaawk me. It’s only 2 hours from here. Guess these two places are popular. We check on the bus and it’s 87 bucks which is mildly better but it takes over 6 hours. Ahhhh shit. “Sooo Austria is expensive, eh? I miss Latvia prices.”, “Yeah, let’s get out asap.”

The train to Salzburg pulls in and there are a lot of people waiting to get on. I do a quick recon as it’s coming to a stop, jump the right car and somehow score one of the two tables with four seats in the dining car. I tell other passengers that the seats are taken, pointing back to the other guys. We get situated. McBurger’s BSB is taking up the seat while he’s hitting the head and an Austrian girl really wants to sit with us as there are no other seats. I stuff his bag under the table with some effort to make room for her.

The Austrian girl speaks English but is super timid and mousy, doesn’t seem like the talkative type. She does listen to every inane word we say though and her eyes indicate that she mostly understands. Maybe she’s a spy?

The scenery between Innsbruck and Salzburg is expectedly spectacular. Rolling hills cascade into rising mountains, plush forests beside wide rivers and lakes. Random castles in the mountains. Fields of sunflowers. Oogie is getting into travelling by train, “Man, this is a super relaxing way to travel”, “Would you say it’s Rail-axing?”, “No. No, I would not say that. I hope that nobody says it like that.”

We have a few pints on the way and look into places to crash. Hostels seem booked up for some reason and hotels in the city are super expensive. Damn. Maybe there’s an event in the city or something. Maybe it’s always like that. MacKay finally finds a place called Turnerwirt that isn’t too bad a price. “It’s right by the train station”, “Good enough for me.”

Oogie gets a sausage plate. It comes out as basically a hotdog and a roll with some mustard. Despite the lackluster presentation it’s surprisingly good. 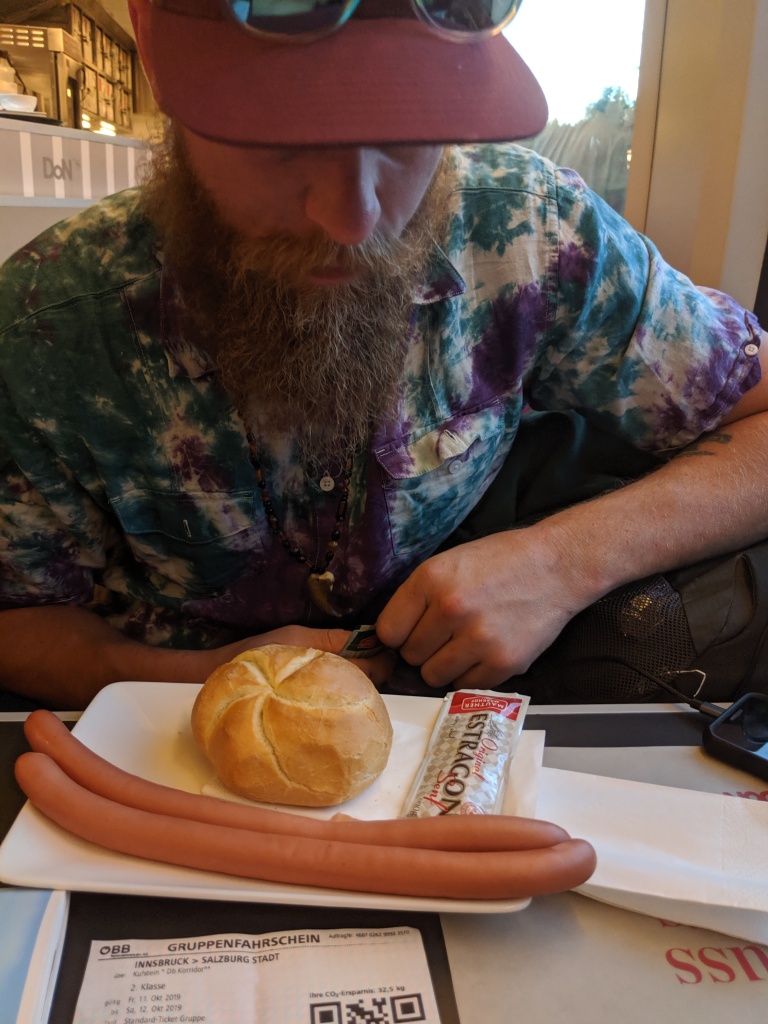 We pull into Salzburg in the evening, grab our bags and get our bearings. We come out to the street and directions are sending us down a long tunnel with hardly any sidewalk to walk on. “Fuck that tunnel, let’s go up to the next major street.” This of course sends us on a giant elbow route 20 minutes out of our way to basically get back to the other side of the tunnel that would have taken 3 minutes to walk through. “Fuck that tunnel?”, “Yeah! Some glad we didn’t walk through there.” We look up the place again and it’s still 25 minutes away. Ahhggg

“I thought you said it was by the train station”, “Well.. it is by a train station”, “Just not this train station…”, “No.” I pull up Uber and take a look. Shit. Doesn’t seem to be working. Salzburg doesn’t have Uber? Seems weird. “Let’s just hoof it, see if we find a cab on the way.”

Long, annoying story short, we don’t find a cab at all and the walk leads away from the cool, scenic part of town into the industrial, shit part of town. It’s also all on a gradual uphill incline and slightly sketchy. For 30+ more minutes.

“I’m glad we brought Eugene to Salzburg so we could show him the Tractor District”, “Ya, brilliant. Hey Oogie, welcome to Salzburg’s Armpit”, “I swear this is a cool city dude. We’re just gonna walk a half hour away from anything remotely cool, if that’s cool with you”, “Sure. Seriously though. There are a lot of nice tractors for sale here.”

MacKay points at a sign, “Ha, we’re so far out that there’s camping over there”, “Well, as punishment for booking this place we’re gonna make you sleep there”, “That actually sounds alright to me”, “Yeah, I regretted it as soon as I said it haha.”

We finally get to the Turnerwirt with a good sheen of sweat going. It’s an old fashioned looking spot with a large, riveted wooden door. There’s an interesting looking local pub next door, actually.

We go inside and up to the front desk where two older ladies are waiting smiling at us. One says something to us in German and we reply, “I’m sorry. Do you speak English”, and she says, “No” points to the other lady and says with a smile, “But, she speaks English”, “Haha ok.”

The other lady is a sweet old gam gam type. She gets us situated with a room key and tells us our room is in the villa around the side. Ok, thanks.

There’s this great old black and white artists rendition of Salzburg in the foyer.

Back outside and around the corner is the ‘Villa’. Looks fancy. “There’s a massage place in here?”, “And a pool?”

We get up to our room and it’s a simple three bed set up with a nice bathroom. We collectively take a load off after walking for the past hour and take turns getting cleaned up.

“You guys hungry?”, “Ya, getting there”, “Wanna just try that local spot next door?”, “For sure. Probably some interesting folks in there. I think the sign said home-style or something”, “I’m down to do Tractor District grub.”

We mosey over to the locals spot. “Is it called Gnigler Stub’n?”, “Ha guess so.” We open the front door into a smokey bar area that is completely full of people. As expected it is entirely locals, entirely middle aged, entirely wasted, and wow do we ever stand out. They’re all rocking your grandparents clothes, drinking steins, and laughing. Some are singing. You’d be hard pressed to paint a more stereotypical Austrian picture than this.

If there was a record player in the room it would have screeched to a halt when we walked in. Lot of funny looks. Lots of confused looks too. A couple stink eyes, a couple raised glasses, and some outright laughter. The bartender feels totally out of place. 30 years younger than everyone and looks like a Barbie doll. There are absolutely no seats available in the bar area and she motions to the side where it looks like there’s a glass enclosed dining room. Ahhh non-smoking area, ya that looks great right now. I can chew the air in here.

We take a seat and she comes over with some menus. She’s slightly bashful but speaks English well, “Drinks first?”, “I’ll do a double gin and tonic, please”, “Double?”, “Yes please. Two shots of gin. At least haha”, “Ok, and you?”, “I’ll do the exact same thing”, “Make it three please”, “Ok, easy.” She comes back with three collins glasses filled with gin, three bottles of tonic and a bowl of ice. Nice.

Glance over the menu and indeed it does seem like home cooked fare. Perfecto. We get a trio of dishes expecting to try everyone elses. We pound our drinks in no time. That was a long walk. Call Barbtender over for another round of the same travel medicine.

Plates come out and are looking nummy. I get a beef roast stew type thing with pasta. The sauce is deadly. Mix it all up narm narmzy 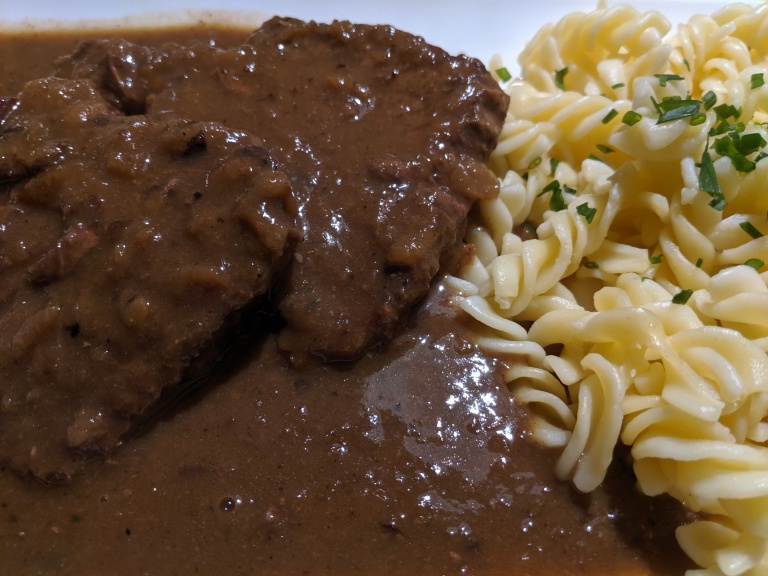 MacKay has some traditional bread dish in a stew.

And Oogie gets spikey sausages on fries. 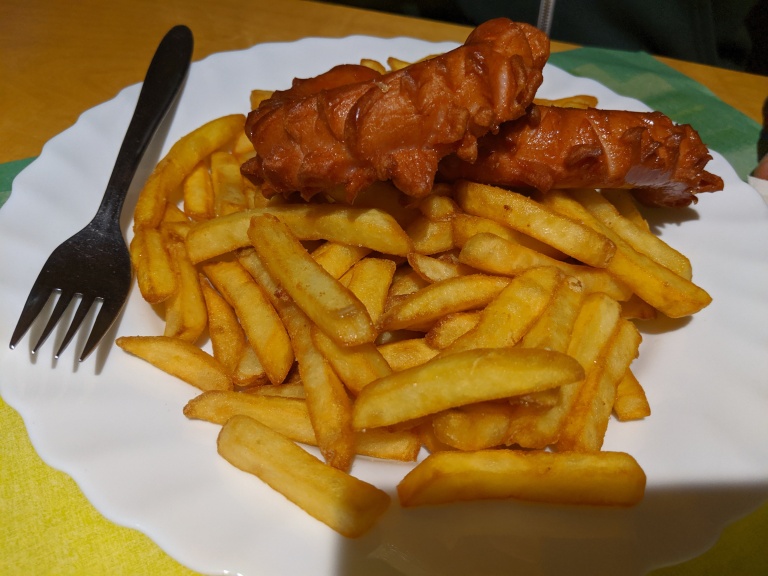 All the dishes are tasty and made with love. The owner comes over to see how we’re doing. We tell him everything is fantastic. He’s glad to hear it. Oh now here’s the cook too. Yeah, we loved it, thank you so much! Oh here’s the owners wife too. Yes yes everything is just great. Yep, travelling, Canadians and American, we’re having a wonderful time, thank-you. Haha these guys are being super hospitable.

We’re going for our forth round of dG&Ts when they clear things away. This whole time we’ve been getting side glances from everybody in the other room. They’re super curious about everything. What are we eating, what are we drinking, they just can’t stop looking over.

Our room with no one in it…

…their room with smokes and sing-a-longs 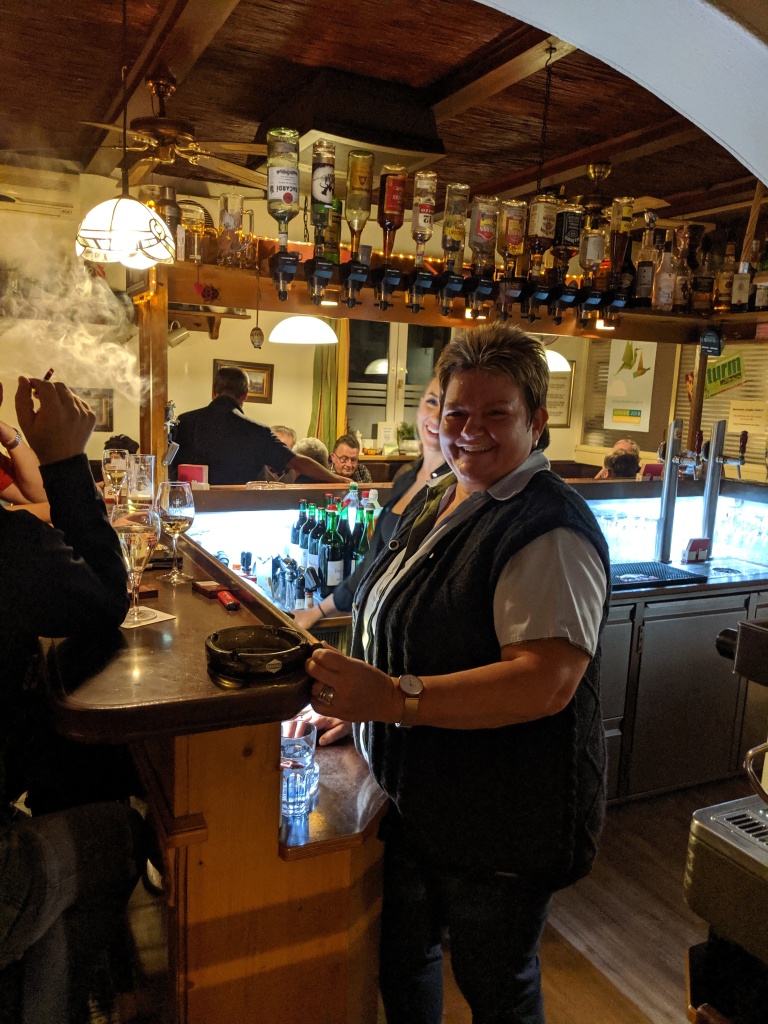 Done eating, we settle up and start making our way out. We come out of the glass partitioned section and everybody is instantly on us wanting to talk. Their curiosity has frothed over the top. Haha ok ok sure. I don’t think they get a lot of foreigners in this place.

One guy is lit out of his gourd and chain smoking. He grabs me by the shoulder, “You look like a musician. Am I right?”, “You caught me”, “I knew it. Guitar?”, “Yep, I can play guitar and keys. Some other things”, “Do you like the Beach Boys”, “Haha fuck yeah! Grew up on the Beach Boys!” And this dude, his name is Wolfgang, launches into Sloop John B and is hammering me on the chest with his fist in 4/4 urging me to sing a long with him. So I do, as best as I can remember the words. A couple other people across the bar have their pints raised and are into it too. Now we’re all howling, “I feel so broke up… I want to go home!”

A girl with thick glasses is sitting beside Wolfgang and me smoking and laughing at us (every single person in the room is smoking. Hard to believe this used to be a thing in North America. Clothes are going to reek. My hair will be nasty). She asks where we’re all from and we tell her. She says, “It is my dream to eat Taco Bell”, “Pfffft, that’s a funny life mission to have”, “We don’t have Taco Bell. I need to try it”, “I agree, you do. But then you need to get to Mexico and try real Mexican food. It’s the best!”, “Oh that would be lovely!”

Wolfgang tells me that he plays at this bar sometimes. Strums guitar and sings. “Where do you set up?”, “In the corner there. I play a lot of Creedence Clearwater”, “Oh that’s great” and now I’m getting thumped on the chest again but this time it’s Proud Mary. We’re belting it out, “Big wheel keep on turnin’, Proooooud Mary keep on burnin’. Rollin’.. rollin’.. rollin’ on the reeever!”

I ask the thick glasses girl if there are any other pubs in the area that are fun. She says she knows just the place. “It’s just one streets down, take a right and then three streets over. There is a gate that you can reach around and open. Then there’s a door outside with a slide cover. You have to knock and they will look out and see if you can come in”, “Sounds like a mission!”, “Yes, you will like it. There is a train that goes around the bar and it will bring you tequila”, “Wha? That’s awesome! What’s this place called?”, “The Country Saloon.”

We’re on the case…