A sound wakes me up in the morning. Ahhh what is that? Is that piano? Is there a mosquito playing a piano in here? Too hungover for this shit. One blurry eye opens to scan the scene. Sounds like a cell phone going off under the bottom bunk. Buzzing and a repetitive piano scale. Mospianito. Huh, forth bunk looks occupied. There’s an Indian dude in here? Where’d he come from? He’s out cold, not budging. The alarm runs it’s course and turns itself off. Ahh thank jeebuz.

A sound wakes me up. What is that? Piano? Is there a large mosquito playing piano? Ahh fuck it’s that Indian dudes cell phone again! I’m too comfy to get up! I try to scan with both eyes this time. Can’t locate it. No one else is waking up. It finishes. Fuck sakes.

Ok, I’m gonna smash that thing! Naahh I can’t be bothered to get out of bed. Getting off this top bunk is not happening. There’s no going back. That would mean I’m up and I’m not ready to be up. Seriously though, where’d this Indian guy come from? We got home at like 3 or something. The piano stops. Ahh nice…

Like a bad Groundhog Day / Westworld / Russian Doll segment, this cycle of piano buzzing annoyance and hungover indecision probably lasts for an hour before our new companion remedies the situation.

We start collectively moving at about thirty minutes passed check out time. We look and feel like shit. Did it again. Thanks Munich (and Ireland and Finland). And yeah, this Indian dude didn’t get ‘home’ until 4:30 from some club. He feels bad about the alarm. “I feel bad for you, man.” He’s actually in worse shape than anyone else.

I jump in the shower even though we’re late checking out. Start singing Personal Jesus in there thanks to our Tallinn Depeche Mode experience the other evening. Come out in a towel still singing  and Oogie is on it, “Pick up the receiver I’ll make you a believer. Yeah, that’s stuck in my head too”, “Maybe Munich has a Depeche Mode breakfast spot.”

We get downstairs to apologize and Jaeger’s front desk doesn’t mind at all that we’re late for check out. Their chill af. They tell us the lockers are free to use too, if we want to drop our bags and go exploring. Mind readers. That’s exactly what we wanna do. Jaeger’s Hostel turned out to be a really great place to crash.

I tell the boys that we should head towards Marienplatz and find some grub along the way. That’s the central square I remember from last time, I think they’ll dig it. We pull up directions and it’s only a 15 minute walk from the hostel. Perfect. Well, almost perfect, a few minutes in and it starts to rain. Oh right, there’s lots of construction going on too. Bit of an obstacle course.

We come to a major intersection and dip down an escalator towards the Metro to cross underground. Whoa.. there’s a massive underground mall here. Stachus-Einkaufszentrum? Tons of people milling about, shopping out of the rain and rushing to catch trains. Cool beans. We come back topside to this imposing castle gate-type structure that leads into a large open pedestrian zone.

The gate is called the Karlstor and has been around since the 13th century when Munich needed to construct a second walled ring around the city to accommodate it’s growth through the Middle Ages. It leads into another huge shopping area amidst all of these historic buildings. Beautiful and clean.

We pass by St Michael’s, a wonderful Renaissance church. 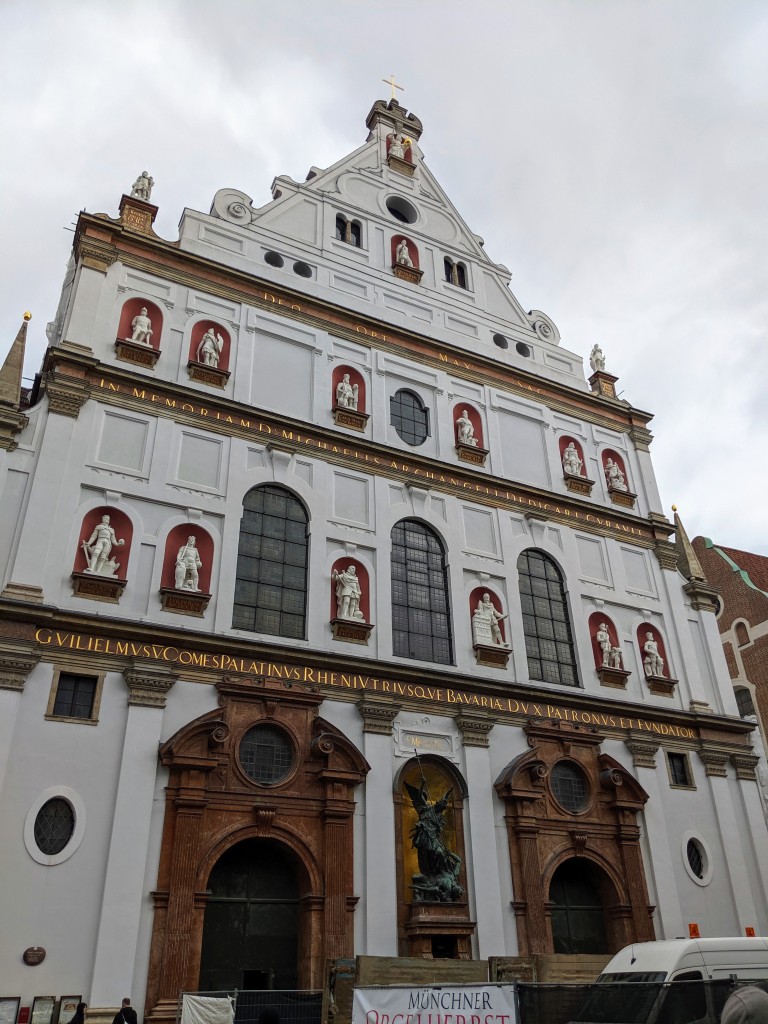 Great buildings in this area.

And out into Marienplatz where we see Neues Rathaus, the Neo-Gothic New Town Hall. Super cool. Kinda looks good against the imposing sky.

Yep. With it’s amazing mix of architecture through the ages, grand squares filled with history and modern flare, this is the Munich I remember loving from my last trip through here for Oktoberfest. 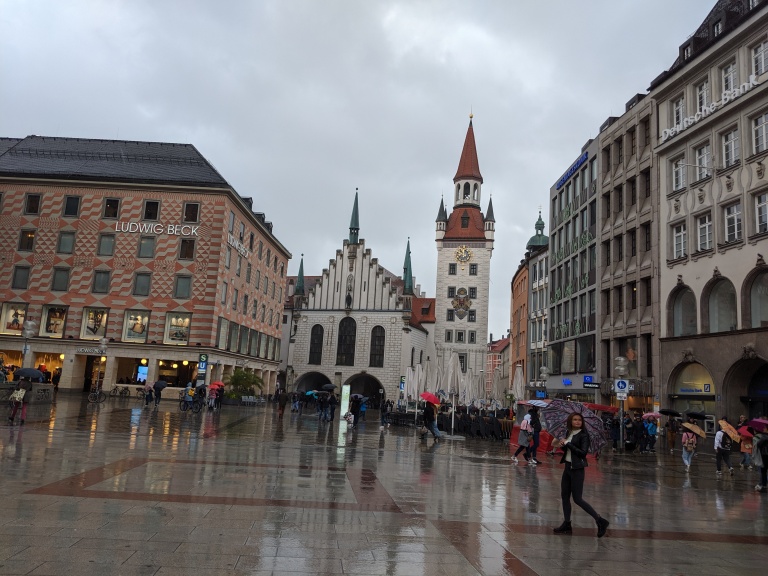 Now, I thought the Rat Cellar place was right here in the main square under the Gothic castle looking town hall thing. 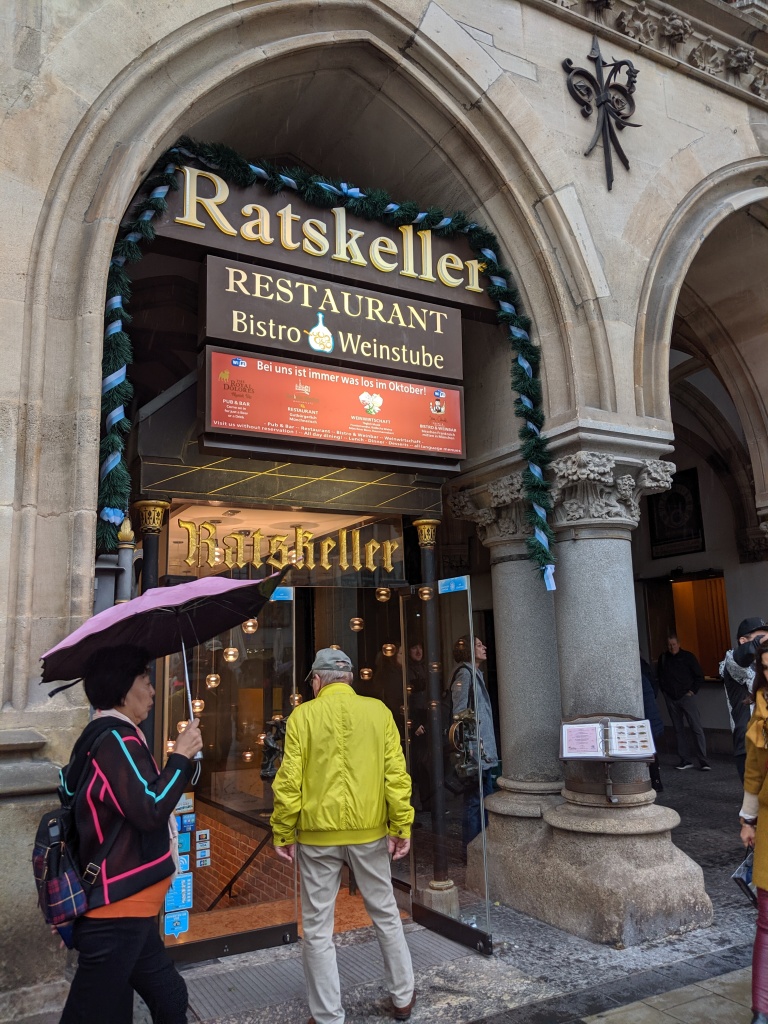 Let’s go see if it holds up to what I recall.. Bavarian Perfection.