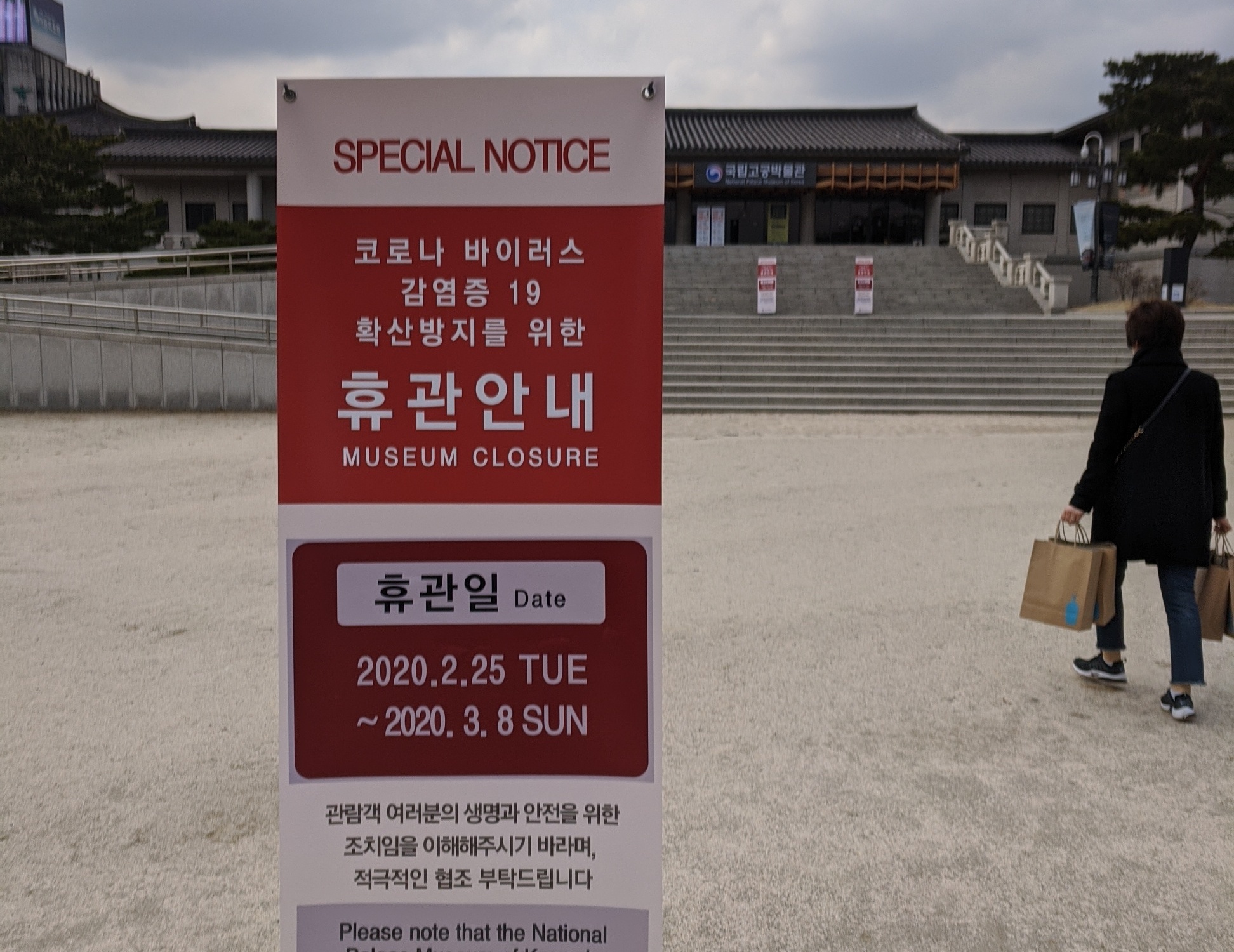 Since my last post I’ve been keeping a close eye on the situation here.  On one hand, the number of cases has risen rapidly – six days ago the known COVID-19 infection count was approximately 600, and now it sits just slightly below 3,000.

Last night while eating some 3 am bibimbap in the Shinchon rotary I saw an overnight newscast that put that count into context with a nice infographic – the vast majority of infections are still in Daegu and the surrounding environs, and the number of infections in the greater Seoul area sits at approximately 60.

Nonetheless, the impact is visible.  For the first time I’ve seen shortages of some types of food in the grocery stores, particularly instant noodles and bulk bags of rice:

Yes, there are still a lot of instant noodles left on those shelves, but the most delicious flavours are missing.  I’ve never seen that before.

At the same time I was grabbing some of the B-Team noodles, I saw an old fella rushing out with a huge case of soju (rice alcohol).  That guy knows what he’ll need to get through.

This is one of my stashes at home (I’ve got another shelf filled as well, along with a drawer full of dried fruit, a big tin of oatmeal, bags of granola, cans of baked beans and tomato soup): 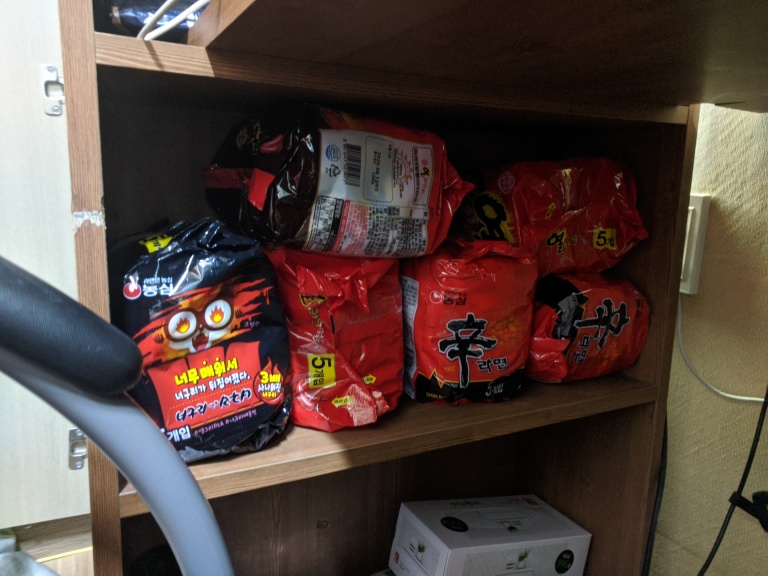 Being a huge city, there are a lot of places that could be considered the “heart”, but for me a good candidate is Gwanghwamun.  Technically, Gwanghwamun is the name of the south-facing gate of Gyeongbukgung, a 14th century palace that was mostly destroyed during Japanese occupation and since independence has slowly been reconstructed, but it’s more than just a scenic landmark.  The boulevard that leads to the gate includes statues of past kings, important city government buildings, the US embassy, a national arts centre, and museums.  Not far down the road are the offices of major national media outlets, banks, numerous other embassies, and Seoul city hall.

As a high-profile public space, it’s a popular place for protests.  In 2017 it was the scene of massive anti-government protests (some estimates put the number of protesters over a million) which I attended, while not far down the road – separated by phalanxes of police and numerous barricades – was a pro-government protest that I attended the day prior.  On virtually any given day there are small protests of a few dozen people representing various causes.

To get a pulse on the city, it’s a decent place to start, so I headed over to check it out.

Nothing really out of order here, perhaps slightly fewer protesters than usual.  The hi-viz vests are police, but they’re always here (there are more around the US embassy, out of view here).  In front of the Seoul government complex – the building behind King Sejong – there are a set of small tents and signs protesting North Korea and the perceived softness of the current government on that regime.  On an average day it’s not uncommon to see a couple dozen protesters, but on this day I counted two.  On the other side of the road, near the US embassy, you can often find a small number of anti-US protesters, but on this day I counted one.

Right:  Demolish the US military!

(Translations are very, very rough and could be inaccurate, but are probably close enough…)

At the entryway of the palace is a “changing of the guard” type thing.  Gyeongbukgung is popular among both Koreans and foreigners for dressing up in hanboks (traditional dresses), and a good number of people are doing just that:

Inside, the number of people is visibly less than usual, however.  Guided tours are cancelled and admission fees have been waived. 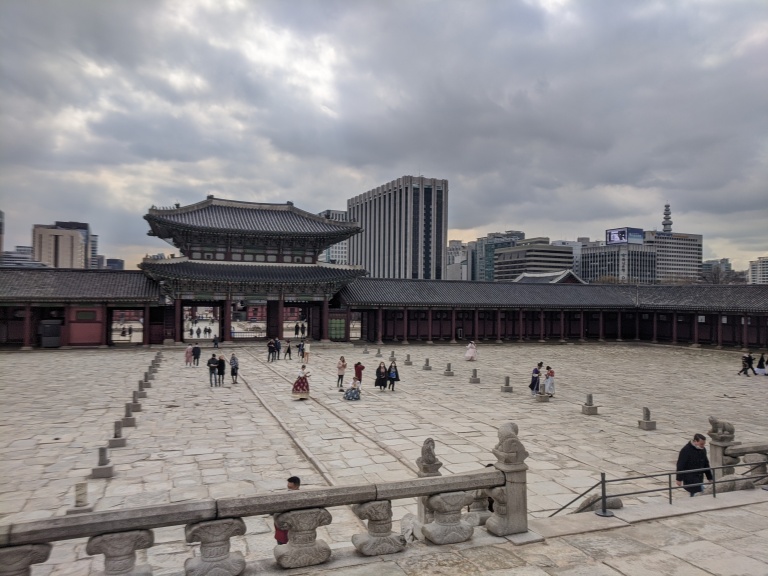 Beyond the front gate – probably the most photogenic part of the palace – the place is virtually a ghost town.

Adjacent to the palace is the National Palace Museum – which is closed due to the outbreak:

Likewise, next to the US embassy is the National Museum of Korean Contemporary History (a great free museum), which is also closed: 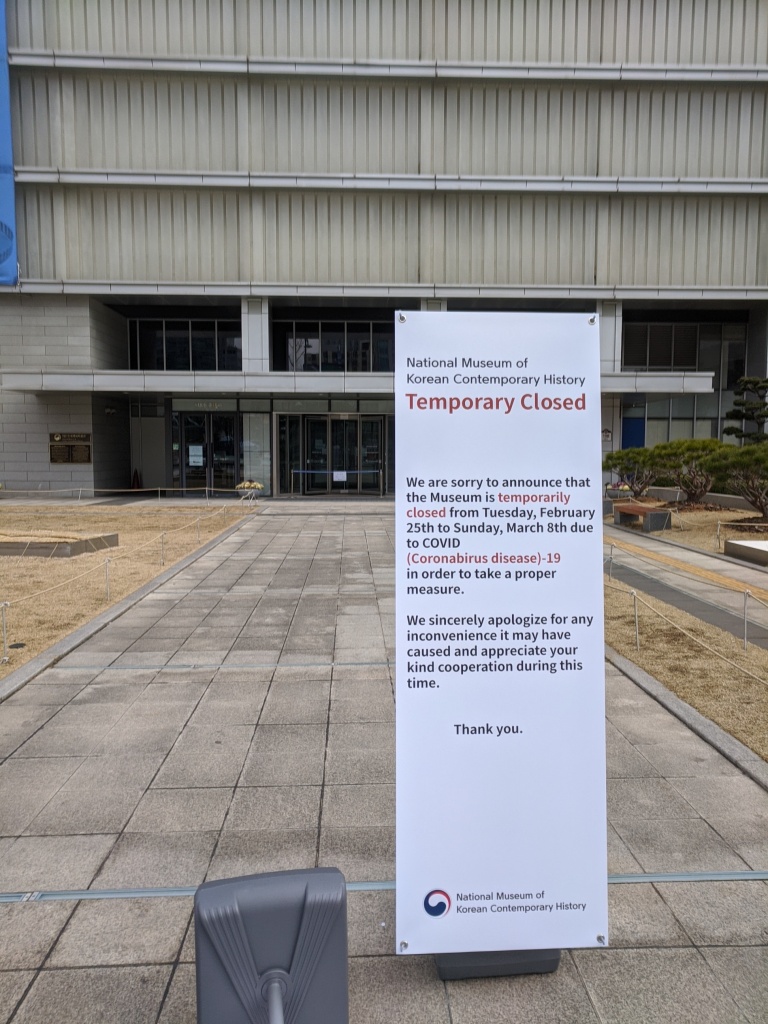 To get another feel for the situation I visited the bar district around Hongdae – Hongik University – on Friday night, after midnight.  In the part of the city I usually frequent (Mapo-gu), this neighbourhood probably has the wildest nightlife scene.  I’ve walked through at 4 am and the sidewalks have still been full, with girls in miniskirts randomly dancing, drunk guys holding each other up or vomiting into alleyways, loud music still going strong, and even line-ups to get into some clubs at that time of night.  On this night I pass through about 2 am, usually peak time, and although there are people out, it’s definitely far fewer than usual.

Those sidewalks (as well as the streets) would normally be full of revelers that time of night on a Friday.  The clubs that would typically have 50-60 people in line at this hour have 10, maybe a dozen tops.  I’ve been through here on Sunday nights that were busier than this.

So overall, the city is far from panicking or shutting down, but most people are obviously avoiding the crowds, even if the virus hasn’t made its way here yet.  Personally I haven’t undertaken much further prep aside from registering with the embassy in Seoul – in all the time I’ve traveled it’s the first time I’ve ever registered with an embassy, even when I was living abroad.  They’re sending out email updates every couple of days, mostly the same information available on travel.gc.ca.