Well shit, I get up at 4am and feel really well rested. I crashed out hard for a solid 5 hours and I guess that’s that. Birds chirping outside and it’s already getting bright out. Ok, time to sneak through this old townhouse to the bathroom without waking anyone up. Impossible. Every single stair on the way up has a horror movie creek to it.

Hasn’t been any rain lately

not sure what’s up with these EPs

Looks to be a nice day in the making

Around 530 Adam’s mom gets up. We find her outside enjoying the morning with a tea and a smoke. We get introduced and off to chatting. There are chickens in the neighbors yard, “Stand on the bench and you can see em”. I walk up to the wall, get on my tippy toes and peak over at some chickens in a cage, “Oh you’re a tall one aren’t ya?”

Peter makes us some tea and we relax in the backyard. Really nice morning with swallows overhead here to and vapor trails crisscrossing the clouds. Adam’s mom moved in a week ago, “I’ve just been cleaning. Got some new furniture. There’s just so much shit here”, haha now we get to hear the other side of things. “I haven’t told my mom I’m here. She’d never leave me alone. She’s batty as a fruit cake.” Funny thing to hear a mom say about her mom.

We get into a heavy discussion about the status of Peter’s dad and also about when Adam’s mom’s dad passed away. Death is something that affects everyone, eventually someone you know dies. Unfair or natural, it can be a hard eventuality at the time. It can take a while to accept and a while to get over, but there’s a change of perspective that happens too. You learn to appreciate the life you have a little more and value the friends and family you still have. “You two are spending your time well though, travelling the world.” Eventually you die too and that’s just how it is. She sums things up with the old adage, “Life’s a bitch and then you die.” Not sure I fully agree with this. Life has it’s hardships for sure, but choose happiness without imposing on the happiness of others and it should work out.

I get talking about Nova Scotia and growing up there and we’re led down a wormhole of childhood memories, Peter and I going back and forth on them. Some funny stuff. It’s fun to think about those times. Feels like a whole different life. I’m privileged to have grown up where I did, surrounded by the Atlantic Ocean and forests.

Relaxing morning outside w some tea

“We’re gonna check off 3 good items in 24 hours. Curry, English breakfast and fish n chips. Sunday roast is the last one on the list”

We might have to get a skip to clean up this place. What’s a skip? A skip? a truck comes and drops off a metal bin. You fill it up with whatever you want to get rid of and they come back to pick it up later.

Adam gets up and heads off to work. Peter and I take turns with the shower and now it’s time for some breakfast. We step into the Hyundai and search for a good ol’ English Breakfast.

First place we find has a sign on it saying it’s only closed today. A spot down the street called Jack in the box gets hit by 7 construction workers just before we get there. We end up at a place called Lisa’s cafe and bistro.

They also have a special here called the Steak Canadian. No idea what that is. Peter equates it as something similar to a philly cheesesteak. Funny to go to another country and see food with your country’s name on it that you’ve never heard of before.

Morning. Morning! Nice friendly vibe in here. Lots of locals coming and going. Everyone seems to know everyone else but us. Cheery and polite, the servers are singing to themselves while they work. “Just waiting on your eggs, Love, won’t be a minute.” The English accent adds a couple of octaves I think. They have much more pronounced inflections and a higher pitch conversational flow. It’s more musical than North American English.

Some funny headlines in the papers. Lots of puns and sarcasm throughout. 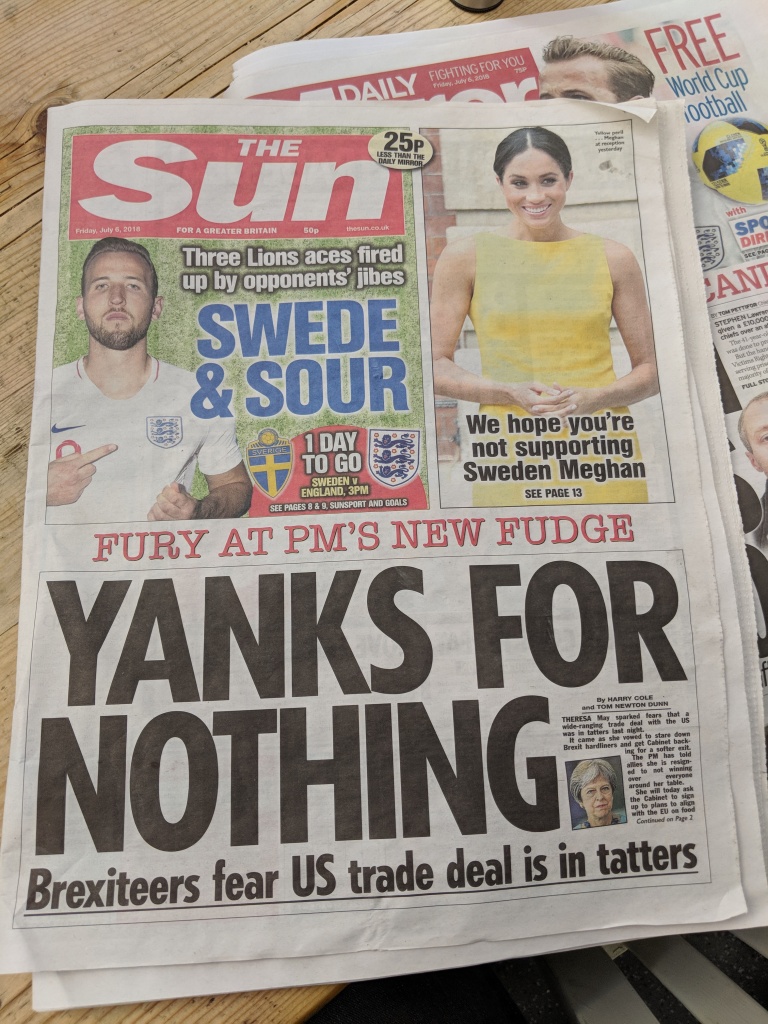 And then this glorious English Breakfast shows up. They really know how to do it.

They apologize for the serviettes haha.

Bread comes out and we make some mini breakfast sandwiches. This breakfast is the best. 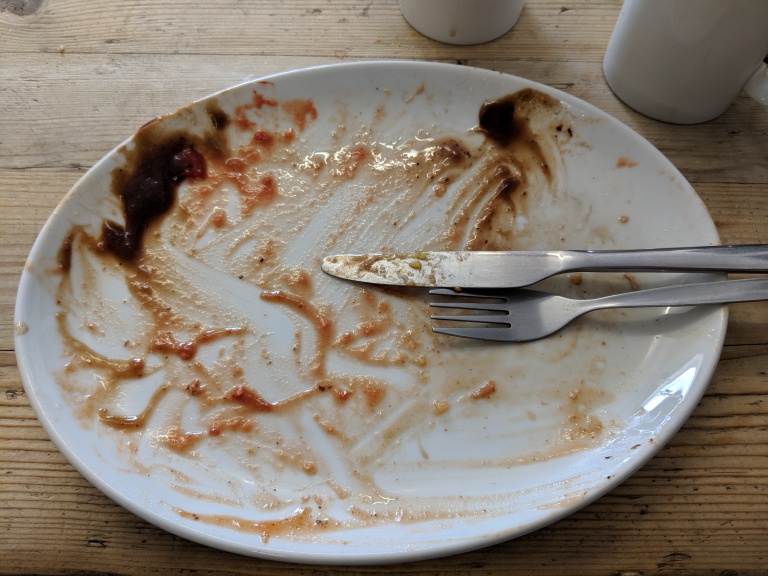 A CO2 shortage is affecting lots of local businesses. Beer noooooooo! And crumpets. Fucked up the crumpets! Kind of nice to have breakfast and read the paper. Haven’t done that for a while.

Look at that, Pickup Skips is outside the cafe.

After breakfast Peter decides to go visit his dad in the hospital. He’s in the ICU there getting looked after and doing some physio to build strength back up. We pass by Sandal Castle near where Mackay and I camped before the Mongol Rally. “Maybe I’ll just talk to some local teenagers at the grocery store, grab a bottle of fireball and head to the castle like last time.”

Instead I walk to a nearby pub called the New Inn. It doesn’t open until noon so i hang outside for a bit. I grab a cask pint of Doom Bar from the bartender. I can’t remember, you don’t tip in England do you. Naaah not on alcohol. This of course prompts him to ask what i’m doing here so I explain the situation with Peter’s dad and our upcoming trip. Sounds like a ball of a time. Yep, should be fun.

I sit at a table and get the laptop out to blog it up. The bartender is getting things ready for the day. He’s putting the days specials on a whiteboard, “How do you spell potato? Is there an ‘E’ on the end”, “Nope. Not unless there’s multiple potatoes”, “Ahh I think you’re right. I’m terrible at spelling.”

The bartenders daughter is in there helping out too. She’s carrying a massive pile of potato chips to set up a display behind the bar. They’re stacked over her head, it’s cute. She comes right over to talk to me. Brave little girl. Her name is Lexi. She’s home from school today but her brother and sister had to go, suckers. She’s 8. She has a 7 year old brother, an 11 year old brother and a sister who’s 14. She’ll be 15 in a few weeks actually. Lexi will be 9 in September. She has a step sister on her dad’s side that is 25 too. When England won the football match they went to Flamingo Land. There are some really high ones and some really fast ones (I gather she’s talking about some sort of amusement park?), “My favorite one was Hero. You lay on your belly and then whoooop! OOOOoooooh sheeeeesh it was crsaaaaaaaazy!”, “Sounds fun”, “Ohhh soooo fun, you should go!”

She is a taaaaalker. While I’m sitting there she keeps swinging by to check in. “I’m going outside for some fresh air”, “Ok”. She comes back in and wants to know how the writing is going, “What bit are you on now?”, Oh just talking about going for a curry last night”, “Oh you went for a curry?”, “Yup it was good”, “Yes, I do love a curry.”

I can overhear the bartender telling Lexi, “They’re talking about woman’s boobs, drinks and drugs so probably shouldn’t have you around in there. Out you get now”

Looks like it’s time for us to go too. Peter rolls in, an understandably worried look on his face. We’ve got an AirBnB booked for the next few days. Time to check in and get settled, probably swing by the market for some local beers.