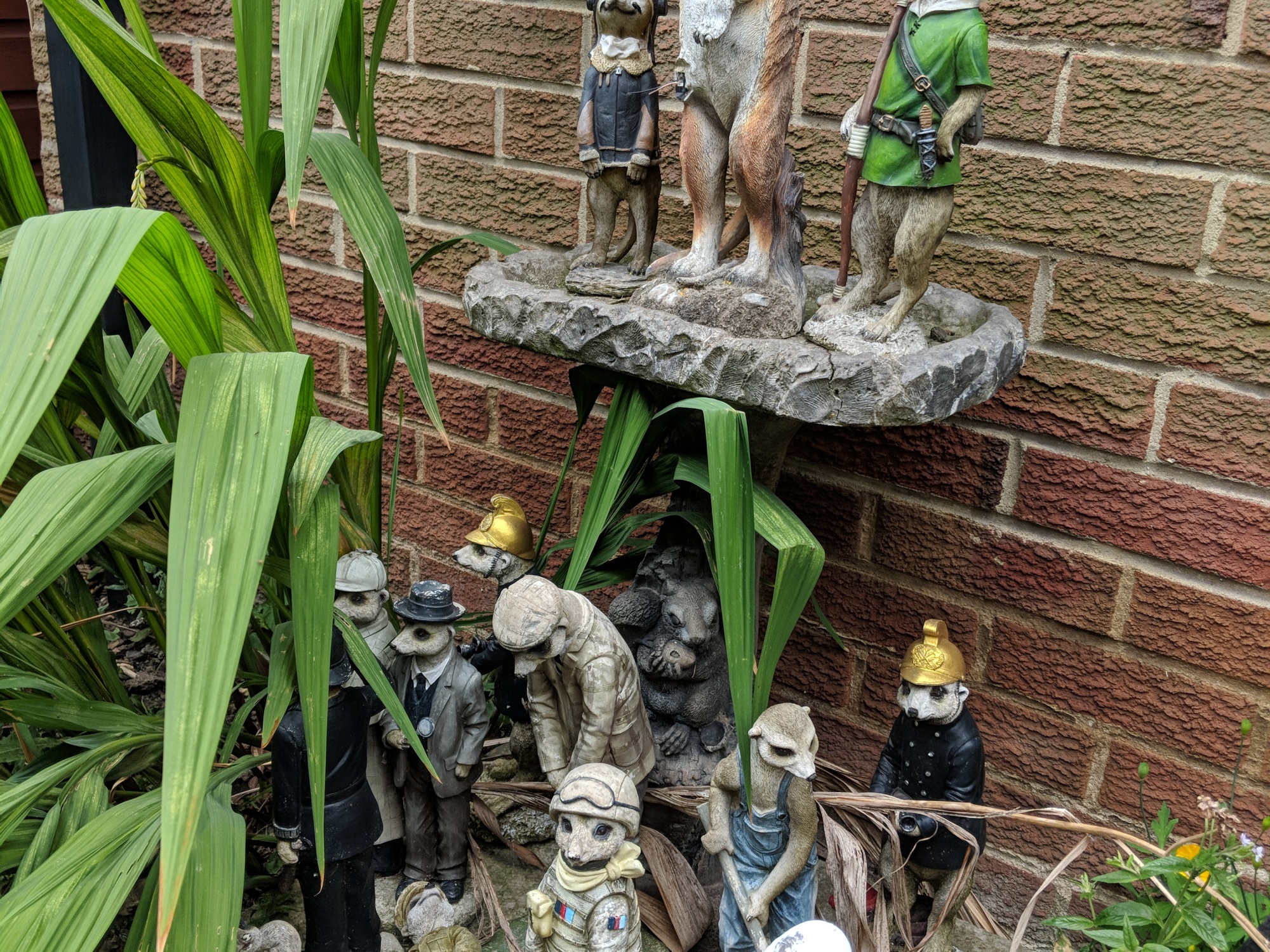 I wake up to Joni entering the room with a big grin, “Happy Trump Day”, “Oh gaaawd get me out of this country!” Peter makes a round of coffee and Joni is showing me pics of Finland. Looks beautiful. Lots of open greenery and a vid of him opening up an offboard motor on a boat to scare a couple of swans. “Beautiful creatures but I can’t stand swans”

McBurger hits me up on the secure agency line to see when we’re leaving. He’s in Montreal on a layover on his way to Nova Scotia. He’s starting to post about his Tuktoyuktuk trip, the scenery is stunning.

Peter’s upstairs neighbor goes on a bit of a Fine Young Cannibals marathon.

I decide we should actually book something for this Africa trip in the way of a safari vehicle. That way we aren’t running around wasting time dealing with it when we get there. I start looking into 4×4 truck rentals that are camping equipped. These rigs look badass. Toyota Hiluxs that have tents on the roof, stoves and fridges in the back. There are a bunch of companies doing this and they have one way drop off rentals so we could pick it up in Cape Town and drop it off.. where ever we end up. I start a google spreadsheet so we can keep track of the inquiries we’ve made and share it out with the other Detectives. I get a kick out of Drisdelle signing in as an anonymous dingo.

It’s about an hour before we have to leave and Peter starts packing. I would not recommend this to anyone going on a 6 week backpacking trip. Putting pressure on yourself like this before getting to the airport will generally lead to you forgetting something.

We say goodbye to the Finns and Russian and make our way up the drive to meet the Uber. Our driver asks where we’re going and says that he used to live in Chelsea, “This was before you were born. ’76.” He was in some boarding school or something there. He took Taekwondo. This dude hits the highway with all the windows down and launches my hair into a spiral vortex, whipping me in the face. I roll up my window but all the others remain down. Not much I can do but suffer through having a massive afro for the first part of this trip. The wind is raising the volume at a dastardly rate. Whelp, I’m just gonna have to own this shit. 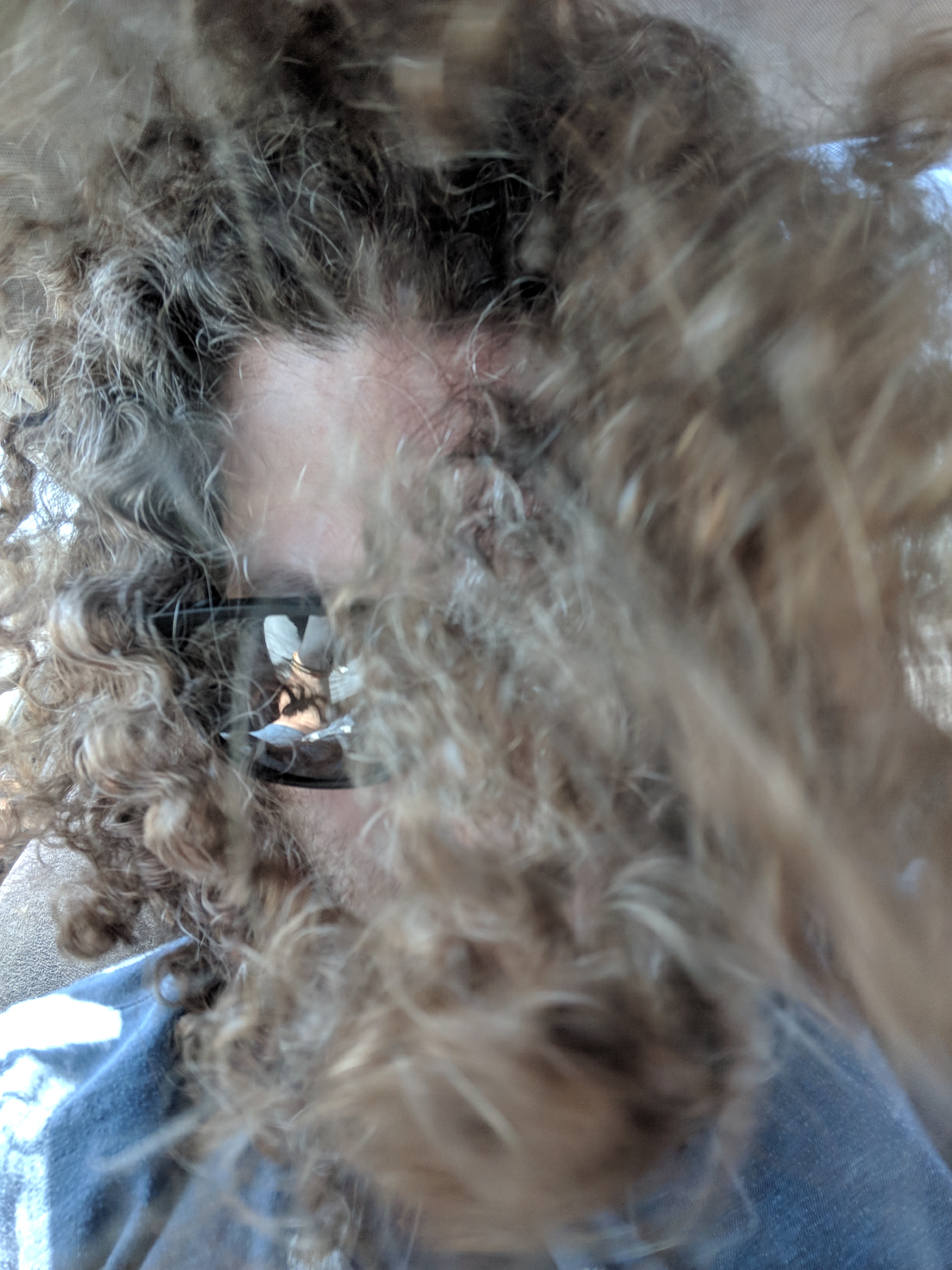 We get to LAX and breeze right through to Thomas Cook in Terminal 6. I have never seen the airport drive so empty before. No one flying on Independence Day. Works for me. I take some stuff out of my backpack and put it in a smaller bag. The carry ons have to be under 6 kilos?

We glide right through security and are near the gate with an hour and a half to kill. We get some seats at a bar and order some pints. We’re officially on vacation now 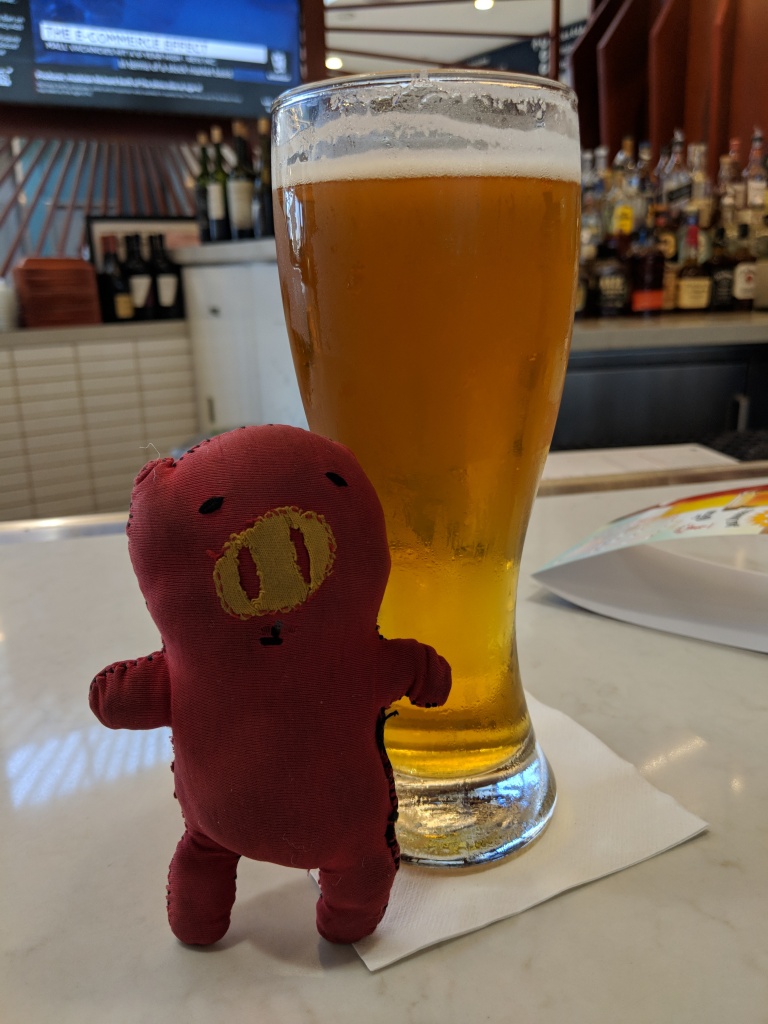 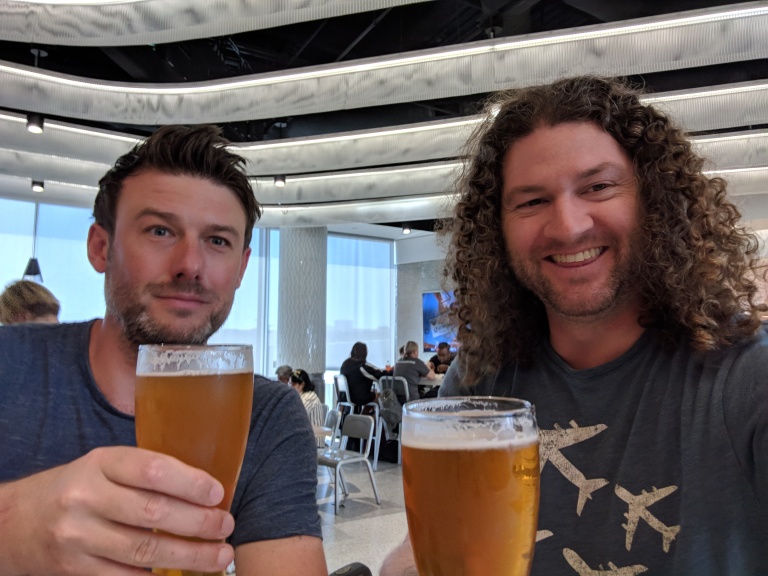 Looks like our flight is delayed 15 minutes. We can finish another beer then. Oh it looks like it’s delayed until 6. Maybe another. Oh shit, it’s 535 and it’s not delayed until 6? Chug our beers and rush to the gate. Whaa? It says 6. Ok well let’s just get another beer here. And another? Sure. Wait, there’s no one over there any more. Fuck, guess we’ll neck these pints too then!

We down our beers and cruise through the gate. We’re the last ones on the flight. Could have easily missed that. I guess it does always turn into a race. But holy shit do I need to take a leak now.

The plane starts to take off and something awesome happens. Another plane is landing at the same time on the runway next to us. We’re going at exactly the same speed like it’s a drag race. At the precise time we lift off, the other plane lands beside us. A weird synchronicity.

As soon as we’re at altitude I pop the seat belt and rush to the bathrooms. There’s a whole section downstairs for them. Never seen that before. There’s already a line? Was everyone chugging beers in the airport. America!

We order up a couple of scotch on the rocks. The little whiskey bottles are impossible to open. Neither of us can get them. We both go to our teeth at the same time, krak, ahhhhh 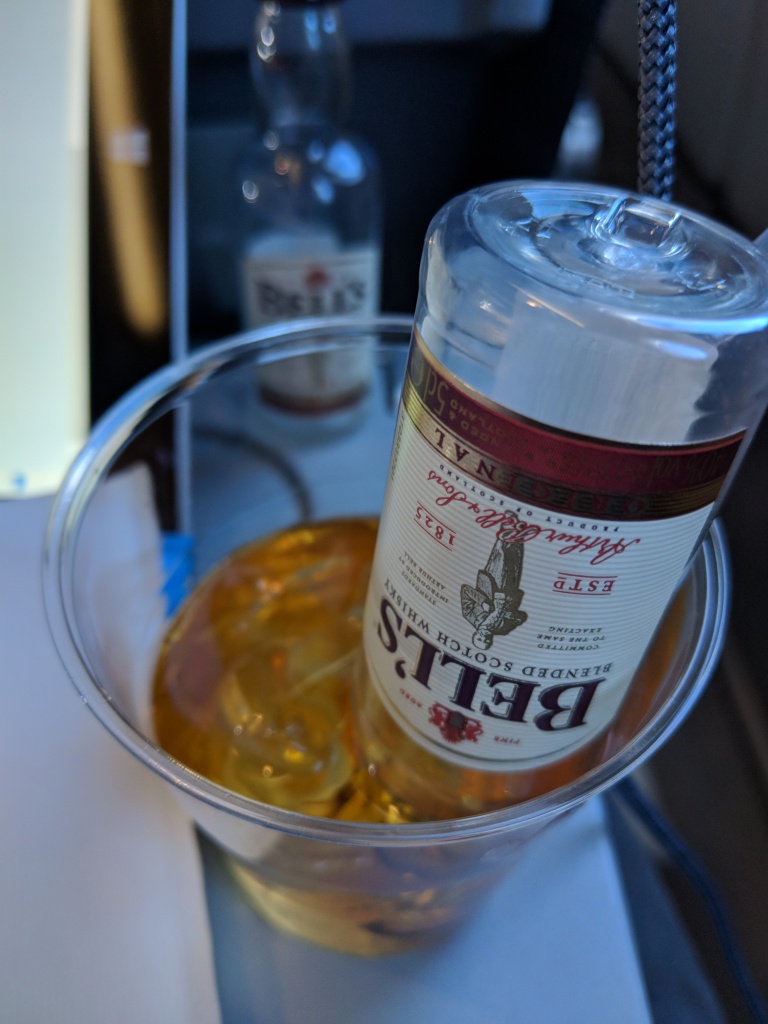 We’re sitting right over the wing and the Thomas Cook logo, a golden heart, is mishapen and distorted on the tip. It looks good against the sunset

Isle of dogs? Sweet! Haven’t seen it yet. I fall asleep midway through due to accumulated beverages and pick it up again after. Cute story. Another solid Wes Anderson flick.

Ok nap time. We’re above Newfoundland about to fly over the Atlantic just South of Reykjavik. I notice a message on my phone from Project Fi, “Welcome to Canada, we’ve got you covered!” Oh shit, I guess I forgot to put on airplane mode. I switched my mobile carrier to Project Fi before the trip because AT&T’s international plans are bullshit. Project Fi picks up local carriers and allows you to use mobile data on any of them the same as if you were at home. So it’s basically like having an unlocked phone and local sim card, except it’s just your phone behaving as normal, anywhere. So there’s that major bonus but my bill will also be less than half of what it was on AT&T? Yeaaaaah why isn’t everyone on this?

After some miserable in-and-out sleep we’re finally over Manchester. “Looks brown down there”, Peter explains that it hasn’t rained for a long time, “Exact opposite of the last time you were here.” All the buildings are brick below us. Looks straight out of the industrial revolution. 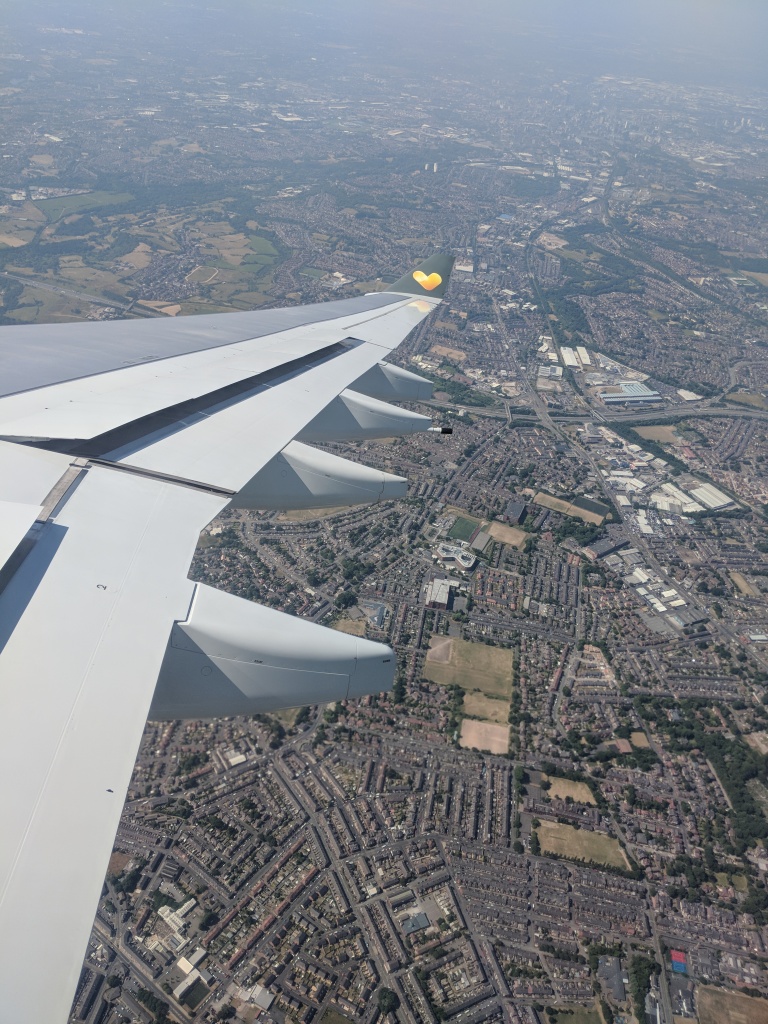 Land in Manchester and the foreign visa immigration line is horrendous. Peter zips through security no problem and is already collecting bags before I’ve even moved. This kills 45 minutes and then we’re off to Budget for a rental. Hey laaaady, step into my Hyundai. Normanton, where Peter’s mom lives, is an hour away so we hit a highway stop for some coffee to un-red-eye for the drive. Grab a tasty steak bake meat pie from Greg’s too.

Peter informs me that there’s a farm in the middle of the highway coming up. Apparently they offered this guy a bunch of cash to relocate when they were building the highway and he wouldn’t go for it. The upped the offer and still no. Maybe he was waiting for a larger landfall? Well they just built the highway right around it on both sides. Now I’d say it’s worth about zero. There are sheep fenced in the middle. This is probably the loudest farm worldwide. 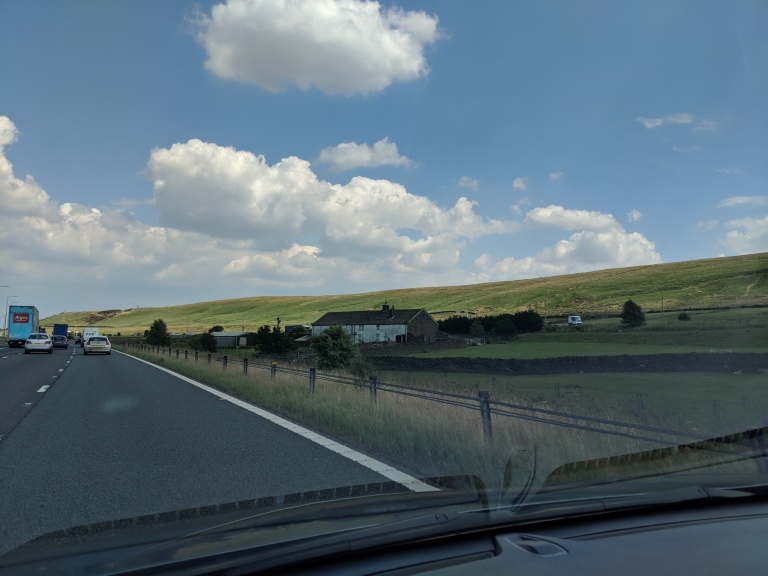 Oh look at that, we drive right passed Halifax 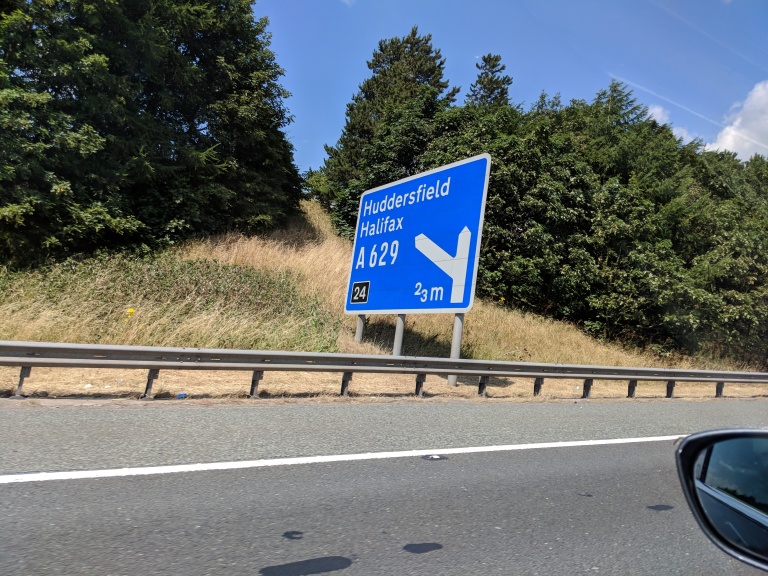 We pull into Peter’s mom’s place in Normanton early afternoon. Ahh yes this place looks familiar. This takes me back to 2012 when we were here prepping Admiral Nelson before his epic run on the Mongol Rally. Same ol spot in a quiet neighborhood, we come around back to the garden and Sue and Dave are outside relaxing in the shade.

“Oh hi, Jonathan!”, “Hey guys, haven’t seen you in about 6 years!” We grab some chairs and catch up on things. A flock of swallows darts back and forth overhead. It’s nice back here, peaceful. Smudge the cat is lounging in a patch of sun. Sue has just gotten back from Dubai and says she loved it. She fetches some pictures she’s printed out and gives us a mini tour.

One of the pics is of these two giant pink pelicans, “Whoa! What’s going on here? These guys are massive!” She describes that they were in Cypress at a restaurant having a bite and a car pulled up. The driver opened the passenger door and this big pelican stepped out. “Haaha what?”, “Strange inninit? I was like, what have I just seen? I just seen a pelican step out of a car! And the driver went around to the other side and let another pelican out!” Wow, you don’t see that everyday. “Pelican VIPs?”, “Well the restaurant was called The Pelican”

We relax for a while in the backyard just shooting the shit. It’s nice. Tired from the flight and jet lag but pushing through with a couple of beers.

I chat with the local meercats for a while 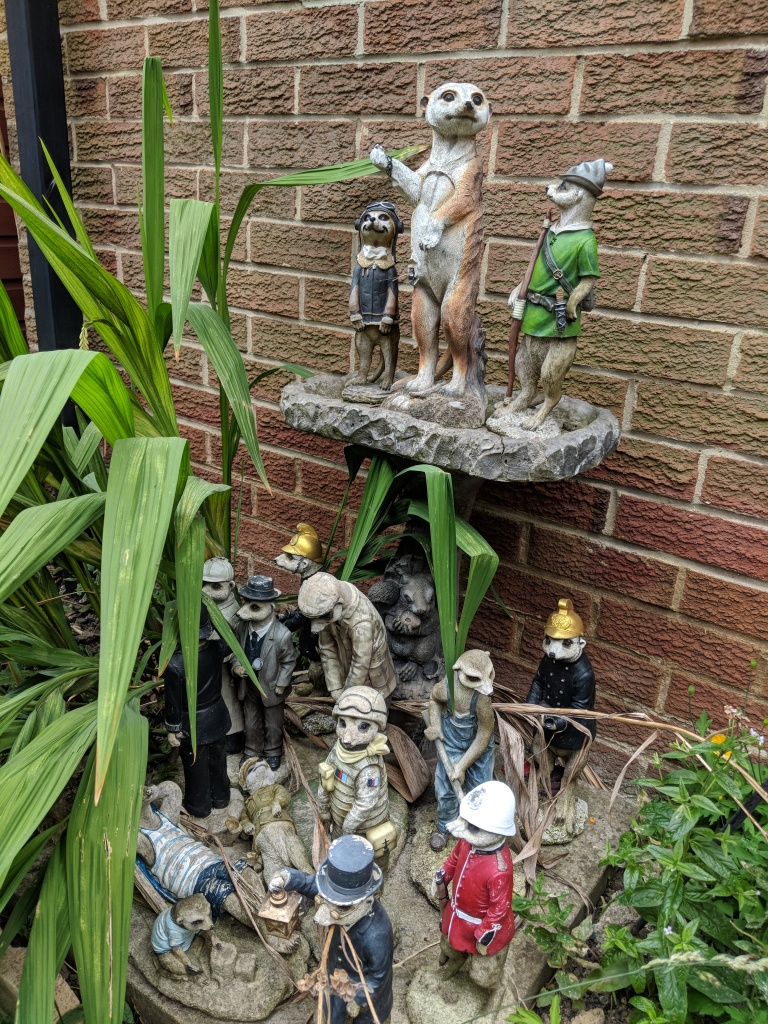 I check in with the other detectives on safari rentals. Most places have returned saying that it’s peak season and they’re all booked out. Some cheeky monkey recommended booking a year in advance for these types of things. Year in advance pffffffft, we didn’t even know we’d be going to Africa a year ago.