We get through the stripper gauntlet and it opens up to a row of restaurants. Lots of good looking options but we’re on a bukkake udon mission. Not leaving here without trying it. “Oh Bee! Nice to Meat You!”. Queenie spots a restaurant called Nice to Meat You with a couple of cute pigs hanging off a sign out front. It’s hilarious because Queenie used to have a monthly event called ‘Nice to Meat You’ where we’d take our friends to a Korean BBQ joint and buffet the fuck out of it. She takes a pic w Narcopiggy out front and this place seems all too perfect for us…

Whoa what the fuzz is this thing?! A Streedoo? What alternate future does this guy shop at, I want one!

Nice to Meet You!

We take a seat and the server comes over with some menus. She talks to us in Japanese and we have no idea. She’s embarrassed and doesn’t speak English. It’s ok, we’ll figure it out. The guy at the table next to us offers to help. We ask about some things on the menu and he starts to explain them. It’s basically a yakitori style, small plates place but more pork than chicken. We biff a bunch of stuff at him and he translates our order to the girl who bows and rushes off to put it in. Everyone working here looks about 16. Wth?

We opt not to all we can drink and just get a.. green russian? and a black freezing highball.

The translator guy asks where we’re from and we fire off the usual. He says that his friend from kindergarten is living in Vancouver (soooo many Japanese with ties to Vancouver on this trip!). I tell him my brother lives there, that it’s a remarkable place. He wants to visit, maybe next year.

Timid Server Girl brings out a few dishes. The fries look great! They come in a Wet Hot American Summer talking can of vegetables. Cool presentation. 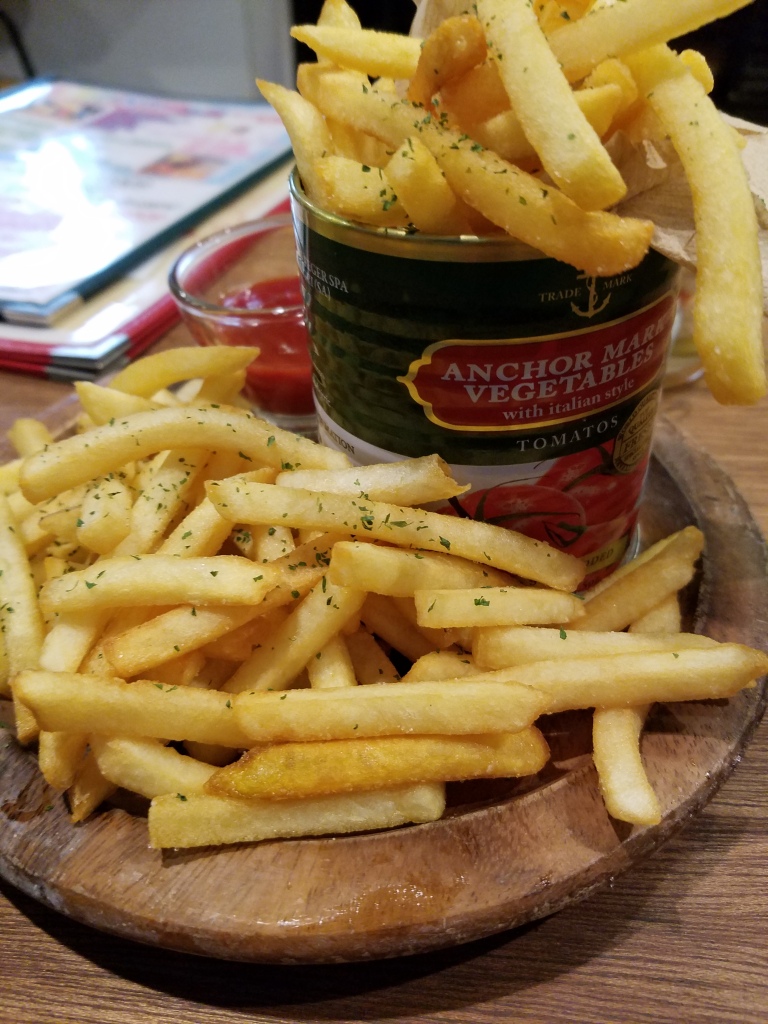 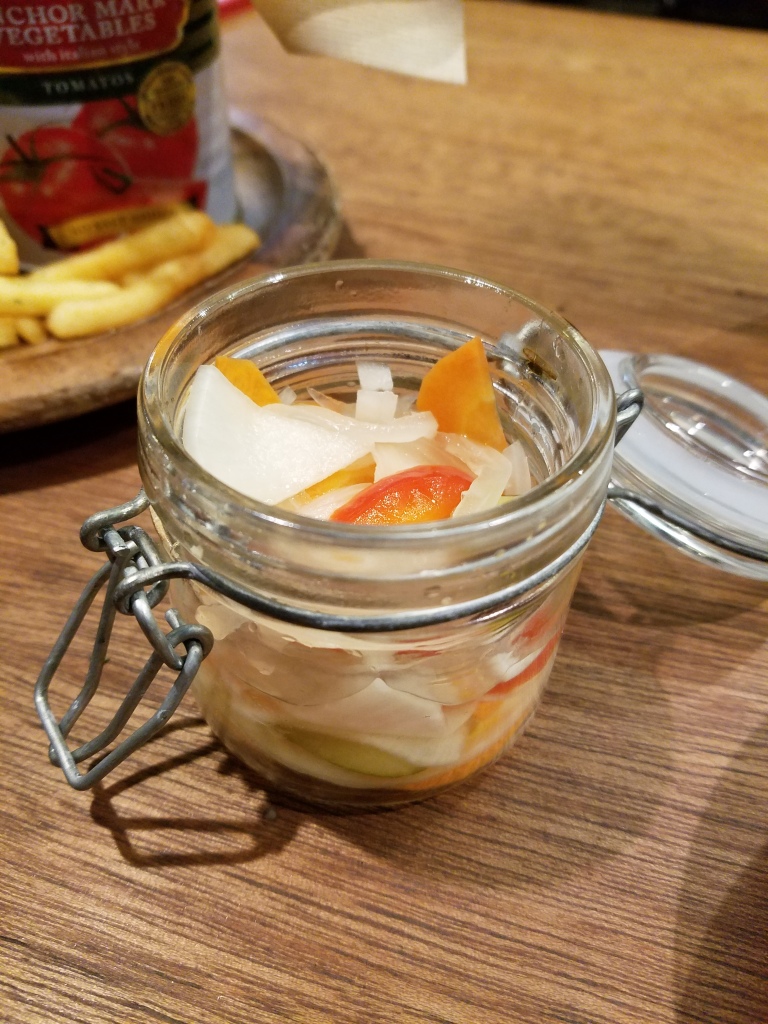 Fried somethings and two cuts of meat that look derishsssh

Oh this is like a meat sushi roll over rice w soya.

It’s fairly well documented that I don’t particularly like eating asshole (as a dish), but I’m still on the hunt for a good one. This isn’t it. This asshole is so chewy I can’t get through it. I try three morsels and can’t chew through any of them. Toughest asshole I’ve had yet. The spicy sauce is good and it doesn’t have that pure shit taste others have had, but I’m not gonna just sit here sucking on asshole. Nope can’t do it. My jaw hurts now from chewy asshole.

Our translator friend’s buddy is in the bathroom throwing up apparently. He didn’t look that drunk but Translator Guy says he is. They both are. All you can drink? Yeah. Haha ok. His friend comes out looking absolutely green in the face. Maybe too many green russians? what was in those anyways? Those two take off leaving just me and the Queebs. We pay up and leave too. Nice to Meet You! 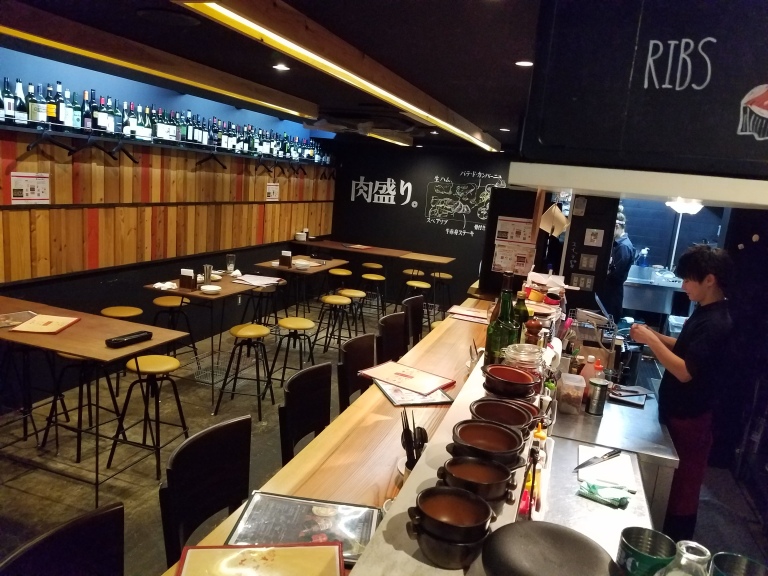 We walk in and it’s a really suave loungey place set up like a retro living room. It’s rad AF

We’re the only ones in here as well. There’s a band I’ve never heard of on the sound system that’s kind of a 90’s sounding, slightly funky with a female vocalist singing half English and half Japanese.  We have a seat and the bartender comes over. He’s rocking Nick’s Todd look. He’s all smiles and speaks English pretty well. He sits with us for a bit. I ask him about the band, it’s one of his faves. Love Psychedelico, I shazam it. LOVE PSYCHEDELICO, Calling You. Yes, it’s all caps. Not too bad. He drops some menus

We get some cocktails and hang. I really like this place, it’s super comfy. The next time the bartender comes over I ask him how he pronounces the bar name and he says, “Swolabar”, “It’s a cool name for a bar, after the Cream song?”, “Yes, I love Cream”, “Me too. But ‘She Was Like A Bearded Rainbow’ is a funny name for a bar”, “Wha?”, “The song title. It stands for ‘She Was Like A Bearded Rainbow'”, “What?!”, “Yeah man haha” I write it out for him on his order pad and he stares at it for a solid minute completely dumbfounded lol. His mind is completely blown, “I had no idea” and he cracks up laughing with us for a minute, “Glad you came in!”

Since we’re the only ones in here we decide to sit up at the bar and chat with this guy for a bit. I ask him some more about the bar and he tells me that it’s only been here for about half a year. He’s from Kurashiki. He used to be a police officer in Kobe but he quit last year and opened Swlabr. No turning back, he loves it. Inspiring stuff. I tell him we wer in Kobe for a bit and that I really like Kurashiki. It’s completely gorgeous and people seem super laid back. Kobe too.

I eye some big bottles on the shelf behind him and investigate. “Plum wine, we have lots”, “We’ll have lots haha”. And now we’re on a plum wine train to saucy victory. We tell Coptender about our trip and he pauses at the Onomichi portion, “Did you have Onomichi ramen? It’s the best in Japan!”, “What?! Nooooo!” Epic trip fail. We did not have ramen in Onomichi. But now we’re hungry, Nice to Meat You was all small portions and we need something to pair with the Plum Wine. He recommends the fish burger, <Phone saved allergy translation>, “Oh no, well then the Naoshima burger then”, “Nice! We’re going there tomorrow”. Queenie and I split it. He’s right, it’s excellent.

Coptender’s name is actually Kane. He’s a perfect host, fun and funny, he tells us his name is Kane. I make a run to the little boys room. It says Tanukees above the door hahaha. 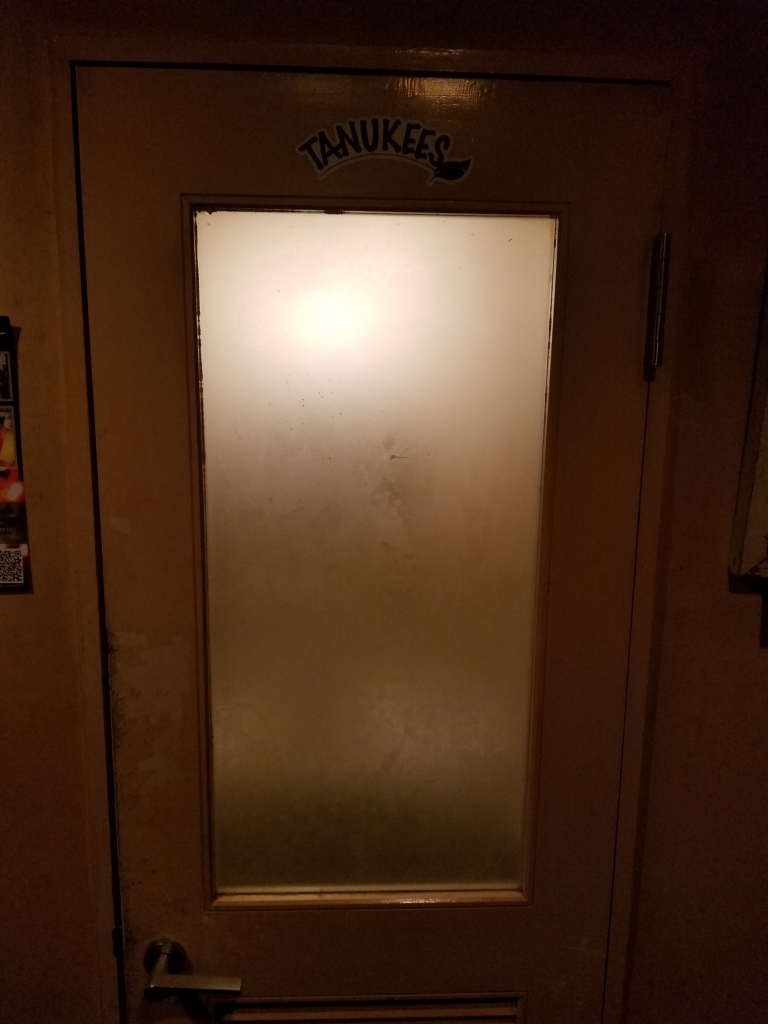 When I get back Kane is playing with a kendama. I tell him that I love tanuki and break his concentration, “Me too! You wanna try?” and he hands me the kendama. I can do this (give me focus tiny mighty wiseman!).

Queenie takes a vid. I nail it first try, yesssssssh! I’m getting the hang of it. “Use Tanuki trick!”, yaaaas again! “It’s the power of tanukees”

We finish our plum wine circuit and it’s almost closing time. We thank Kane for a wonderful time at Swlabr, “I’ll never forget haha”, us neither. Thanks Kane!

On the way back to our mega baller hotel room we stop at the Family Mart for some after hours vacation supplies. I ask the guy behind the counter about the snacks in the oven and he sighs heavily before explaining them to me like a drunk idiot tourist in slow simple english. He’s super gay so it’s actually kind of funny how he’s wording it but sheeeesh this family mart clerk is the first attitude we’ve gotten in Japan so far. Not a bad stretch though, 2 weeks and no assholes (people ones). 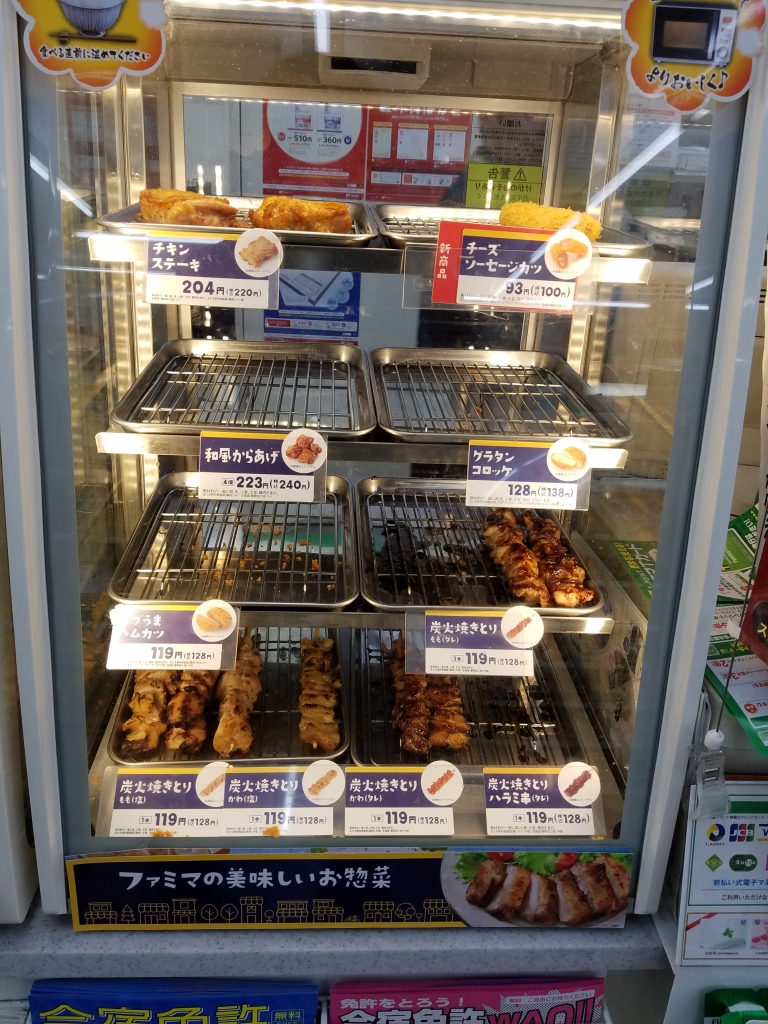 Fine Gay Mart we’ll just get some of these super spicy looking noodles. He’s not impressed. We get back to the Royal Arts and post up in the room. Boil some water in our mini kitchen and whoooooa these noodles are no joke! Spicy AF!! 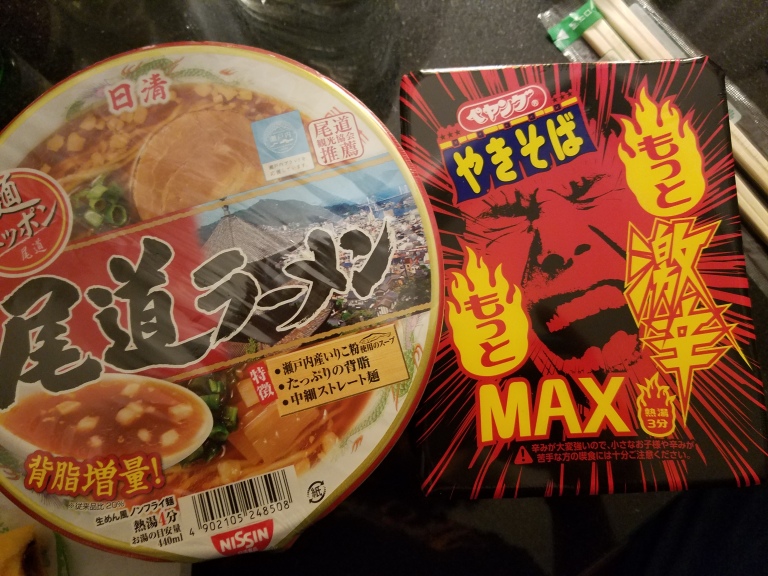