I feel like shit. Staying up too late and slamming back too many drinks is to blame. I’m a hell of a lot better off than Murphy though… He passed out on top of his bedding with his clothes on, but in one place where his shirt got raised up, he’s covered in a weird rash. His wrists are chewed all to ratshit by god knows what. Almost definitely something IN the bed, since neither Drisdelle nor myself have anything to show for it… (And I slept in my drawers.)

It’s late so there’s no time for breakfast, we wave down a cab and book it straight for the bus station, buying tickets for Santiago immediately upon arrival. We’re moving fast at this point but it’s because time is running low – both Drisdelle and Murphy have to fly out of Santiago and return the real life in the next few days. If not for that we might have stuck around Argentina a bit longer but seeing Santiago is a must-do for both of them before this thing’s a wrap.

Upon boarding a bus employee hands us border paperwork, so we’re ready to go when we hit Chile.

The bus to the border is incredible – as we climb into the Andes, the scenery is breathtaking. 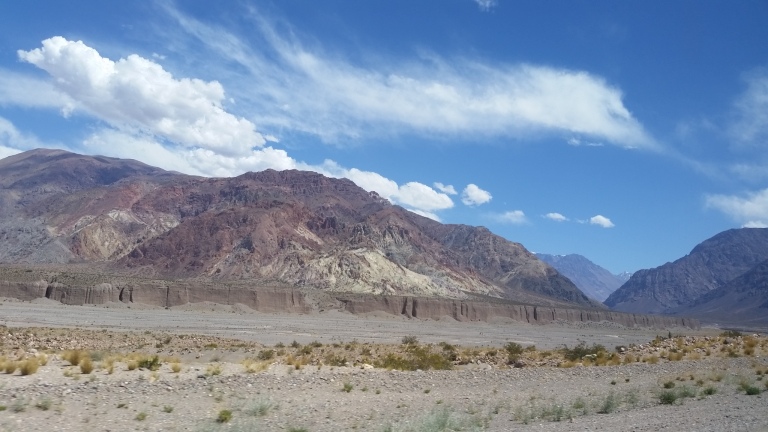 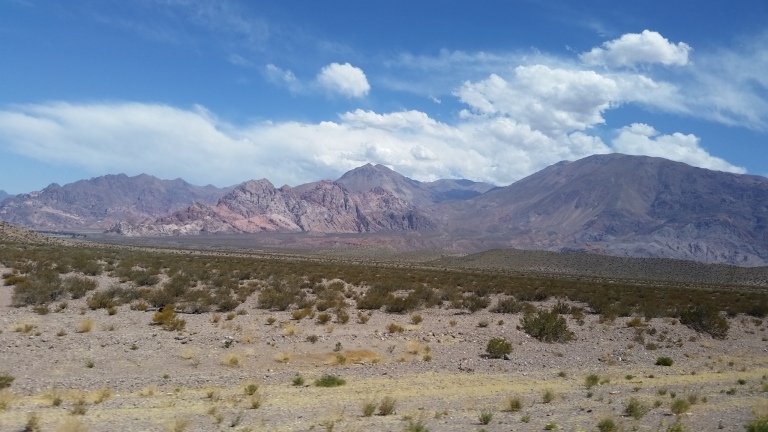 We keep climbing higher and higher until the bus slows down and pulls into a queue of buses. We’ve reached the frontera.

Our driver kills the engine and we’re let off the bus. This might be the most scenic border I’ve ever seen, and most people immediately start taking pictures of their companions or selfies. It’s mostly barren rock but with patches of snow spread around, as we’re at 10,500 feet. On the Argentinian side there are several small coffee and sandwich shops around but very little of much else and nothing on the Chilean side except for a ski lift… that we can’t see the beginning or the end of.

Murphy takes the opportunity to pun it up:

I let him know how his pun makes me feel:

“I’m going to punch you in the dick.”

While the bus waits in line we passengers form a separate line inside the border compound. It’s an integrated compound containing both Argentinian and Chilean officials. It goes off without a hitch, very professional, no nonsense. No reciprocity fees, either. We return to the warmth of bus… it hasn’t budged yet.

Roughly two hours later the bus is brought inside the compound and we all have to run our bags through an X-ray machine while handing off our customs declarations. Seems very serious but it seems like a big worry is agricultural (of course there are drug dogs everywhere as well). One woman eats shit from the authorities for trying to smuggle in a sizable length of salami… that’s a no-no. By the time this has all been resolved, the bus is loaded up and we’re back on, it’s been a two-and-a-half hour wait. Yowza.

The drop down off the pass is stunning as well. It’s hard to estimate how many switchbacks it takes to get down out of the pass. 75? 100? More? I really can’t say, but it feels like we’re switchbacking for an hour and the terrain has visibly altered by the time we’ve dropped onto the valley floor.

We reach Santiago shortly after the sun’s gone down but the city looks incredible. Immediately we can tell it’s far more modern than anything we’ve seen on this trip. There’s a lot of traffic but the roads seem to make sense and the traffic is flowing like you’d expect it to.

Outside the bus station we wait in a cab stand and then bounce to the Bellavista neighborhood, known for being where the party’s at. Hostel Bellavista’s computers are down and the staff member on call doesn’t feel like checking things the old fashioned way, aka walking upstairs to see if there are any empty beds, so he says he can’t help us. We walk three blocks over and rock up to Kombi Hostel. Murphy’s feeling like a bag of shit so he grabs a single while Drisdelle and I get comfortable in a “matrimonial”. Drisdelle says something to the effect of having had enough of me and he doesn’t need to see me for another two years, hahaha!

Murphy crashes out while Drisdelle and I hit the town to find a boozy dinner. On the main drag of Pio Nono we find a bar that’s divided into two halfs, karaoke in the front and a live band in the back. Divided might not be the right word actually, since we can hear both at the same time. I enjoy a huge plate of fries with meat piles on top of them and we slam back rums while the band plays a bit of original material but mostly cover songs from the 60s and 70s. They do a set of three straight Doors songs, and all sound to be sung phonetically – like the singer doesn’t know the words, he’s just making Jim Morrison sounds. Still pretty damn good though.

We retreat to backyard of the hostel, a couple of the guys who run the place are partying with some college-aged Mexican girls, and holy Jesus man they’re looking gooood. Several bottles of pisco are floating around and although I didn’t care for the pisco sour when I tried it, “piscola” (pisco + cola) is WAY better, despite it’s terrible-sounding name. We get into her pretty good, especially after midnight when Drisdelle wishes me happy birthday. “It’s your birthday?! You have to drink more!!” Okay, jeez, I guess I will if you twist my arm.