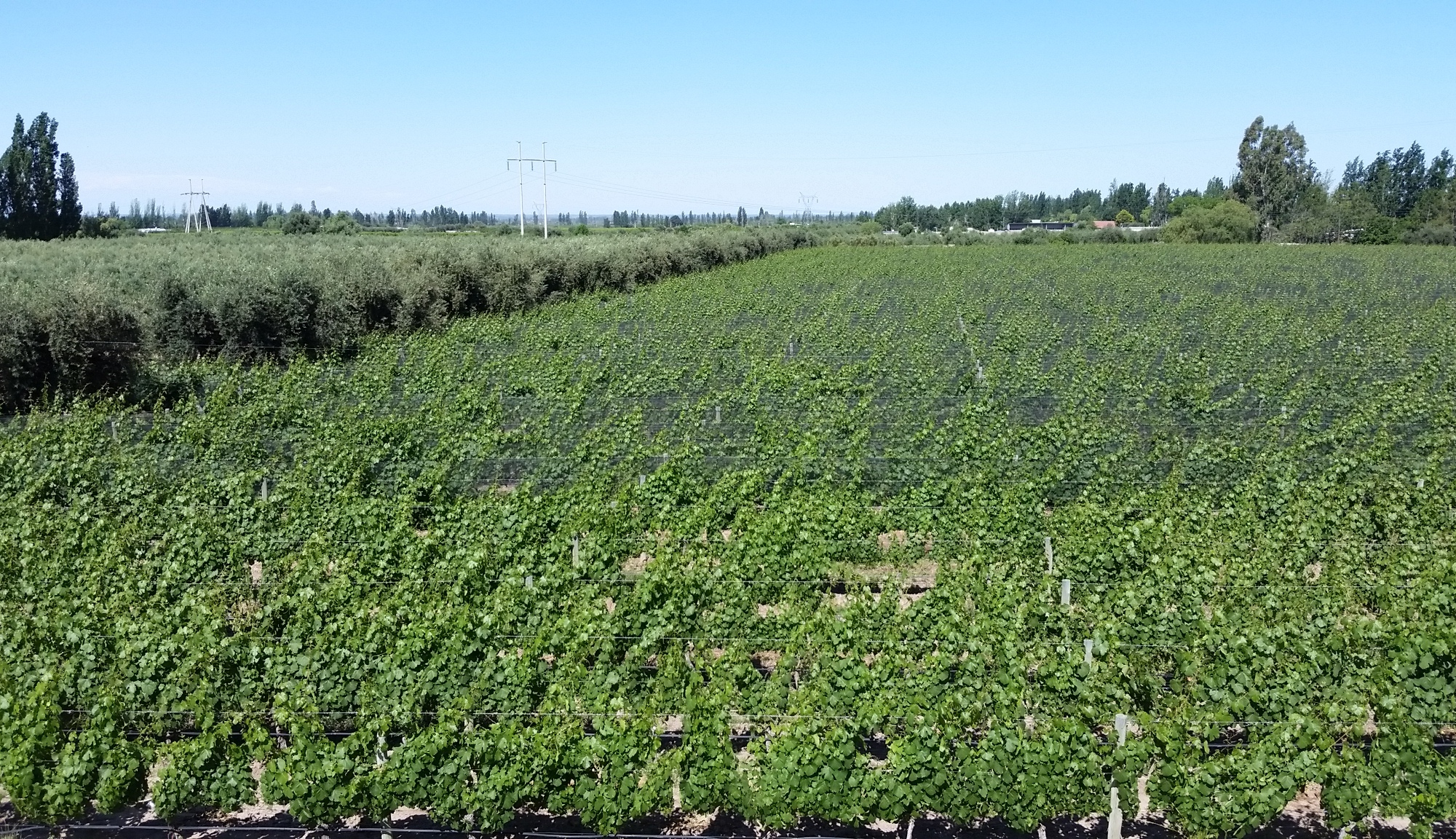 When the bus arrives in Mendoza we’ve already been awake for a couple of hours, and since the bus was pretty awesome and we slept well we’re ready to hit the ground running, no malingering. We grab a cab to the Alamo Hostel, one the boys had read good reviews for online.

On the way there we realize this city looks awesome. There are plazas all over the place, people walking everywhere, statues, trees lining almost every street, are we in Europe? Our cabbie tells us there’ll be a street party in this neighborhood tonight too…

When we reach the Alamo we find they’re out of rooms but no worries, they say there’s another just a couple blocks away called the Lifehouse that’s almost as good as they are, and they’re sure they have space. A quick cross-plaza walk and we’re there. We’re pretty sure the guy at the front desk is Jonah Hill practicing for a role – he looks exactly like him and talks like him (albeit with a Spanish accent, but not a strong one), but with long hair and metalhead attire. It’s uncanny. He tells us they had 120 Chileans staying and partying there yesterday and they’re still kind of picking up the pieces – as we walk around that doesn’t even seem possible, this place looks like it could hold maybe 60 or 70 people tops, but I believe him. Our room’s a simple four-bunker with an attached shitter, fourth bed unoccupied for the time being. There’s a smoking balcony a couple doors down from our room and it overlooks a grungy pool. We debate who will be jumping off the balcony and into the gloop this evening…

A couple streets over there’s a tree-lined strip of restaurants (+ patios) and shopping, definitely a great place to people-watch. It’s really surprising how different the people look here too, compared to where we were just a few days ago. Everyone looks very European. The strip itself feels like Toronto or Halifax. We grab some pizza and beer and soak up the sun.

With almost a whole afternoon to kill we pull out the napkin scrawled with wine tour instructions that we got in Salta yesterday. The intersection where we’re supposed to find the bus isn’t far so we hoof it over, charge up a bus pass and jump on. The bus is kind of hilarious – sitting close to us are a festively plump couple making out. The missus’ boobs are just barely hanging inside her shirt… no wait, there they go. We know we’re supposed to ride this bus until Maipu but there isn’t really a clear indication of where that is. Our buddy in Salta told us “we’d know it” because there’d be bike rentals and wineries everywhere, but after seeing a single winery (that looked closed) and no bike rental joints the bus driver tells us this is the end of the line and kicks us off at an intersection with fields in all directions.

At one corner is a sign indicating there’s a winery a little over a kilometre down the road. We stroll down and when we’re getting close we see dudes on mountain bikes pulling in. 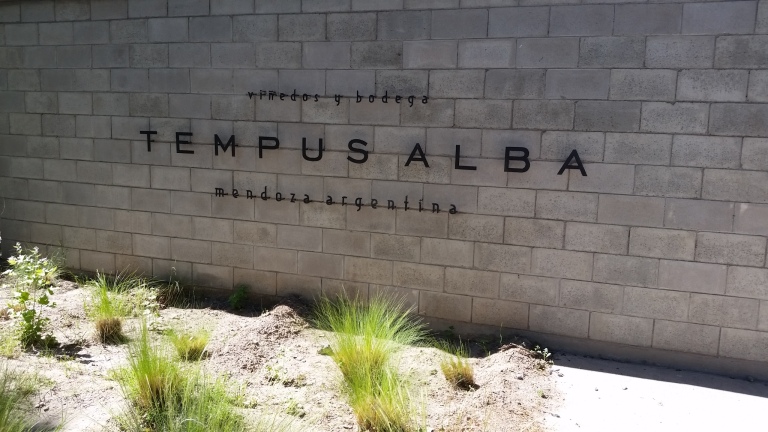 Interpretive signs guide our way – first up to a platform overlooking the vineyards,

… and then into the building

and up to a bar / balcony where several gorgeous dark-haired women were preparing sampler plates of the winery’s numerous products. We all grab a few different ones and head out to the balcony to keep soaking up the beautiful sunny day. The wine’s pretty good but it doesn’t blow my mind.

Also sitting on the balcony are the guys we saw roll in here, one’s Irish and the other’s a fellow canuck, from Toronto. They ask us whether we brought USDs into the country with us. No, why would we? They’re like “Oh shit, you seriously didn’t?” No, why would we? Apparently making an international withdrawal here gives a shit rate, basically 1:8 conversion on USDs. Moneychangers are offering more like 1:12, 1:13. Hmm, shit. At least we’re only here for a few days so it doesn’t really matter. (I looked up the official exchange rate later and it was showing as 1:8.6 at that time. So it’s not so much that the banks are ripping people off, it’s that the moneychangers are giving a kickass rate…)

We walk away from the winery and head back to the main road, equipped with a map Murphy scored from the bar. There’s a “beer garden” on the way back to town that we decide to check out. We walk for maybe twenty minutes in the sun and pass by a resto-bar… Alright, screw the walking, let’s get some drinks. There’s nobody else there but they don’t mind cracking open a bottle of wine, some local stuff called something like “four fat cows” (but in Spanish). Mostly chosen because it’s local and there’s a cartoon on the bottle, but it turns out it’s pretty good stuff.

After finishing the vino we decide to call a cab rather than hoof it, it’s getting late in the afternoon and we don’t want to miss the beer garden because it takes too long to walk. The staff call a private car for us, not a cab, he runs us over to the beer garden then says if we want to go somewhere else after that, he’s down. He lives nearby so it’s no biggie, he can be our personal cabbie, haha. We’re down too so he passes his number to the staff. 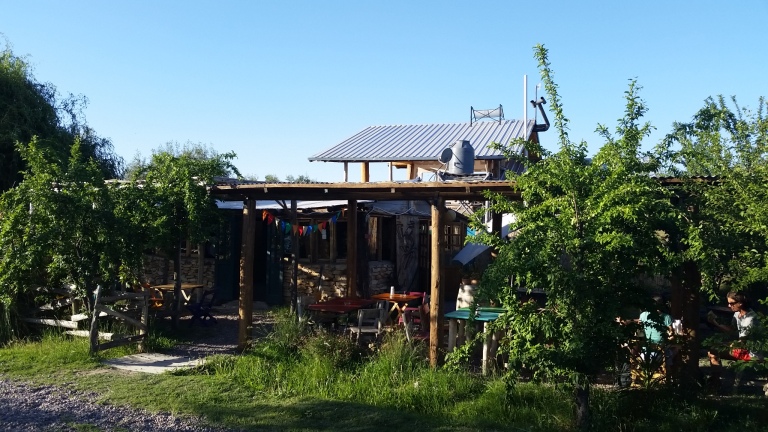 The beer garden itself isn’t really what we expected, it’s basically a small house with a fenced-in yard around it, picnic tables in the yard. They’ve got three types of microbrewed beers – pretty damn good – and really awesome chicken & pepper empanadas on the go. There are two waitresses, and they’re dressed the same and done up the same… except one is quite obviously a tranny.

Aside from ourselves the only patrons are four Dutch guys and gals in their early twenties. They’re doing a bike tour but they’re a little concerned about the return trip; apparently they’ve been drinking all day and are starting to question their ability to cycle safely. One of them adds “And we’re Dutch!!”

We call our driver and get him to run us back to town. We may not have gotten to many vineyards today but we’ve gotten enough sauce into us that we’re pretty geared up for going out tonight, so we grab a few more bottles and head back to the hostel to fuel up. Things get sloppy as we’re kicking it on the balcony and we’re looking at the pool again. Drisdelle accidentally knocks a bottle over the edge of the balcony, narrowly missing a couple of Chileans smoking below and spraying shards of glass around the courtyard.

Properly juiced up we try to find the purported street party but we strike out. Asking around no one seems to have any idea what we’re talking about. Party? Stop off at a couple local bars for rum & cokes and there isn’t much happening, but it’s Friday night! There MUST be a party somewhere! We wave down a cab and try to explain what we want by just blurting out words like “Licor! Chicas! Fiesta!” He says he knows where to go and we’re whipping through the now-busy streets. Jazzed up we ask him to turn the radio up but the radio’s busted so we perform a complete rendition of Bohemian Rhapsody a cappella.

He drops us at a straight-up gringo bar called the Black Sheep. Order up some wings and they’re pretty damn good, slam back more rum to go with them. Post-wings Drisdelle’s not looking too sharp… And after a couple more drinks his head’s on the table and despite punches from me and Murphy we can’t keep him awake, so we roll him out into a cab and dump him off back at the hostel.

The cabbie who takes us back to the Black Sheep neighborhood gives us his number and insists that if we want to go to an after-hours place where we can meet some girls we should give him a call. Not sure if he’s talking about bar, a strip club, a brothel, who knows… There seem to be implicit winks and nudges.

Around the corner from the Black Sheep are a stretch of resto-bars that are serving a few hundred shitfaced people on tables that cover the sidewalks. A lot of the people are seriously trashed and one guy who’s running solo seems to take exception to us. He asks us where whether we’re English, to which Murphy responds “yes”, and immediately his face turns dark. “We’re from Canada, we speak English.” He relaxes a bit but he still seems super-sketchy and he says if we were English… and then he does the throat-slit action and rambles something about his brother being in the Falklands. We try to drink and enjoy ourselves but this guy is stumbling around behind us, creeping us… pretty weird.

Without a clear place to take a piss I stumble around the block and look for an alley. Two guys are trying to help a drunk girl out of a huge hole in the sidewalk she’s apparently fallen into. There are holes like this all around Mendoza – usually around utility poles – and we’d been saying they’re drunktraps.

I get back and a group of younger dudes who speak English rock up to a table next to us and the drunk Falklands guy is being a bastard to them too, he’s just looking for a fight. A couple more drinks and things are shutting down, one of the dudes tells us, very explicitly:

“Do not walk anywhere from here, you will be robbed. Like 100% chance.”

Then him and his buddies all laugh and wish us good luck. We try to flag down several empty taxis and none will pull over for us. The street is rapidly clearing out. Jesus Christ. Eventually one decides we look like upstanding citizens and drives us back to the hostel. It’s really astonishing how a town that seemed so tranquil during the day has turned at night.

At the hostel we try to purchase some nightcaps to no avail. There’s a gas station a couple blocks over that we go into and grab a few bottles. Girl at the counter is vehement – No! You CANNOT buy this! We try to play the “Come on, we’re tourists” card but she just points to the security camera over our head. Well shit. We grab some Snickers instead.

On the walk back we come across a playground and as we’re pretty drunk and have jack shit otherwise to do, we jump on some swings and then the merry-go-round. Damn, we’re retarded. It’s something like 6 or 6:30 by now and people are waking up to go about their day. I really hope some of them witnessed this debacle.