After about an hour Micki’s black Saab finally comes bombing down the curvy road towards us. He pulls up and he’s already apologizing as soon as we open the doors, “Sorry. Guys, I’m so sorry. Rush hour the moment I left. Stuck in it for almost an hour.” “No worries, man. We figured as much.” “I’ll make it up to you with a drink.” “Well, now we’re talking.”

The song Prototypical by some girl named Stine Bramsen hits the radio on the drive back. Never heard this. Some catchy shit

We get back to Skopje and the sun is basically set. The Kale Fortress looks dope lit up on the hill. Micki pulls back to the parking lot just behind Mickitos and we walk with him over to the cafe. “Sit, have a drink?”, “Yeah, for sure. Couple of beer to start, methinks.” “Sure.” He lands some beers and hands us some drink menus.

We drain the beers in a jif and decide it’s time to pep it up. It’s been a full day, need to try and wake up a bit for ze evening times. We nab Micki on the way by, “Irish coffee and an espresso martini, please.” “Fabulous.” Admittedly this idea was cast upon us from the chalkboard behind.

“Alright, we need to make a plan here. We going South to Ohrid, or up into Kosovo?”, “Ohrid kinda makes the most sense.” “Might not even get to Kosovo if we do that though, right? Into Albania from there, then Montenegro maybe?” “Then we’d have to backtrack through both of those to get to Kosovo and then head South again?” “Yeah. I don’t know. We’ll be doing a big loop no matter what maybe.” “Hmmmm maybe we…”, tilt the glass, “Yep, more brain suds required.”

There’s an upbeat playlist pumping over the Mickitos speakers. The cocktail caffeine is kicking it up a click. A song comes on and just lightly sits in the background while MacKay and I try to tailor up a travel plan. But as soon as it’s over we’ve both got it lodged in the noggin like a good Kenny Loggins. “I’m gonna build.. Castles.. fromtherubbleofyourlove!” “Yeah, what the hell was that?” “Dunno, never heard it before. Florence and the Machine eat your heart out though.” We look it up. It’s called Castles by some band named Freya Riding.

A few tunes later and its fucking Tones and I again. Seriously, what the hell is going on with this Dance Monkey song?! I think we’re averaging two rando listens a day now.

Micki comes out with a couple of free Raiki shots. “I love this song.” “Oh dude. It’s insane. We hear it every. damn. day.” MacKay points to a menu item, “How are these Mickitos?” “Named after me. Must be good, right? Haha. I’ll get you some.” 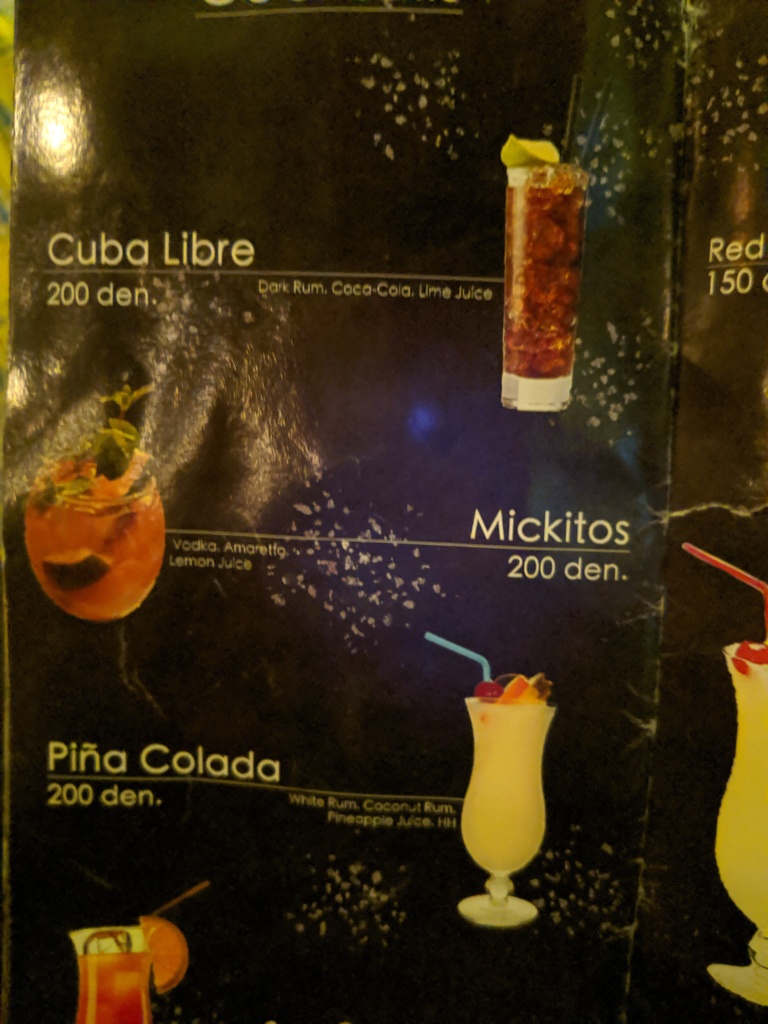 Vodka, Amaretto and lemon juice. Ya, that could be good. He comes back with two of them. “You decide where you’ll go yet?”, “Not really. You mentioned driving those Dutch guys to Prizren…” “Yes. We can go any time.” “It’s no problem?” “No no problem at all. Maybe meet at 9 for a coffee and then we go?” MacKay and I exchange a quick glance and a fuckit shrug. “Yep perfect. It’s a plan. Cheers Raiki!” Micki smiles as we clink our shots and down them.

On to the namesake drink, “Damn. These Mickitos are goooood!” “Ya fuck. Dangerous. Alright, so Kosovo tomorrow it is then.” “Yep. Then on to Shkodër maybe?” “And up to Montenegro from there. I like it.” “Looks like it’s time for the puffy jacket posse.” Six dudes in puffy jackets go by.

We kick it with our killer cocktails content with our new plan. Almost primed for a night time walkabout. Micki comes back to check in, “How’s everything going, man?” “Great, we’re just chilling.” “Awesome, you need more drinks or anything?” Look at our cups still half full, “Yeah two more of these mickitos I think, they’re delicious.” “You want two more now or later?” rattle the ice, “Now is good.” “Alright, I got you.”

We tank these last drinks and are itching to move the feet. Grab Micki on the next pass, “Think we’ll pay up”, “Ok, that’s 7 million dollars.” “Sounds about right.” Flip out the card. “We’re gonna go walk around.” “We’ll high five Philip II and Alexander and see you at 9.” “Ok sounds good. Thank you guys.” “No, thank you.” “Enjoy guys.”

Alright, time for a lit up statue walk. We leave our table at Mickitos and mosey through the bazaar. The place looks great at night with the cozy lights and obligatory cross on the hill.

Can’t get enough of this guy. 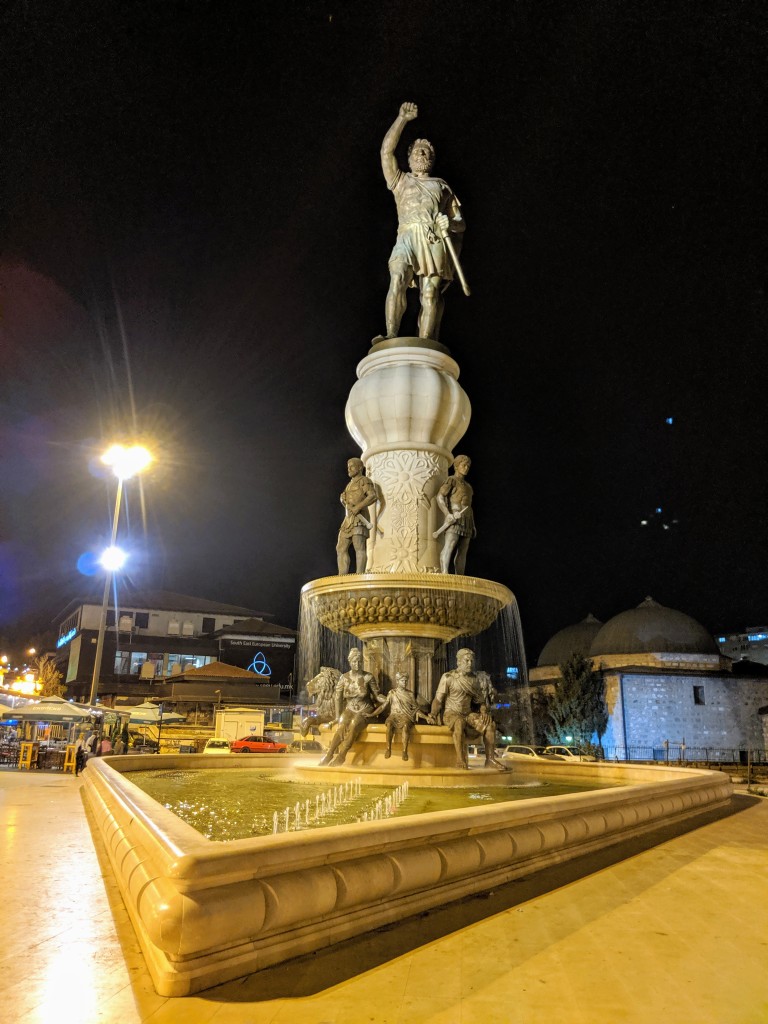 All of the over-the-top section of town is pleasantly more over-the-top at night with ambient lighting and hues of purples, blues and greens. 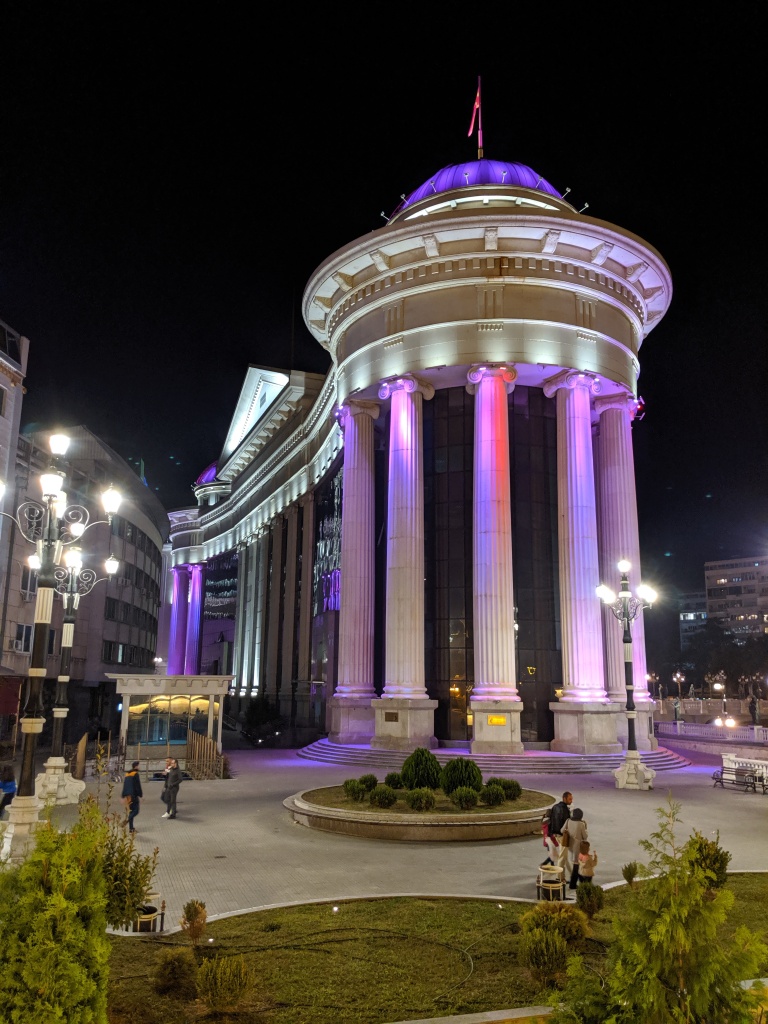 We cross the 6th century stone bridge back to the main square. This Alexander the great statue though. Insane. 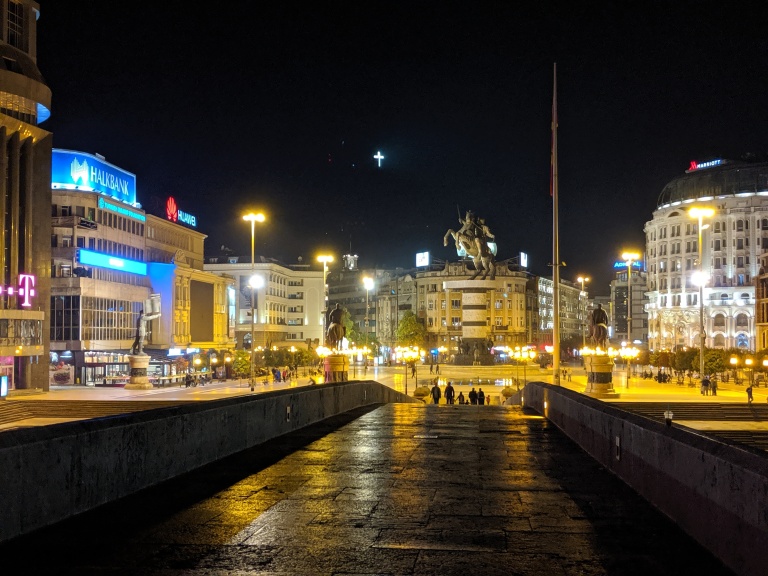 Coca-Cola and Huawei muscling over some real estate. Sign of the times

This place is silly. Like Caesar’s Palace in Vegas but with actual history.

It’s Monday night and we’re feel aaaaalright. We trot over to the Vardar river and check in on the Galleons 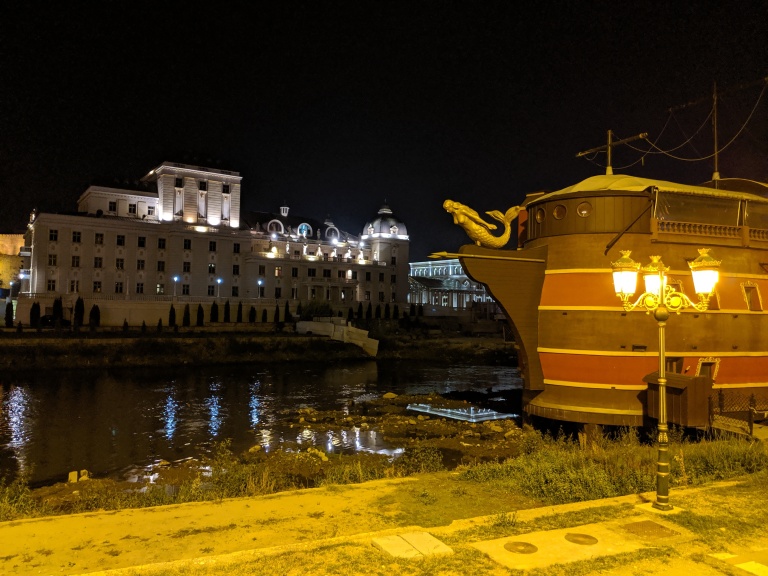 We decide to make our way across to the government buildings we’d spotted from the Kale Fortress earlier. They’re immaculately lit with a war memorial in the foreground. This is a monument to the liberators of Skopje, Built in 1955 by Ivan Mirkovic. 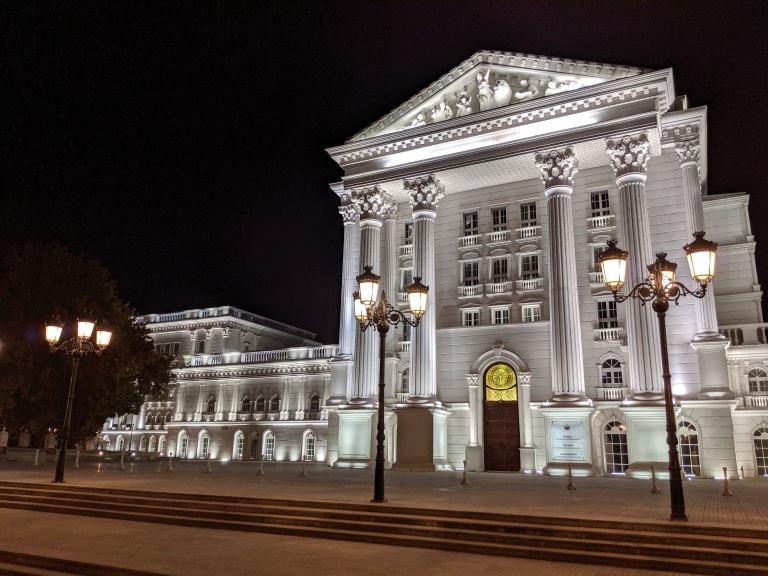 We round a majestic lion with an embossed war memorial.

We head down to the river and now have the reverse angle that we had earlier in the day from the fortress walls. Looking back towards the fortress from the government buildings by the Vardar.

We parkour our way under the bridge and find some graffiti.

Aaaaaaaand the best statue in Skopje?

And we finish the loop back to the bridge by the square by some elegant bastard taking an epic selfie. World’s First Selfie Stick. 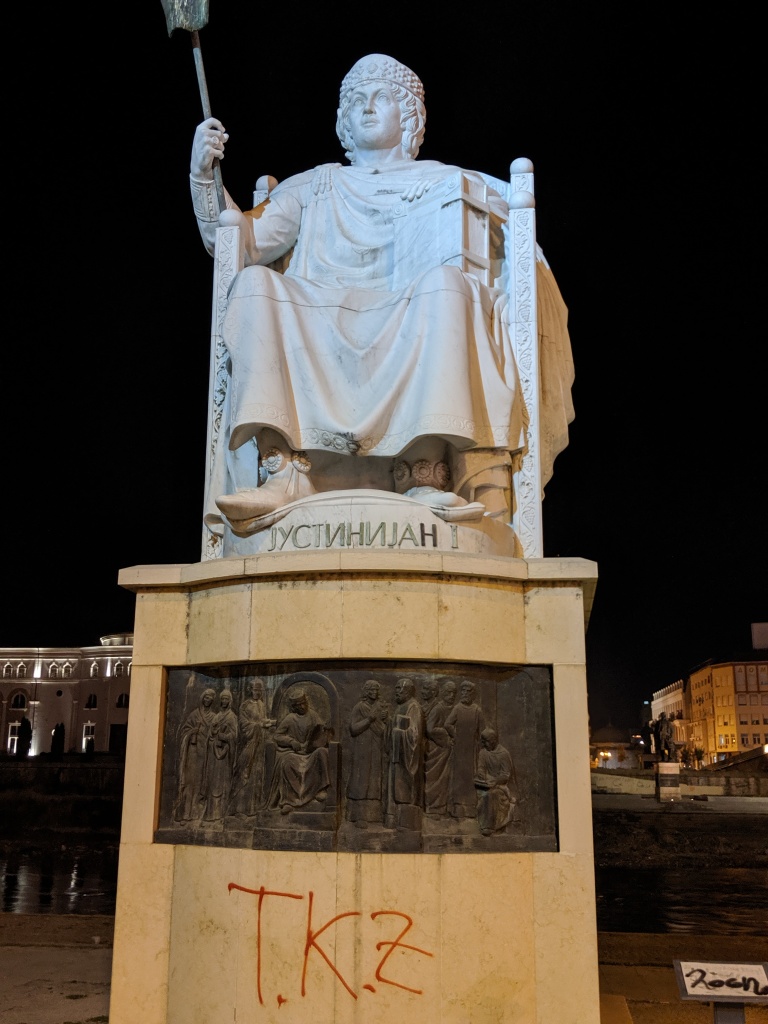 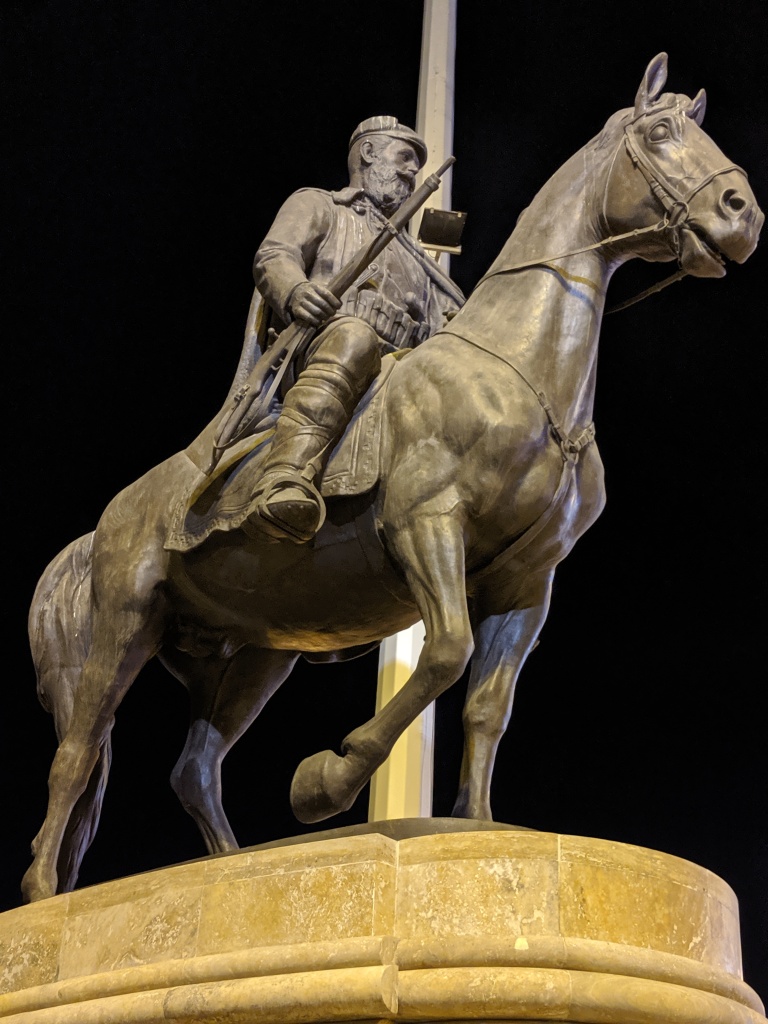 I throw down a quick jam sesh with some locals.

Not bad not bad, but it’s time to re-up. Didn’t find a single watering hole on the walkabout, maybe have more luck around Alex Da G. Quick spin around and we end up back to the place we had breakfast at in the square earlier. Kolektiv. 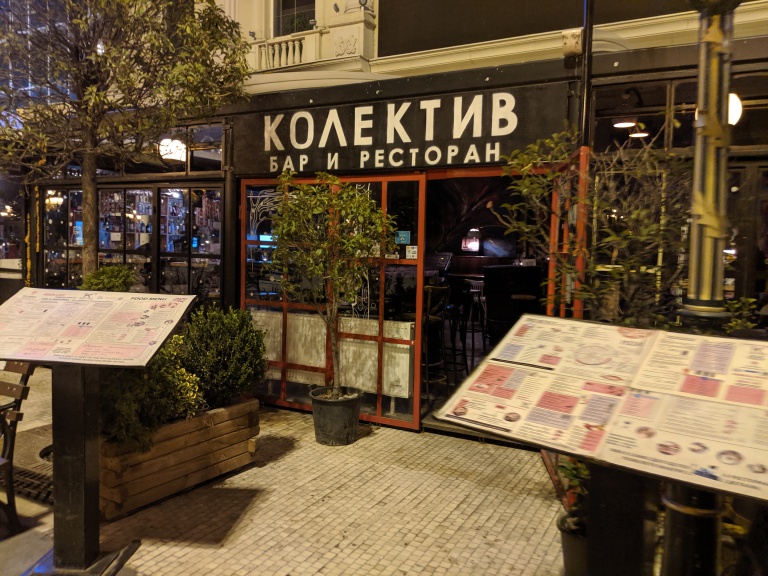 We file in and find some seats by an abstract painting of commie ghosts and some business guy doing business stuff on his business phone. 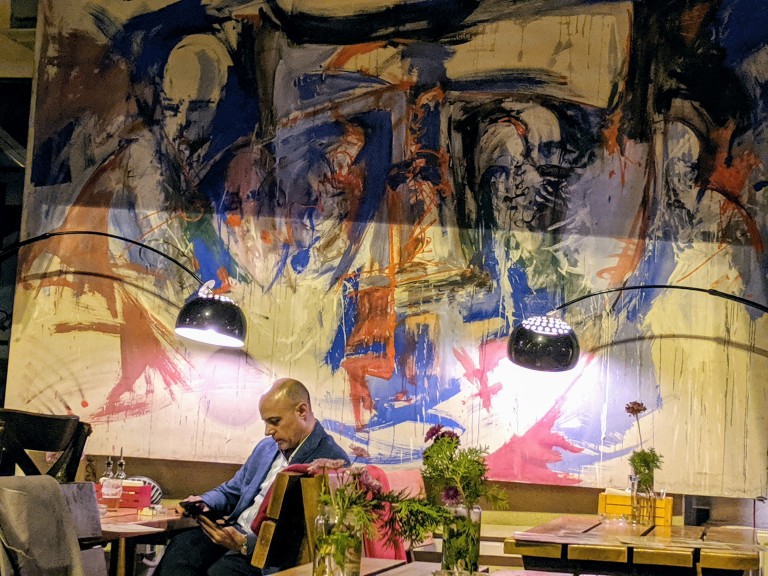 A thick-rimmed glasses beer type guy comes over and is full of punky night energy, “Guys! What can I do?” “We want two dark and stormies.” “No no we tried it today and it’s not so good.” Ok cool, that makes no sense but whatever. “You may want to change your mind. Maybe beer margarita?” “No beer.” “IPA I think.” “Haha nope. maybe a Negroni?” “Oh yes, yes! We can do anything!” We’re not overly convinced. “How about a simple gin and tonic.” “Of course! What kind of gin do you like?” “Hendricks?” “Oh yes, Hendricks. The Best. Ok for you!” “You still serving food?” “Yes, you must be quick.” Quick breeze through the menu. I point to… “Let’s get a spicy Macedonia pizza?” “In.” “Ok yes! Traditional! Coming up for you!”

They’re playing the Pixies in here. Debaser. Digging it. Hyped up Thick-Rims comes back and lands the most off color negronis we’ve ever seen (reminder: we’d settled on a simple gin and tonic). “Perfect!” He nods excitedly and walks off. “Sooooo.. lacking some red in there eh?” “Ya, I’m guessing they don’t have Campari.” “Whelp..” clink clink, donk on the table and up to the lips. “Ahhh terrible! What is that?” “I’m guessing… Amaretto?” “Oof really really bad.” “Agreed. Wow pizza’s out already.”

And he’s back with what may be a pizza. 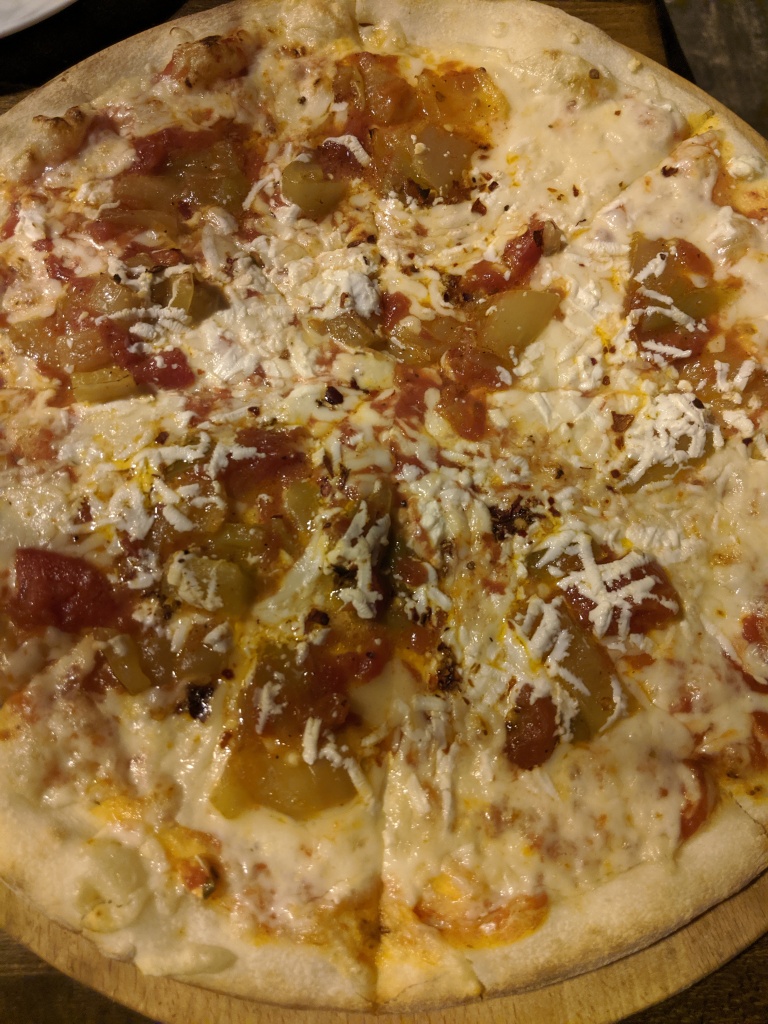 Skeptical at first after that negroni mishap but the pizza is actually good. MacKay is scarfing, “Coulda used another minute in the oven.” “For sure. A little different but.. kind of delicious.” “Ya not bad. Not spicy at all really.” “Spicy for Macedonia maybe?” narf narf.

Things smooth out sound wise with a little Harlem River by Kevin Morby. We sink into it quietly stuffing our faces and sour facing the ‘negronis’.

The place is closing up as we’re finishing the za. We thank Hypey Thick-Rims and pay up.

Not much left to do it seems and we’ve got an early date with Micki for Kosovo. “Just head back?” “Looks like it.”

Back through the bazaar and there’s still a stall open. What? This place is just selling records on the street at midnight? Steve Windwood album sitting right there staring at me. Kinda hard to travel with a record though. But maybe that’s just the challenge I neeeeeeed? No. No probably not.

We amble back to Mickitos and take up our usual seats by the chalkboard. Couple more Mickitos night caps for good measure. The music has changed up a smidge and we’re into some decent jazzy psychedlia with Cymande. Great mood music.

Papa was a Rolling Stone by The Temptations comes on after this and we decide on one more Mickitos before we’re ready to call it.

Back up to the pad and MacKay spends a million minutes on the door lock. 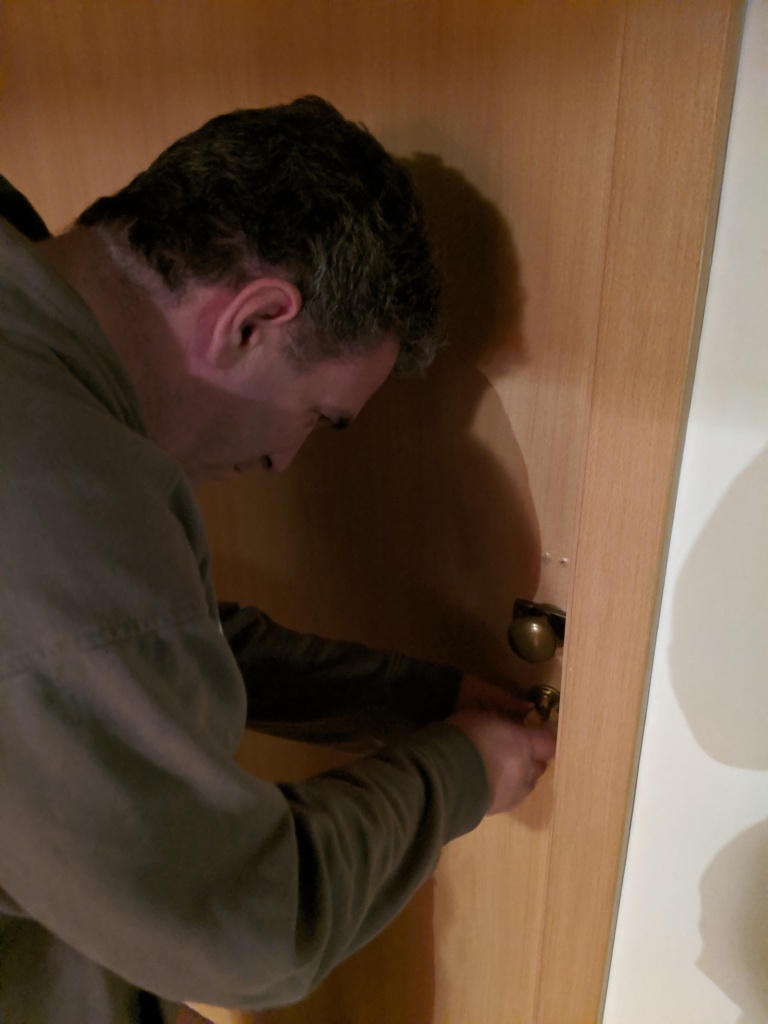 I go brush my teeth and come back to MacKay playing Regulators on his 1980s headphones. Uh-oh, still fairly amped. I guess that means it’s K-Pop boxer time with a little Burt Reynolds action. Yep that should do it, pop in the snore plugs and out. Kosovo tomorrow. Why not