We leave the statue plastered area surrounding the Vardar River and backtrack across the stone bridge passed Philip II again. Maybe another pic of that rockstar.

On the other side is the Old Bazaar section of Skopje. It’s super colorful and classically old looking Ottoman-esque. The stone walkway spreads out like a cobweb between narrow streets splintered off from the main drag. Lined with shops of all kinds and fabulous shady patios to wet your whistle at. The authenticity of this section is a nice juxtaposition to the over-the-topedness of nearby statue land.

Yep, this looks like a good spot to nuke an afternoon, out of the heat with a few beers. Definitely coming back here after the fortress.

We come out of the Bazaar and cross the street to the hill leading up to the fortress. Yep. This is cool.

The Skopje Fortress, aka Kale Fortress, dates back to the 6th century AD. It is thought to have been constructed during the reign of the Roman emperor Justinian I. People have lived in this area since the Neolithic and Bronze Ages dating back to around 4000 BC so there’s a good bet other fortifications were here before it was built.

We find the back entrance and are approached by a local with a man bag and brochure of some sort. Doesn’t seem to speak English well but does know the word ‘Guide’. A quick look through the entrance to the interior reveals that there’s really not much to investigate over there. Don’t think we’ll be needing the help of a non-English speaking guide today. We motion against it and say thanks anyways.

Through the gates and we’re at the fortress summit. Some hilly grassland stretches across strewn ruins of building foundations out to the walls which remain in good condition and you can walk along. Good view down on the city from up here.

There’s a glassed in section in the center of the fort that looks like it holds some artifacts inside but on approach the doors don’t open. Must be under construction.

Yep good view from these walls. Looking down towards some maxed out government buildings

And out across the bridge that we walked in on passed the Bryan Adams billboards.

Back towards central statue land and the Mother Teresa Plaza

The walls are impressive. Interior, not so much. But not bad for a 1500 year old fort.

They really don’t want you going down this rickety death trap to a pit of absolutely nothing.

Alright, that about does it. We make our way back along the walls to Captain Manbag who nods as we exit. Curious what insider info he could have possibly given us in there.

Walking along the base of the walls again we get a better sense of their scale.

And since I failed to get a good shot of the imposing front of Kale Fortress looking out towards the Vardar river and the Old Bazaar, I’ll toss this one from wikipedia, by Yemec, in here. 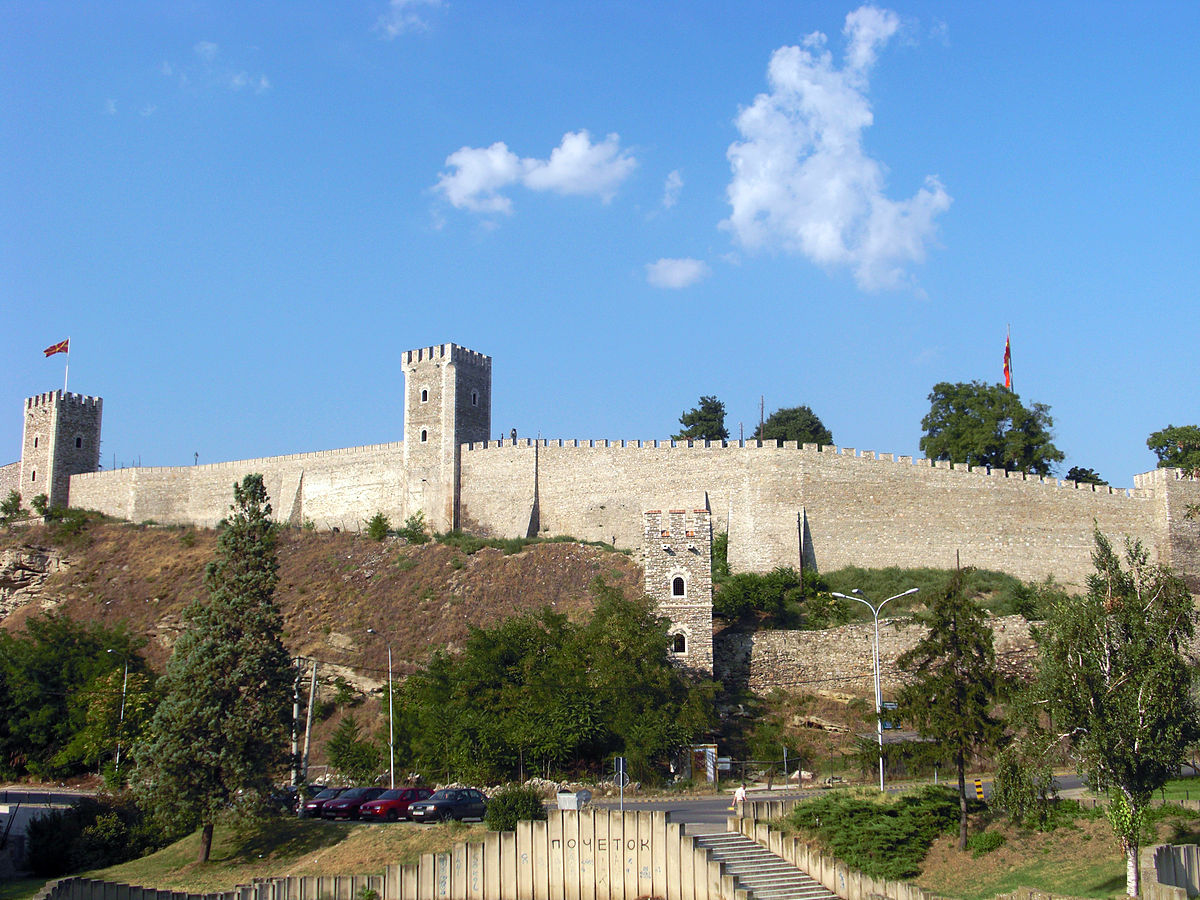 Back down the hill we pass by an impressive mosque. It is the Mustafa Pasha Mosque built in 1492 (…I feel like some other memorable event happened that year). Beautiful Ottoman era building kept largely unchanged from it’s original construction.

We’ve worked up a sweat walking around the elevated fortress grounds at midday. Time to head back to the bazaar for some brain suds and take a load off.

We find some shade at a wobbly table in an alley and point to some beers on the menu for the gracious old timer that comes to inquire. Ahh here we go.

We put back a few rounds, taking a break from walking all over the city, Old Bazaar and Fortress. James is reading some news on his phone while he knocks back a beer. “Riots in Santiago over the cost of living. Burning subway stations, toll booths and the electrical building. 8 people died over the weekend. It’s been declared a state of national emergency.” He shows me a pic of the tall electrical building ablaze on the top of it’s 20 something stories. “Shit dude. Interesting that it’s happening in Chile. That was the most wealthy and modern country we went through in South America.” “Which may only further the classism and inequality.” “I suppose. Wonder when the class wars are coming to the U.S.” “Billionaires versus peasants. Should be fun.”

There’s a nice breeze in the alley here and the beers are really hitting the spot. Some chanting starts at around 1pm from the mosque loudspeakers. “Ok picture this but with the terrible and awesome karaoke girl from Vilnius doing it.” “Hahaha oh man. She was great.” “Still lots of day left, wanna regroup at Mickitos and see what else we wanna do?”, “Yep, maybe ask about that canyon.”

Back through the colorful Old Bazaar. I’m liking this spot. And the proximity to our hostel is perfect.

Looks like the umbrella-covered alley trend is working its way worldwide. They just did something similar in Redlands last year. The Redlands one is cool and all, it just doesn’t have the millennia-old bazaar vibe.

We get back to Mickitos and take a quick breather. I get changed into some shorts cuz pants are dumb. Grab a daypack, some water and Narcopiggy for the next phase of the day.

We get back downstairs and ask the girl at the cash in the cafe about the Matka Canyon. “You must ask Micki.” She points to a table outside. “Ok, thank you.” “Nothing. Bye.”

That’s interesting. I’ve heard locals here say ‘nothing’ several times now. They use it like Mexico/South America uses ‘de nada’. But they don’t say “It’s nothing”, they just say “Nothing.” Sounds odd at first but with everyone using it, I’d say it’s universal in these parts.

We go up to the table. There’s a few dudes just chilling with drinks out in the pedwalk. “Micki?” “Yes that’s me. Are you Jonathan?” “I am.” “Welcome. Welcome. I hope everything is good.” “It’s excellent man, Thank-you. We were wondering about the Matka Canyon. In the kitchen there’s a sign for a tour.” “Yes, yes. Do you want to go now?” He’s already putting out his cigarette. Is he driving us haha. “Yes sure. If we could.” “Yes of course. Come, let’s go.”

Shit. Guess he is driving us. Alrighty then, Matka Canyon, let’s go!