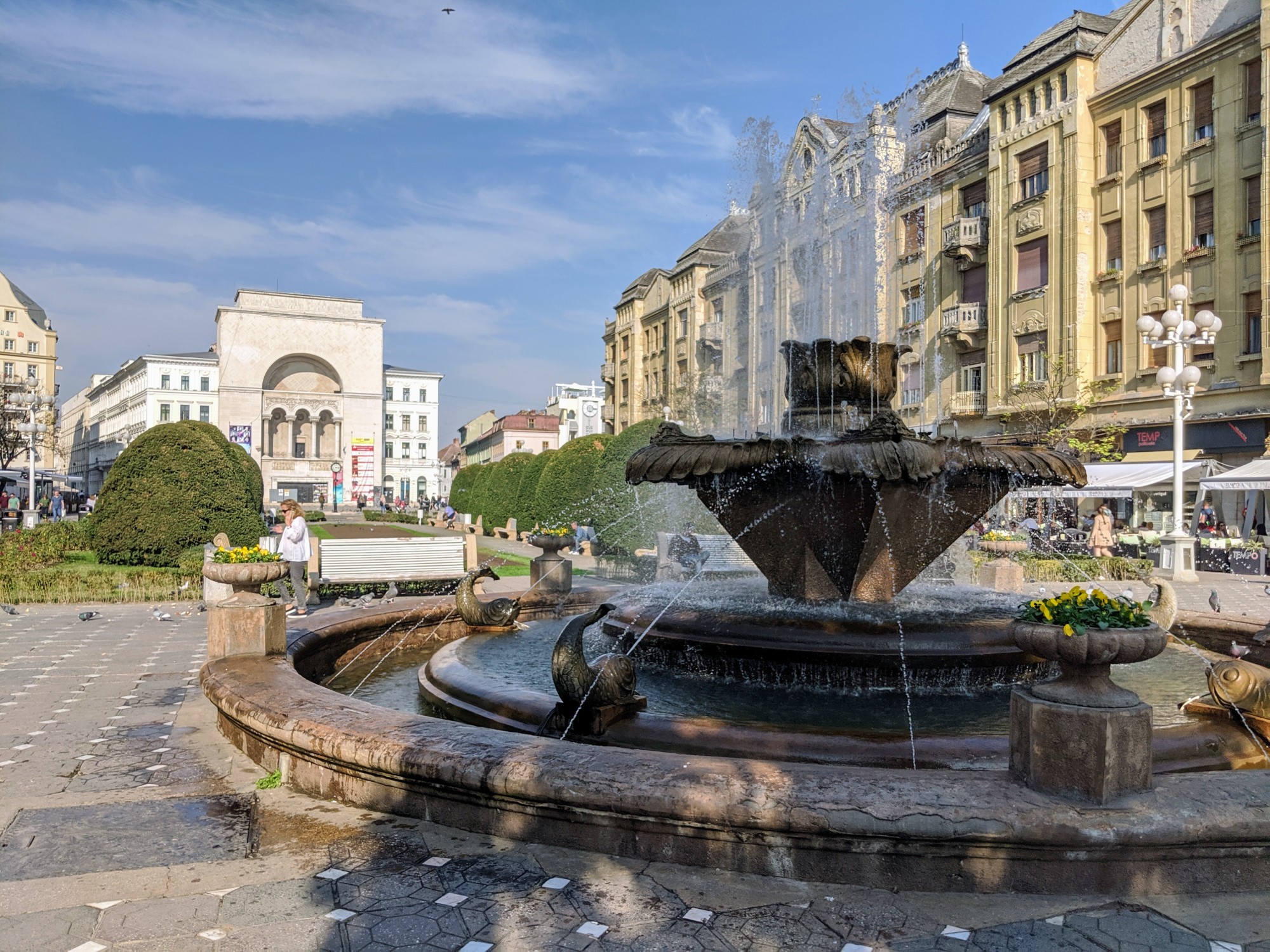 We push off from Freeborn and follow Raul’s instructions West to the first of the Timișoara squares. The Castle of Huniade is basically right beside Freeborn, but as Raul said it is closed for renovations and the whole building has a case of the drapes. Victory Square is beside this. It’s mainly dominated by the The National Theatre of Timișoara . 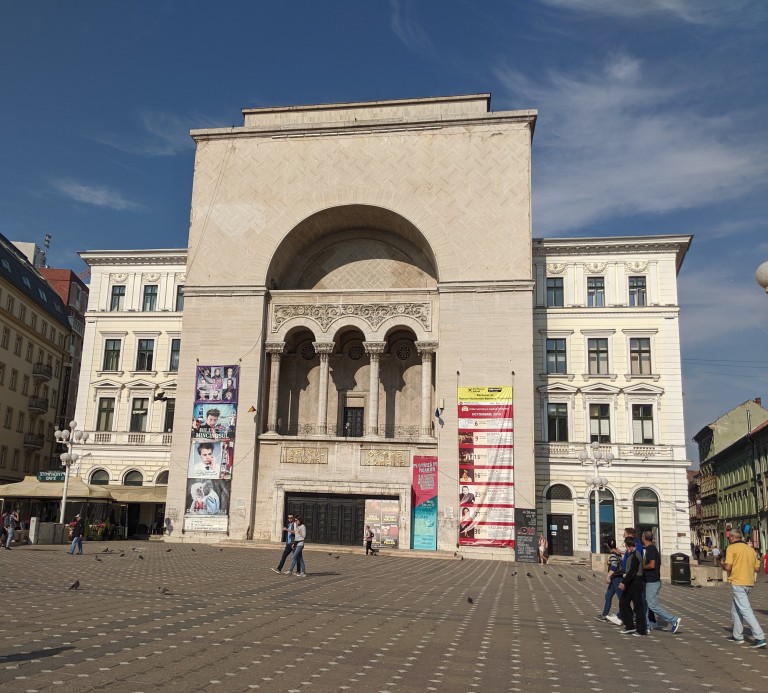 Whoa Tosca is playing here?! I was just listening to them on the train. That’s impossible. It must be a rendition of the opera named Tosca from which Tosca is named, who’s first album is Opera.

There’s a lot going on at this theatre, 10 different productions in October alone. That’s impressive. Somehow we’ve managed to land on a day with none of them. Billy Minsinosul looks like it may be good. What’s that about…

Looking Southwest from the square is a nice walk with manicured gardens, badass old buildings and a tall church bookending it all.

Back towards the theatre. Timișoara is quite the looker already. 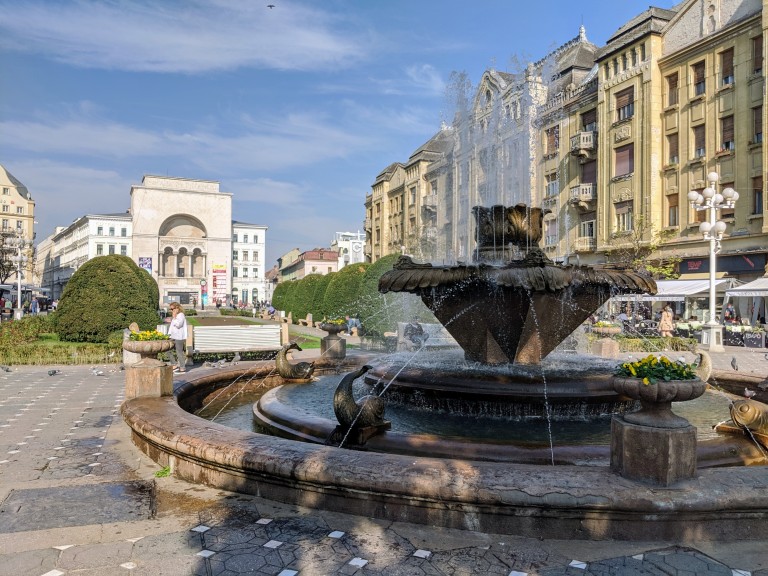 This interesting looking Neo-Moldavian church is the Timișoara Orthodox Cathedral. It is the tallest church in Romania. 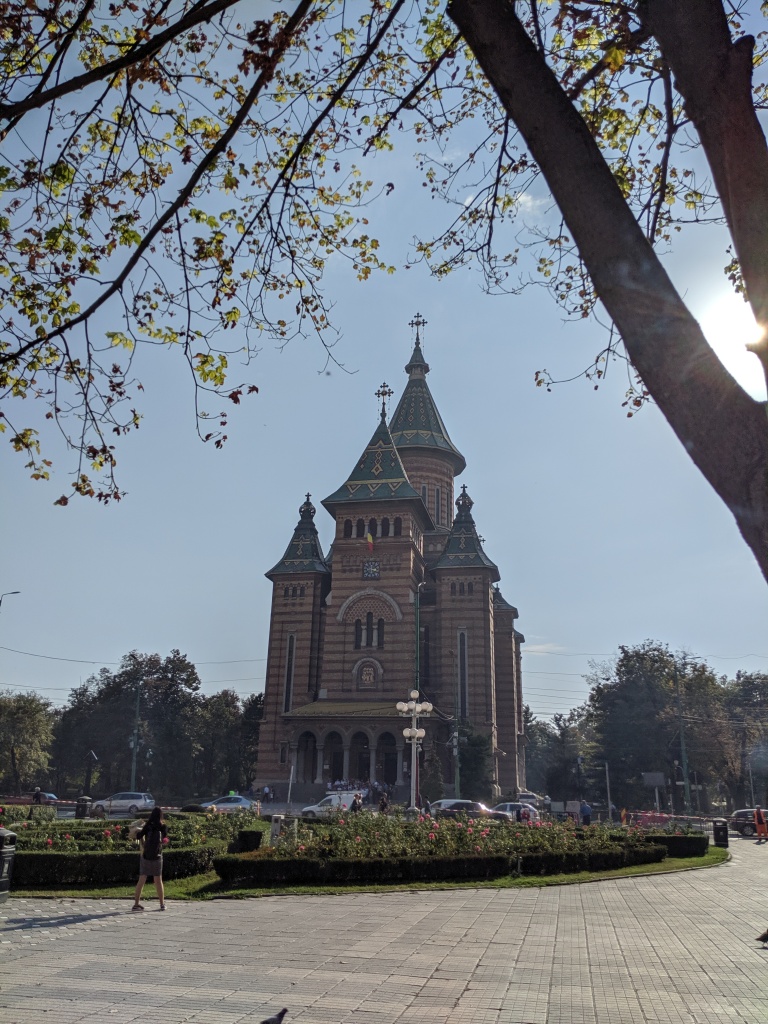 We backtrack along the gardens through Victory Square and North to the next one. Getting a sweat on now. It’s warm for October, must be scorching here in the summer. I guess our initial reasoning for Plan B has come to fruition: Head South and ditch the rain.

As we approach Liberty’s Square we’re greeted by a gothed out electric guitar busker absolutely shredding a finger tapping solo over a backing track. “That’s metal as fuck!”, MacKay tosses some euros in the case and gets a headbanger salute in return.

Another nice square. Lots of shops in this one and the Statue of St Mary

Another cool statue on the edge of Liberty’s Square

We keep trucking North down a little alley. This one has an accomplished accordion player in it rocking a traditional sounding ditty. Didn’t know Romanian’s were such musicians. Like strutting between Gobi and Mojave, her music fades out as we keep walking and a violin player mingles a fade in on approach of square three, Union Square. Yep this is the nice one. Colorful buildings, art museums, restaurants and a large green space in the middle.

We start scanning for a suitable lunch spot. There are a lot of good looking options.

We find a nice patio that should do the job at Bistro M. We pull up under the shade and have a seat. This is great. Timisoara, who knew?

MacKay goes for a carbonara and I get something called a Magic Burger that sounds crazy awesome. From the menu: Green bun (with spirulina), beef, red onion, cheddar, ketchup, tomatoes, cucumbers, bacon, lettuce, egg, burger sauce.

Ahhhh beer time. Interesting color for a pale. More of a light amber.

The burger and potato wedges are great. Lots going on with this burger. 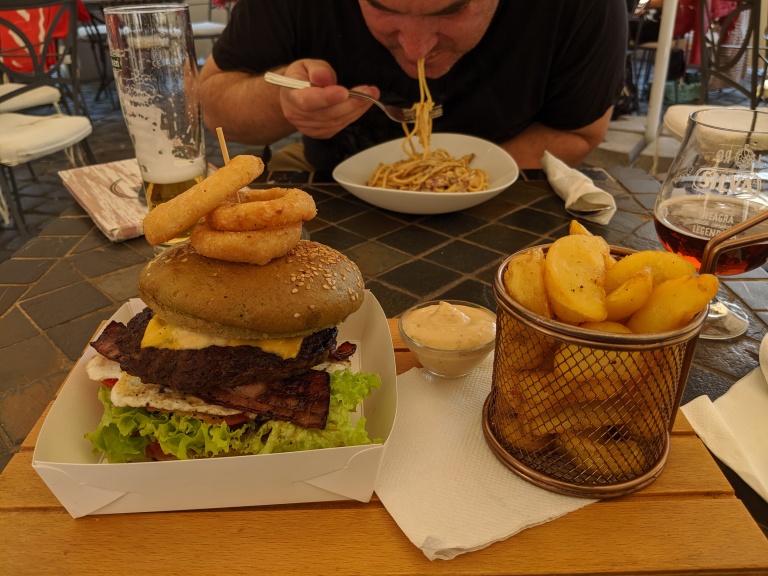 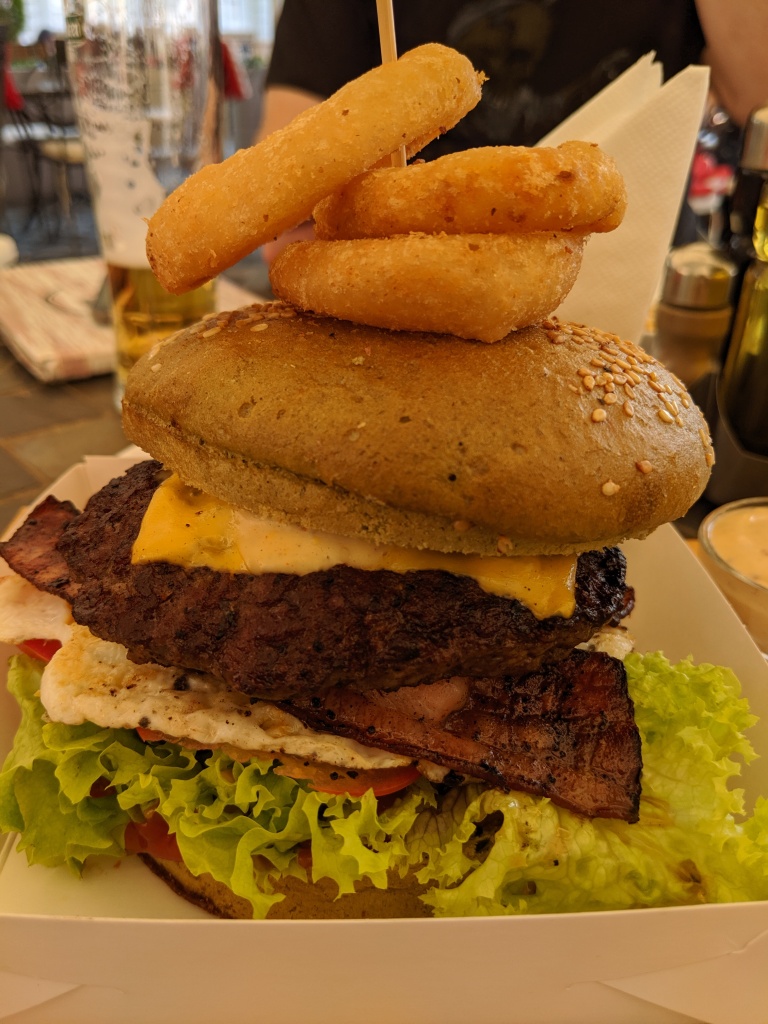 All fueled up. I order the Legendary Dark Silva and settle in. Whoa, this has some kick. Beauty day and a surprisingly pretty city. Things are working out. Zero tourists here too. Hidden gem indeed.

There’s a gaggle of 12 giggly teenage girls having a blast and politely eating burgers at a neighboring table.

I use my elbow to nonchalantly point behind MacKay, “Don’t spin around to look, but the guy smoking a cigar at that table behind you is Romanian Geoff Goldblum.” MacKay plays it cool and goes to tie his boot. He looks over and almost snorts when he sees him, “Fuck. Totally”, “Did I ever tell you about the time we met Goldblum at Coachella and played six degrees of separation with him?”, “Haha what?”, “Ya so…” 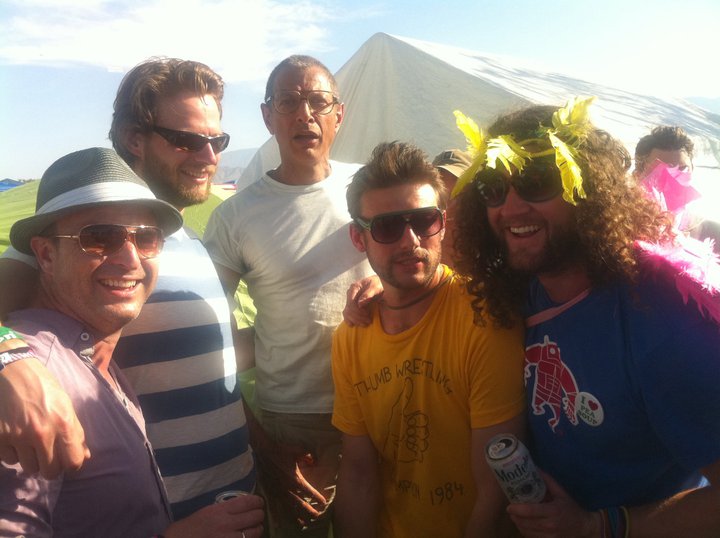 We wrap up lunch and are feeling somewhat sassy from the brain suds. Let’s see what else happens in this charming lil slice of Romania.