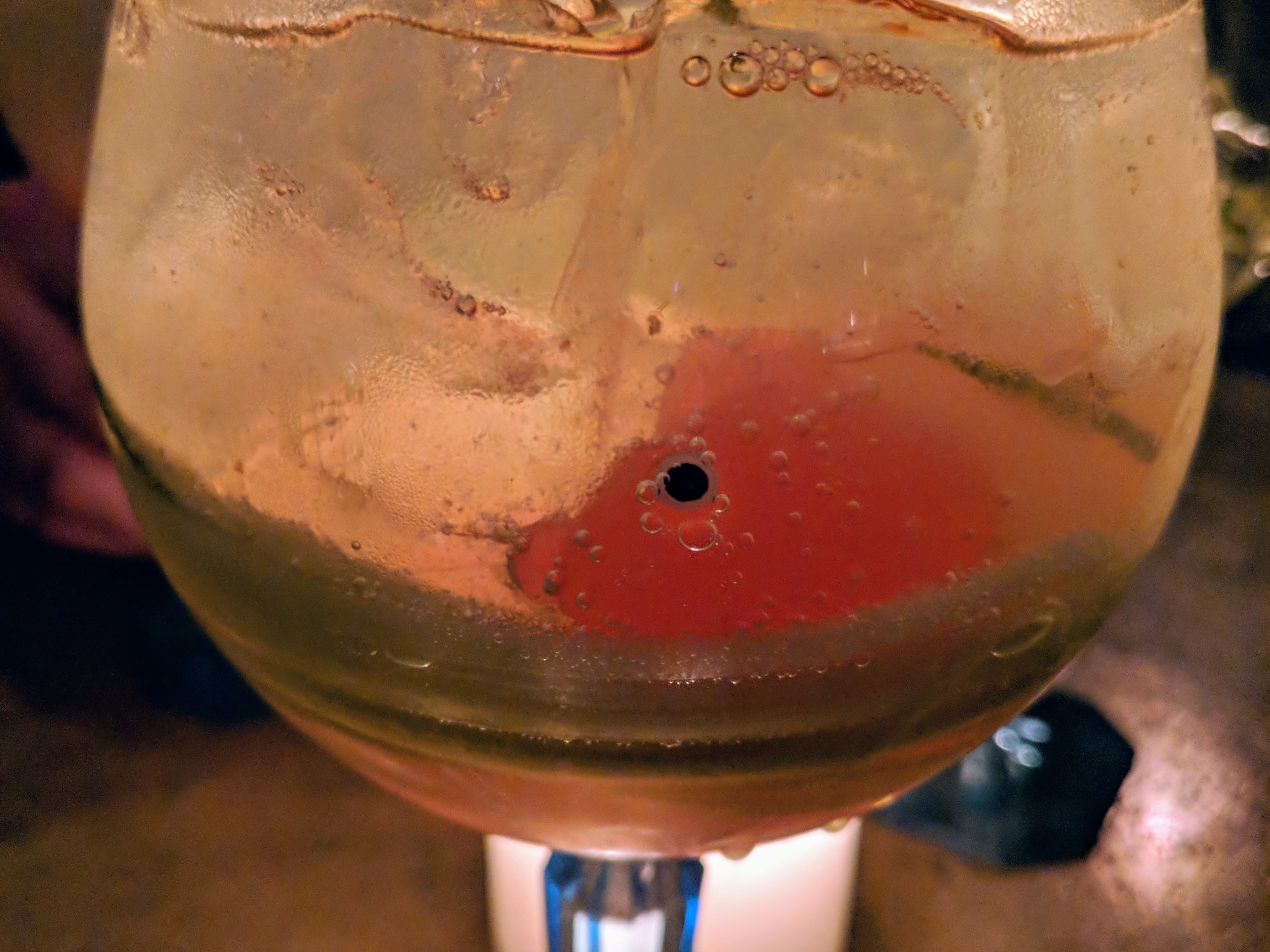 We finally come around to Long Street again. This is the area that we were in the other night when we met Francois at The Dubliner. Ahhh shit, it’s fucking Tracksuit Dracula trying to sell us coke again. Really? We start crossing the street immediately to get away from him, “Don’t ignore me! I’m not a dinosaur!” A few steps later and a guy comes up beside me and flashes some pouches, “Acid. LSD?”, “Let’s do all the druuuugs!”, “Yeah man, I got you!”, “Fuck. I’m kidding, get out of here. Don’t touch me. Shoo shoo.”

We bounce away from this sketch and now there are two dudes dancing, coming towards us. Great. One of the guys starts twerking on Drisdelle, it’s kind of funny actually. These guys are all smiles. We keep walking. “NOPE! No fucking way, man!” whaaaat? we spin around. Jamie has one of the guys in a bear hug, “Fuck you! Give it back!” Drisdelle has the guys arms clamped to his sides in a vice arm lock and he’s not letting go. “Dude, what’s going on?”, “This asshole took my phone!”

Now that Peter, Mark and I have turned around and are approaching and circling him, the thief changes his tune a bit. Well.. he’s obviously about to get his ass kicked. He starts smiling and pulls Jamie’s phone out of his pocket, “Ok, ok, you got me, you got me.” Jamie snatches his phone back out of the dudes hand, “Fucking prick!” We spin and let Jamie go in front of us. I keep a stank eye on the dude as we turn and walk away. Peter flashes the, ‘well that was fucking interesting’ eyebrows. “Fuck dude, that was close. That would have really sucked, getting your phone stolen just starting out the trip”, “Yeah, gotta be more careful for sure. Fuck that shit.”

We pass by a girl wearing a potato sack.

Drisdelle is a tad frazzled. Pickpockets suck. Time to duck into whatever decent looking bar there is and chill with an attempted-robbery cocktail. We spy a second floor balcony at some place and walk in. It’s called The Waiting Room. There is a narrow staircase leading up and then a guy taking cover. Should we bother? Yeah, we need that drank.

Walk in and it’s a weird shaped room with a staircase in the middle. There’s a DJ playing dance tunes I don’t recognize, probably SA. Over to the bar and get some G&Ts.

We hang for a bit on the dancefloor and I Beyonce up a little bit. Not really feeling it though so we hit the balcony. We take a breather at a table and Drisdelle’s eyes are still bugged out. “Yeah man, that was bullshit.” We’re definitely not feeling Long Street tonight. We finish our drink and go back in for another. Priscilla gets excited about something and runs over to the DJ. She flashes some cash and puts in a request. Oh shit, she didn’t.. Her giggle smirk says it all. All the Single Ladies, right?

We do that awkward dance you do after a few drinks and a pickpocket lights you up but the Beyonce song doesn’t drop. As much as I’d like to put my Beyonce moves on display for the mixed bag of whackos in here, after a couple tunes we’re basically over it. 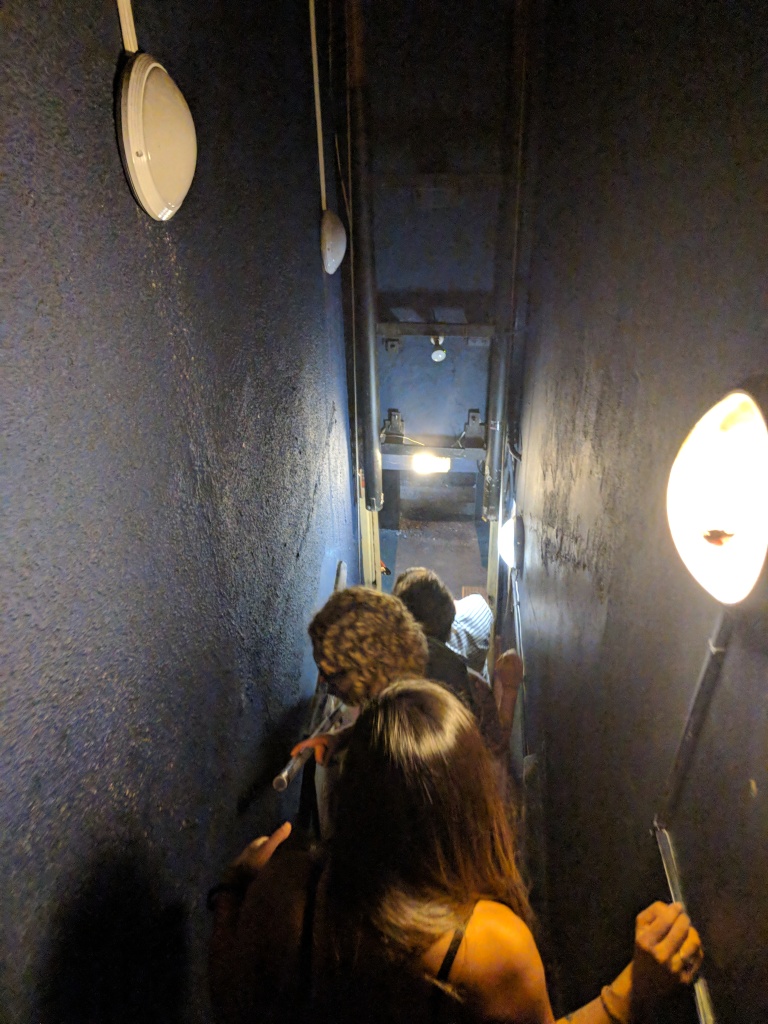 Long street suuuucks. Dirty tourist trap of dive bars and sketchy as fuck. I would rather pay premium cocktail prices to not be harassed by bums, drug dealers and thieves, soooo..

Return to The Orphanage

Back to the orphanage. Bad ass. There’s a house DJ in here and he is the sickness. Waaaaaaay better vibe already. We start to calm down and get back into the swing of things.

Anthony Kiedis is back at the bar and is pumped to see us again. Wait a minute.. I own that same shirt. 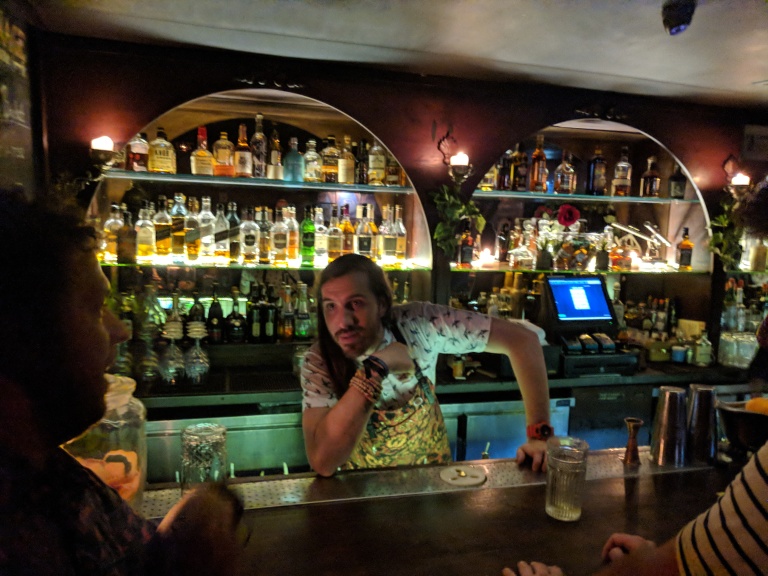 A couple Swim and Tonics my good man. Priscilla’s photo technique seems to work every time. Love the goldfish. 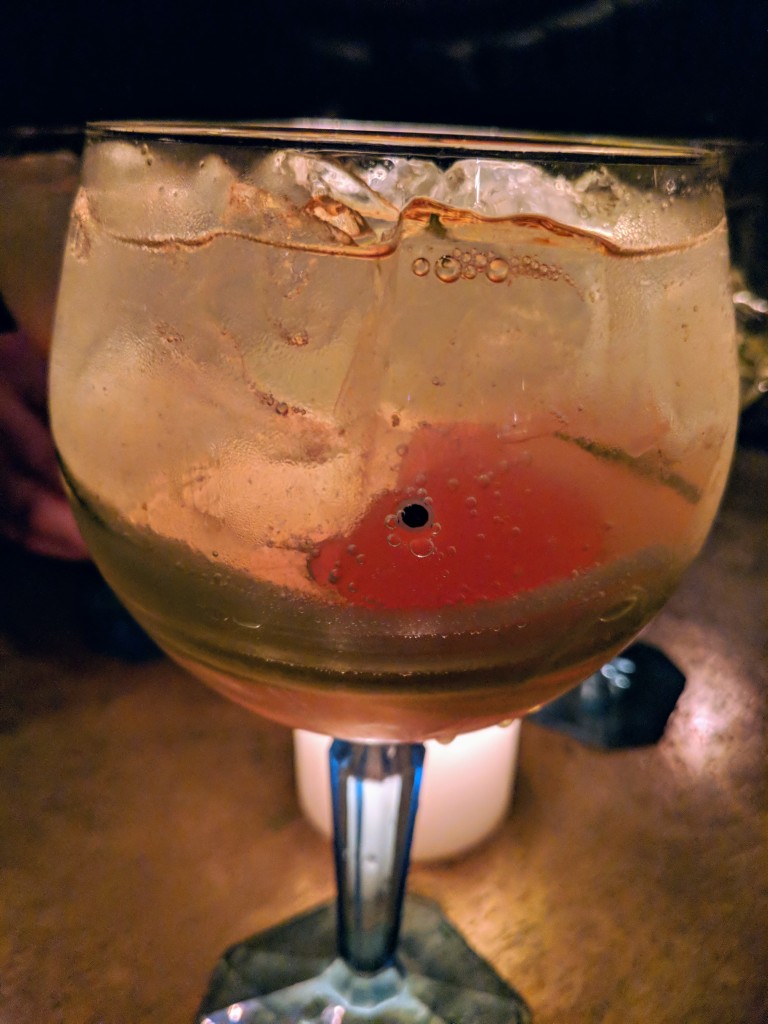 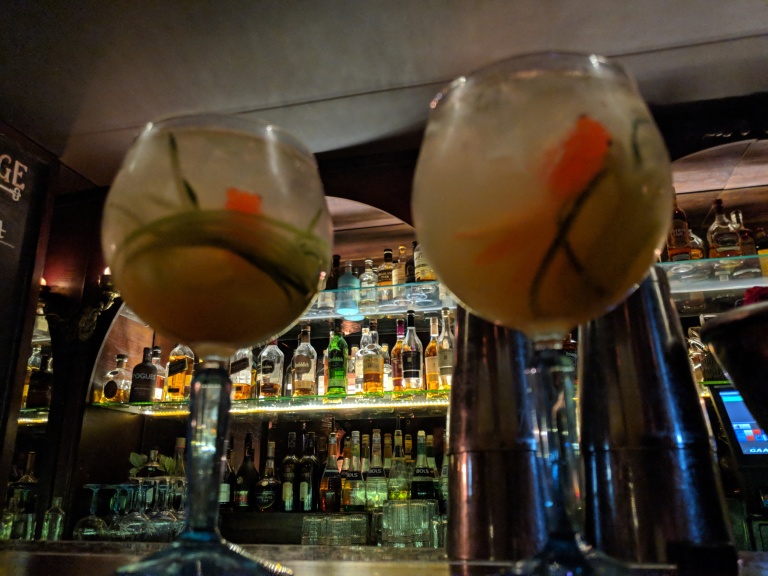 This place is super cool. Good call coming back here. 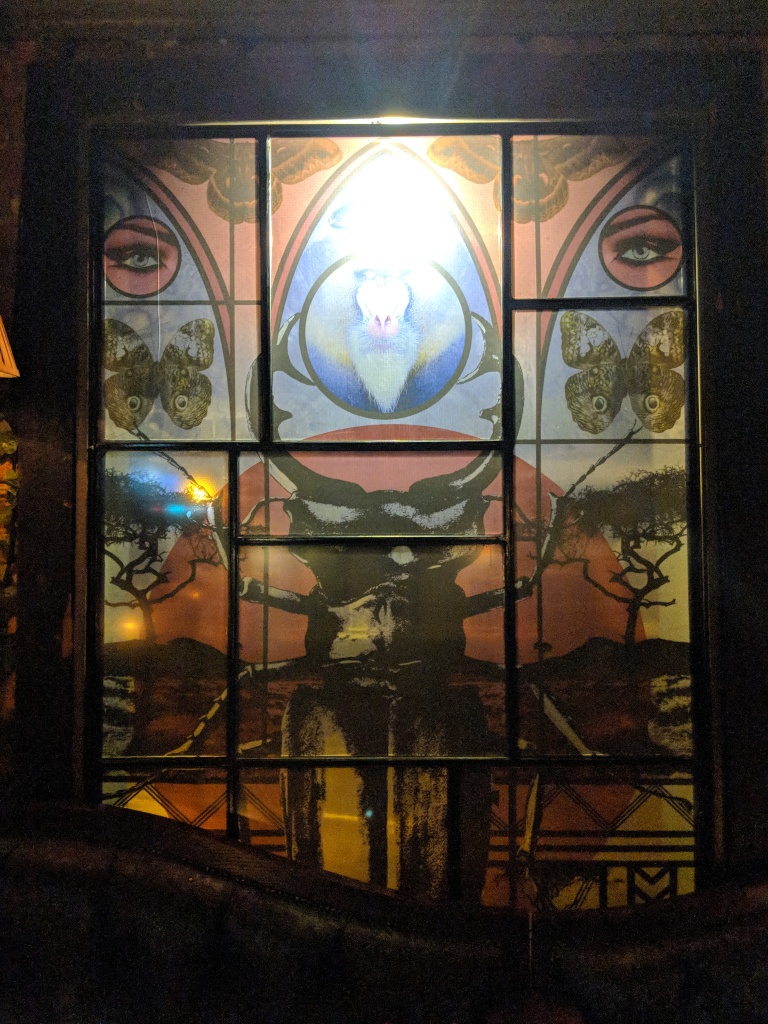 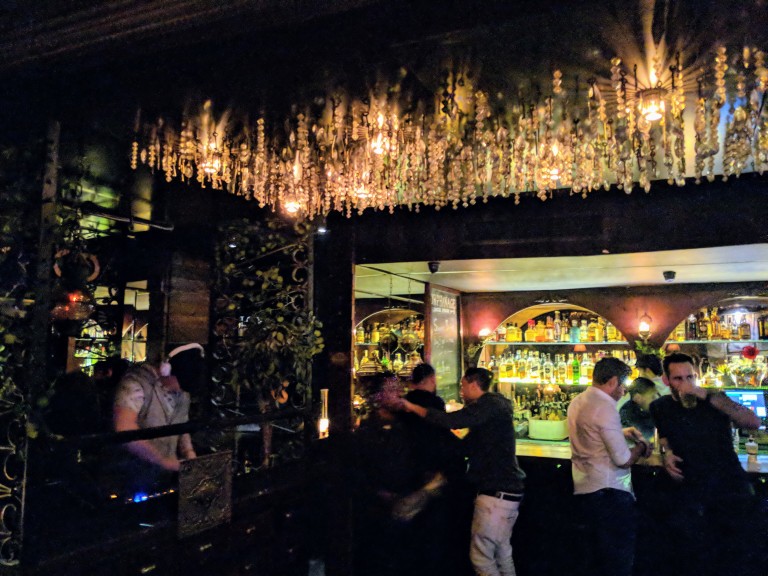 We grab a table and tear into the cocktails like it’s the last day on Earth. Amped and ramped.

Anthony Kiedis comes from under the bridge like an aeroplane with a fresh batch of knock me down and we’re in a parallel universe and can’t stop the spirits when they need you.

He snaps a group shot of us

Then the chair dancing starts 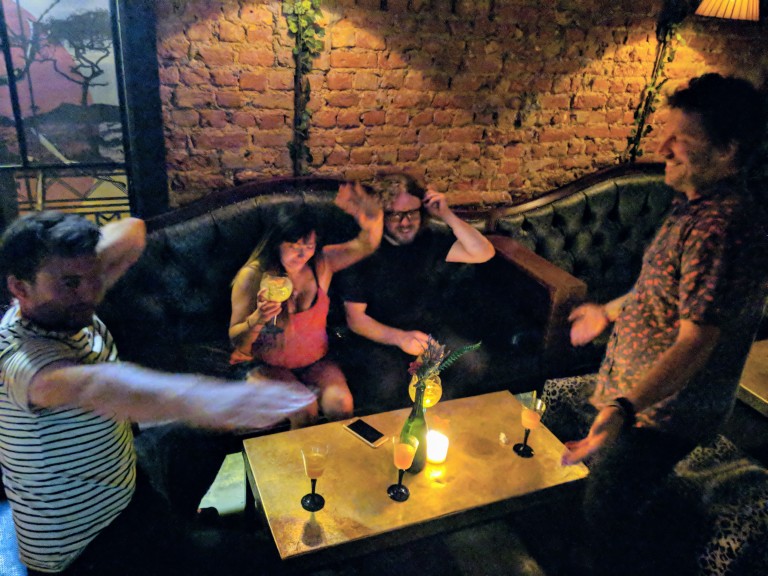 Soon the staff is saying that the place is closing up but we can still take our drinks outside if we want. We want.

We start playing with our drinks. 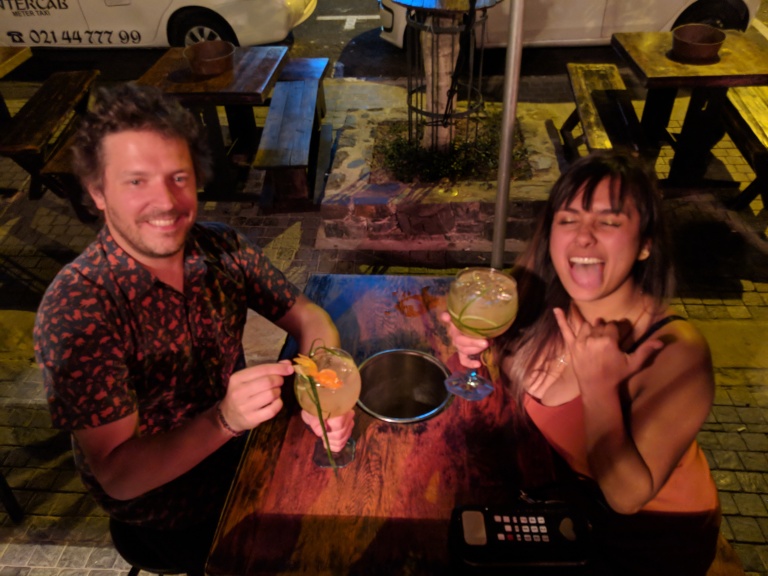 We define the pact of the goldfish: wherever Priscilla goes she’ll take pics w the goldfish in it and send it to us and vice versa.
(Yes, we’re stealing these stupid goldfishies)

Oh the place is really really closed now and they’re kicking us out. Here’s what I think about that 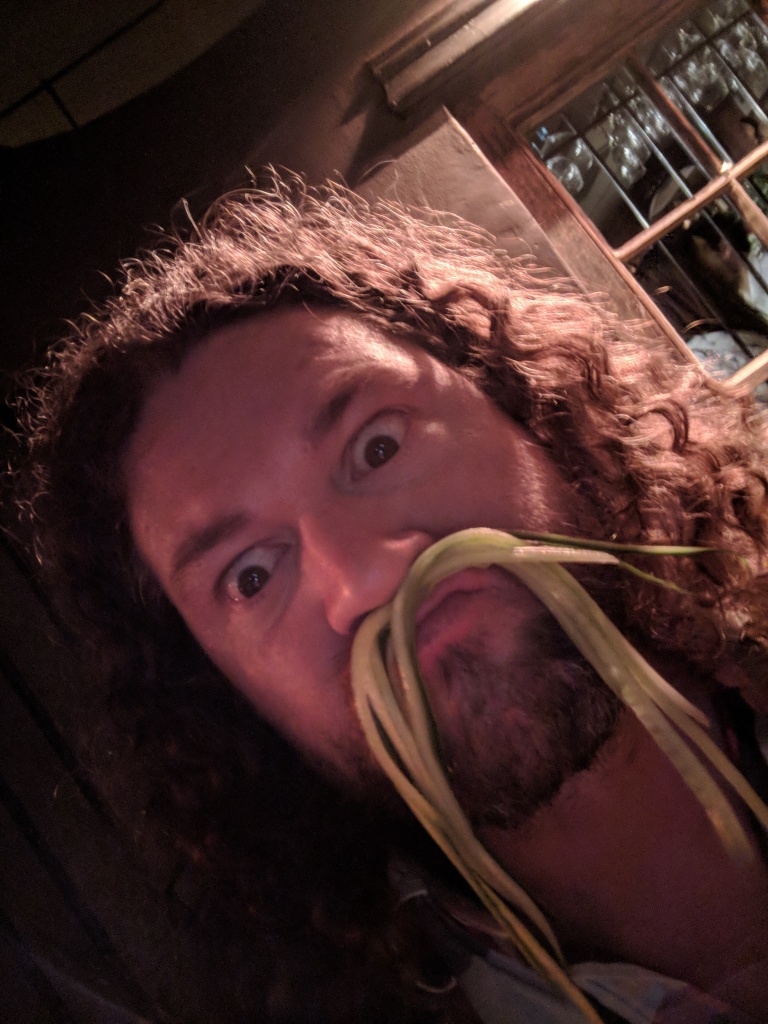 We are a messy bunch now and trying to find our way home through the empty streets of Cape Town. We find The Backpack and pour ourselves into the common area. There’s no one around. That’s probably for the best. Drisdelle is wiped from travel and heads back to the room. We’re not quite done yet. “Time for Hacky Sack?”, “Holy shit, yes”

We get in a circle and throw down on hacky sack. Except we can’t. “Ok ok ok ok ok”, Priscilla is holding onto my arm for balance. She just keeps repeating “Ok ok ok ok ok” and we can’t help but laugh every time. We’re useless. Hacky Sack is impossible. I think our max count gets to about three. We’re howling at the sky with each miserable attempt. This goes on for much longer than it needs to until we finally accept defeat and settle into the chairs.

There’s a vending machine and we’re struggling to put Rand together for a single beer to split.

Priscilla has her head on the table now, “You’re schtoopid, you’re so schtoopid. You’re schtoopid” is her response to all of our silly drunk banter. “Listen to your shaaaaaaart”, we’re cackling at the moon. We put a goldfish on her head and walk her back to her room.

The first picture in Pact of the Goldfish

Alright, we’re idiots. We gotta hit the road tomorrow and finally get this SASS underway. Time to call it. Back up to the room. Oh shit, there’s a cat in here. Must’ve come in through the window? It’s asleep at the foot of Jamie’s bed. Do we let it out? It looks so comfy. Whatever, just let it sleep. Who’s a cutie? Who’s a cute lil kitty? ok ok ok ok ok zzzzzzzz… 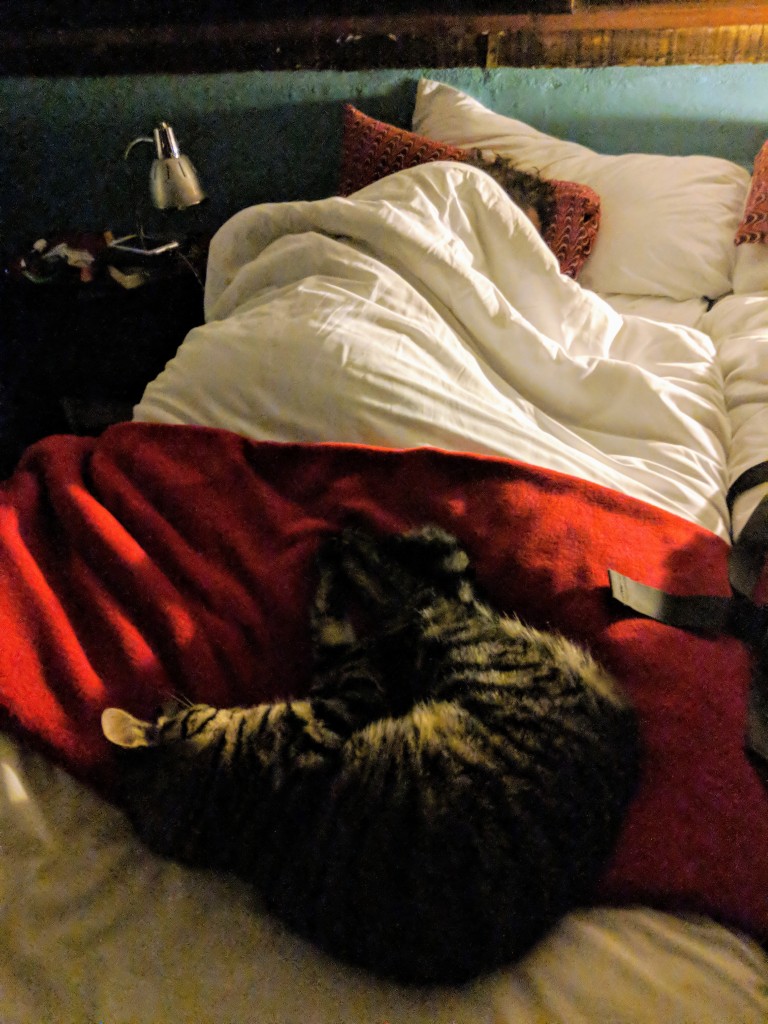