We get back to Waldo and Megan’s place and they are back from their work days. Peter and I are knackered and so we try to nap. Unfortunately, there’s a guy practicing skateboarding down the hill just outside the window. He gets to the bottom and runs back to the top to do it over and over again. All I can hear are the wheels rolling on the pavement and hitting every crack ka-kink ka-kink ka-kink. This goes on for quiet a while. From further up the hill I hear a neighbor’s kid yell, “Dad can you call an Uber? Mom’s being a bitch!” Lol, ok nap, good try. And I’m back up. Megan is giggling in the hallway, “Did I really just hear that?”

We present Waldo with the Monkey Shoulder we picked up for him. Just like giving Mandy the Boodles, once again we look like game show hosts. He’s never tried it before. I think he’ll be pleased. (Just noticed our pineapple theme continues on my shirt. Oh, and Peter’s too actually)

We get dad to call us an Uber because mom’s being a bitch and head across town to the Turbine Building to meet Waldo and Megan’s friends at some pop-up art exhibit thingy. We get dropped off outside and it immediately looks cool AF with a large abstract lettering installation that says ‘THINK’ and nice ambient lighting coming from the industrial-looking building that the exhibit is in. 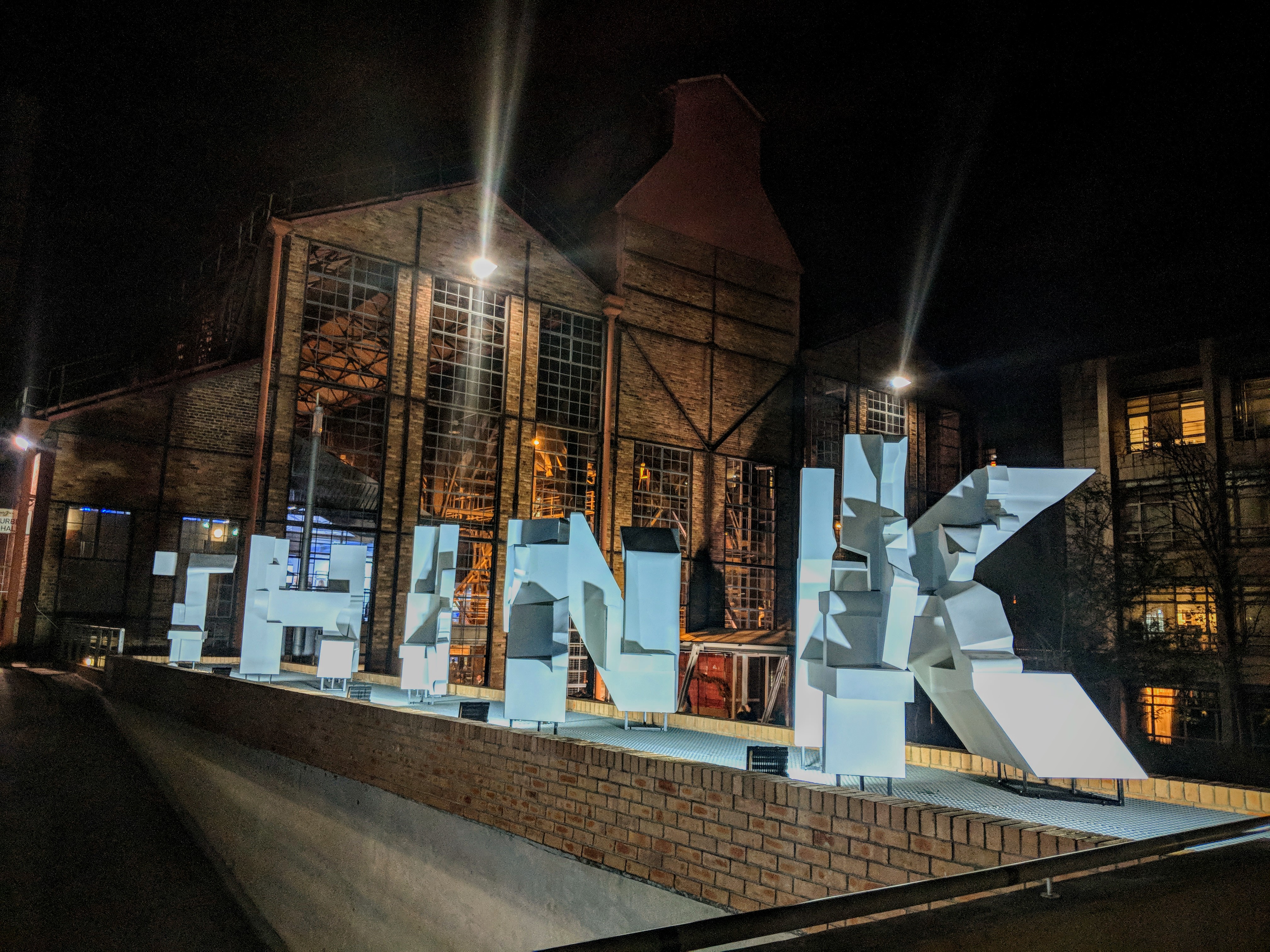 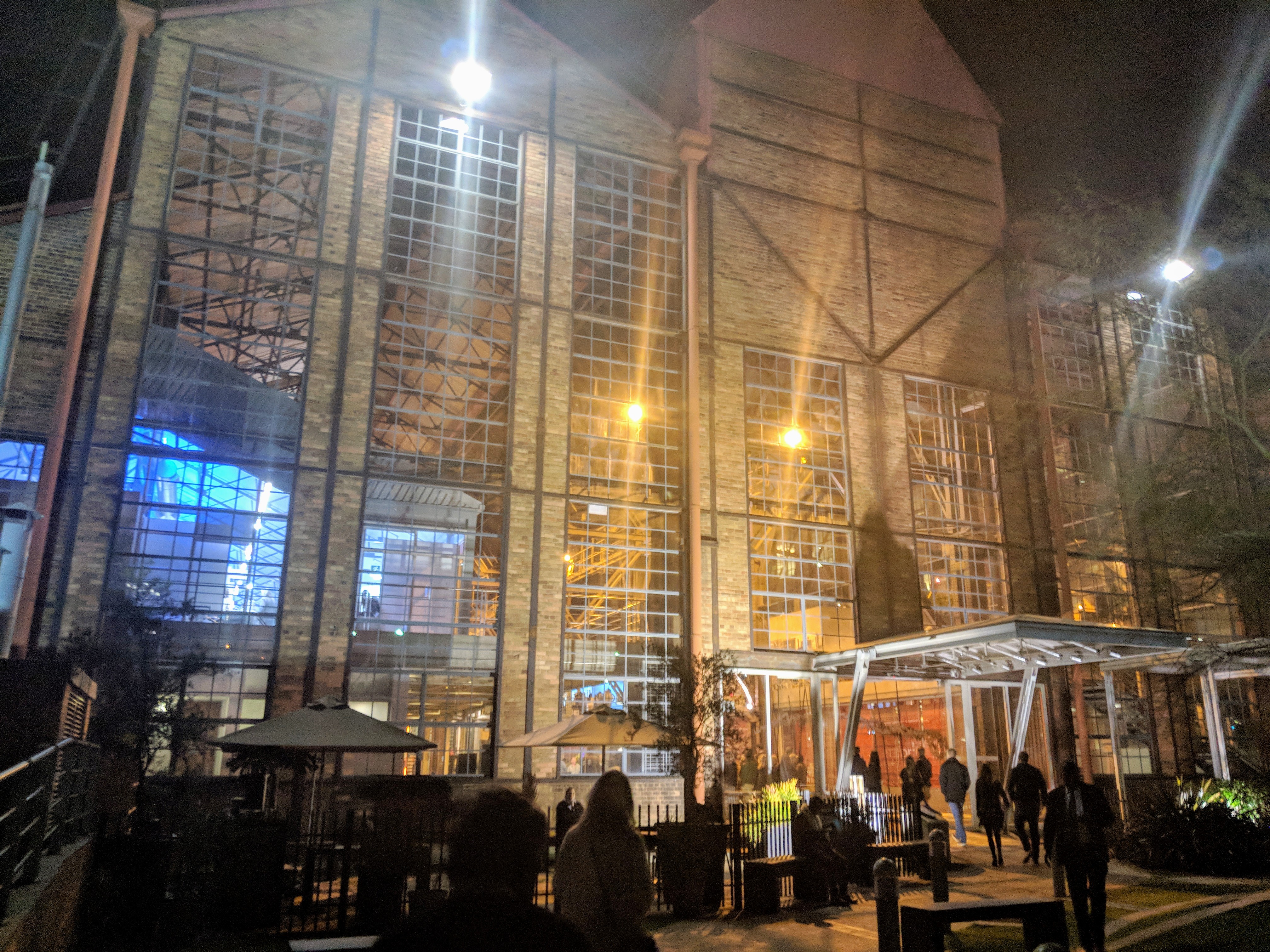 We walk in and a couple of the friends are here already. The others show up soon enough. They’re all looking dapper and are quick to introduce themselves. It’s all smiles and clever jokes, seems like a good crew.

We walk in and to our right is a… thing… hanging that looks like if I’d pulled all of the old man’s beard off the trees at home, matted it together and hung it from some dowel. These are mimicked by some hung pieces on the wall. Waldo’s friend Dwaine is the first to comment, “Sooooo… what am I looking at here?” His friend Iline (possibly his gf?) is quick to reply, “Art, Dwaine. This is called ‘Art'”, he plays along, “Oh aaaart, I see.” These guys are hilarious.

Beside the old man’s beard is an eager fellow standing next to some hanging art with more of a contemporary, graphic novel style. He asks if we want to hear about it and the 10 of us gather around to see what he has to say. Using the art on the walls, this dude launches into a mesmerizing tale called “The Boy and the Cauliflowers”. We stand patiently listening as he describes the boys journey to several planes in search of a cure to a disease. It’s an elaborate story that I won’t even try to recreate here. The art and the story are great. 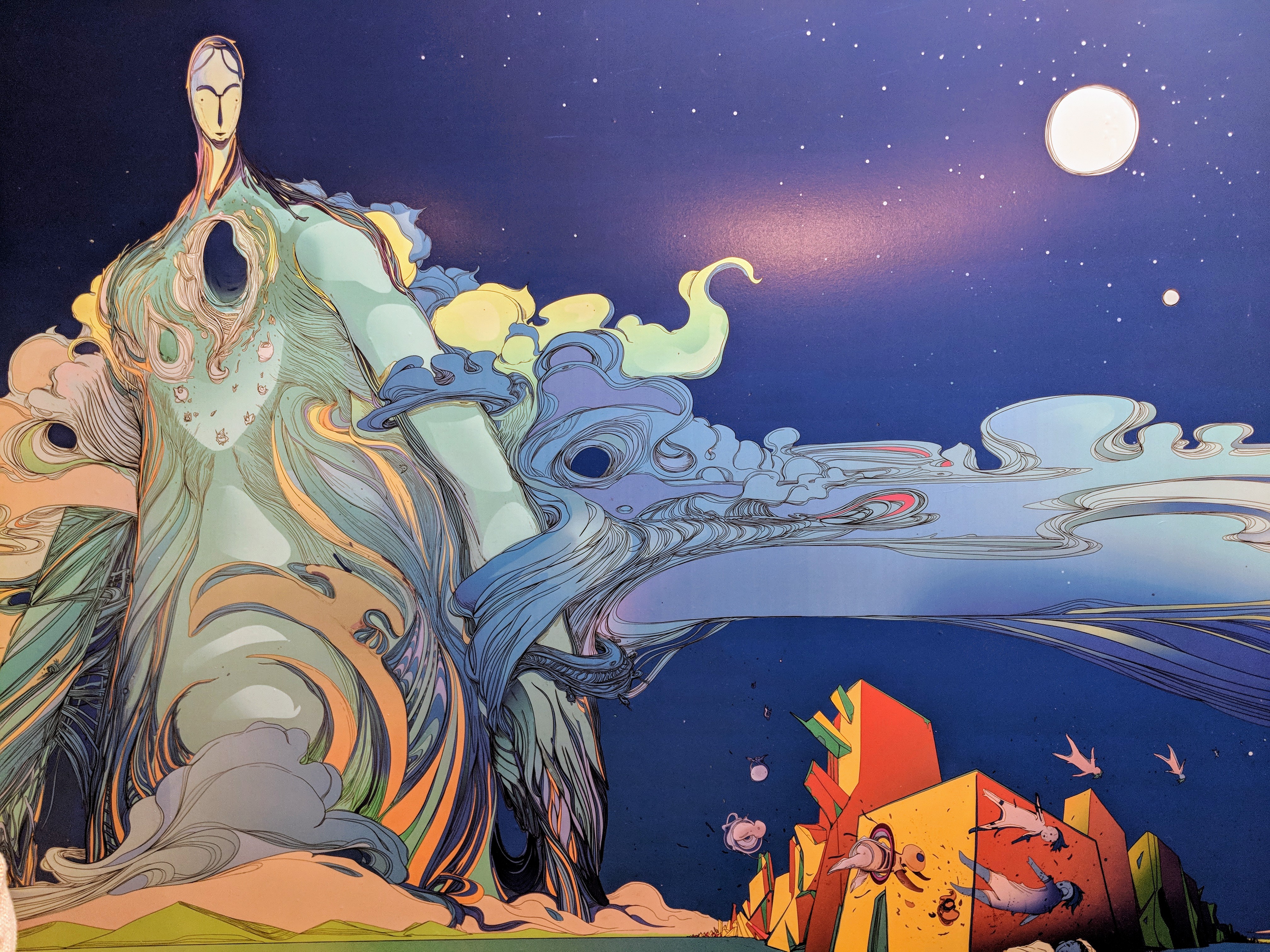 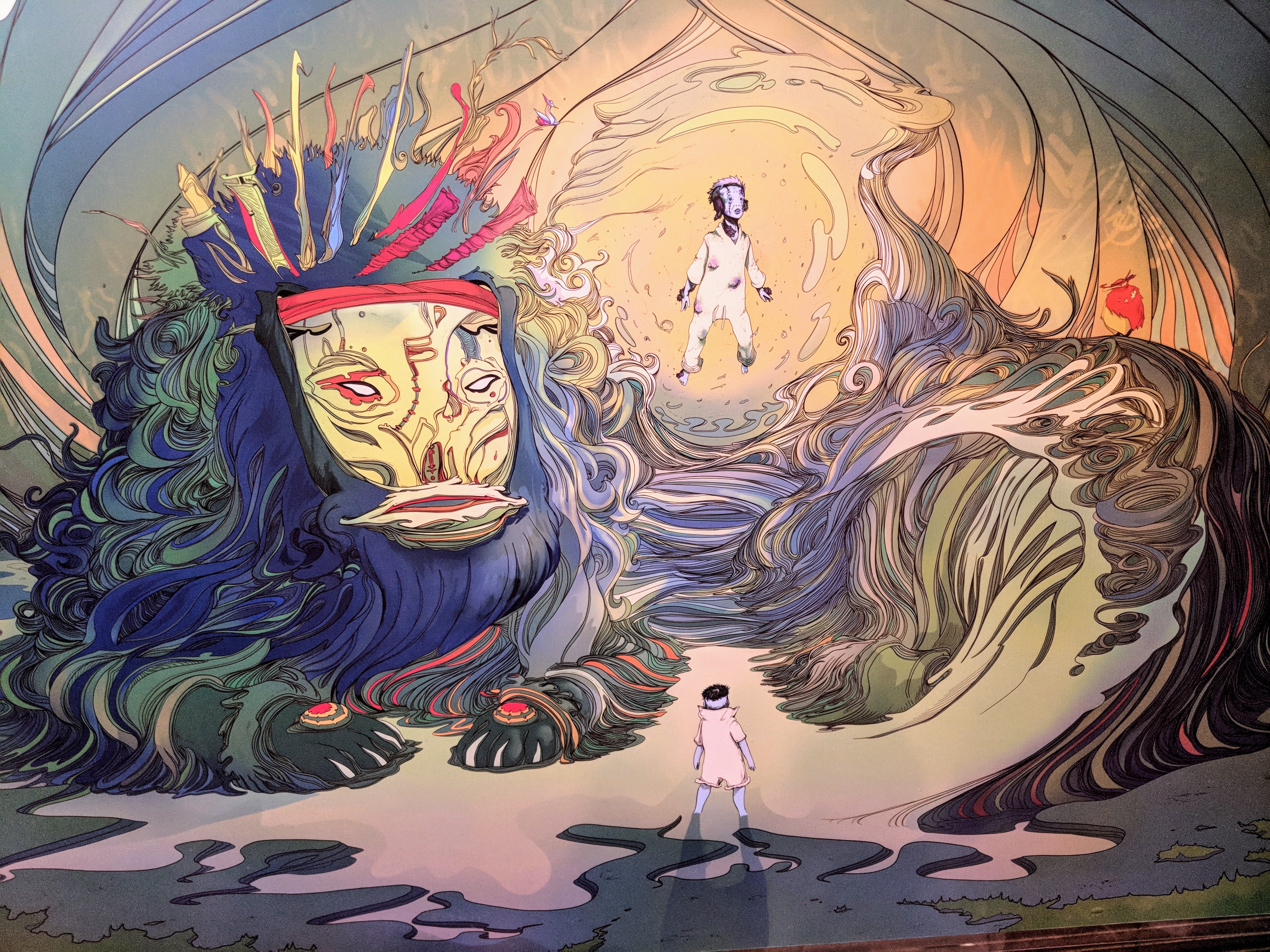 He also shows us an interactive site that is under construction that will have the user solve mini puzzles in each art piece to progress through the story. Pretty cool idea. I get us through the first page by simply moving the word ‘Cauliflowers’ into the white banner.

After this, the group decides it would be foolish to look at any more art without a drink in our hands. We head upstairs to the bar and order a few bottles of wine to split (I knew I’d like Waldo’s friends). While we’re waiting for the wine, several people tell us to move out of the way of a tv where people are enthralled with a tennis match.

Wine in hand we continue to mill about the art works. 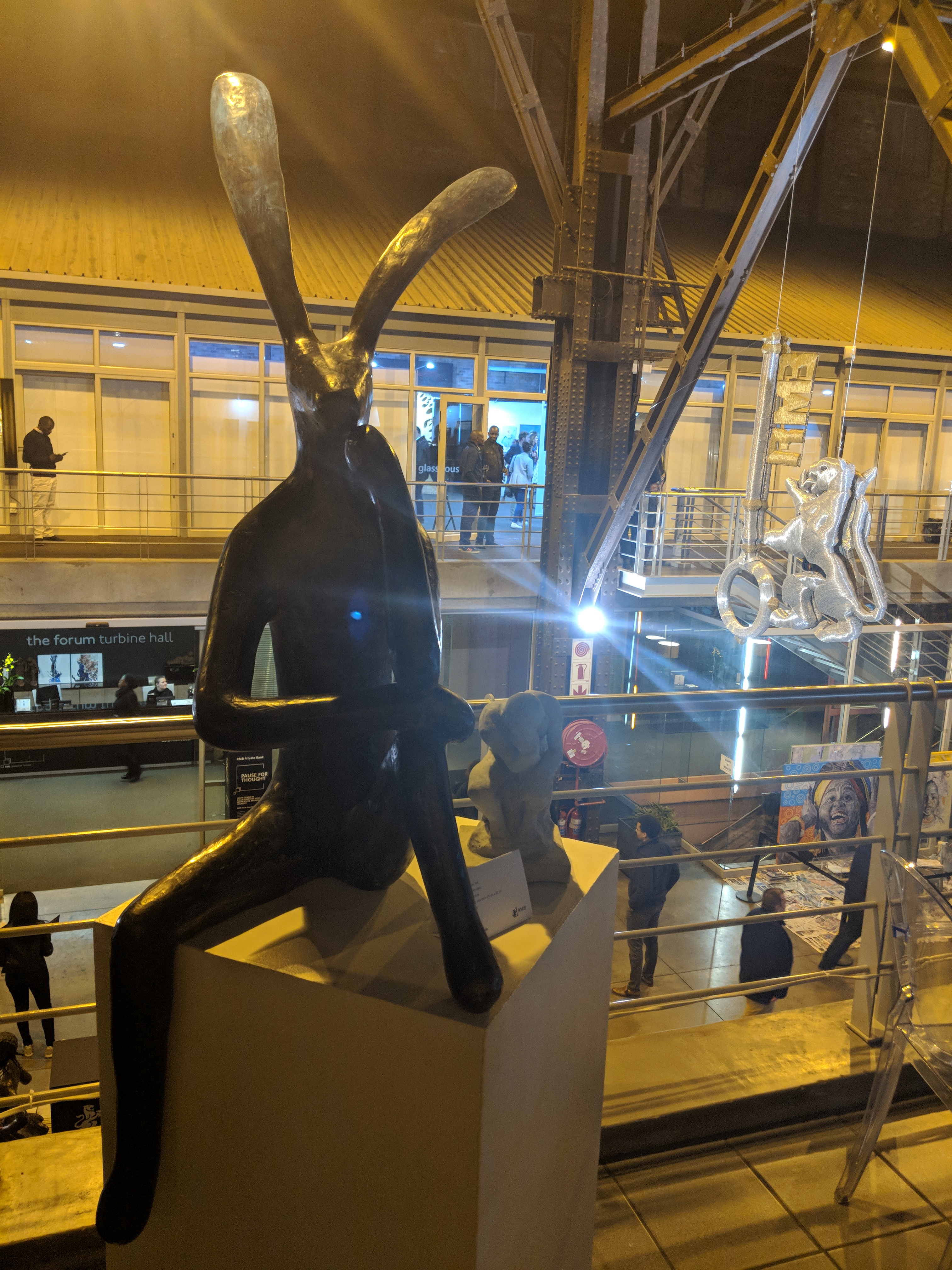 I like this one where the artist threw a bunch of pictures of himself into some post-apocalyptic, otherworldly, revelations type of shit and added animal appendages and extra arms and heads to himself in a chaotic collage of… this. It’s lit as fuck 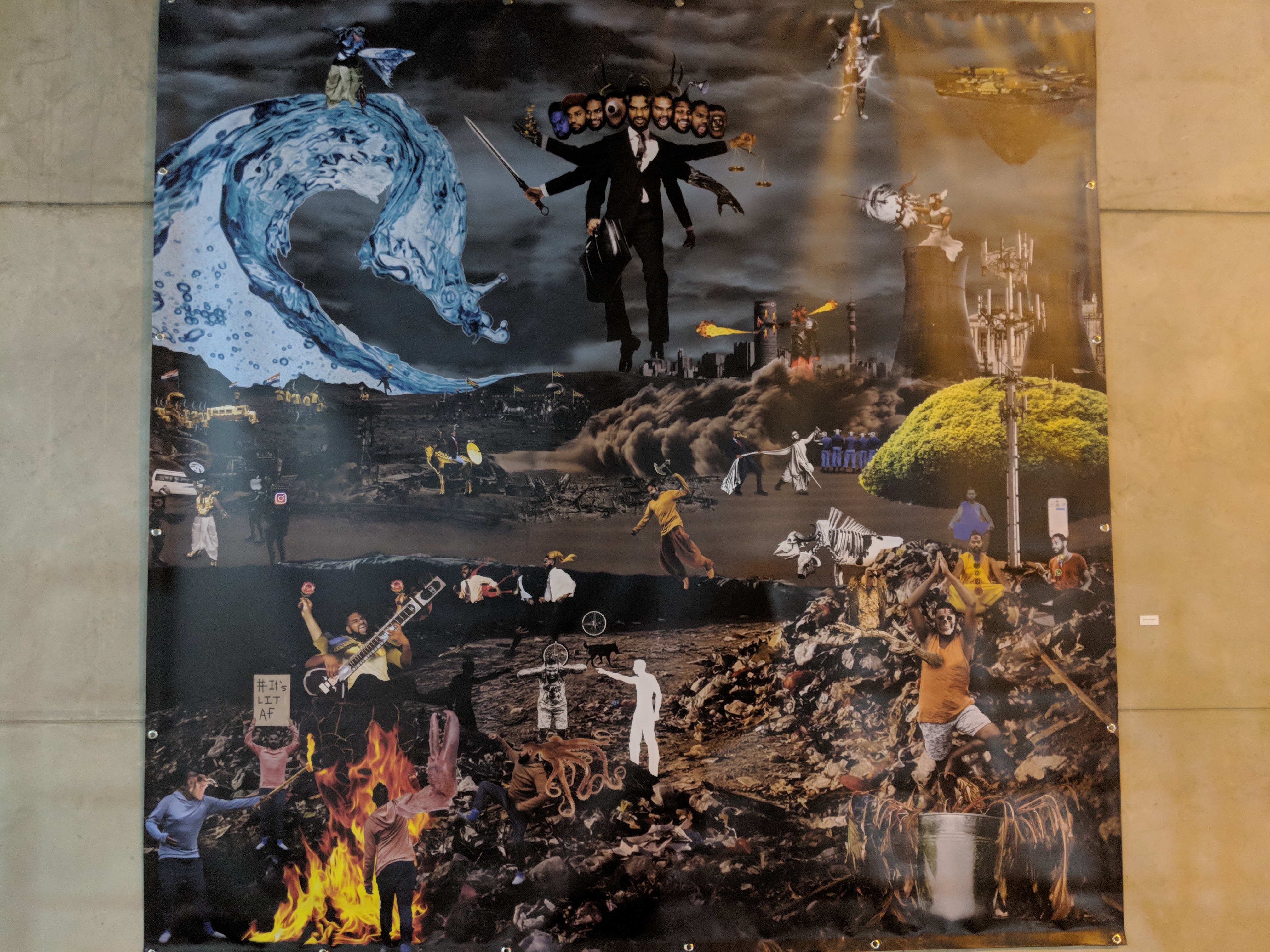 And this reminds me of… wait, isn’t this the album cover to Radiohead’s Hail to the Thief?! What’s that doing here? 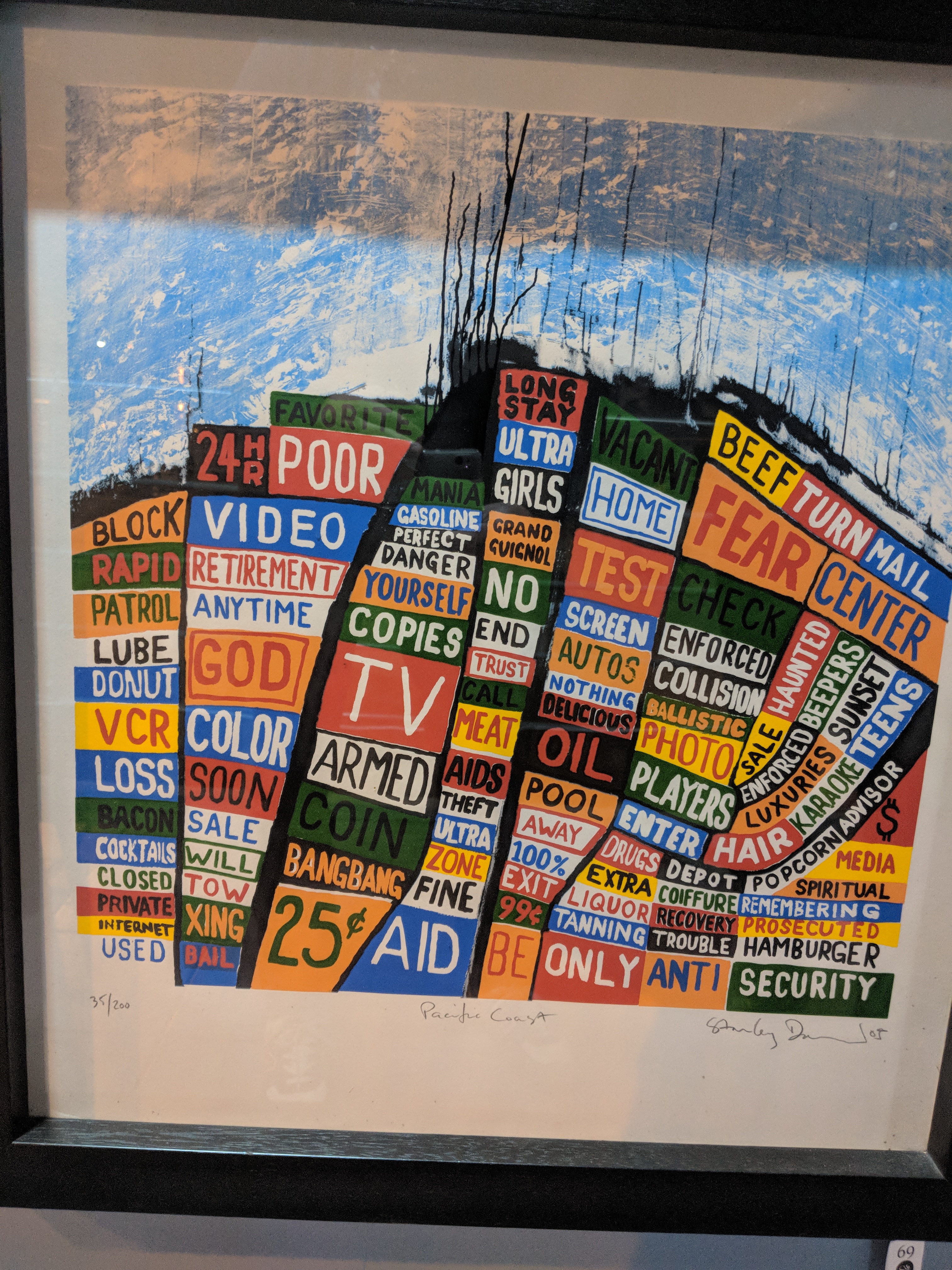 There’s even a painting here by Waldo’s uncle, Carl Buchner. “Well let’s get a picture!”
It’s called ‘Boy in Red’

Waldo points to a picture of some old dude that looks like he just landed from a space disco. He says the guy’s name is Walter Battiss. He was an abstract painter from South Africa, “A bit loony, he started his own imaginary island nation called Fook Island and had a flag, stamps and passports. He invented his own currency and language for it. Kinda nuts. He used to wear his pajamas to the cinema.” (I refrain from admitting to Waldo that I also wear pajamas to the movies sometimes and that this Battiss guy sounds like he’d be a badass Dungeon Master).

We move into another section of the exhibit. Damn, this place is massive. We scan around getting pics of lots and lots of inspiring artworks from paintings to photos to sculpture. We’ve got some good wine so we just take our time. Here’s a sampling 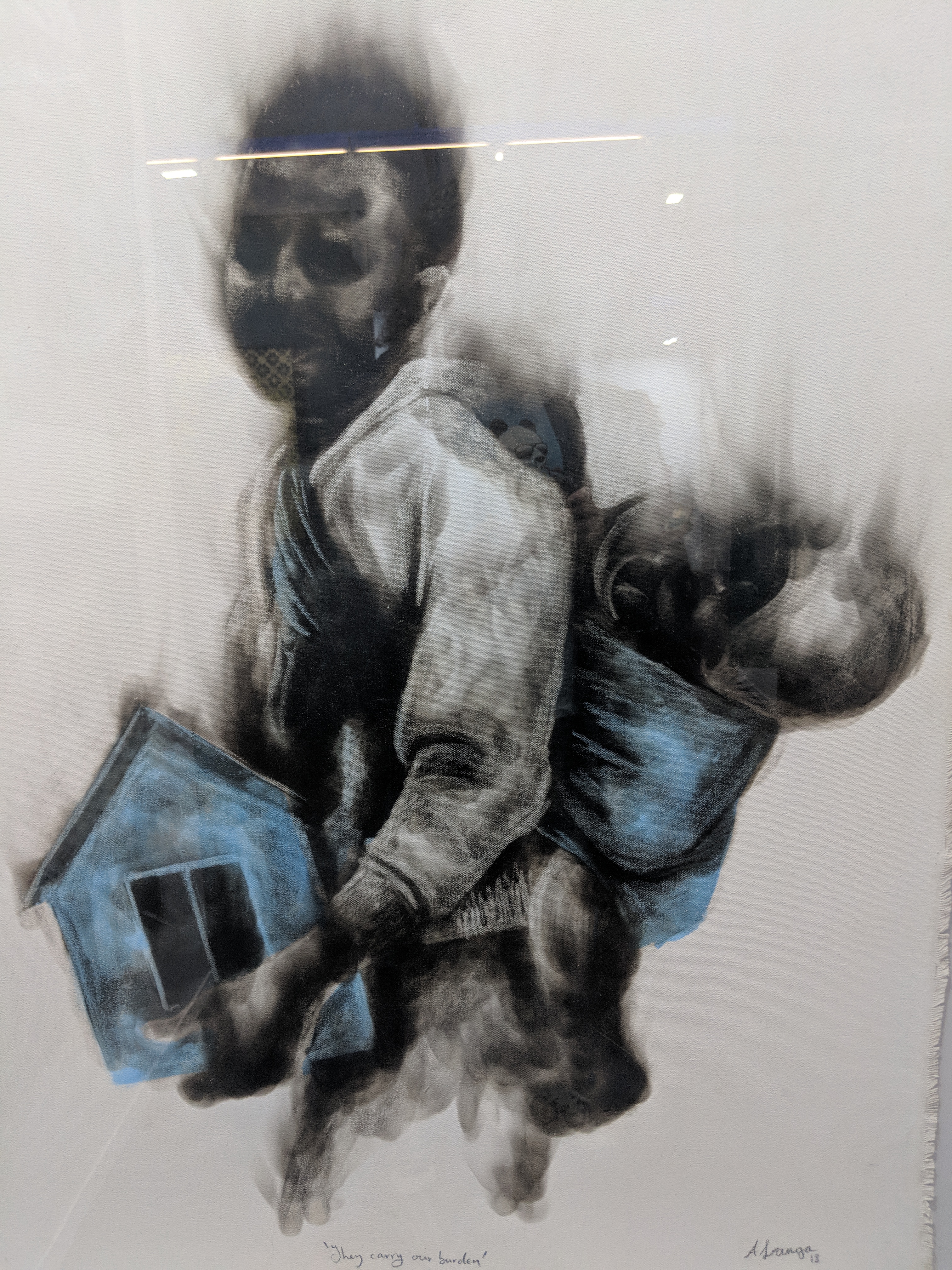 These were super cool 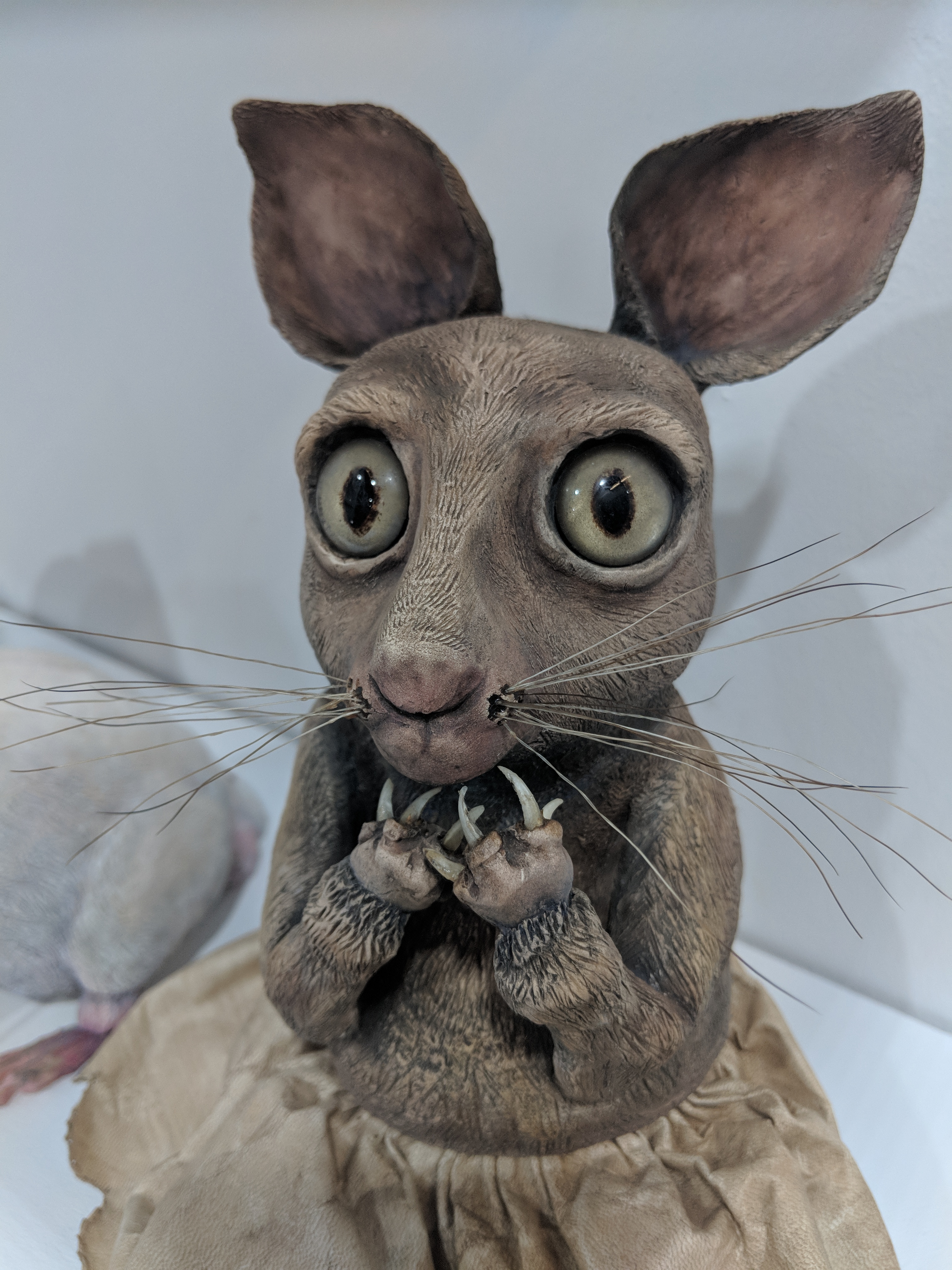 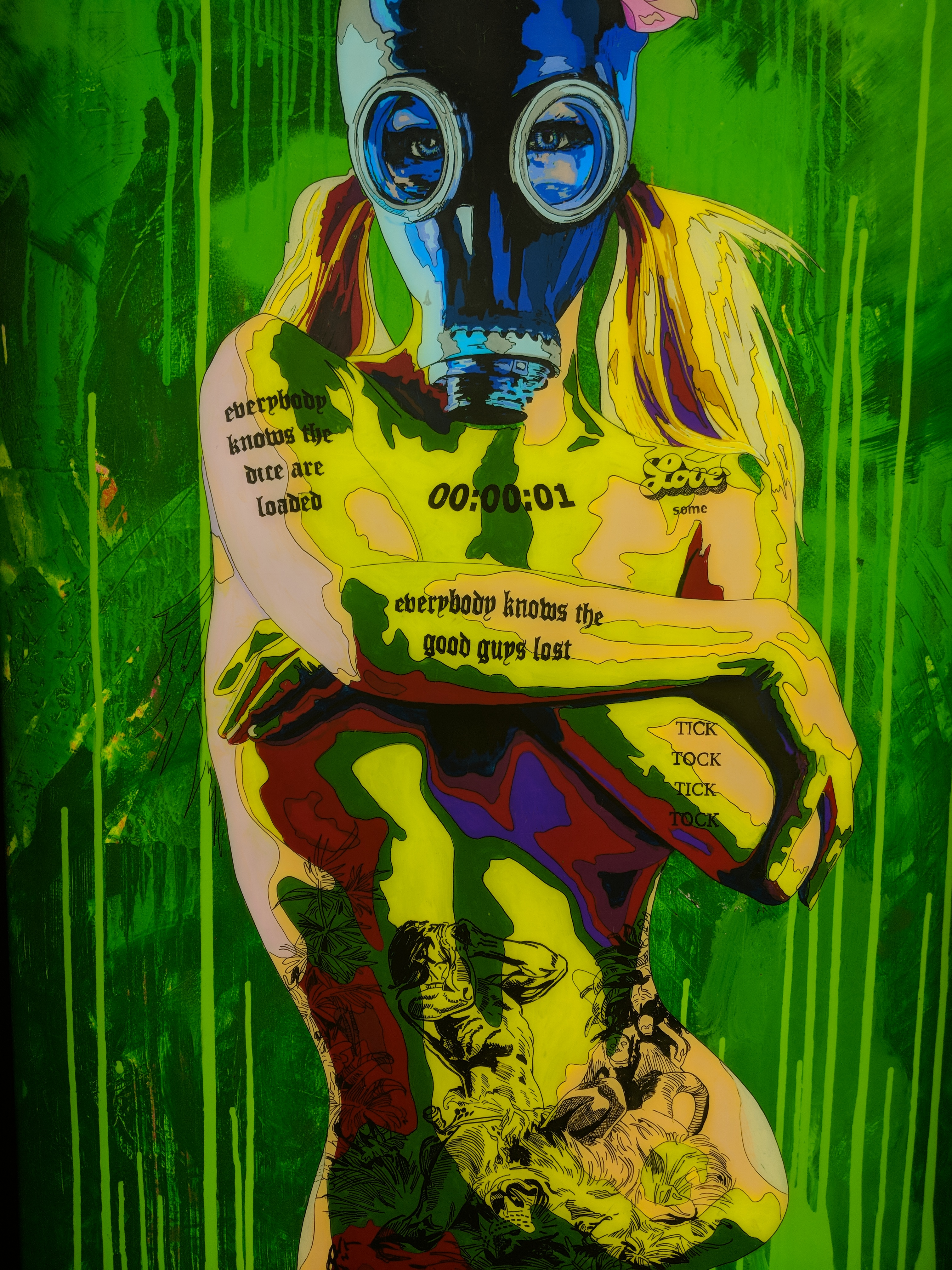 This one looks like fur from afar, but up close you notice that the surface is created with a billion toothpicks 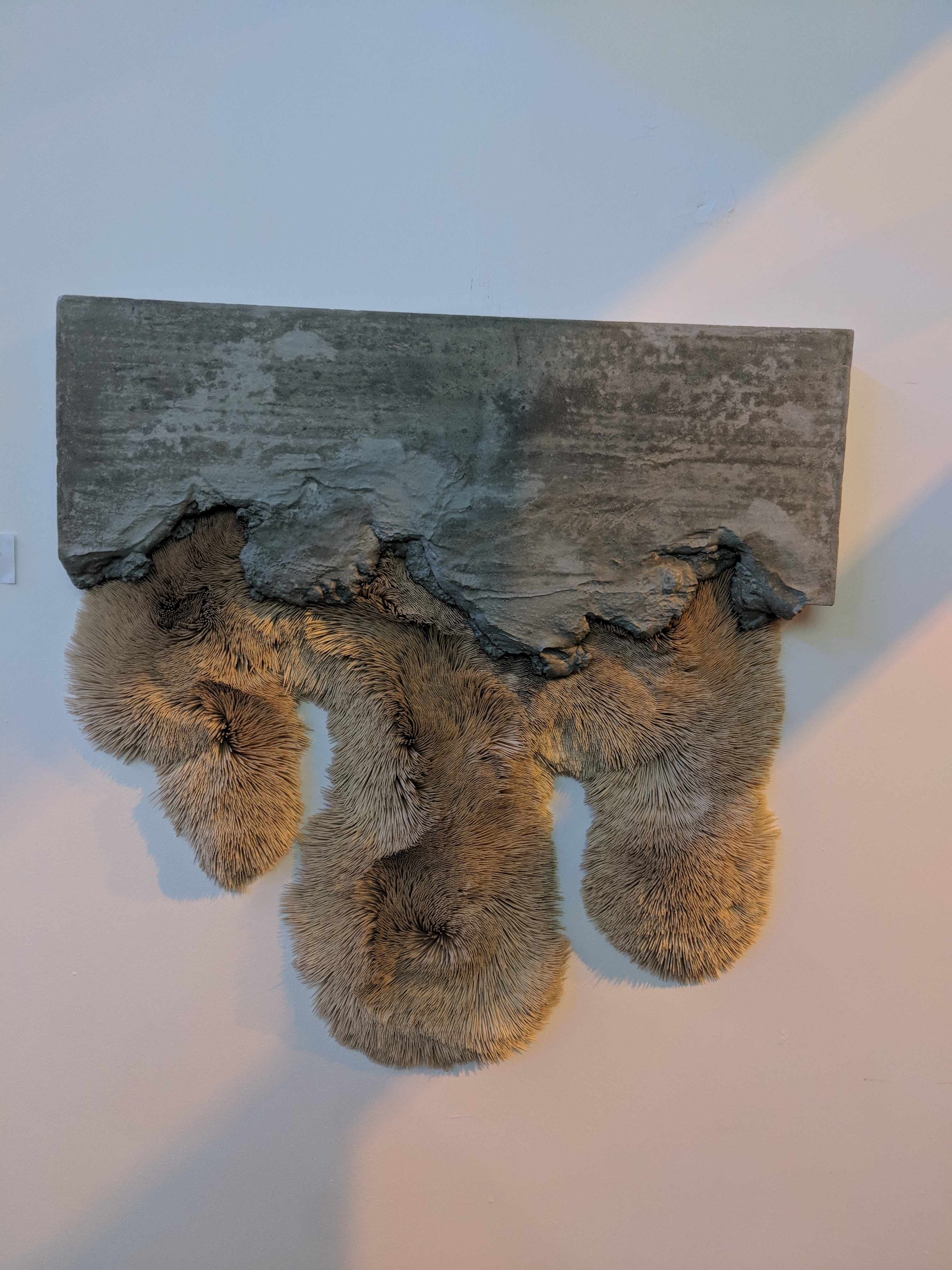 Dwaine jumps out in front of this one. These guys are funny characters 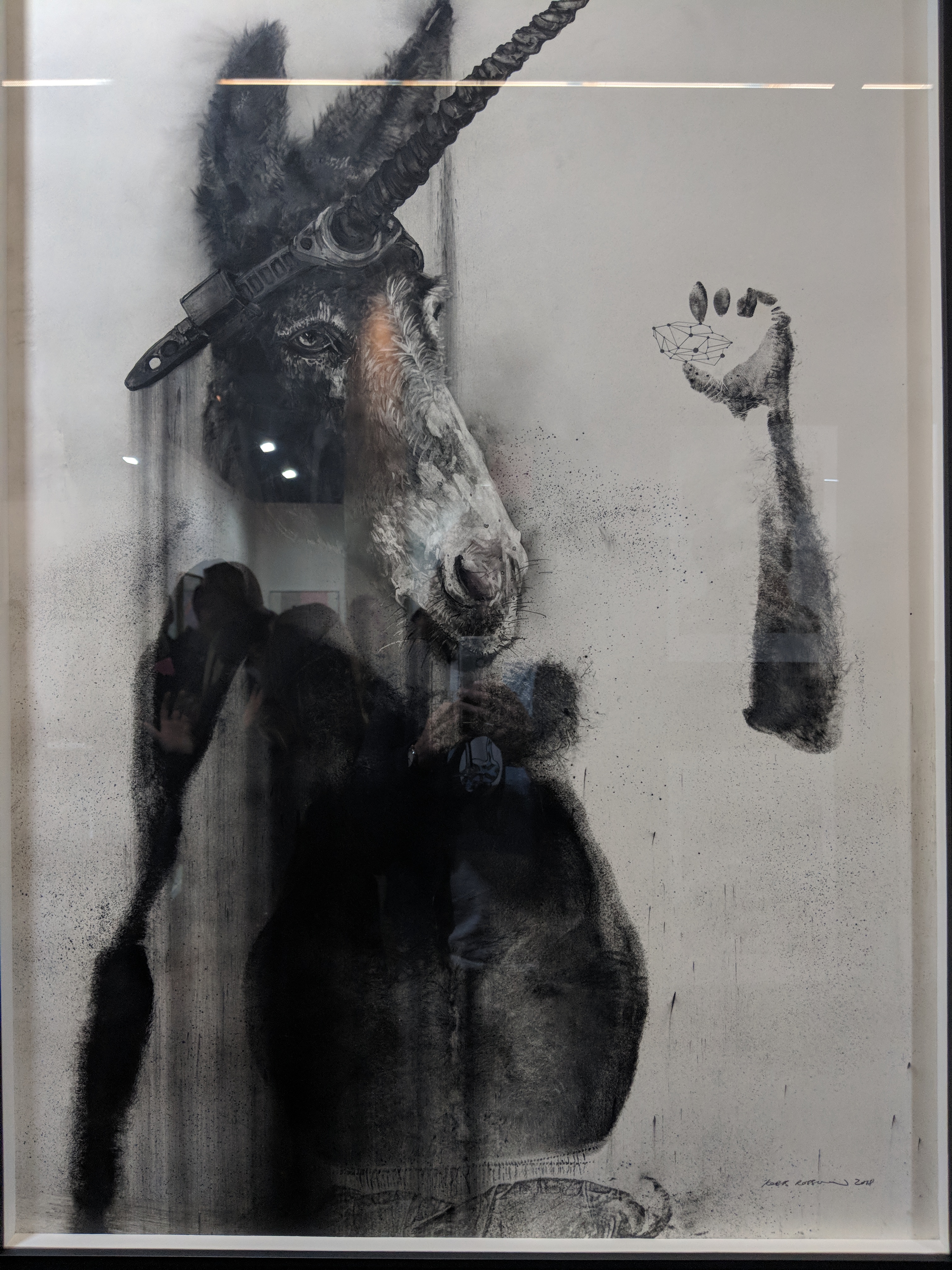 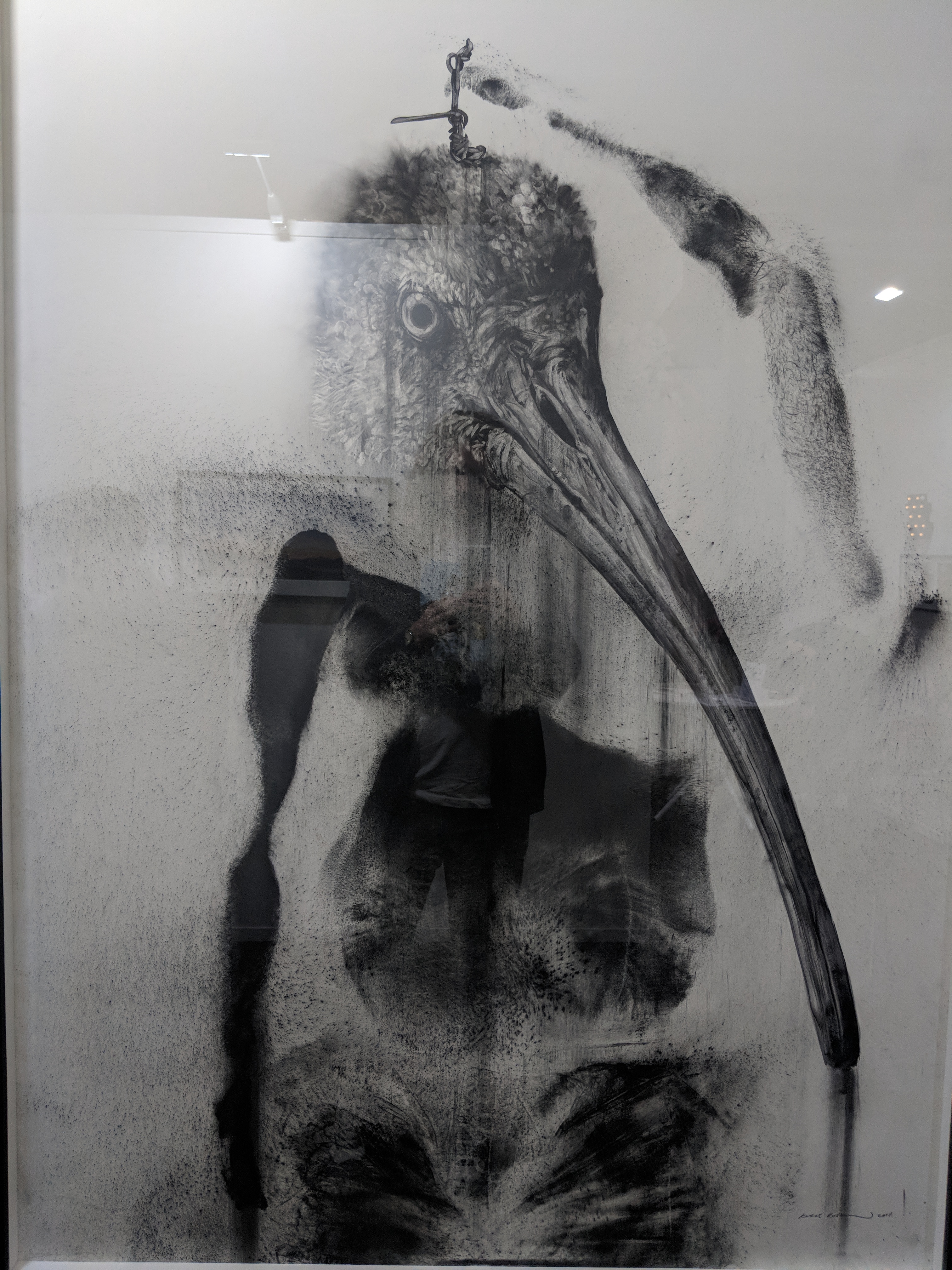 We go through a dimly lit bar area and there’s a whole other wing to this place. It’s huge.
Everybody is crowded around the tv watching this tennis match, what is going on? Oh, it’s Kevin Anderson, a South African, matched up against John Isner at Wimbledon. I can see the local crowd being into that. What? This is the longest semi-final match ever?! It’s the second longest match in Wimbledon history? Ok ok, this is kind of a big deal here. 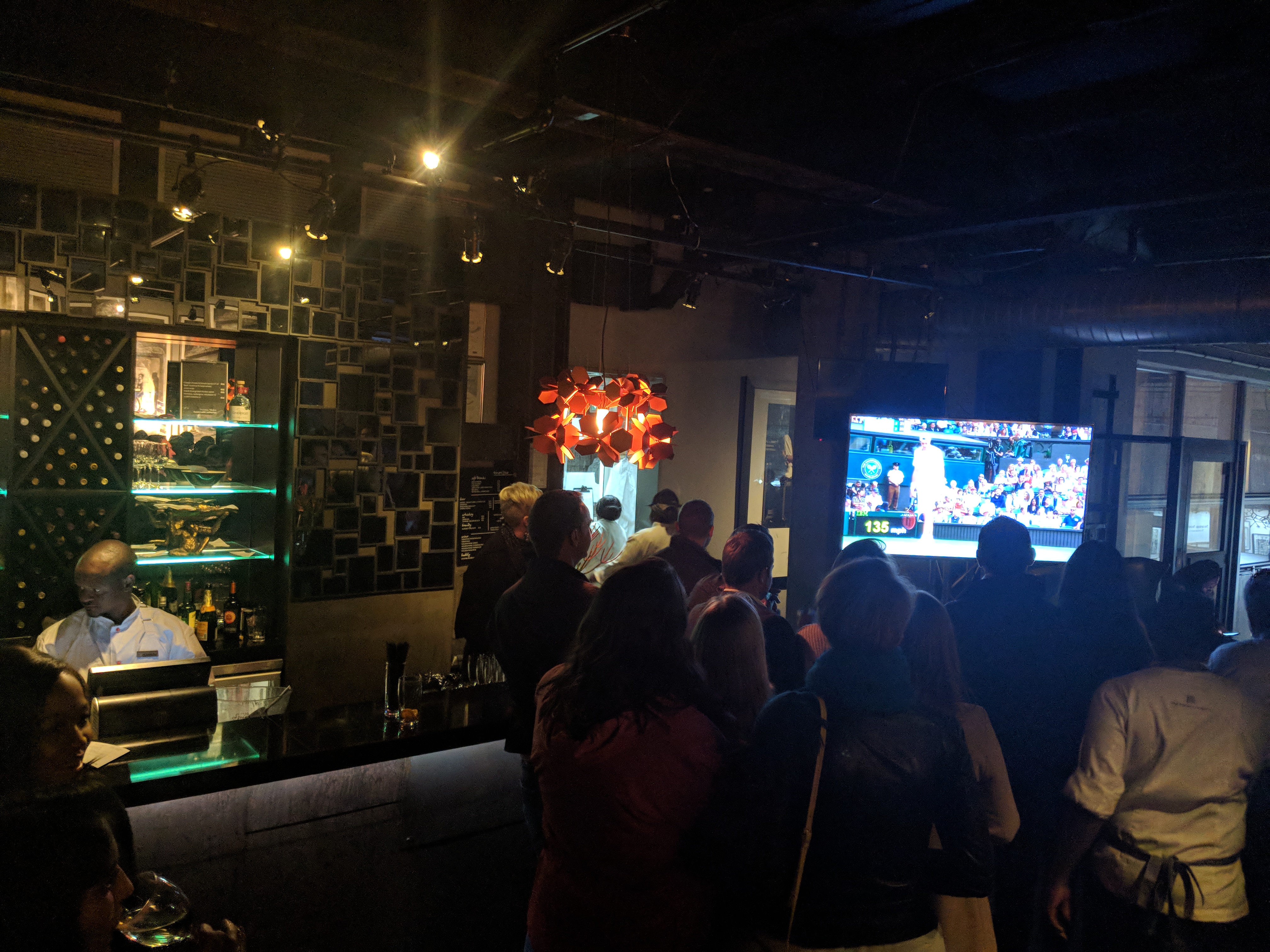 We go down another long hallway of art pieces. There are some rooms with hanging shit you can walk into. One is logs (cuz who doesn’t wanna walk into a room of hanging logs? What is that, birch? Fuck Yeah!). 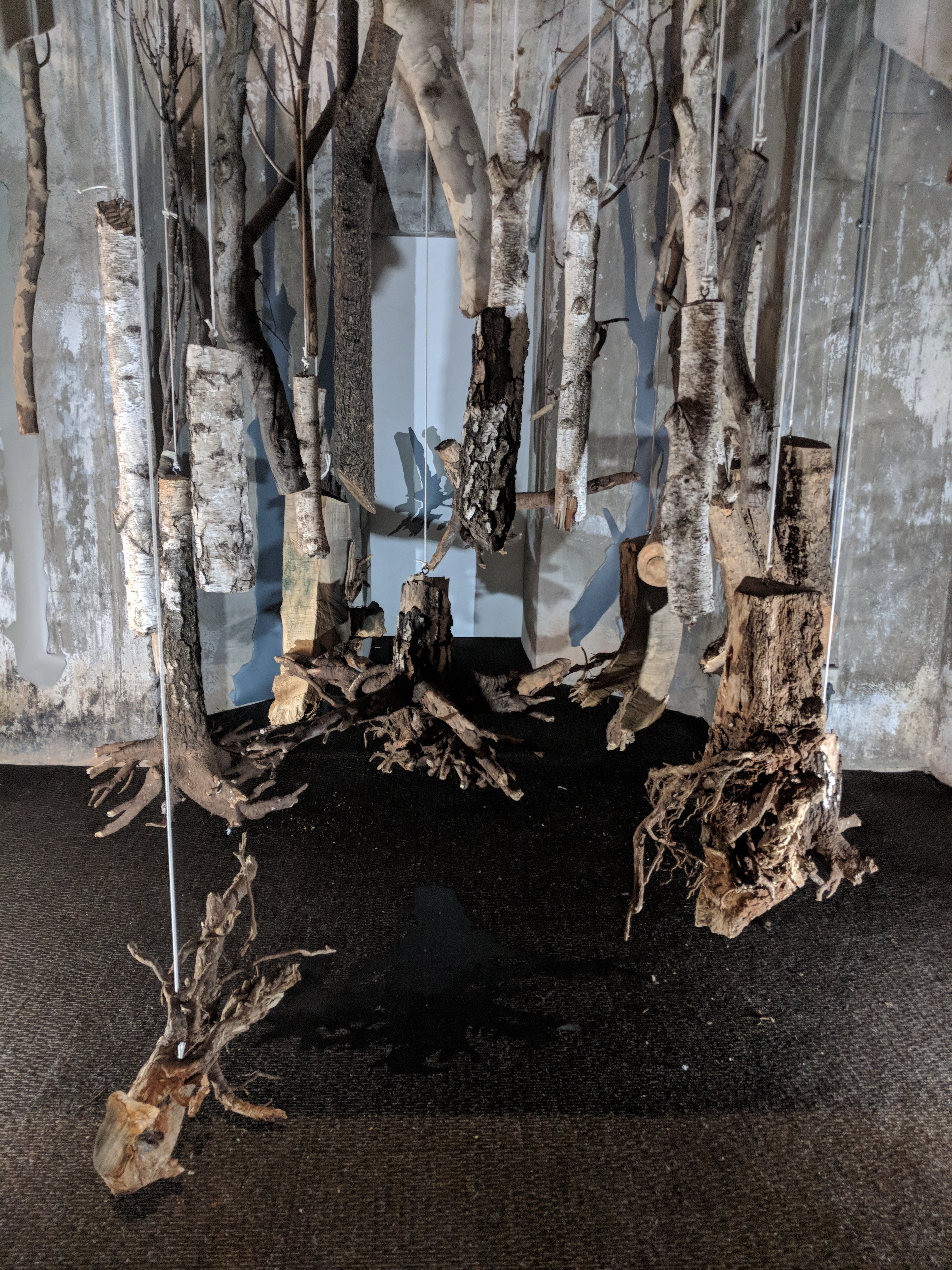 The other is filled with weird stuffed people-shapes that kind of reminds me of something that Yayoi Kusama might do.

Alright I think we’re getting a little art’d out. Time to find everyone and see what the game plan is for the rest of the evening.