We get down to the gate. It’s packed with a teenage girls soccer team in blue and white track suits. Pile on the plane and it turns out we have the exit row. No seat in front so all our stuff goes in the overhead.

The captain introduces the flight crew. He says they speak 17 different languages. It’s one of the most attractive flight crews I’ve ever seen, guys and girls.

An Egyptian guy and a Russian girl w a nametag Svertlana sit across from us for takeoff. These two could be underwear models. They talk about their favorite stopovers the whole time we’re taking off. Flirtatious vibe but they’ve both mentioned significant others. I overhear that there are some amazing eyelash extensions you can only get in Poland. We’re on the case…

I settle in and throw on the movie Lady Bird. It’s a bildungsroman-type flick following a girl from Sacramento through high school and into first year college. Focuses on her personality evolution and relationship with her family and friends, mostly her mom. Great movie. Good with in-flight scotch.

While I’m watching it I also get poured the worst coffee I think I’ve ever had worldwide. It tastes like burnt dirt. Like they left it on the burner 2 hours too long. Or had the beans roasted on Mercury. I put some scotch in but all that managed to do was ruin my mediocre scotch.

I pop the micro table that arches to my lap from the armrest and put my Surface on it. Hmmmm nope, I can barely type, no room to blog. Try to sleep instead. It’s the usual uncomfortable tossy turny shit-sleep. Even so, I probably accumulate a couple hours worth.

Since we have the exit row seats we don’t have a window. Which sucks because we’re probably going over those crazy man-made islands in Dubai shaped like a palm tree or the entire world right now.

Plane lands, we thank the underwear models and exit to DXB.

Dubai airport has nursing home smell. It also has a massive open interior. Unnecessarily big really, we end up walking 3x farther to get to the usual airport stuff. There are no announcements. It’s a silent airport. That part is nice.

The guy at immigration wearing white line robes checks me over a few times then looks me right in the eyes, smiles and says “Nice hair” and hands me back my passport. Thank-you

Verphff! Outside is a total sauna. It’s 40 degrees celsius at 8pm. More humid than I was expecting too. Gonna be a sticky time in the UAE.

Peter’s sister picks us up right on time. We come out of the doors to the center island and she’s swinging around the corner. Sitcom timing. Jump in an keep booking.

We drive away from the airport and everything is desert brown. Huge array of tall buildings, all shapes and sizes. There are cranes everywhere putting up new buildings. Just an insane amount of construction going on. This place will look totally different in a few years. “Something like 80 percent of the world’s cranes are here”, “Really? That’s bonkers” (Fact check: it’s actually more like 25%, but that’s still bonkers)

We drive passed the Burj Khalifa. Downtown Dubai has a crazy skyline.

We get to the apartment complex and exit the AC from the Rav4 back into the sauna that is Dubai. I get properly introduced to Peter’s sister, Michaela. She reminds me of her mother back in Normanton. Similar speech patterns and mannerisms. I also meet her husband, Kelvin. He’s a raspy voiced, all smiles Nigerian guy with knotty hair. These seem like good hosts for a 48 hour blitz of Dubai.

They have a nice apartment just 15 minutes from downtown. When we open the door, a cute, lanky orange cat comes burning around the corner, jumps on every piece of furniture in the room, and skidattles back out. “Oh that’s Aslan, like the lion. He’s crazy” 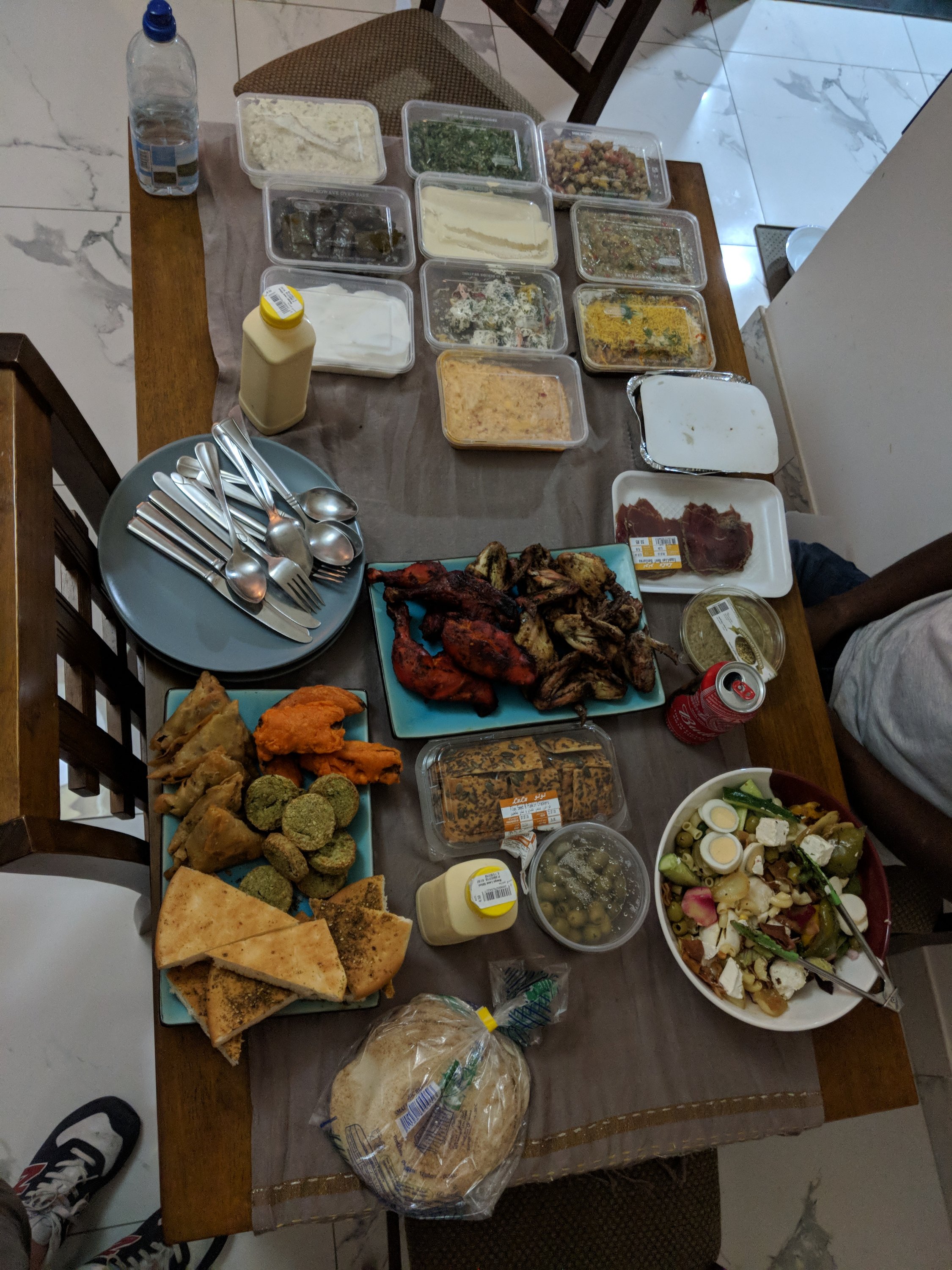 I taste all the colors and dey goooood! 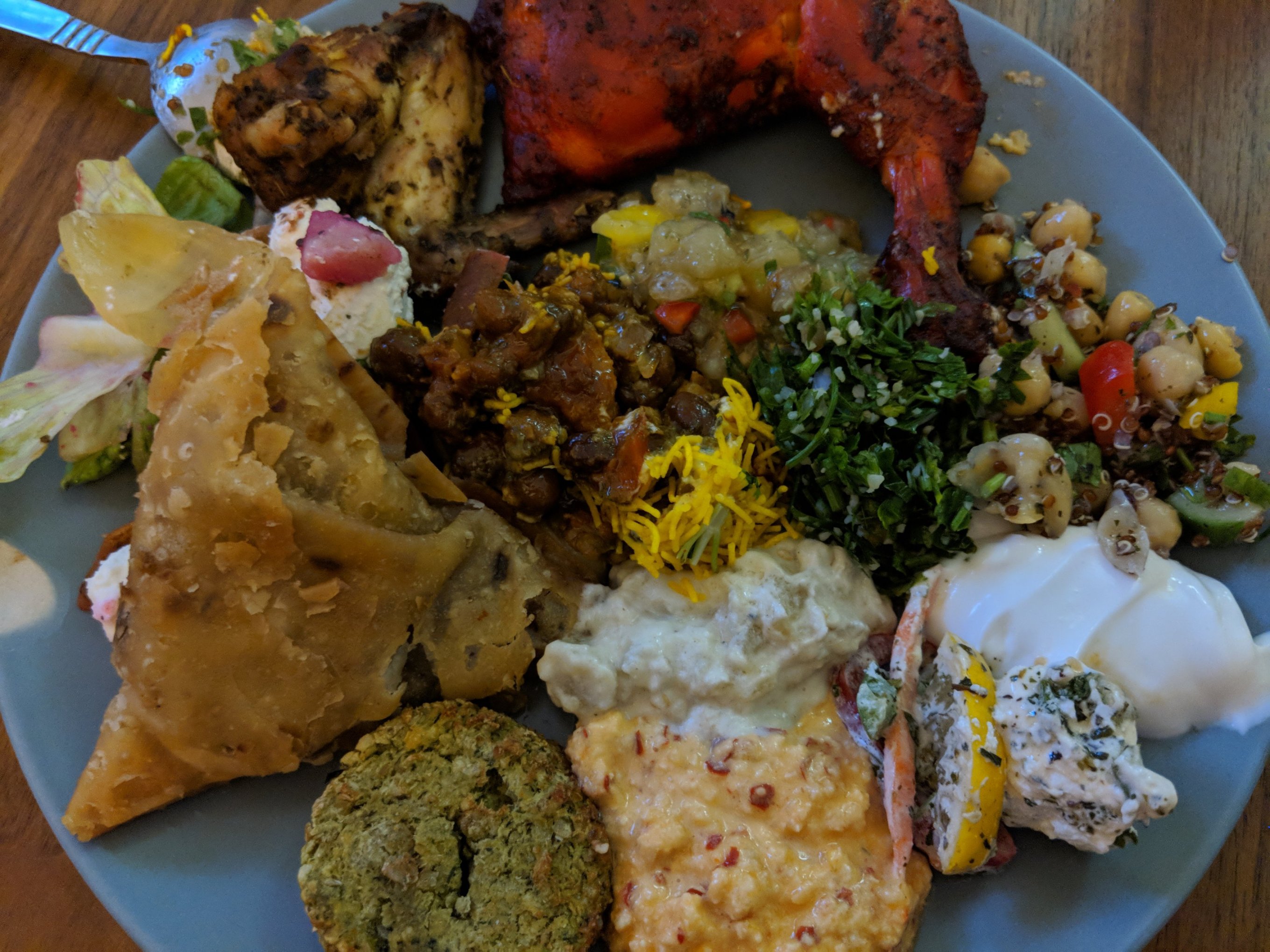 Kelvin prepares a sheesha to smoke and gives us a couple of beers. “I like your hair is it natural? Can I touch it?”, he comes over and rubs his hand through my hair. He’s pretty thorough haha. “Yeah you guys both have crazy hair. You’ll totally get along. Is it soft?”, Kelvin answers, “Yes. It is soft.” 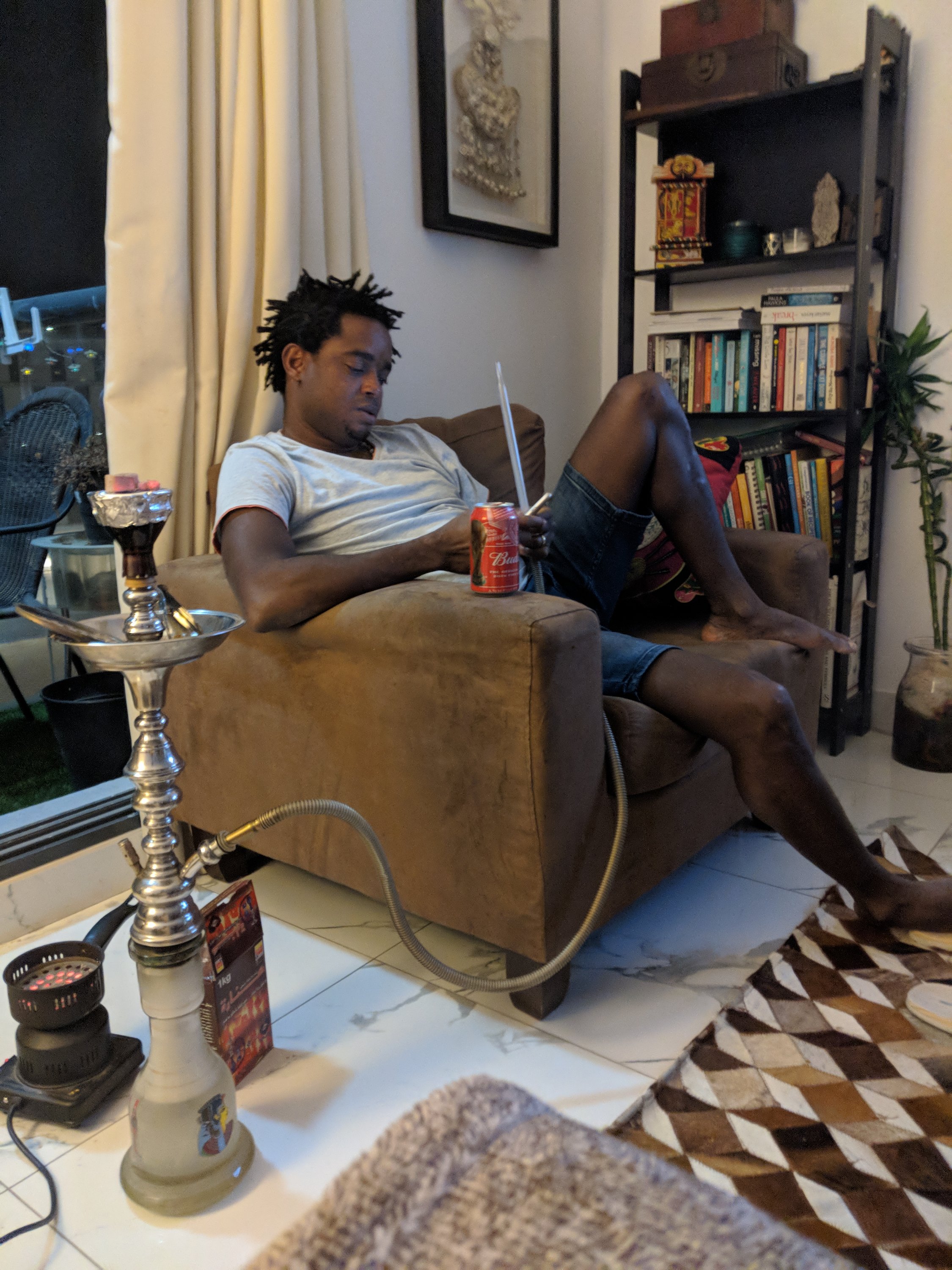 We veg in front of the tv and drink our beers while chatting with Michaela and Kelvin. Really tired, gonna sleep well tonight. Kelvin makes a surprisingly strong gin and tonic. Num! That should help too. By 1130 it’s about time. We’re exhausted from international travel partying. Big day tomorrow, I think we’re gonna take a dip in the Persian Gulf then hit the dunes in a Land Cruiser! Michaela says it’s called “Dune Bashing”.