It’s a short metro hop from the foxes of Fushimi Inari-taisha to the thousand armed statues of Sanjūsangen-dō. We enter the large temple, built in 1164 and also known as the Hall of the Lotus King, and immediately are asked to take off our shoes. We’re given a bag for them and led into the interior and around a corner. The signs and people working there seem pretty adamant about tourists not taking any pictures in here. I obey their wishes out of respect, but when I turn the corner and see a hall of a thousand statues it is reeeeeeally hard. This is pretty damned cool.

The room has a massive statue of the Thousand Armed Kannon in the center and is filled with 1001 life-sized Kannon replicas. In front of these are statues depicting the 28 Guardians of the Realms. They’re all super badass so yeah, not taking pics in here really sucks cuz I wanna nab em all. (A quick wizzle search reveals others don’t care about these rules or somehow got permission)

We take our time to read about all of the guardians and inspect the statues. It’s about as rad as it gets. 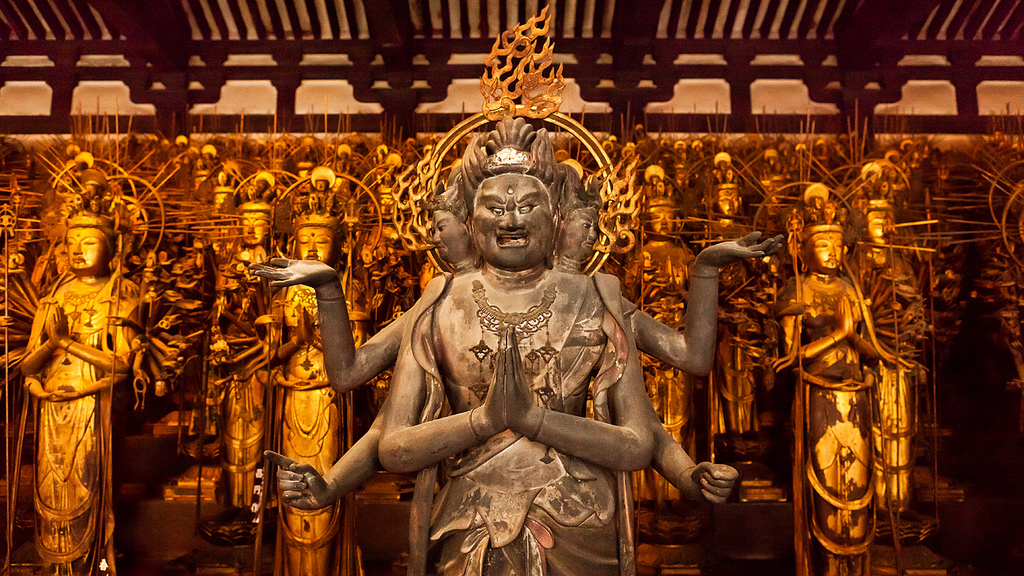 Afterwards we jam our shoes back on and return our bags. We head back out into the sunlight and take a stroll around the complex. Sanjūsangen-dō literally translates to “Hall with thirty three spaces between columns” which is exactly what it is. Signs outside describe annual archery tournaments being held here, shooting the length of the long hall to targets placed at either end.

It’s another pretty day in Kyoto. All those statues are in there.

There’s a nice zen garden nearby with sculpted trees and a koi pond as well as a natural spring, the Spring Crying in the Night, and a giant bell.

Hmmmmm, judging by these colors we may have just enough time to blitz it up to Kiyomizu-deru and hopefully the view will be good enough to catch a nice sunset over the city.