We cross the city North to Ueno Park and, of course, proceed to exit the metro in the complete opposite direction that we’re supposed to. This forces us to walk around the station, up a ramp, across the tracks and down the road a bit to the entrance. 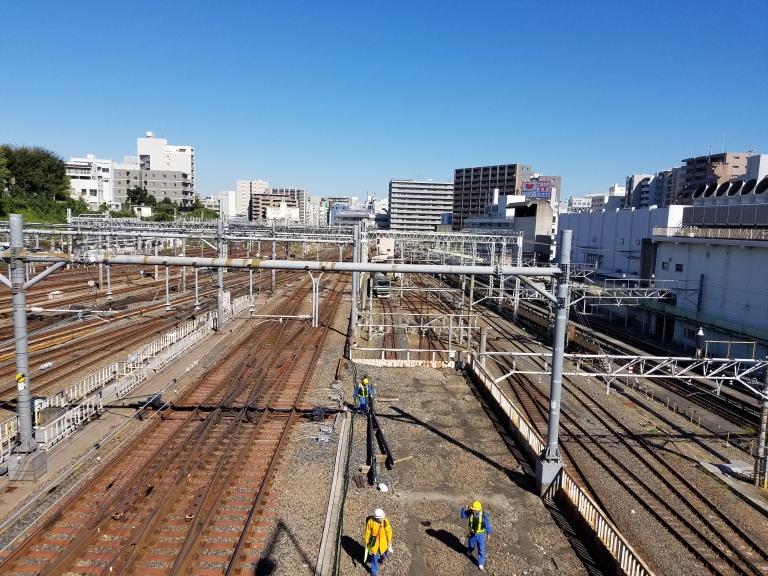 It’s a quiet Monday morning here and there doesn’t seem to be very many people about. Could make for a relaxing jaunt through one of Tokyo’s largest parks. Ahhhhh sheeeeet, just like the Imperial Palace, a bunch of the exhibits and museums are closed here on Monday. Ah well, it’s a big place I’m sure there’s a ton of stuff to do still.

We cross the main courtyard area and find ourselves strolling down a copper lantern lined corridor towards Toshogu Shrine. 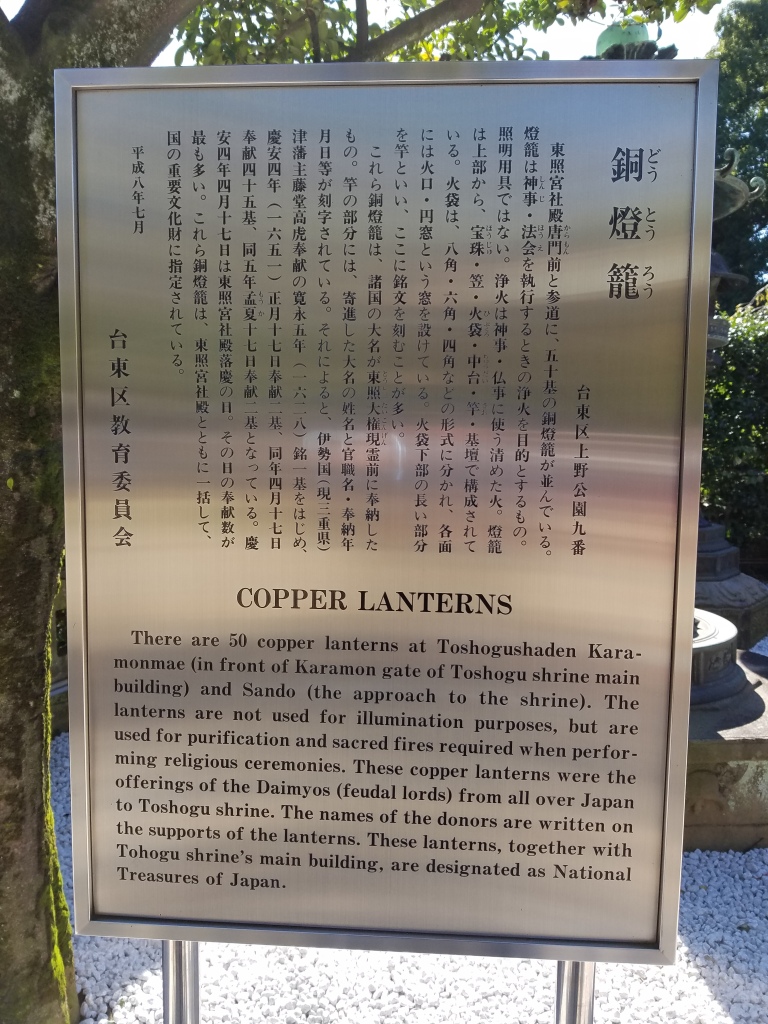 Outside this shrine there are wishing walls, like the ones we’d seen in Yoyogi Park. You can purchase a wooden card and write a small request on it to post to the universe in the hopes that it will come true. Queenie chuckles reading them and tells me that a lot of these are from students wishing to get an A on their exams.

We head out from Toshogu shrine and find a few neat little places for prayer, each with a wishing wall of their own where you can demand good grades from the heavens. 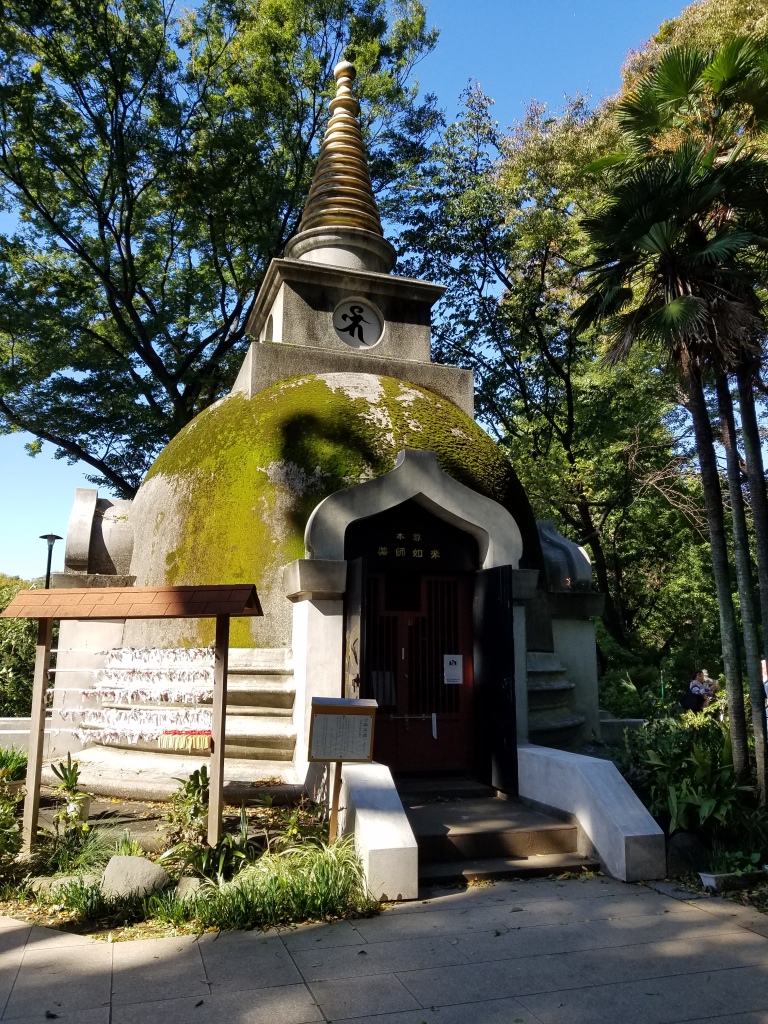 We spot a series of orange arches on a path down to more shrines and stop to take a look. A British girl asks if we’ll take her picture in the arches and she returns the favor with the shot below. A small line forms and we help out a couple of groups who want pics of their own.

I spot a small fox wearing a red bib and pedaling fortunes so I throw down on one to see what my luck may be. 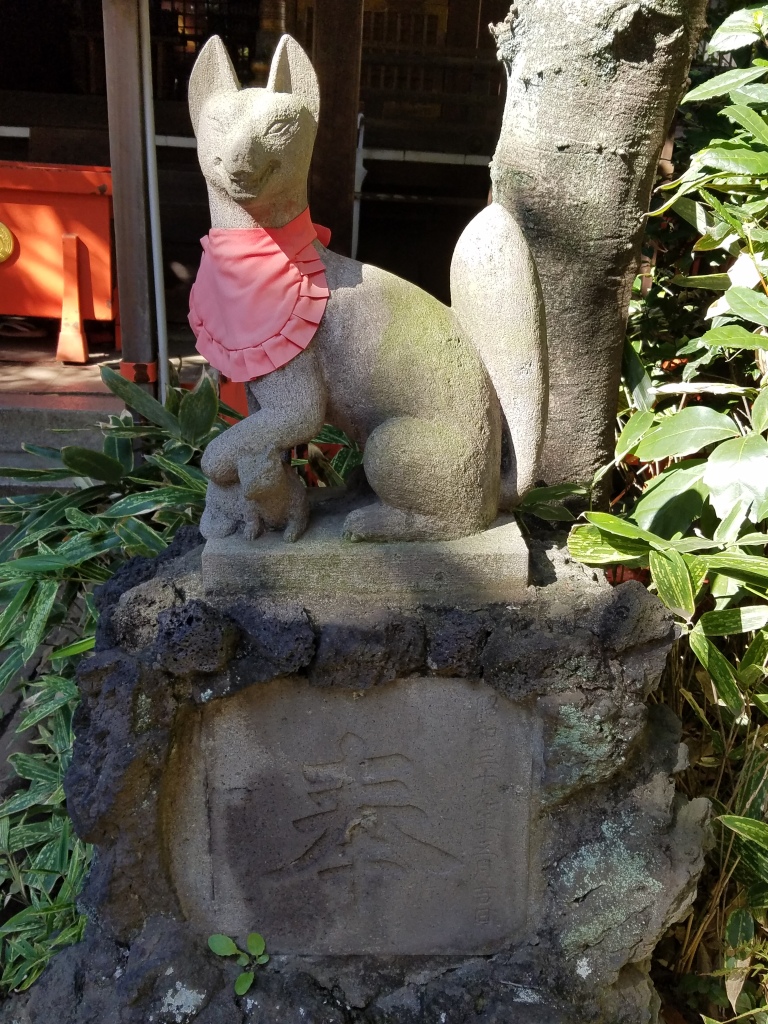 Oh this is decent Foxy, thanks.
A hidden dragon rising into the sky and fortune level: Excellent!!
Everything is promising? Hell yeah! 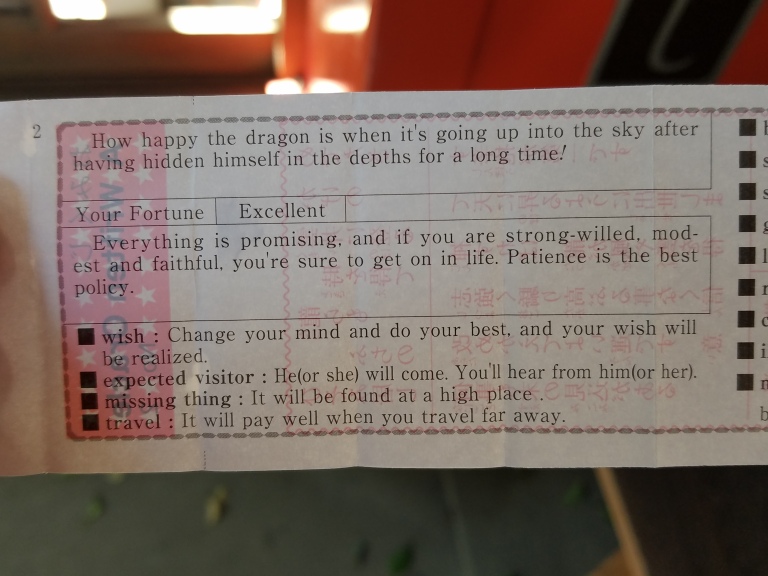 This seems good. I’ll find a missing thing in a high place?
Travel comment looks to be on point.
Let’s see the second half… 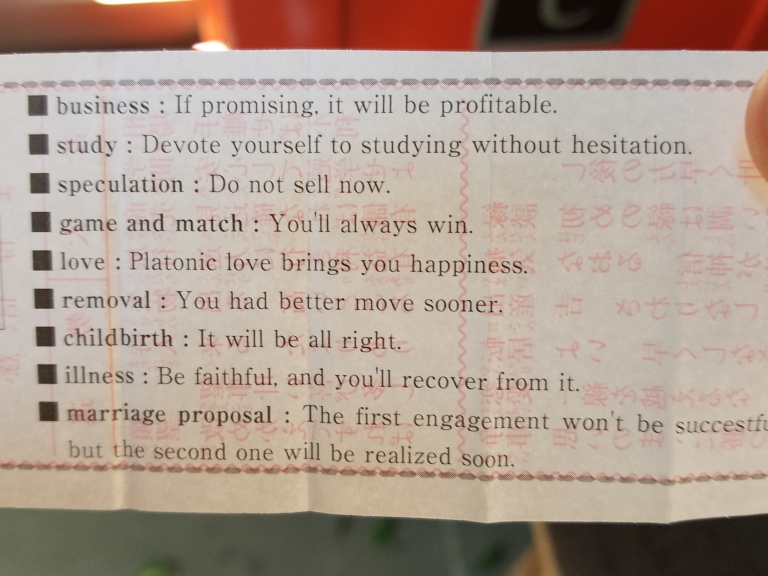 Queenie and I start laughing, I think there’s an unspoken understanding that some day we’ll be married. “Oh Bee, sorry! We can’t get married, it’s going to be terrible!”, “If we don’t get engaged will everything be ok?”…

On to the next temple/wishing wall 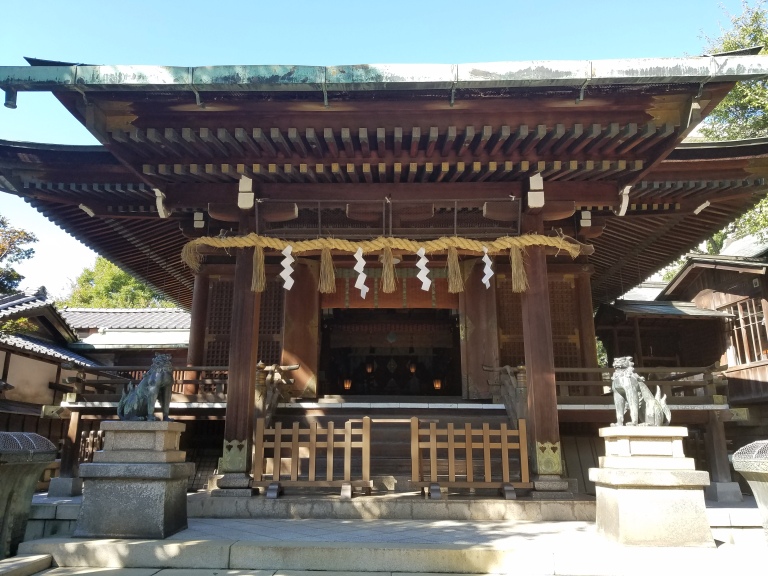 Ok seriously though, that excellent fortune with bogus marriage thing has to be rectified. We kneel to the lions and ask to receive another fortune. That’s how it works, you can just keep tossing money at the universe until you get what you want, right?

A brilliant cylinder of light cuts through the clouds and wind to illuminate the shrine in a magnanimous golden light. An effervescent neon lion appears for a brief moment then dissipates with a gust of wind. An oracle has appeared in Queenie’s outstretched hand.

Ok this actually seems pretty accurate. Glad we got that settled. A small dragonfly comes to rest on a nearby stick. Oh hey little buddy, it must be a good omen. Except that Queenie is terrified and runs away down the path. I dunno, the pattern-less wills of the Gods are impossible to decipher.

We follow a dirt path through some woods to a staircase that leads to a small pond off the side of the park. Another shrine and wall are there adorned with white lanterns.

There is a nice walkway here under some trees by the pond. Looking out across the lily pads on the city is peaceful and the autumn colors are a nice touch.

We find a dock leading down to the pond that is lined with swan boats. It’s on!

We vend up a couple of tickets and hand them to the Swan Guy. He says something that we don’t really understand. He tries again, “Work out. Very windy” and he works his legs in the pedal motion while making an exasperation face. “Ah yes. It is windy. But we’re super strong!”, <bicep pump / where’s the beach mime>. He laughs and walks us to the swans.

Aaaand we’re off. Holy shit, he wasn’t kidding! It’s windy AF out on the pond. Ok we may have more work than we bargained for here. It’s super hard to direct the boat where you want it. The wind basically nails the swan in the face and starts pushing against it and we have no choice but to allow it to dictate our direction or try vigorously to counter.

And this is why you never miss leg day.

Seems everyone else is in the same…. boat. The wind blows everyone away from the dock and then you have no choice but to go with it and dread the fight back when you’re ready to make that push.

Uh oh looks like there’s gonna be a head on collision out there.

With a little practice Queenie and I get our tandem pedaling and steering somewhat down despite the whipping winds. We manage to creep up on an unsuspecting duck and scare the shit out of him like some sorta stealth swans.

We do a lap against the wind and it’s actually quite nice. Uh nope we’re.. ok we’ll just go that way then. Right into the far corner, wind, that’s where you want us? Furthest from the dock? Ok sounds good.

We’ve got a half hour but I don’t think we need it, need to save some leg strength for trekking around the sites today. We put our tough faces on and pedal like mad into the wind, tacking our way back to the dock.

This face makes it seem like you’re going much faster than you are. We’re doing about 3 miles and hour, zigzagging all over the fucking pond (I like that you can see Queenie taking this pic in my sunglasses.) 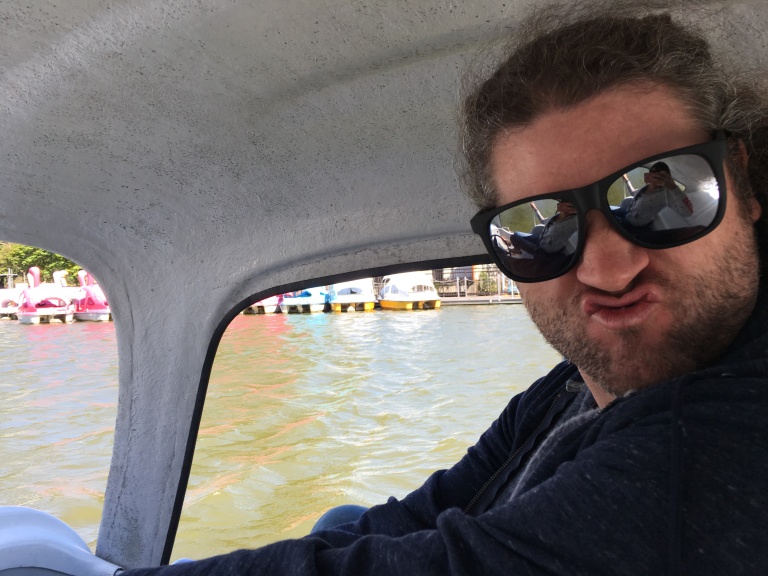 Swan Guy gives us the “Already?” face as we pedal up. Yeah bro, I missed a few leg days ok. He helps us exit the wind blown little swan with about as much grace as a three legged goat.

We take a nice little walk around the path by the pond. Such a beautiful, quiet place in here away from the megacity. This worked out nicely even though the museums and whatnot got Monday’d.

We exit out the side of the walking path back into the streets. Looks like we found a downtownish area of bars, restaurants and strip clubs? Guess we’ll just hit the Undies Performance Club! 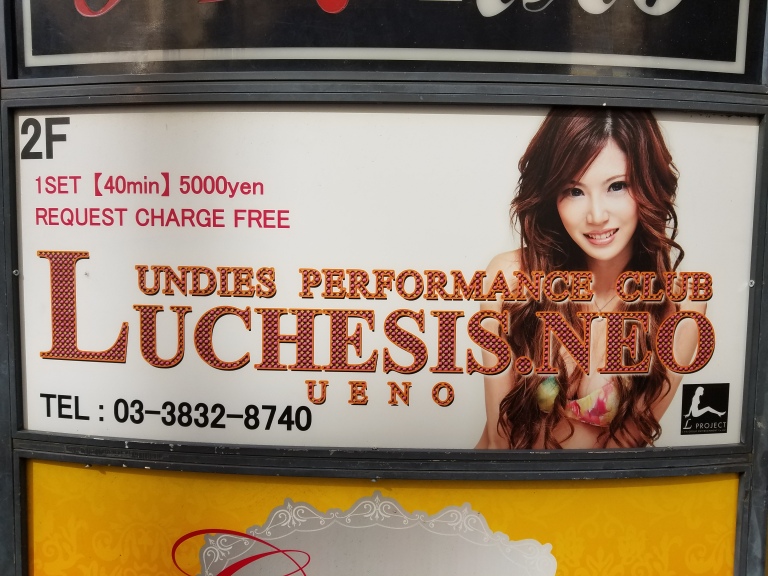 It’s a little early for this scene and everything is closed at the moment. But lunch and a beer does sound like a great idea. We roam the wind tossed side streets looking for a good grubbery. Actually, the little Korean place just outside the park entrance seems like the best place available at this hour.

It’s called Cafe Chung Hak Dong. We spot a window seat inside with our names on it. It’s overlooking the lily pads and out of the wind, this’ll do nicely. Cute menu.

They bring us some tea and a little heart with a towel or something in it. Hmmm ok? There’s an amazing show on a nearby tv that looks like some sort of Korean Idol with costumes. It’s incredible. Contestants compete against each other singing songs in costumes and masks. They’re really good too. The costumes are just ridiculous. There’s a lion, a fox, some samurai looking guy. You have no idea what they actually look like. The crowd votes on their favorite and then the loser has to take their mask off and you finally get to see what they look like. This might be a recap of last season or something. The drama is happening at a rapid pace.

When the waitress comes back she has a confused face. I look at the table, we don’t have much to work with here.

I dunno we just have tea, a tea pot and a little heart with a mini rolled up towel? She takes the pot and dumps hot water on the towel which steams and expands to 700 times the original size. Ahhhhh, the wipe your hands before food thing, thanks.

The menu has some great looking Korean soups and stews on it which seem perfect on a cold windy day like this. We get a cocktail and a beer and wait for it to arrive. Two servers come out with trays and plop them down in front of us. It’s spectacular. Mine is a spicy stew with various meats, vegetables and tofu. It’s super hot and decently spicy. Hits the spot. All the pickled sides and kimchi are great.

While we’re noshing soups the Korean Idol thing keeps ramping up. It’s super entertaining actually, this is a killer format for a show. This girl in a luche libre style cat mask is killing it. The next guy has a similar one. I guess the point is you have to judge by their voice and performance and not their looks? You can call in and vote.

Ok we’re hooked, this cat girl is incredible! Next up, a horned satyr dude. Nope, Cat Girl wins again. Flower girl? Nope, can’t take it. Up next… a giant Penguin outfit with a fish that he sings into. This is good. Kind of a ballad. Oh Cat Girl lands a heavy pop tune, sorry Penguin you’re out! He gives her his fish. This show rules! She’s back stage now with the penguin’s fish. We still have no idea what she looks like. “Should we stay? I wanna see what she looks like.” I do too but we can’t just stay inside watching South Korean youtube all day. We pay up and head out while Cat Girl launches into her next victory song.

We force the door open and step back out into the wind storm. I guess we caught the end of a super typhoon or something. Was all rain before and now it’s wind. We plot a course North to Senso-ji Temple, the oldest in Tokyo.

On the way we pass this little guy outside a shop. What a photogenic!!