We leave Fort Cornwallis and head back into town. There’s some tasty Indian cuisine wafting from a street corner and we go in to check it out. We get some mixed plates that are sensational.

Nearby is this fantastic Chinese temple

With a weird wall of cat dudes inside the temple grounds.

We find Armenian street and take a stroll down. It’s a great mix of cultures, Chinese, British and Eurasian. We find a place called Sun Yat sen house and take a look inside. Apparently Sun Yat Sen, the man instrumental in overthrowing the Qing dynasty and founder of the Republic of China, had spent time here in Penang. What we could tell from the plaques around the place was that he was trying to rally support and get donations for subsequent Chinese revolutions. 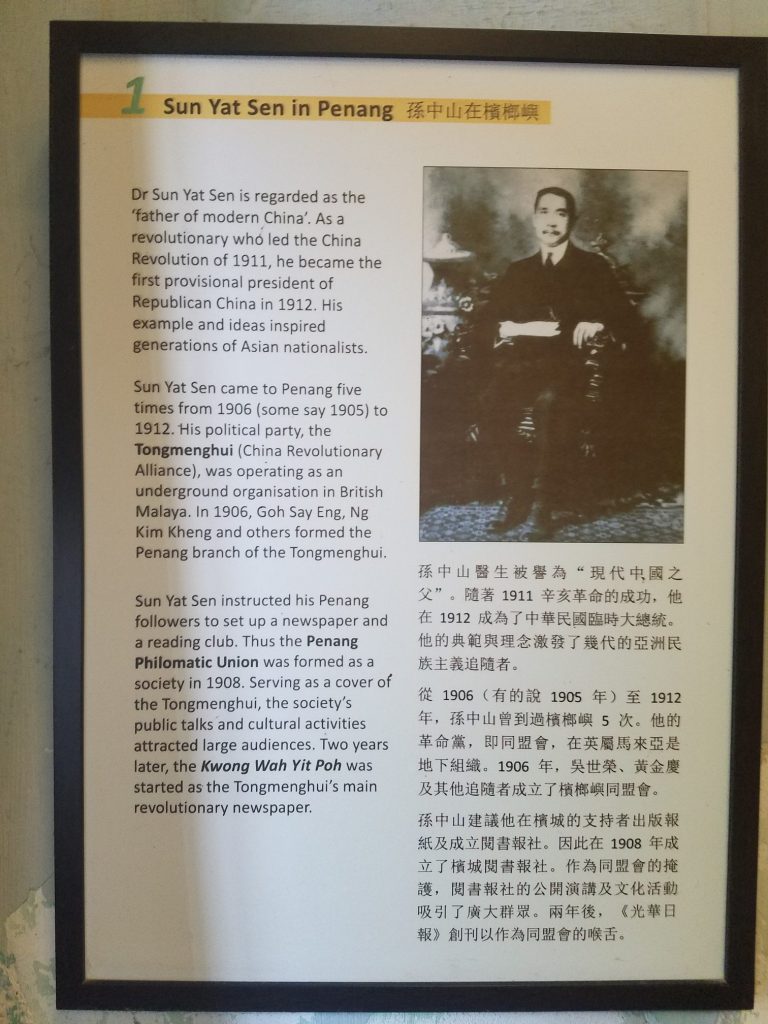 The place was well kept inside and was littered with paraphernalia of the era.

That was neat. Afterwards we strolled up and down Armenian street looking for the street art we kept hearing about. It was fairly easy to find as a number of small groups of tourists were doing the exact same thing. The street was super cool, lots of artsy fartsy shops, great looking restaurants, temples and mosques right beside old Colonial-style buildings, people out on the streets selling stuff, a band of gypsy-types playing music, etc… There were all sorts of historical plates and statues. Very cool area. 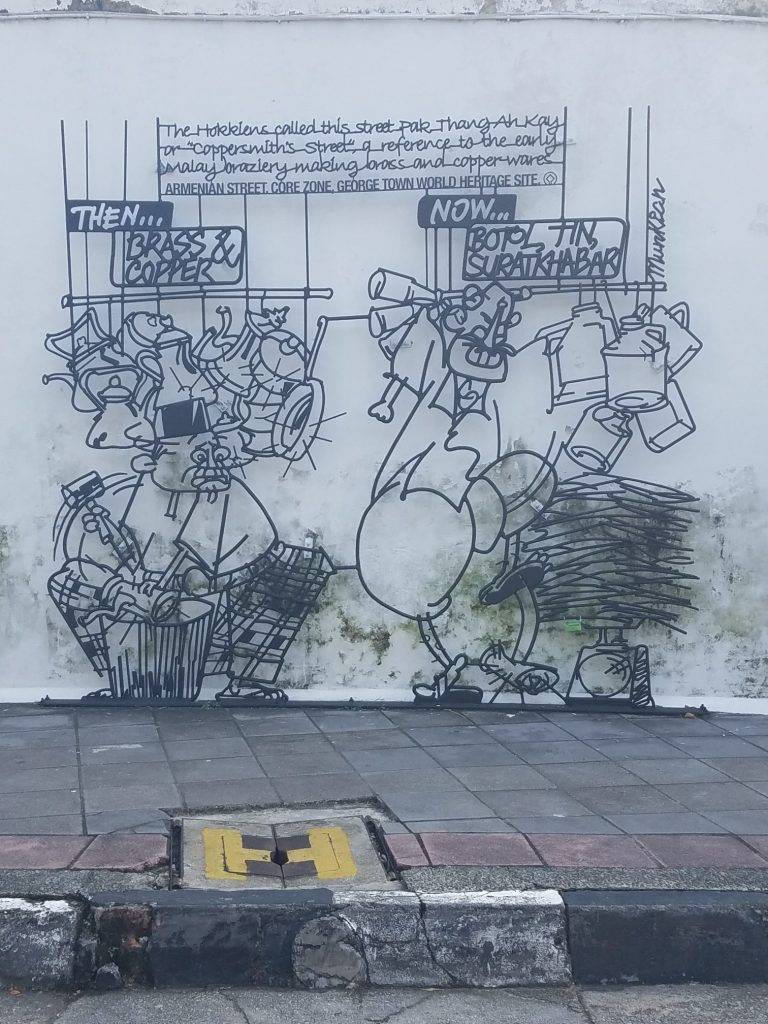 And the art was really great, a lot of the time it was trying to use objects already in place and paint a picture around it. Lots of kids and lots of cats. 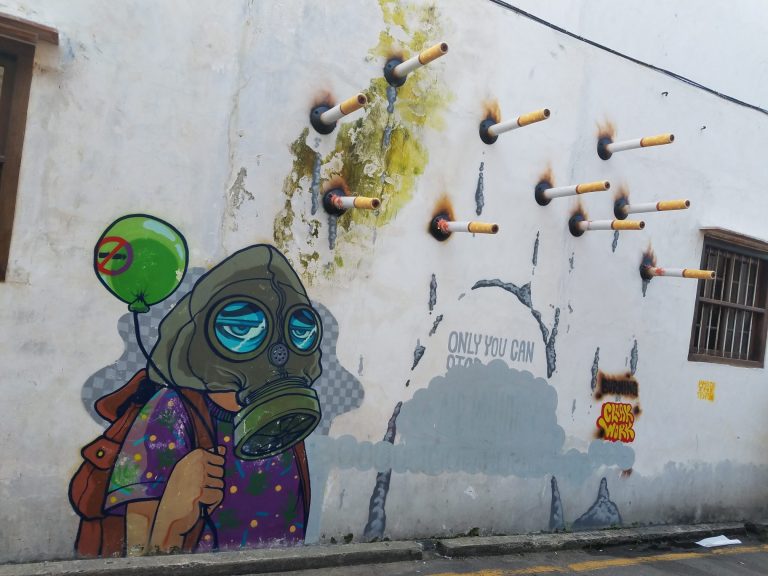 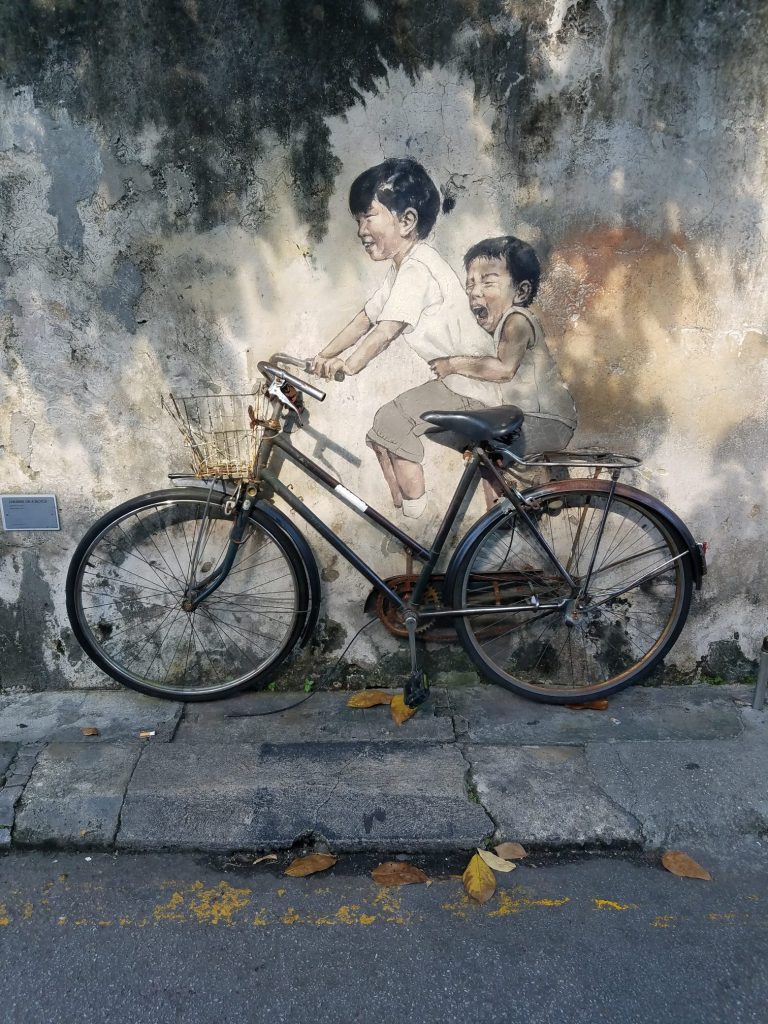 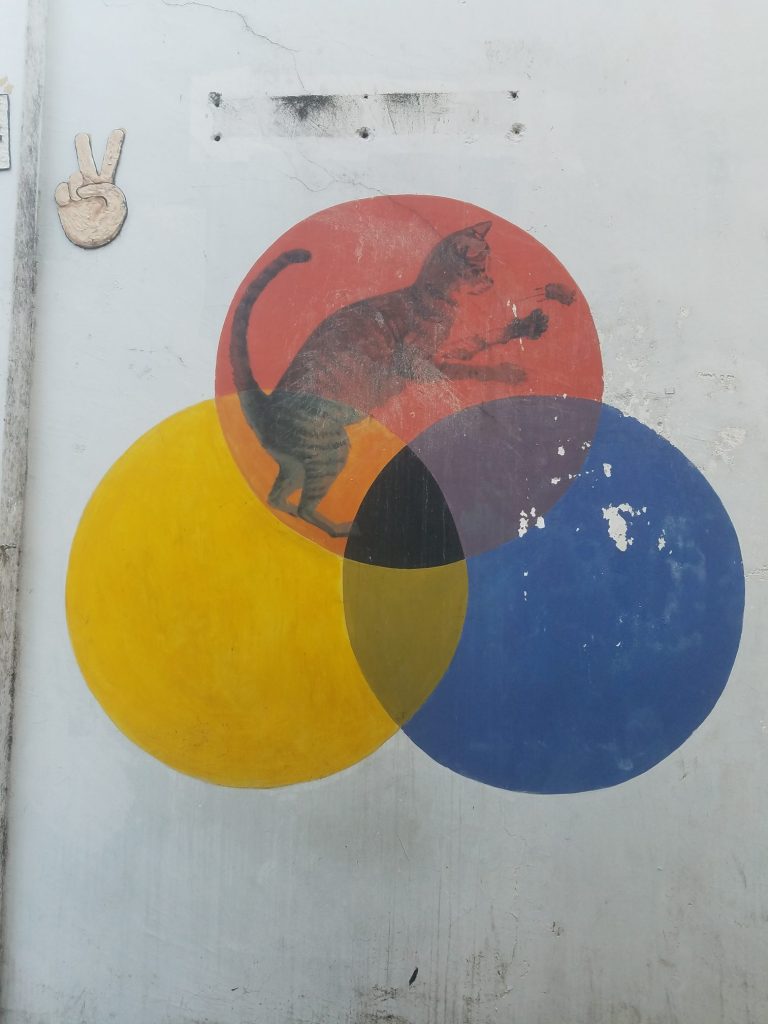 The sun was out and it was great to finish strolling around George Town. We did a lot of walking today, feel like we pretty much saw the whole place.

We recoup back at The Frame for a jiffy and decide there’s still time left in the day to get some blogging in with some beers. We grab our stuff and head back out again just looking for a cafe or bar with wifi. This turns out to be more challenging than expected and we walk around in the afternoon sun just working up man sweats.

We find a pizza shop with the ol’ wifi sticker on the door and figure it’s as good a place as any. Looks like they’re just opening and we’re the only people in here. Even better. We order up some beers. Ahhh nope. The delivery guy is sick today and so they weren’t delivered any beer haha. They offer to make a run for some and we tell them Tiger is fine.

We get some beer and blog time in and decide to check out the menu too. Damn, good looking za in here. “I know this is the food capital of Malaysia and everything, but whatever, pizza is the best.” And so it was. We got a lamb fusion and something called the matador. Both were spectacular wood fired, thin crust pizza.

Our servers were great, one from India and another from Thailand. They both spoke English fluently. The Indian dude said he went to a Methodist church while Thailand guy had a Welsh father that used to let him watch American tv. He calls his dad’s accent “musical”, but his isn’t, more American.

We tell them about our trip and they love hearing about it. Especially Myanmar. Thai Guy tells us they used to have balloons here but the conditions weren’t great. Too windy here on the coast. Nice fellas and eager to speak to us, maybe to practice their English, maybe because we’re the only ones in there.

We wrap things up and head back to The Frame. On the way we stop at a corner store and pick up some whiskey called Sir Winston. With a name as distinguished as that it has to be good. Comes in a box and everything. (Spoiler Alert: It’s fucking nasty).  We nab some 100 plus as well, the gatorade of Malaysia. It’s got what plants crave!

Back at The Frame we set up shop in the back little outside courtyard area and continue trying to catch up on some blogging. The owner dude who never sleeps soon finds us and hands us some coke and Dewar’s. He’s worried the one bottle won’t be enough for the evening. He joins us for some drinks. He also convinces 2 British girls in the foyer to join as well. Their names are Rosie and Rhy, “It’s pronounced ‘Ree’ like Rhianna.” They’re from outside London down closer to Brighton.

We get into the Sir Winston and soon are launching into travel stories, cracking up the Brits while the Owner comes and goes checking up on the front desk every once in a while. Something in one of our stories triggers a crazy memory from him. Apparently before owning The Frame he used to work on ships that carried cargo. He did this for 10 years, living on the water a lot of the time. He had a lot of run ins with Pirates, Horn of Africa shit you sometimes hear about.

He tells us about one time they were boarded by a bunch of young pirates. Just 20 somethings, all with AK47s. A few of them zip tied all the crew and huddled them in a room with guns drawn on them while the rest of the kids proceeded to offload 30 million dollars in merchandise from the ship.

Another time they saw the Pirates coming and all ran for the Captain’s Quarters and barricaded themselves in the room. They could hear gunshots and Pirates were trying to bust in the door. They thought they were going to die. Eventually they couldn’t hear anything. They waited longer until they thought the Pirates had left before exiting the room. Everything on the ship was taken, but they still had their lives.

He also tells us he knows a guy that replaced all of his teeth with ivory for 20K. The Owner grins and shows that he’s missing 4 teeth. “I forgot my toothbrush on one of the boats. Didn’t brush for 1 month.”

And he also tells us some stories about how hard life can be on the water during these long trips. How it drives people crazy, especially when they have loved ones elsewhere. That almost never works out when you’re gone so much. One story was just about a Captain who’s wife filed for divorce. When he found out the crew caught him doing laps around the top deck, naked and screaming.

Another guy, a 3rd officer, had his fiance leave him. He was talking about throwing himself off the back of the boat in a net so the propellers would chew him up. They locked him up in the brig. After a few days they let him out. Had to put him back in. Had to leave him in until landfall.

To lighten the mood up a bit I try to pivot the stories to how he got the hostel. I don’t quite understand what he says unfortunately, I’m still only picking up about 40%, he’s such a low talker. “But it must be an easier lifestyle than living on the water and getting held up at gun point by 20 year olds with machine guns”, “No man, it fucking sucks. Kids always trying to do drugs in here, bring hookers back, stealing stuff, wrecking stuff…” Haha, even with that kind of headache it still seems way better to me.

He asks me if I play an instrument, that I look like a musician, “It’s the hair, you know”, “I do.” He starts to tell me that he has written a bunch of lyrics and songs. They are all copyrighted (he seems adamant on copyrighting everything). He sent one to America and had a girl with a great voice sing over top of it. But she changed the words. And in the translation it doesn’t capture the essence of the Malay culture.

He brings out his phone and reads the words. It’s mainly a coming of age kind of story that ties in the spirit of nature and freedom of the land. I can see where he wants it to go. Well I can see about 40% of where I think he wants it to go. He starts singing the song to us now. The Brits trade “is this for fucking real?” glances. I encourage him and soon we’re exchanging emails. He’s going to send me the lyrics, he wants to collaborate.

We get back into telling stories and are laughing it up until the Sir Winston, Dewar’s, all of the coke and all the 100 pluses are pretty much toast. The girls call it a night, “Thanks for all the great stories. What is life but stories?”, “Precisely!”

MacKay and I finish things up, we’re getting pretty silly at this point. Probably the best time to make a plan. We decide to nab a short flight to Langkawi in the morning and book a guest house called Zackry’s that looks pretty pimping. Now all we have to do is not miss our flight. Shouldn’t be a problem. Ahhhh Boxer Time and Eye drops!