We wake up with only 20 mins to check out of Mingle. On the roof in the wee hours last night a couple of drunky monkeys named McBurger and Diesel decided we’d boogie down to Malacca today and see what the UNESCO heritage Colonial port town is all about. So now we’re rushing to the showers and packing up to get out of our rooms in time while also being hungover as fuck.

After the initial scramble we reconvene downstairs at the cafe underneath Mingle in an effort to come back to life and figure out what’s next. Drop our bags in a corner and we order up all of the coffee in Kuala Lumpur. We are some seriously hurting units, hungover (why did we let MacKay be in charge of drinks?!), and now I think all three of us are sick simultaneously. We grab some grub from the cafe and it is fantastic bistro sandwich and salad fare. I feel 7% better.

Skinny as a Rail at Mingle’s front desk told us on our way out that the best option for a bus to Malacca was probably the TBS. The Terminal Bersepadu Selatan is the main bus terminal in KL and from a quick glance at the site there are a number of buses going to Malacca all day on the cheap.

We throw our backpacks into a taxi and exit KL southwards towards TBS. There ends up being a ton of traffic on the way and the taxi ride takes over an hour, which is weird because I thought Malacca was only about 2 hours away. Might as well have had the taxi driver takes us right to Malacca.

The TBS is a massive complex, on the outside it looks fairly modern. When we enter though it seems to just be a collection of bus companies each with their own ticketing booth and a massive line of people in front of each one. MacKay gives me the look, “You’ve gotta be fucking kidding me.”

We scan for companies going to Malacca and find that the largest line is also for the company with the closest departure time. Well shit. Drisdelle and I need to find an ATM so we stick MacKay in the line and go to scout out the rest of TBS. “We should just take a fucking taxi man, this is bullshit”, “We’ll figure it out.”

We take an escalator up to the second floor and look around. Hmmmm nope don’t see an ATM. But… we do spot an eTicket kiosk with only a few people at it. What? Is this really the only self serve ticketing option in the whole place? Hidden up here on the second floor by a deli? “Should I go back and get MacKay?”, “Nah, keep him in line in case our cards don’t work or some shit. I can grab his ticket if this thing works out.”

As the clock ticks down to the next bus we are still waiting in line behind just a few people. This is just painfully slow, no idea why. Finally we get up to the kiosk. Pick a bus line, a departure time, sweeeeet a bus leaves in 15 minutes aaaaaaand the card works. Hell yeah, we’ve done it!

We go back to collect MacKay and he is visibly fuming. He’s been shuffling slowly forward in the line, surrounded by impatient people in the noise of the busy terminal and his inner rage has been mounting the whole time. As noted in several posts, noisy, inefficient crowds of people are McBurger’s kryptonite and this station was pushing him to the boiling point. So we sit back and observe for a moment to gauge whether we’ll be punched in the face upon approach. Lack of sleep, being sick and general hungoverness will always increase the odds. Looks about 50/50 so we just go for it, tickets in hand above our heads as a peace signal.

“Fuck this fucking place man, I’m going to fucking lose it!”, “Yeah, could tell. We got tickets from a machine upstairs”, “What the fuck?! Why aren’t they all self serve?”, “Dunno, but we’re good to go. Fifteen minutes”, the Hulk force-grabs his bags “Fucking stupid fuck of a fuck fucking fuck-fuck”, “Yeah, I know. Let’s go.”

The bus is decent and we each grab a seat and immediately move to hangover nap positions. As a result I miss most of the ride’s scenery. I do get to witness a guy totally pick up a chick from the seat behind her throughout the ride though, which is kind of fun to witness. They went from awkward first contact to shy smiles and bashful laughter to sitting together to leaving the bus arm in arm. I didn’t understand what they were saying of course but the body language of the game is universal.

We exit the terminal and nab a taxi to the guest house I’d reserved from the Koala’s pouch late last night. Doesn’t take too long to get there, the town seems relatively small. We pass by a bunch of official ‘Don’t mess with Melaka’ signs lining the road which was kind of funny. Is Texas their sister state?

Our moody taxi driver drops us off and tells us we need to walk from here. I guess it’s all one way streets and this is actually faster. Once again we find ourselves in the Chinatown section of a city. Lots of Chinese temples and dragons and lanterns. Chinatown is becoming our comfort zone. Our first impression is a great one. Very chill vibe and great old school architecture and feel. Part Colonial (Portuguese and English), part Chinese, definitely going to be a fun place to explore.

We walk up to Layang Layang guest house and it’s really really nice. There are bikes outside which I presume we can rent out, and a large open seating area inside some big wide open doors to make it feel like you’re outside. Good assortment of random decor, I like it already. 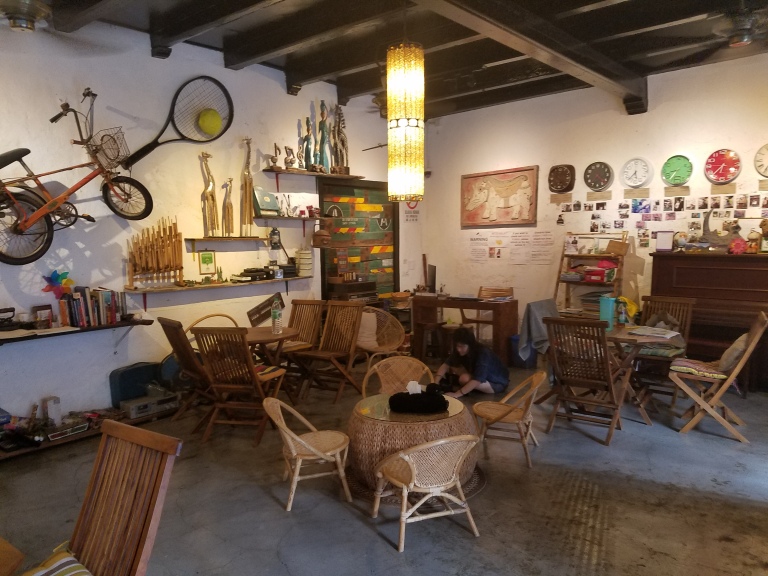 When we walk up to the girl at the front and say hi she looks up and asks, “Jonathan?”, “Yep”, “6 people”, “Nope, just 3 really baller people”, she giggles. There was less than  a $10 difference in getting 2 rooms for the 3 of us or just getting one room each. Naturally we went baller. More accurately, we each wanted to be sick and recover in our own rooms.

While we’re checking in a small black puppy is relentlessly attacking my pant legs and shoes. He’s adorable, “What’s his name”, “His name is Poppy”, “Popeye? that’s awesome!”, “No Poppy”, “Ohhhh Poppy the puppy, you’re a lil’ bruiser aren’t ya?” I rile him up into a mini barking frenzy while he tries to bite my hands. he’s pretty damned cute. 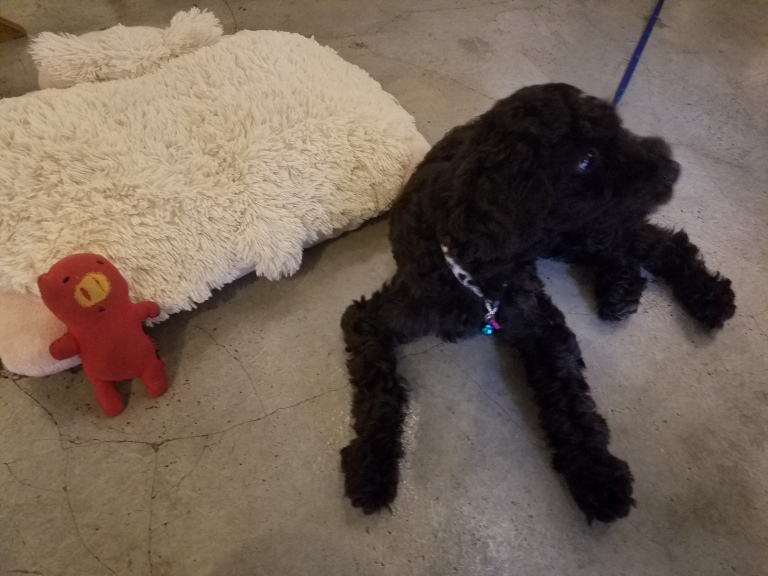 We get shown around Lyang Lyang and it is a dope spot. There is a large atrium with a beautiful tree growing through the middle up into an open air skylight with all the rooms around the outside. First impression is that this is easily one of the nicest hostels we’ve been in on this trip so far. This is confirmed when we see the rooms, each with their own temp gauge, sitting area w table and big comfy beds. 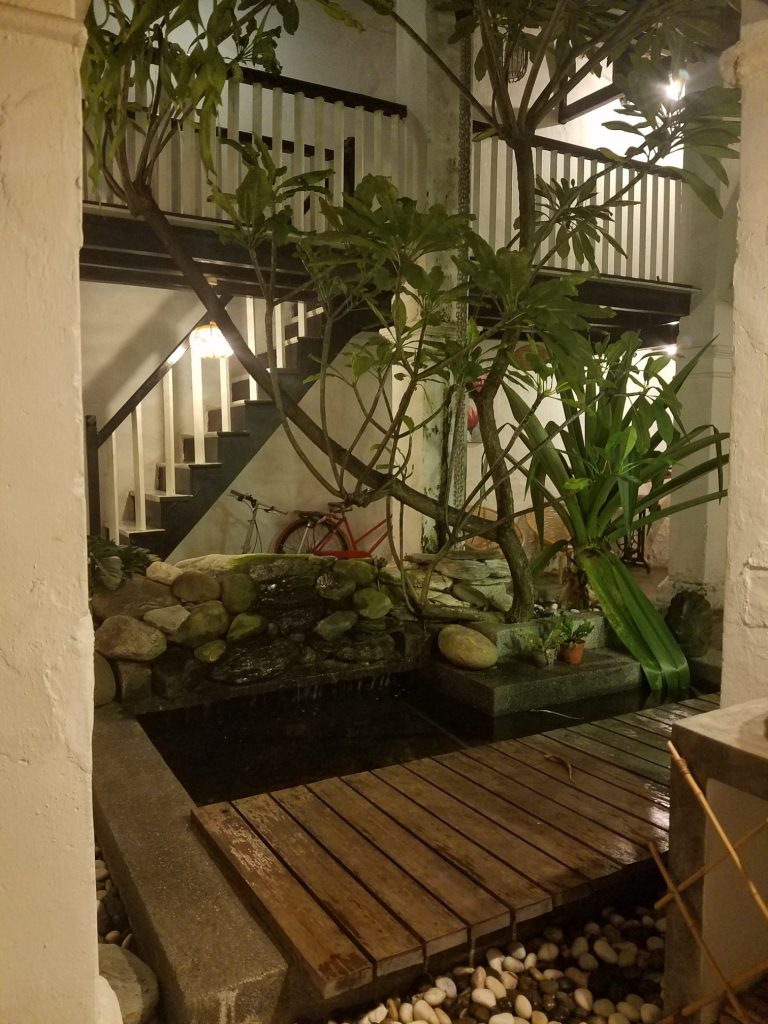 View from my room out into the street..

We get settled into our respective rooms and convene for a Malacca scrum session. MacKay is feeling rather rough and definitely seems to be slipping into the sickness that has plagued Drisdelle and me. He just wants to crash out for a bit. Drisdelle and I decide to use the remaining sunlight to see what our surroundings look like.