Back on Khaosan Road we end up at a place called The Hub that has a chill outdoor garden seating area. We order up another 5L tower of Chang. When it arrives the Australian guy at the table next to me exclaims, “My drink order seems largely inadequate now, mate.” We order up some food and are pretty content just chilling in the breeze of The Hub’s fans and unwinding for 5 litres. 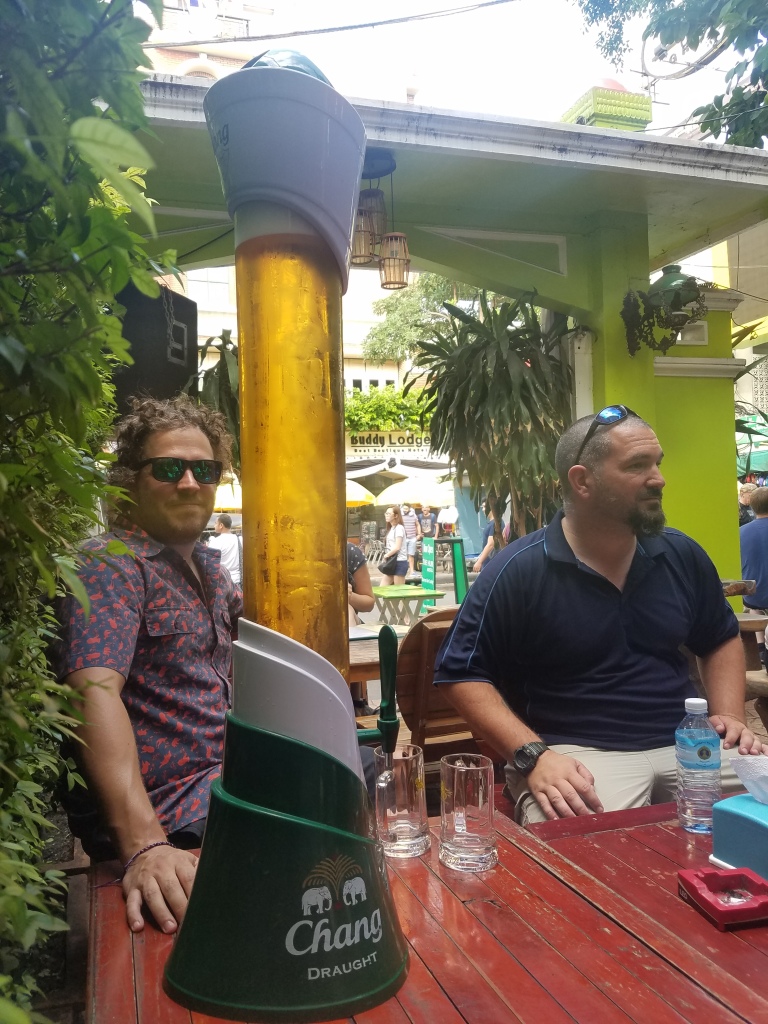 A scorpion vendor swings through The Hub so we re-up on the crunchy winds of change. 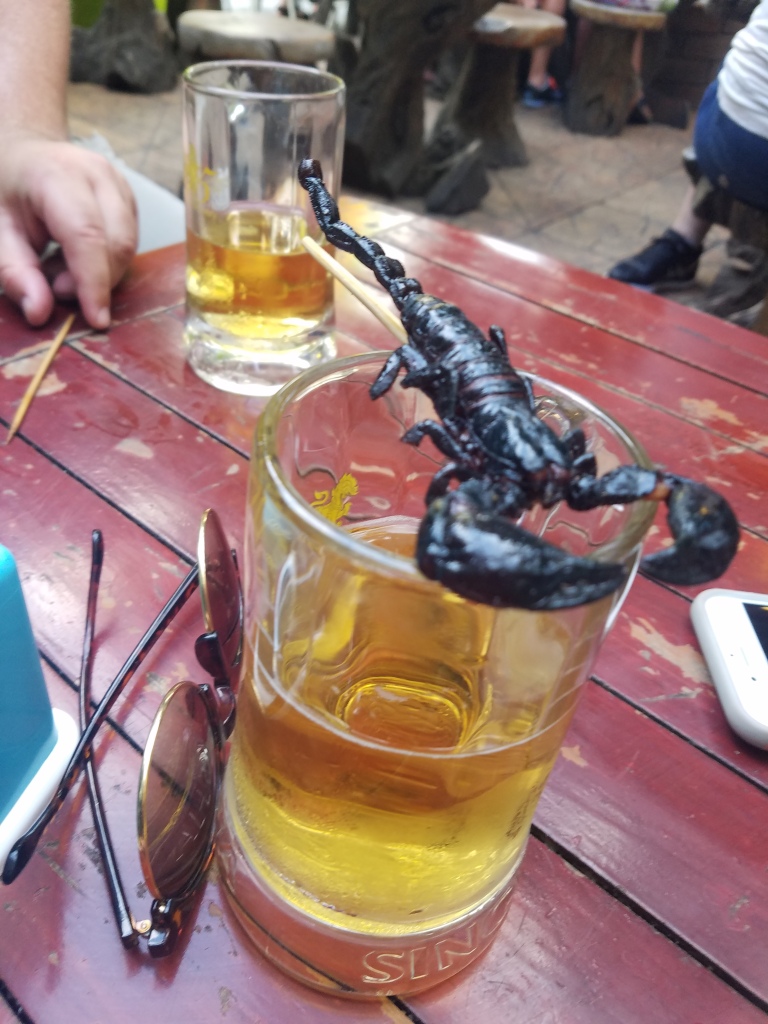 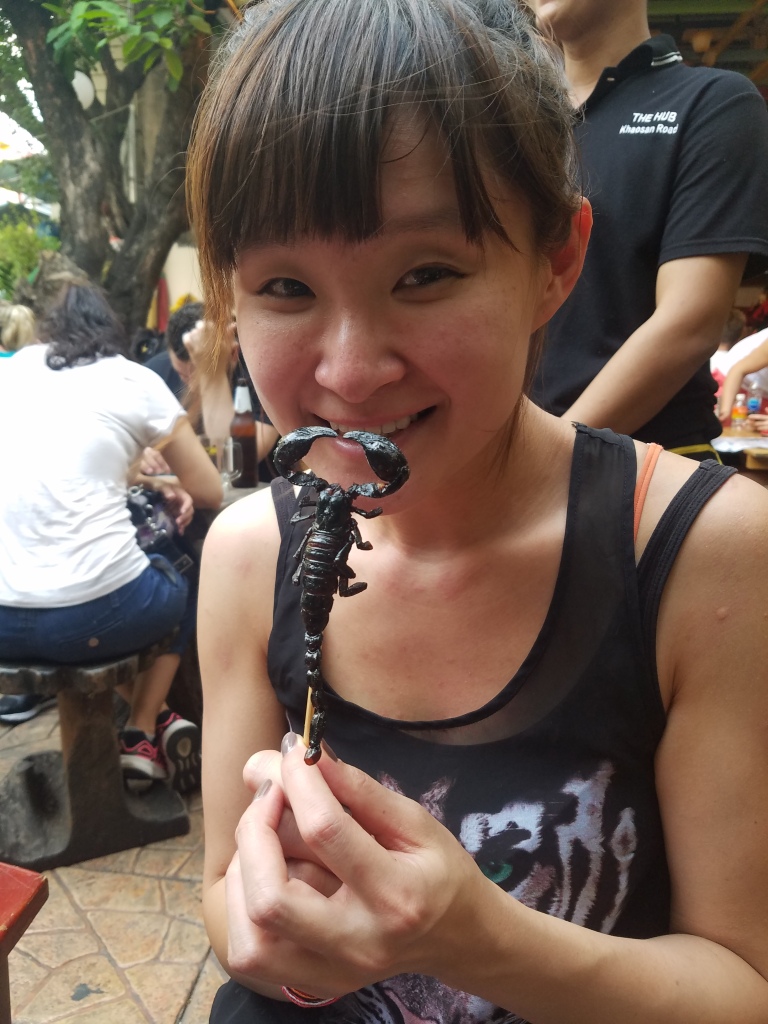 On the way back to Pannee Lodge we stop in at one of those Fish spa places just for shits. This is one of those spots where you sit on a bench, put your feet in a fish tank and let the fish eat all of the dead skin off of your feet. We get set up and wow does it feel weird. The fish seem crazy interested in my feet for some reason. They flock towards my feet and just start going at it right away. They’re in between my toes and nibbling at the soft spot on the bottom and instep. It sends shivers but I’m able to maintain. I’m basically wearing fish boots now.

“How are you doing that, man?” MacKay and Drisdelle were both born on the fairer side of foot sensitivity. They can barely handle it for a few seconds. They look hilarious as they scrunch their arms and faces into contorted forms and grimaces while these little fish nibble at their tootsies. We grab a round of beers and spend 15 minutes in strange discomfort with our feet in the tank. 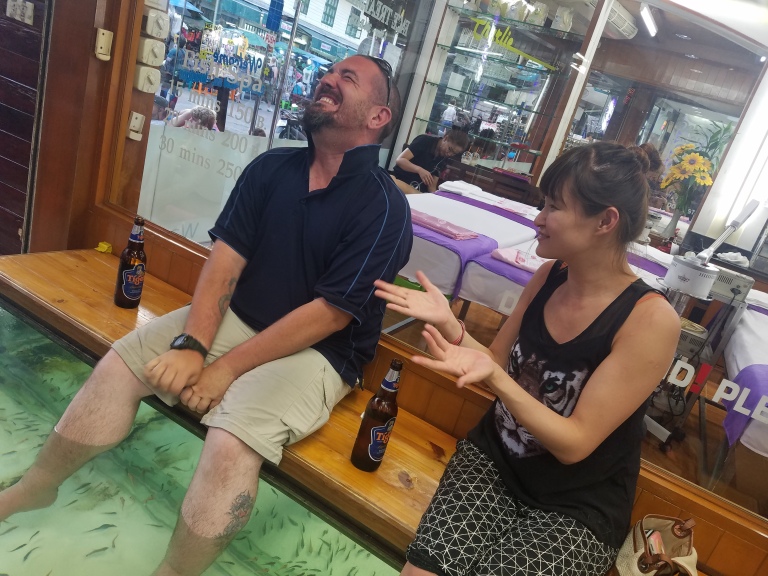 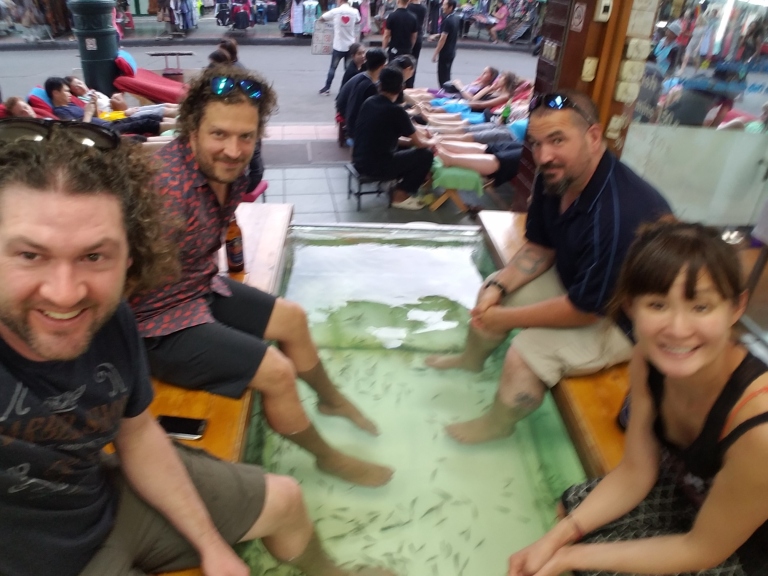 We grab some black and coke supplies and hit the outdoor patio at Pannee Lodge. “Ladyboy Show?”, “Yeah we could go to a ladyboy show I suppose.” We spend an hour or so outside in lethargic indecision. The heat and the travelling is exhausting us and our decision making capacities appear to be compromised.

Drisdelle gets a passion fruit smoothie from the place next door and somehow with it comes a semblance of life. Add a little vodka. And then another papaya juice one. And then a mango. And, alright I think we’re back, where are we going?

The whole time we’re on the patio a Tuk Tuk driver has been trying to convince us to go to more ping pong or just straight up 2 hours of sex. We convince him that we’re more interested in a club or night life. So we pile in a cab with him and he takes us through Bangkok to some undisclosed night club. We’re at the mercy of his nightlife tastes.

The cab drops us off outside a bumping place called Impact 39. The music is pumping hard and a series of gentlemen in suits leads us up to the front door. We pay the equivalent to 5 bucks to get in and it comes with a drink. Through the doors and it opens into a large room with a raised dance floor in the middle. Fairly dark, just neon lights and laser dance music from hell.

We do a round of the place and it seems… it seems really lame. In direct negative correlation with our Green Mango experience, this place just seems to suck. And the people here were odd. It feels like just pairs of hookers ringing the central dance floor. And no one was on the dance floor, maybe because it was too early or maybe because the music was simply too demanding to actually dance to. All the molly and redbull in Bangkok and you would not be able to maintain with the pace and tenacity of this music.

But we get ourselves a pitcher of margaritas and try to dance it up nonetheless. There are some really done up ladyboys just off our table and Queenie tries really really hard to get them to dance with us, but they don’t seem interested (tonight…). “You can’t force it Queenie. Just relax and if the ladyboys want to dance, you’ll know.”

Between drinks I hit the bathroom. On the way out a guy at the mirror says something to me in German. I fumble over some form of ‘no sprechen sie deutsch’ and he apologizes to me in English. “Do you find this bar weird, man?”, “Yeah, I do”, “It seems filled with hookers or something, I can’t figure it out”, “Haha that’s what I was saying!”

This guys name is Martin. He’s with a buddy named Chris. I’ll just call them Chris Martin cuz it’s funny. They’re from Stuttgart and Bavaria respectively. Chris Martin thinks the bar is full of hookers. I do too. We decide to have another drink and think about our options.

After some inquiries with the bar staff we deduce that most places will be closing shortly. My friend Simon from back home had mentioned a place called Soi Cowboy to me but the staff here were assuring me that it was closed. Since the King’s death the revelry in Bangkok has been brought to bear around midnight. There was one place that kept coming up in our queries as being opened until 2am though. It was called Hollywood. Fuck it, let’s go to Hollywood. Can’t be any worse than Hookers 39.

We share a cab with our new German friends to Hollywood. We get led inside to another swanky looking foyer area with pumping dance music emanating from within. They bring us a menu with bottle service prices on it. Things are fairly cheap considering, but we’re a little thrown off by the fact that you have to drop down on a bottle before even entering. “Well, what else are we going to do?” And with that German logic we’ve got a bottle of Smirnoff in our hands and are heading inside.

The doors open and this place… sucks. It just sucks. It’s a square room with a little DJ podium in front of a series of tables. There is a smattering of people in the main area and then just empty tables and shittery. Lighting, decor, music.. all shitty. Man, what a let down. “Well, we have a bottle of vodka”, and with that German logic we posted up to a table on the outskirts with our Smirnoff ready to make the most of it.

A guy comes over to ask what we want to mix the vodka with. I tell him some soda, coke, maybe some redbull. He comes back with 2 of each, a bucket of ice and some popcorn. Alright whatever, this isn’t all bad. We mix up some drinks and take in the scene. Oh wait, there is no scene. This place sucks. It’s actually worse than the first place. Well there’s real people here at least, not just hooker robots.

The mix dude comes back to the table with a receipt. He wants money for all the mix haha. Of course, of course, and the popcorn too, that we’d never asked for but have already eaten half of. What a racket. We manage to push off the sodas and redbulls and just pay for the cokes. This reminded me of ‘Lady Tip’ night in Beijing… but that’s a story for another time.

At this point we’re kind of drunk and sour about just being straight up white guy hustled basically all day. I give Chris Martin a high five and tell them we’re ready to split, “You enjoy the rest of that bottle, we’re outta here.”

We grab a quiet cab ride back to Khaosan Road, the detectives all drunk and sleeping in their corners as the neon lights of the city slide by across the windshield.

Back at Pannee Lodge the front desk person has three packages for me: Fresh Laundry, A James Bond Shirt, A Custom tailored Red Suit Jacket. I rush up to the room to try it on. Haha shit! Looks pretty damn good!