Hendrik and I head downtown to kill time. He’s got a shuttle coming to pick him up from the cabins around 2 pm. I have literally all day to kill – I went to the bus station first thing to investigate buses south. The next significant place is Rio Gallegos, but there’s not much there apparently, so I said to hell with it and bought a 17-hour ticket to Ushuaia leaving at 3 a.m.

After some coffee and souvenir shopping we head down to the lake at the edge of town. Hendrik’s short on time so we promise to keep in touch and he heads back but I decide to walk the path around the lake… Until I see that it’s only about a mile and a half long and requires a $10 entrance fee. There are flamingos on the lake but whatever, I’ve seen flamingos before. I double back to town. On the way I see a small museum. It’s also $10 but they’ve got dinosaurs so I’m in.

The museum’s divided into three parts – dinosaurs, early man in the area, and recent (1800s – 1910) history. The dinosaurs are the best, especially the australoraptor, related to the velociraptor: 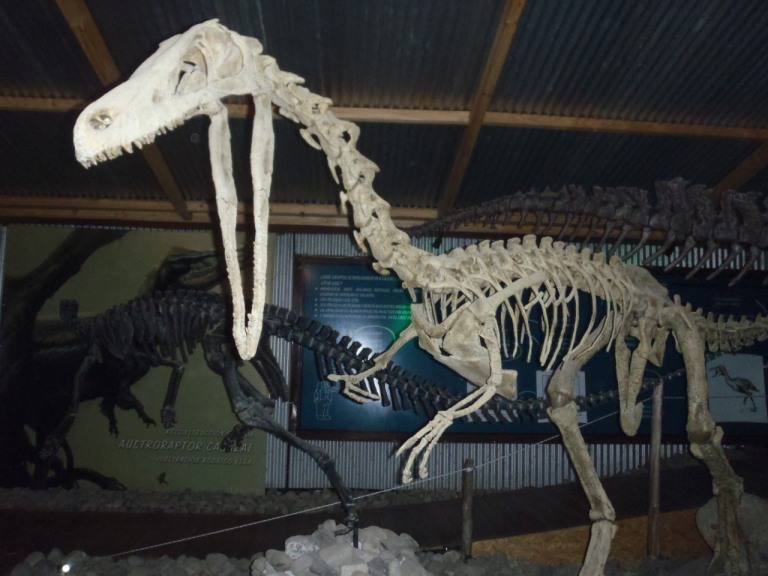 The display explaining the relationship to the velociraptor unnecessarily translates “velociraptor” to “speed-abductor”. I can dig it.

Although there aren’t fossils, there’s a description of an early bird that lived in the area. I can’t remember the scientific name but the colloquial name is the apt “bird of terror”:

The early man section is mostly forgettable but the recent history section is pretty interesting, describing some of the atrocities committed against the indigenous people here. There were numerous stories but one that stuck in my mind was the late 19th-century creation of a museum dedicated to indigenous artifacts – the people themselves were used as forced labour at the museum, and when they died their bodies were put on display. One chief worked there for several years while his just-deceased wife’s preserved body was an exhibit. Some of the bodies weren’t taken off display and given proper burials until the late 1990s.

On the way out the woman at the front desk prepared me a cup of hot yerba mate. I’ve seen this stuff all over the place but not usually for sale (except unprepared), this was my first real chance to try it.

It’s quite bitter and a lot of tourists take it with sugar but I declined and drank it straight. I like it, quite a bit. Apparently its stimulant affects some people more than others – Hendrik said it’s more like a drug than a drink for him – and I’d say the same was true for me. I felt wired and very focused after drinking it. Good stuff.

I went back into town but with nothing to do I stopped by a small guesthouse and asked about prices. About $20 a night. I asked if I could just hang out in the living room, use the Wi-Fi and access to the bathroom for the rest of the evening – the owner agreed and let me kick it for about $8.

Late in the evening I headed out for a good meal before the bus ride. A lamb burger and two big mugs of stout. Fantastic. I head up the hill and spend the next couple hours lying on a bus station bench, when I see Damien and his crew. The bus is outside so we all pile on.