Wake up late and put on some clothes, take the credit card to the liquor store. One for James and two for me cuz tonight.. I’m leaving on a jet plane. Fuck..

While we’re sitting there a couple of server dudes across the street break into an epic tickle fight. What’s going on with all the tickle fights? This one is a mix of martial arts and feathery jabs to the tickle region of the rib cage. Fake kick, swoop in with the tickle finger, Ha-zah! Arch back, giggle, run away. Again! Fight!! MacKay and I decide there just isn’t enough tickle fights in North America. I will say that a well timed tickle fight does lighten the mood. It’s hard to be upset when you’re giggling like a school girl on nitrous. 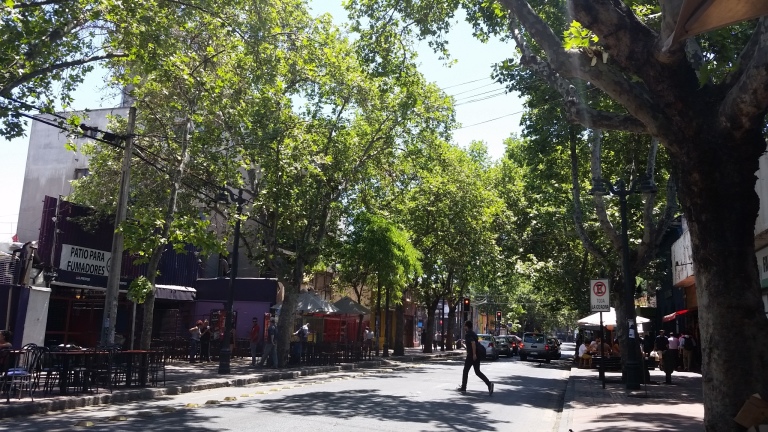 Full of shit on fries and looking around at the clear sky and the trees along Pio Nono, I mention to MacKay that I’m feeling lucky. But it isn’t luck (I think this blog may be a testament to how laughably unlucky we are). No, we make our opportunities and take them. So maybe just an appreciation of things was settling in. These cities, these moments, I love doing this shit. High on that excitement we start plotting the next adventure. Looking at a map, we’ve covered a lot of ground already just between the Mongol Rally and this Pan American Roadshow of Tomfoolery (PARTy). But the world’s a huge place, there’s lots of room for another large scale debaucherous roadtrip. Or perhaps something nautical? After some thought we narrowed it down to two obvious choices… but, as of now, only those with DFN Level 9 Seguridad authorization are privy to this information.

After brunchfast we actually do take the credit card to the liquor store for some blog supplies. We nab a bottle of rum and head back to Kombi to set up shop. Bzzzzzzz. Who is it? Ferris Bueller. Bzzzzzzzzz. We’re in. 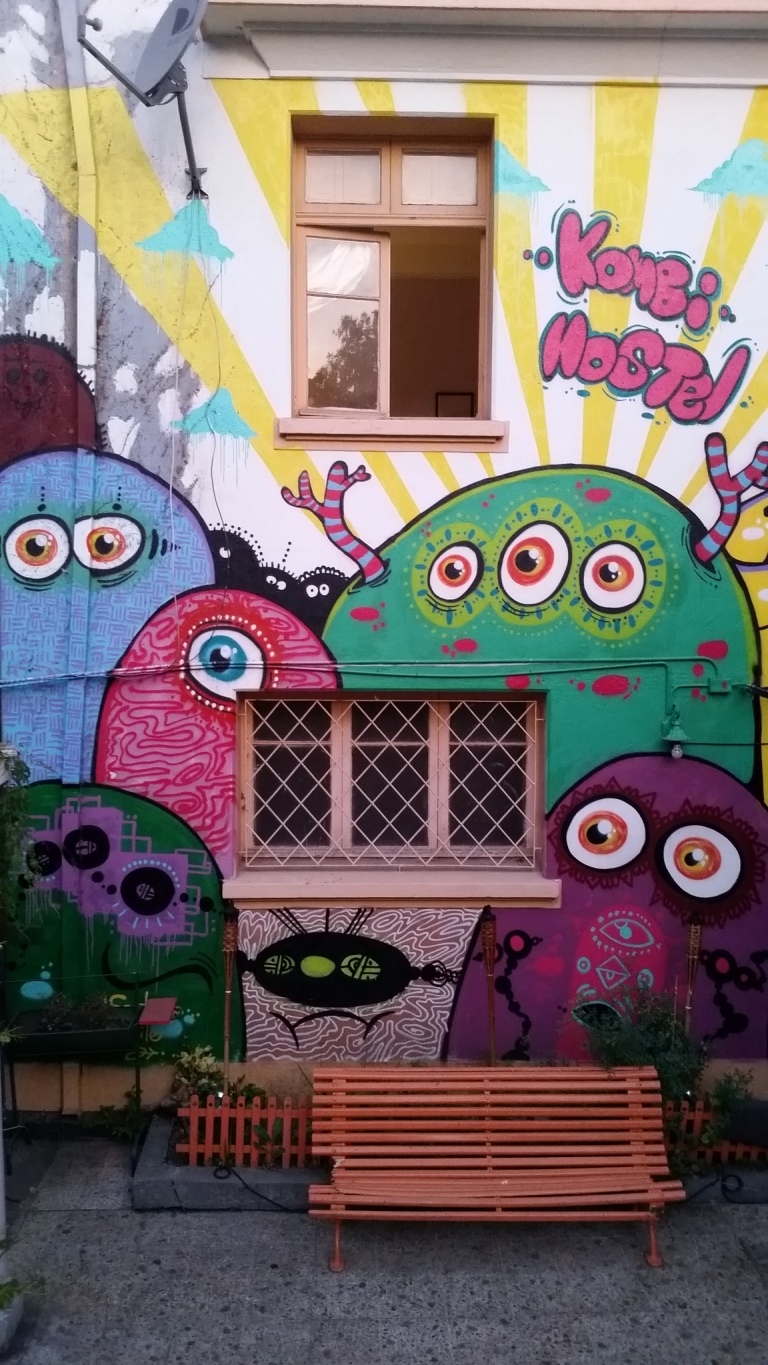 We hit a picnic table on the outdoor terrace, pour some inspiration, and crack out the lappy. There’s an early 20s guy out there rolling his own cigarette. He looks like the lead singer of Wolfmother. He asks for a light. Accent gives him away as French. His name is Max, we ask him what he’s up to and he tells us he just got to South America and that he makes jewelry. He’s going to buy a truck and travel around, sleeping in the back and collecting jewels and stones to make jewelry. He wants to hit smaller towns and villages, not the big cities, and learn from local jewelers. Then bring his new found knowledge and materials back to France and apply them in his own work. This sort of youthful idealism makes your heart shoot rainbows, but in reality I’m not so sure how safe it’ll be in outskirts towns sleeping in the back of your truck with a pile of rare stones. Nevertheless, we’re all for it and tell him about some of the places we’ve been that might be good for that sort of shit.

“So what kind of truck are you going to buy?”, MacKay gets all excited and whips his lappy around with Hilux images already searched for, “You should get one of these man, they’re awesome.” Max hasn’t heard of them. “Yeah, you can only get them in certain areas. Or one of these”, pulls up a pic of the Patrol. Max is impressed but it wasn’t quite what he had in mind. He searches the inters for a truck his buddy used to have (can’t remember what it was exactly) and pulls up a pic of a pretty sweet old truck/van. Looks about perfect for the type of adventure he’s got in mind, and it has a rad band tour van feel to it. We share some rum and Michaela comes out to join us.

I set up a shuttle to the airport with Front Desk Guy, then MacKay and I spend the rest of the day crushing the bottle of rum and writing posts. Like Agent Getz a couple days before, I’m now on the countdown to reality. It’s not an easy feeling, finishing up an adventure like this, and as the rum began sapping away my logical reasoning I was ready to say fuck it and continue on with MacKay down to Tierra del Fuego. When the shuttle never showed, an hour went by and Front Desk Guy was apologizing profusely. I said I didn’t care if it came, I didn’t want to go anyways. I almost had myself convinced. But I couldn’t do it. When we were in Mendoza I’d found out that my Grandmother had passed away. It wasn’t so much getting back to work in Cali that was bringing me home, but getting back to Nova Scotia to be with my family. There’s nothing more important than that.

So with flight time clicking down I grabbed my shit and walked out to the road with MacKay to grab a taxi (everything turns into a race). Michaela came along, worried the cabbie would try to rip me off. Hail a cab and Michaela says it’s about $20, not bad. She gives me a hug, “It was really nice to meet you. I hope I’m not ruining this bromantic moment.” MacKay fakes for the tickle fight and turns it into a put’r there shake and man hug combo. “Crazy good trip, man. Have a safe flight to Scotia”, “Ya man, you be safe finishing this thing”, “Nope.” Down to one Adventure Detective.

The cab ride is surreal. Watching the city blur past with a kaleidoscope of thoughts swirling in my head. Family, work, friends back home, my band, Queenie and Birdrito. There’s a slow transition happening. My detachment from real life is deteriorating. Priorities already beginning to shift back. The airport is a hazy frenzy, but I make my flight. On the plane I swipe through all of the pictures on my phone. Through every country, all the way back to the hurricane and the very start of the trip. Holy fuck we did a lot! Saw a lot. Survived a lot. (Drank a lot). Met a lot of amazing characters. Visited some of the world’s greatest and most beautiful places. We had the time of our lives. Again! Fit a year’s worth of experiences into 2 months. My second trip of a lifetime.

Then I started thinking about home life and all of those comforts we take for granted day to day. My super comfy, cozy bed (aka Pillow Mountain). Hot fucking shower. Any time I want. Just being clean for two days in a row sounds amazing. The little convenient things you don’t even realize are important until you’re without them. I don’t think you can fully appreciate all of the things you have until you step away from them for a while. Especially when you travel through some places where things you feel are essential just aren’t there. It puts things in perspective (and many of those things aren’t essential btw). And then in a way, you do feel lucky and you can look at your life with new eyes again.

But more important than that realignment are the pieces you bring back as part of you. The cultures and lives you meet leave lasting impressions. You sometimes find a piece that fits you like it was always supposed to be there, and you add it. Or sometimes you find a piece that you didn’t even realize was a negative part of you, and you can now discard it. These sorts of subtle improvements come from simple exposure. If you’re always in the same environments, you will always act the same way. So go some place ‘uncomfortable’ and meet people with different values than you.

10 hour flight to Toronto and then a gigantic layover before Halifax. Getting from Santiago to Halifax takes 26 hours total. I pretty much crash the whole time, exhausted from the trip. I meet my bro in the airport, he just got in from Vancouver. My parents show up shortly after to pick us up. I’m wearing shorts and a t-shirt and there’s snow on the ground here with a wind chill of what feels like minus 5 billion. A sense of familiarity settles in though and it’s good to be home, despite the circumstances.

Still I can’t help but be jealous of McBurger, still booking it south to TDF. Still in the thick of the adventure. Still lots left to see. And still Rally Hard. We talked and reminisced a lot over that bottle of rum and kept coming back to the same point. Probably the most important takeaway there is: You only live once, so fucking live it up!

And that’s what he’s doing. The adventure’s not over yet…

One thought on “Diesel Out”