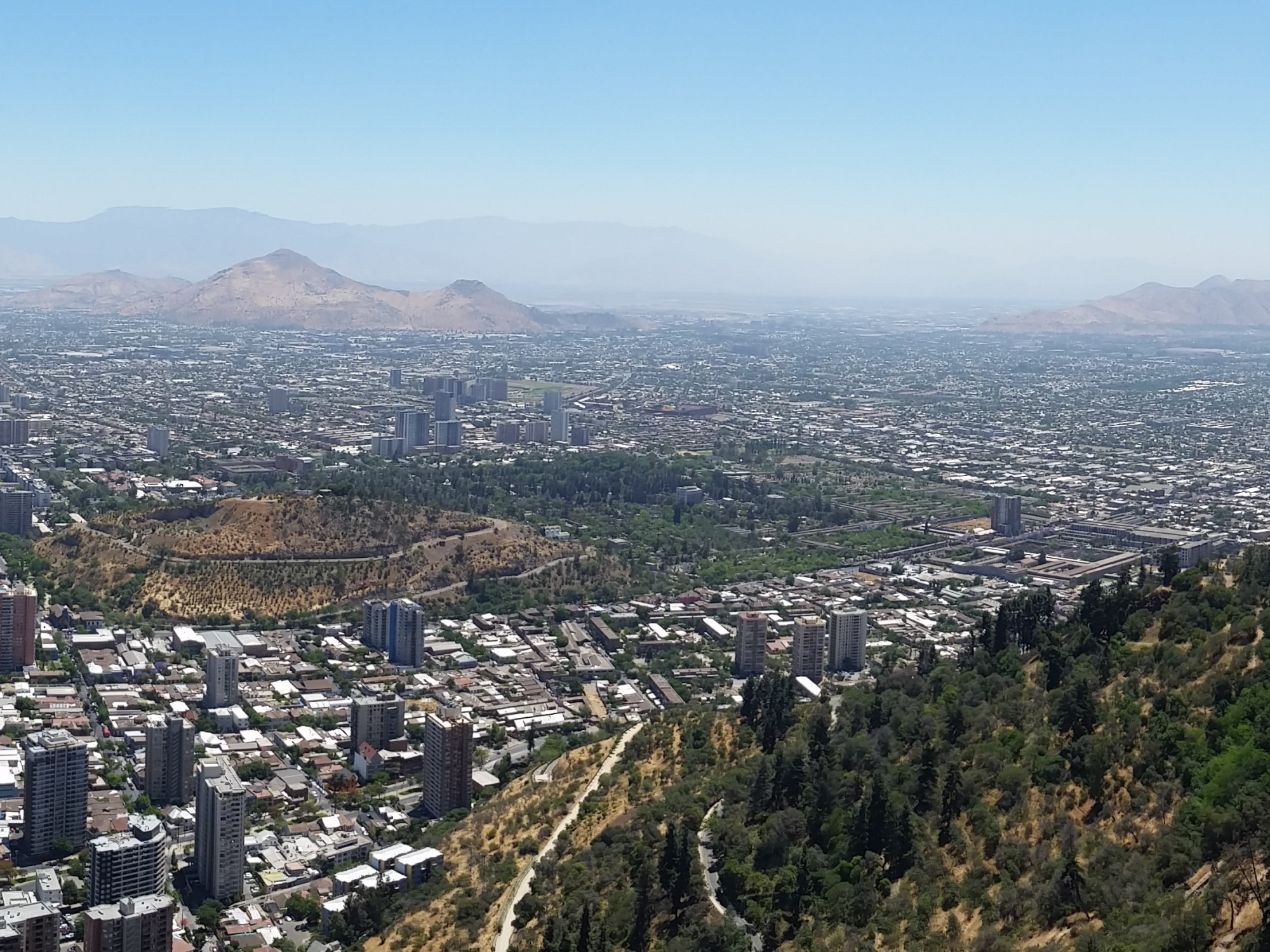 Wake up late and cloudy. Head downstairs to see what’s what with the Hardy Boys. Rap on the door and one of the guys swings it open. I’m instantly hit with a wall of putrid filth stench. It’s thick and meaty, like a hanging stew. I reel backwards up against the wall across the hall, “What the fuck?! Did someone hurl in here?”, “Nah man, there’s no window.” Sure enough it was a small room and the only window was back out into the hall. Having that open would not only advertise your passed out status to anyone walking by, there’d also be no buffer to shield other hostel goers from the rumble roar of the dengue snore. I weave my hands in the air like I’m doing the breast stroke, as if I can diffuse the stench long enough to get another word in, “How are you guys even surviving in there? It’s horrible.”, “It’s not me man! It’s the room.” I look around at open backpacks and well traveled clothes piling out of them onto the floor and I’m not convinced. But MacKay is defensive and adamant. I give one last questioning and pitied look at Drisdelle. “Well I can’t stand here any more, I’m gonna pass out. But we should do something, it’s getting late.”

I go to the living room and try to shake off the stew. It doesn’t seem to bother Kombi the hostel cat any, she jumps right up on me and starts the whole rub my cat pheromones over every available inch thing. Kombi is in heat big time. Ok bud, down you go. The hostel has some very cool artwork around. We really liked the series of famous people in band t-shirts that were on the Kombi walls. 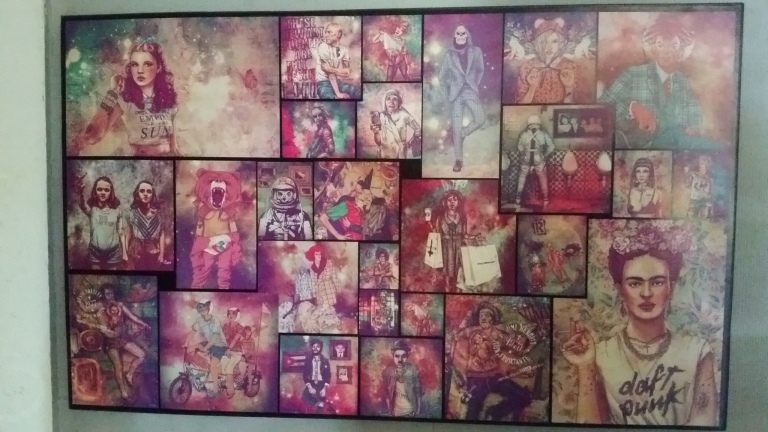 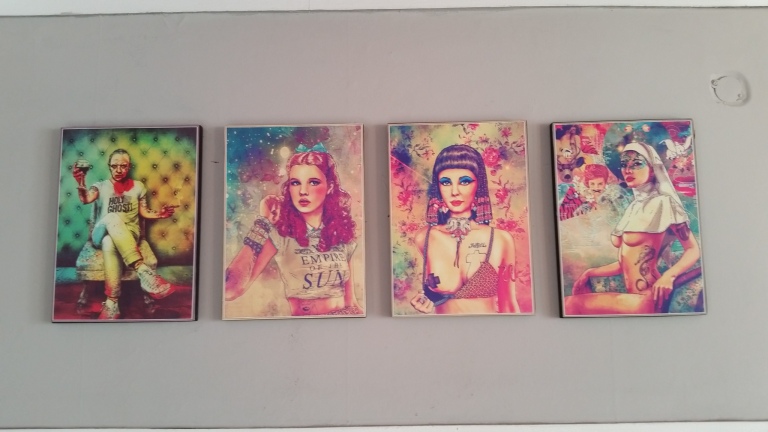 We tell MacKay about the little Batman freak out from the day before. It’s Drisdelle’s last day and we’re gonna take the funicular up to the zoo. MacKay is out. His funds are running low and he needs to conserve if he’s gonna finish the trip to Fuego. Fair enough.

Drisdelle and I head to the funicular which is just around the corner in the Bellavista area. There’s what looks like a castle gate as the entrance. The Metropolitan Park on the hill above is the largest urban park in Chile.

We go in to scout things out but it turns out the zoo is closed on Mondays. Of course it is. We can still go up to the look off and see the city from up there. Sounds good, we’re in. We grab some tix and get in a snaking line waiting for the funicular. It takes a couple of trips up and down before we’re able to get on. Seems like a popular thing to do. The funicular is this old green box, like one section of a train, but open to the air. It runs on rails up the side of the hill at a 45 degree angle. We step in and a few minutes later are pulled up the hill. The view of the city gets better and better on the way up.

We get out to a number of gift shops and convenience stands. Dana and Samara are up there as well so we take a sec to catch up and tell them about our night. We all meander over to the lookout and the view of Santiago is superb.

Above the overlook is a large statue of the Virgin Mary. Drisdelle and I climb the side steps up and snap a quick upskirt.

Great view off the side from up there too.

We walk around getting pics and panoramics. Doesn’t seem to be anywhere else to go up here though. After taking some snappys we board the funicular back down to Bellavista. We pass through the Patio area of Bellavista on the way back to the hostel. This is a more upscale seeming area with lots of swanky kinds of restaurants, art stores, knick knacks, and clothing shops. We pass by a winery tour place and I pop in to inquire.

There’s a dapper gentleman behind a counter, a flat screen showing pleased tourists in lovely wine country, and a collection of wine bottles along the wall. Most notably there is a giant 5 gallon bottle of Casillero del Diablo on the counter, the official wine of the rally. Wine Guy speaks fluent English and is great to talk to. He tells me all about the different wine regions in Chile and about the tours offered there. I book a tour for tomorrow that goes to Valparaiso, a nearby city to the North, and a winery named Vina Indomita in the Casablanca wine region. I pick up a ticket for MacKay as well since he says he can’t afford it. I’d rather pay to have him come along than go solo and have him sit in the hostel all day.

Back at Kombi. Bzzzzzz. Who is it? Rumplestiltskin. Bzzzzz. we’re in. In an effort to escape the torrent of shit on fries dishes we’ve been facing, Drisdelle looks up a traditional Chilean place for dinner. It’s called El Caramano and it’s just around the corner. We walk on over and duck in. Cool spot. Kind of fancy seeming but one whole room is covered in marker. Past patrons have signed their names or written somethin clever or made a little drawing, and the surrounding walls are scribbled over every available space. There’s no one in the place and it feels closed, but a server seats us at a table and we start reading the walls.

Menu looks super nums, I go for a salad and a marinated chicken that is stuffed with sausage, sun dried tomatoes and onions. It was delicious. Drisdelle gets a stew sort of thing that is made from corn, like a mac and cheese, er.. hard to describe. Also good though. And MacKay gets a massive plate of shit on fries topped with an egg.

After dinner we basically wind down the day blogging while Drisdelle paces back and forth in the outside area, dreading the fact that he has to go back to reality tonight. The front desk orders Drisdelle an airport shuttle and the countdown begins. Back to work. Gross. Front Desk Guy also tells us that there will be a huge electro dance party at the club next door tonight, and people at the hostel get in for free. “On a Monday?”. “Yes, it’s one of the biggest nights”. Wow. “Starting at midnight. There will be a line down the street to get in. Goes until morning”. Oh dear.

Drisdelle packs up his stuff from the stank room and gets it ready out by the front desk. The shuttle is running a bit late, the guy is lost looking for Kombi. We go out into the street and take a look. Sure enough, the club next door is setting up a velvet rope to manage the line for tonight. On the next block I can see a van backing up. “Pretty sure that’s your guy”. The Van backs up to the stop sign it just drove past. Waits for a car to go through the intersection. Then backs up through the intersection and is swerve peeling backwards down the street. Pretty sweet move. We wave him down and he pulls up by the hostel. A tall dude gets out and grabs Drisdelle’s bag and heaves it in the back. “Awesome awesome trip, guys.” It really has been, sucks that the time is closing down. We have a round of man hugs and fist bumps and send him on his way. Damn. Back down to just two Adventure Detectives.

Back at Kombi we just take it easy. A little too wiped for a Monday night rave, plus we have to be up and out early for the tour tomorrow. I hit the hay relatively early. Close to midnight I can hear people outside. The music starts up at the club and it is super loud. The bass from the club is rattling my room. No wonder Kombi gets in for free. There’s a mirror hanging on the wall and it’s rattling agains the wall to the beat. I get out of bed and take the mirror of the wall and put it on the floor. Should I go to that dance club? People are drunk laughing out on the street. Nope going to bed.