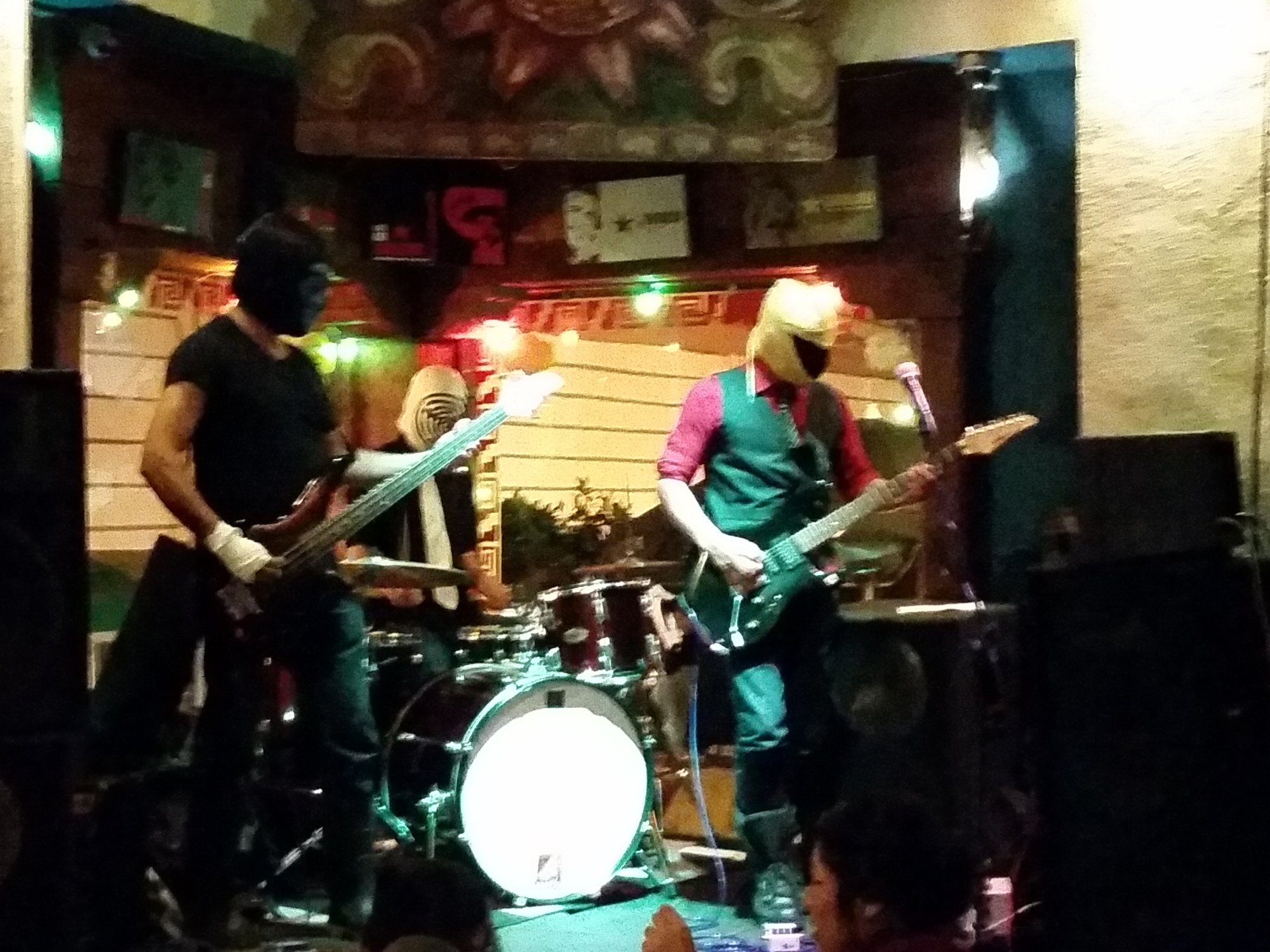 After catching a pretty decent buzz at the pizza joint and waiting for the rain to subside we returned back to our shitty hotel room to drop off our swag and headed back out on the town. One beer in some place so completely nondescript that I can’t actually remember it, then off to a bar we saw on the way over, the Revolucion Bar. The band caught our eye on the way back, three guys rocking out with lucha libre masks on. 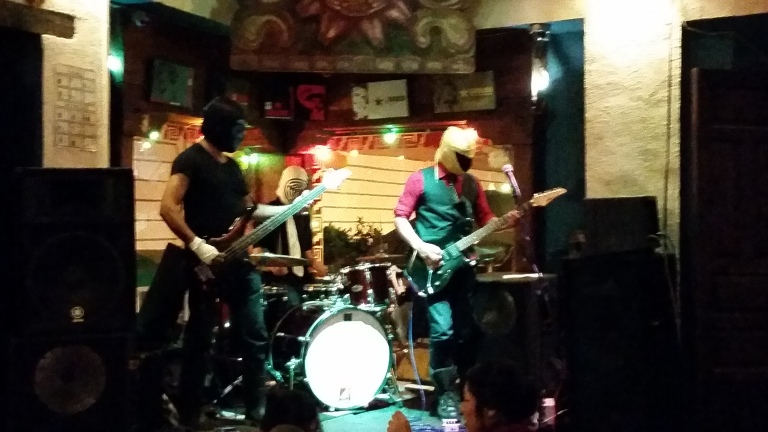 Walking in and the place is jumping, the band is on a Mexican surf vibe. Pretty jammed and no seats but the waitress tells us there’s another bar with seats upstairs so we hit it up. The music is still completely audible when we saunter up to the bar. We asked the bartender the name of the band. “Shitty Gombi”, it was loud, “What?”, “Shitty Gandhi”. “Ahh… wha…?”. Dunno. Maybe Shitty Gandhi? Time for a drink. 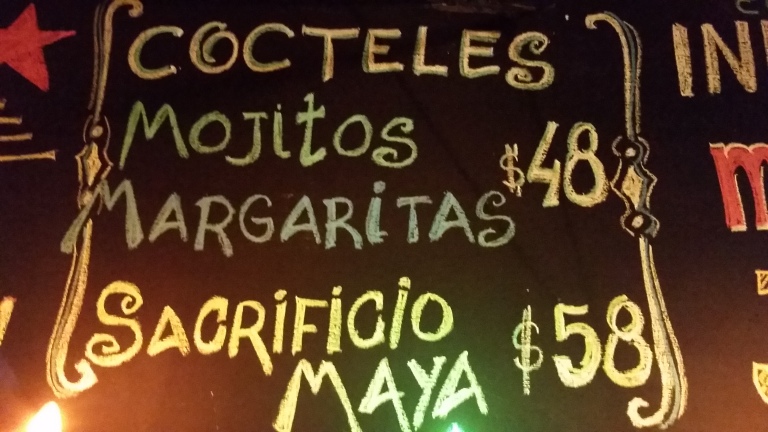 Guess what we ordered three of? Our bartender pulls out three glasses and tosses in various liquors we don’t recognize, then abruptly disappears to the back. What the fuck is he putting in there, blood from a fresh sacrifice? I catch enough of a glimpse into the kitchen to see him popping all three into a microwave before he returns and pours three partial glasses of soda water. He comes back with three glasses of hot booze and this happens:

Decent drinks, warm after being mixed with the soda water and with a bit of grittiness because of whatever powder was lit on fire (cinnamon, maybe?) but a good flavour. We head back downstairs to try to nab some viewing chairs and grab some, completing the sacrificial ceremony and then grabbing some wine and mezcal. The bar had a really cool motif that lived up to its name, lots of pics of Che and Fidel, definite sympathies towards the EZLN and pro-Palestinian art visible here and there.

Hunter and I hit the front patio for a smizzle in the drizzle and end up meeting two stunning girls from Spain. They are trashed and making out while their other male companion looks on protectively from inside the bar. We get introduced. Emma and … on three attempts, I’m gonna say.. Sarnawolmithra?? We start travel talking and they hear about the Argentina goal, ‘So do you speak Spanish?”. “Nope, not really”. They break into a 4 minute laughing fit.

Everything is cervezas touchy-feely going back into the bar but Protectobro is quick to dismantle. It’s cool, don’t wanna step on any bro toes. He ends up being a super nice guy from Guadalajara. They’re all in Tuxtla right now and came to San Cristobal for the weekend. Seems to be what most people are doing. Actually the vibe in SC/dlC is that of a European party town and it’s in full swing here on Saturday night.

We grab another bevvy and the band wraps up. The music they throw on kind of sucks so we roll out. At a corner Murphy swears he heard live music so we should go in that generally direction – I only hear AC/DC but that’s enough to convince me anyway. We find another jam-packed bar that is playing AC/DC, but also has a live band that just went to take a break. Pull up three seats across from a couple of girls, one from Ottawa, one from Holland, who tell us the band is pretty sweet. Right on. We get some beers and wait.

When the band comes back on they launch directly into Another Brick in the Wall (Part 2). Smiles all round. Beers all round. They’re great. Good selection of known covers in both languages and I’m guessing some original stuff too. The bass player steals the show though. Not only is he a funk run master, his antics, and mostly his eyes, keep you zoned in on him the whole time. And it pays off. He’s fucking talented, a good showman, and funny.

While we’re watching the band a girl from a neighboring table comes over and introduces herself. First thing i notice is she’s totally jacking my hairstyle (on a good day). Her name is Jamie, I may have told her I’d try to make her look cool in this description but I totally lied, and she’s from Boston. She’s in town learning a thing or two about Global Health from a local school.

Ok, she was pretty cool. Our gang swung in with hers and we were all spun off in tangential convos over several drinks getting to meet one another. The band was wrapping things up and we were all still chatting. I had to give the bass player props as he was leaving and Jamie snapped a sweet pic of us. I may have captured a bass solo on video as well

The band, who’s name is Decibel, was splitting to another gig down the road and, now that we were their biggest fans, we went to hang with them some more. Jamie and her crew led us out. Hunter, for some reason, wasn’t coming out of the bar though. After some Marco Polo, standing midway in the street waiting while watching the posse disappear around a corner, we gave him up to the aether and sped to catch up.

Decibel kicked into another set and after some good crowd participation and some drinky drink drinkies and some dance dancy dancies we were ready for a change up. Again Jamie’s crew led the charge and MacKay and I were in tow to another location. This time it was a more Mexiflare kind of joint with a live salsa band and a smoking hot dance floor.

We grabbed even more drinkipoos and kept chatting at a table. I actually started to lose my voice from talk-yelling over music all night.

While we sat there dudes would come over and offer their hand to one of the ladies as a polite gesture to dance. They’d accept and hit the floor for a song. One such dude was a… searching for the PC terminology…little person (for the sake of this conversation we’ll call him Tyrion). This guy was a champ. I think he danced with every girl in the whole bar. Tyrion would strut over and offer his hand and not one girl would refuse. Why? The guy had swagger. He had the moves. It was impressive. And every girl came back with a slight glisten. He danced the hell out of them. It was mesmerizing.

Following Tyrion’s mojo and the vibe of the joint, Murphy took Jamie’s hand and they went out to cut a rug on the dance floor. Apparently it was Murphy’s first time throwing down the salsa but as a professional instructor myself I have to say he did a pretty decent job. He definitely stood out as well, six inches taller than anyone else and laughing his ass off the whole time.

Meanwhile I was chatting up one of Jamie’s friends who’d been to all of the countries in Central America, gathering intelligence. In particular we discussed Guatemala, since that’s our next destination. Everything we’d heard up to now about Guatemala had led us to consider the acquisition of machetes or possibly an economically-sensible firearm, but she strongly advised against such a plan, telling me that even though it’s a dangerous place and we should just drive through it, getting a weapon would be a terrible idea. Apparently a gringo with a weapon will be blamed for any incident that should occur, regardless of whether it was self-defense or not. She also warned me to stay away from the ladies. Sounds like a great place, can’t wait to get there…

We walked the ladies home and headed back to our hotel, wondering what happened to Hunter. When we walked in the door of our hotel, he was on a bench outside our room with his jacket over his head, semi-sleeping. He wasn’t terribly impressed with us “ditching” him, but hey, you gotta bring your A-game, no lolligagging when we hit the town. Even though it must have been pushing four a.m. at this point, for some stupid reason we decided it would be a good idea to go back out for some food and, if we could find it, another round or several.

Back in the direction of the bar where we’d first seen Decibel we found a taco truck that was selling what were the best tacos we’ve had so far on this trip. Shredded chicken with some kind of cheese, we probably should have called it a night at that high-water mark, but instead walked around looking for places that might let us in. Music was still blasting from behind closed doors and balconies but it seemed like most of the bars were shut-in, not allowing more people in. Hunter found some folks who knew about an after-hours spot called the “Mother Earth bar” so we tailed along behind them, but by this point we were crashing pretty hard and not terribly enthused about the idea.

The Tierra Madre bar cost us fifty pesos each to get through the door but we got a free 40-ouncers of Mexican beer after walking up some stairs from an unlit courtyard up to a balcony that circled the courtyard. The beer didn’t cut it though, we started crashing after the salsa joint and the ninety-minute gap without drinking had killed our buzzes and our patience, so we mostly just chilled and decided to bounce before even finishing our drinks. We lost Hunter again on the way out when he veered in the opposite direction of our hotel, but after chasing him down we headed back to the hotel and passed out hard.