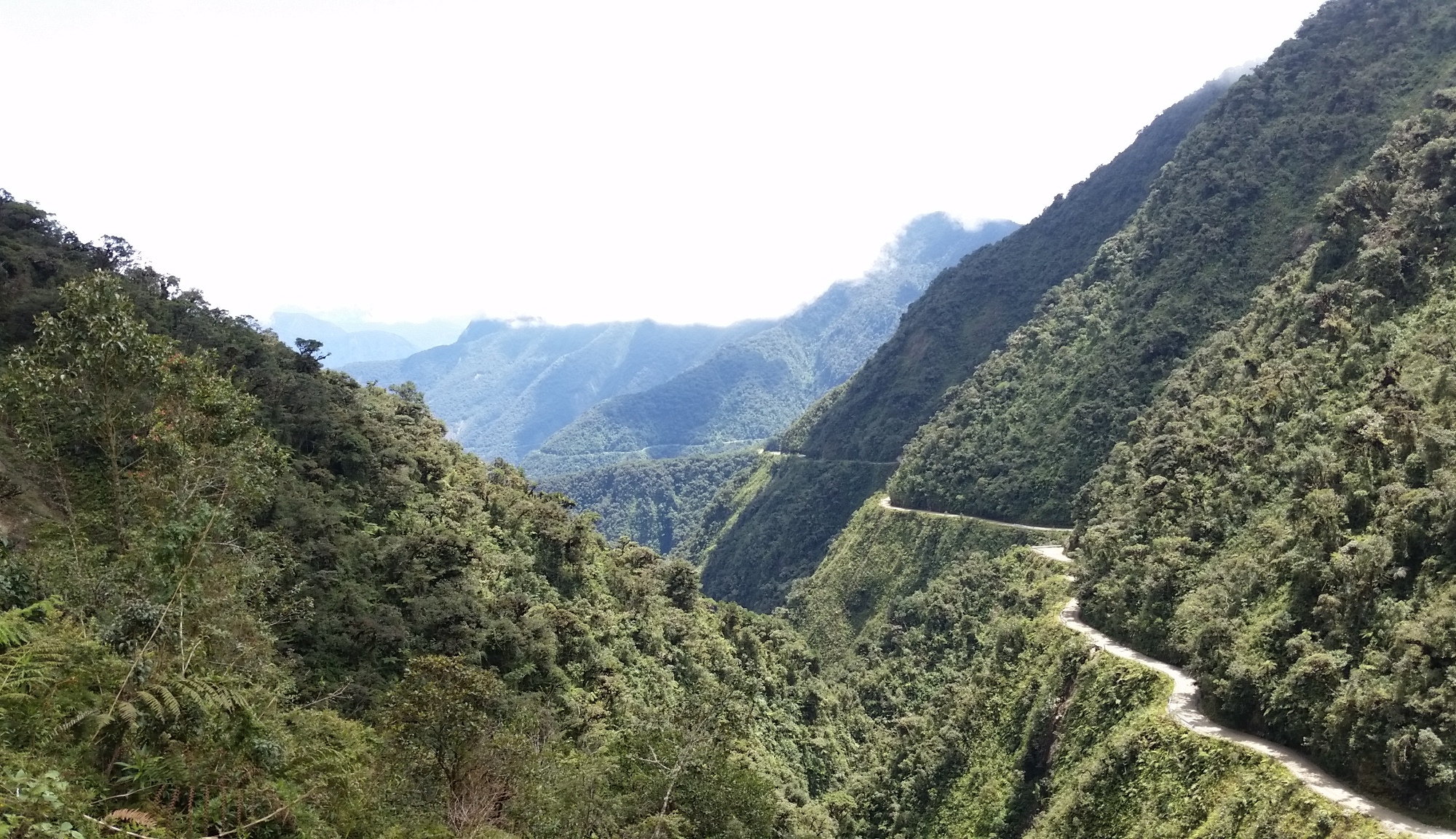 The bus from La Paz keeps gaining altitude. La Paz is already a high (and cold) city but soon we’re not just looking at snow-capped peaks, there are patches of snow on the roadside. Our bus has the bikes locked onto a roof rack and we’re headed up to a stretch of two-lane paved surface above the infamous Bolivian Death Road to get a feel for our bikes on asphalt first.

At the summit there are several other vanloads of tourists all doing the same, unloading and getting a safety talk. Our guide points out a lot of little things that make people crash with one of the main ones being brakes, they’re hydraulic and pretty strong. If you come onto them hard, you’re either locking up the rear tire or going over the front. They’ve got all sorts of safety gear but the only mandatory items are the helmet and gloves, so that’s what we go with (plus jackets cause it’s cold). The number one rule of death road biking though – “Don’t be a fucking idiot.”

The first stretch is a short one but the view’s already incredible, and we get going fast. Oh shit, this is fun already. 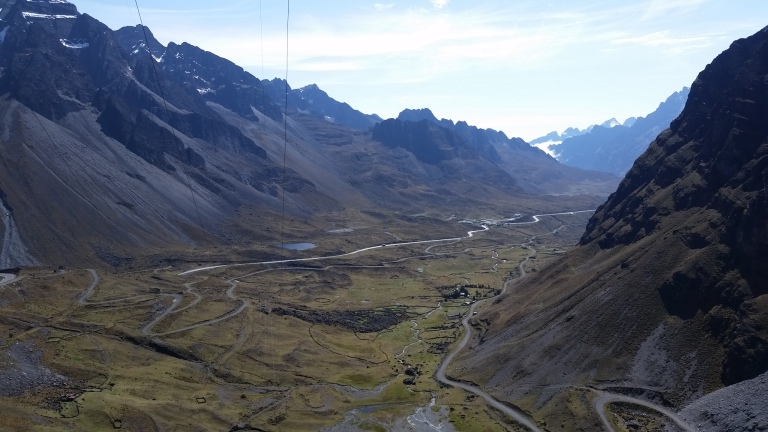 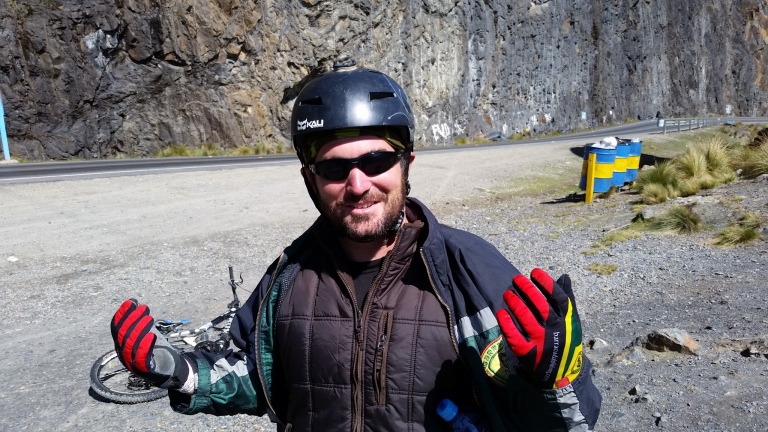 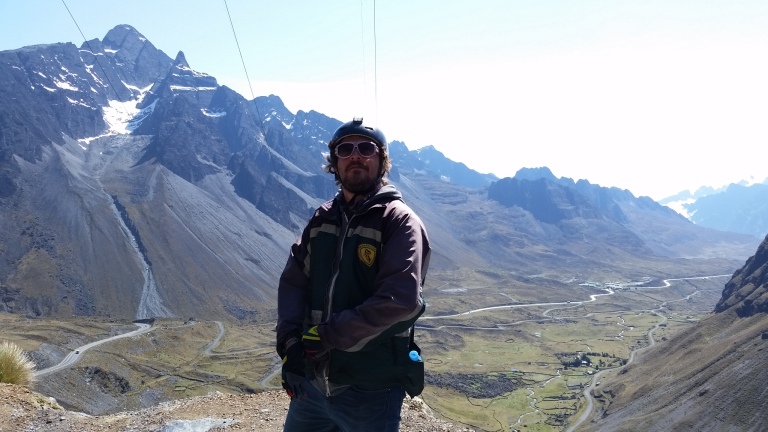 We pull over, wait for the stragglers and our guide gives us a description of the next stretch. A little longer but we’ll still get going pretty fast. There’s also a police narcotics checkpoint at the bottom, “… so if you’ve got any drugs on you, you know what to do. Take them now.”

Down the hill we fly, getting some serious speed. After the narc checkpoint the road gets shittier almost instantly – it’s still not bad, but at the speeds we’re going even a small wobble in the pavement makes the arsehole tighten up a bit. We stop again when we reach a tunnel – there’s no curb and no lighting so bicycles aren’t allowed. There’s a dirt path around the side of the tunnel though – the rocks are loose and there are a lot of little potholes, makes for some fun driving. Almost don’t notice the drop-off to the right… Still not on the “death road”, though.

Another stretch passes and we stop at some kind of toll. Every person has to pay a couple of bucks, even if they’re just a passenger. The next stretch of road is eight kilometers with a slight upward incline so since it’s not the most fun part, the guides hand us all chocolate bars while they load the bikes back on the roof and drive us down. Oh, by the way, we’ve already traveled 23 kilometers, and we’ve been going for less than an hour. Not bad considering all the stops we’ve taken. The vegetation and terrain has already changed significantly with the altitude drop.

Jumping in the buses and passing the toll, we turn onto a dirt surface. It’s foggier now and the vegetation is starting to look junglish. We do another safety breakdown, a little more serious this time, especially with regards to traffic. Unlike the rest of Bolivia, where traffic drives on the left-hand side, Death Road traffic goes to the right. Right next to the drop-off. Mountain bikes too. Here we go.

The first segment is into a ghost town, abandoned since alternate routes were built. From its peripheries the forest opens up and we can see the real deal. 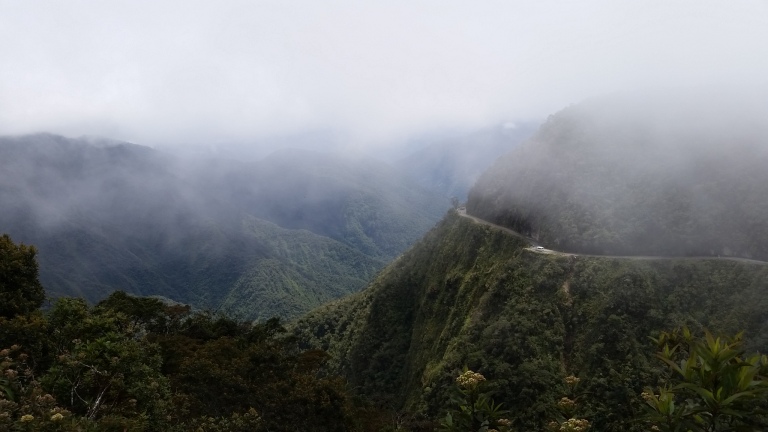 We swing around a hairpin and the road’s got wet patches now – there are hundreds of feet of vegetation above us, growing out of the side of sheer cliffs and dripping moisture. Our guide’s stopped up ahead to point out a specific precipice to us, it’s not the biggest drop on the road but it’s the steepest, it’s almost 90 degrees straight down for 1,200 feet. 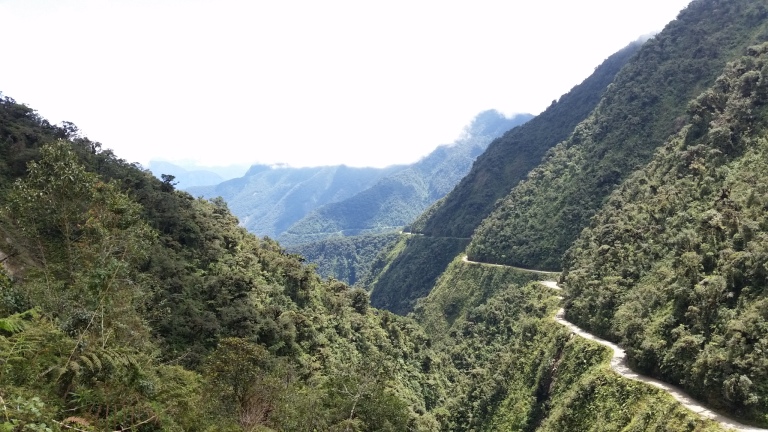 Now we’re into the groove and really starting to open the bikes up. Not as fast as we were going on the paved surface but still clipping along pretty good. A few little fishtails around corners, we’re getting braver. Mostly we’re just blowing the doors off the other ten people in our tour group, though.

We stop several more times, ten or fifteen minutes apart, where our guide shows us notable spots on the road. “Here’s where the last car went off, two years ago.” “Here’s where a bus with 108 people went off in the 1990’s.” “Here’s where a guy tried to BASE jump off, but he did it wrong and broke both of his legs.” “Here’s where Jeremy Clarkson drove his Land Rover near the edge.”

At that point where Clarkson and the Toyota are side-by-side and there’s no room to spare, it looks like it’s raining, but it’s really a waterfall. We bomb through it and get pretty damp. It’s getting semi-tropical, a lot of birdsong and metallic dragonflies around. Stripping off the layers fast now. 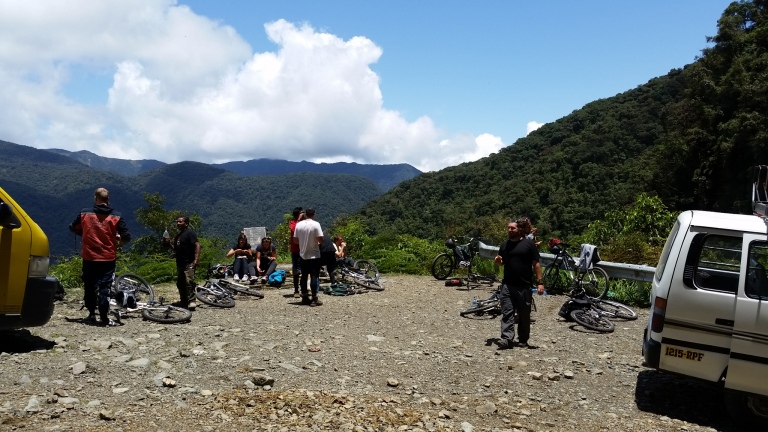 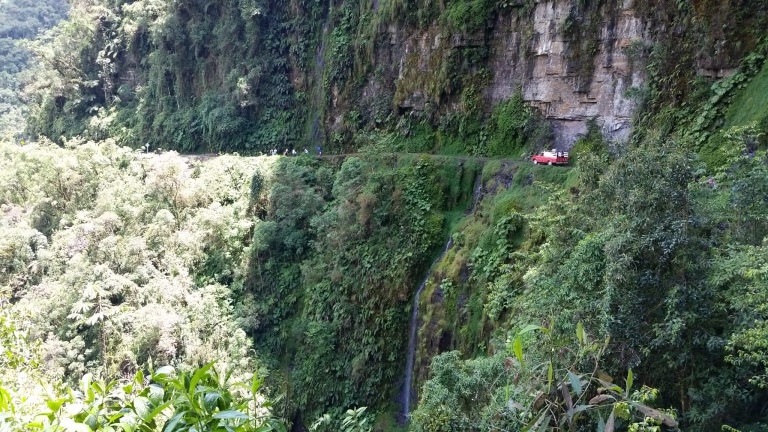 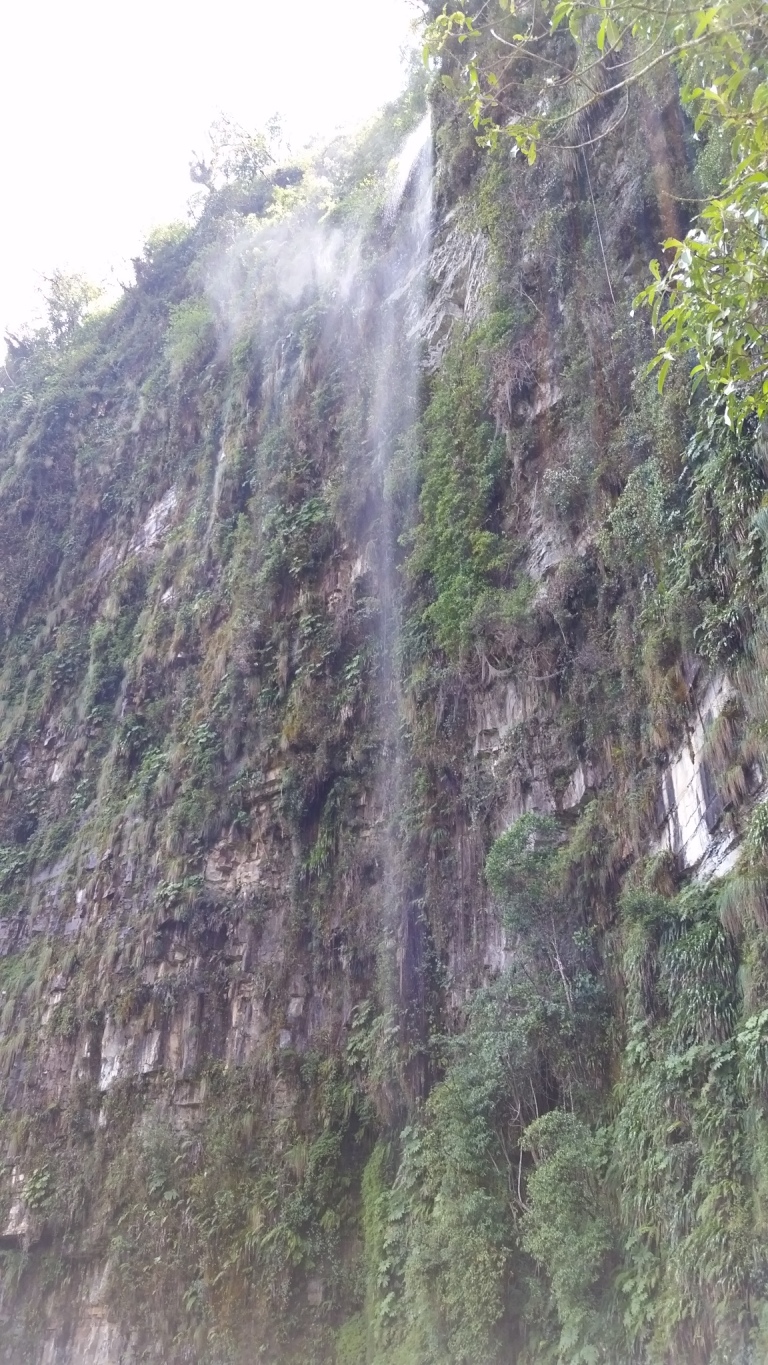 Our guide’s a big fan of throwing or kicking rocks over the side. “Listen and count!” Hmm, five or six seconds.

It’s getting warmer and warmer and the drops are starting to diminish. Our guide warns us: “This is where the most accidents happen, not necessarily because the road’s dangerous, but because people get overconfident. And there is more traffic, so be aware.” I completely disregard his advice and almost bail twice in the next few minutes, once trying to pass Murphy on the inside way too fast for the corner and having to slam on the brakes, the second while trying to go over a patch of potholes too enthusiastically – the potholes were no problem, but I was going way too fast for the patch of loose fist-sized rocks on the other side and almost went headfirst into the wall. This is really fun. 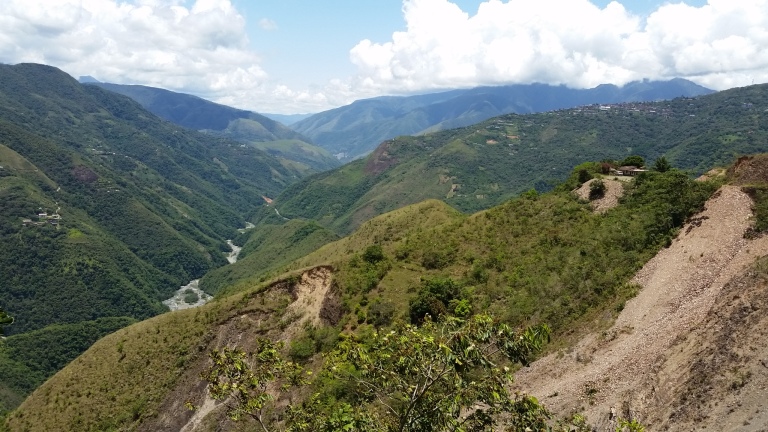 At the end of the official “Death Road” Murphy snaps the chain on his bike. Fortunately it’s about thirty feet from where our guides our waiting and they’ve got a spare. The death road’s over at this point but there are a few more kilometers to go until our finishing point, a riverside bar where cold beer awaits. 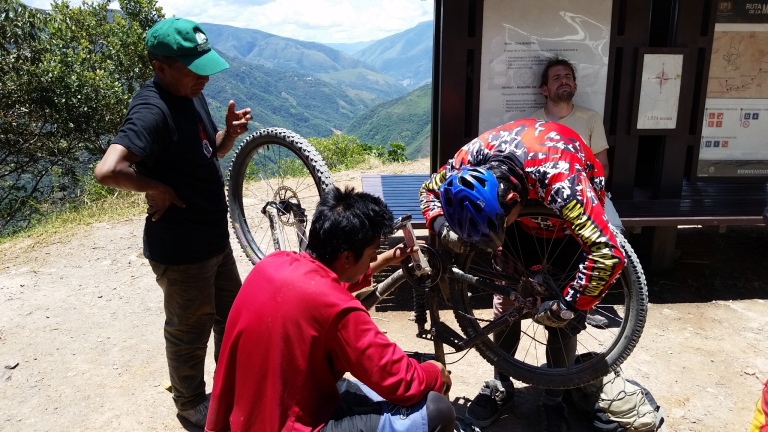 As we get closer to a small village there are more people around and the road levels out, meaning less bombing it and more pedaling. Seriously not feeling the pedaling. The weather’s too warm and I’m too lazy for this. We cross two rivers, the first really just being a stream and the second being about 20 feet across and 8 inches deep. Soaked. Good thing these boots have been soaked at least four times since Mexico and can’t really smell any more rotten.

Just past town we roll down the hill where our guide hits us with high-fives as we roll past. Towels are available and the boys and most of the others on the tour head down to the river for a swim, but I take the opportunity to get an early start on a one-liter beer at the bar. 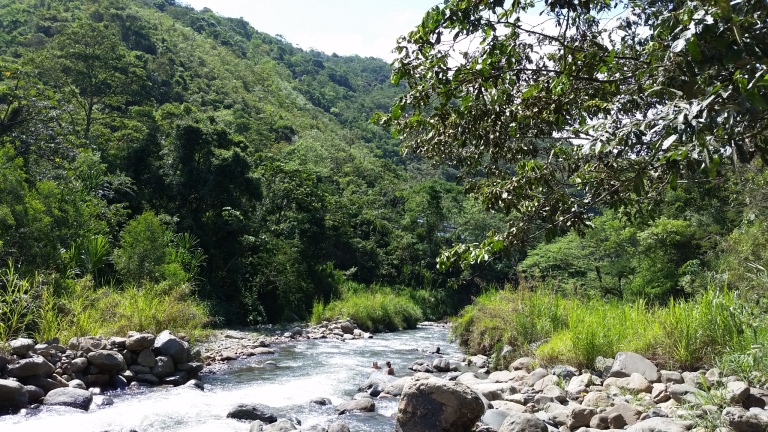 Outside the bar are two blue-and-yellow macaws, presumably with their wings clipped, hanging around the entrance. They’re absolutely tearing the shit out of the roof with their beaks. 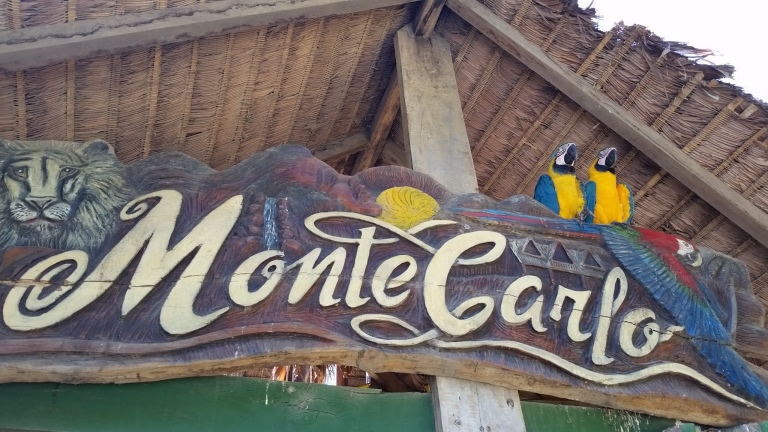 With everyone congregated we dig into spaghetti and brews while our guide hooks up a laptop to the big-screen TV in the bar – along with our main guide, there was a second guide either trailing us or racing ahead to get sweet vids and pics.

We all jump back on the bus and most of us sleep while we take the three-hour trip back to La Paz, where we’re grabbing an overnight bus south to Uyuni and the largest salt flats in the world.