Overnight at the Indiana state park it dawned on me that this is Labor Day weekend.  I came to this realization after the park – which was sparsely filled when I arrived near dusk – continued to fill up with late arrivals until almost midnight.  Kids were screaming and dogs barking until about 1 am.  This means more traffic on the roads, but more importantly, it’ll be difficult to find decent campsites.

My plan was to get up in roll into Missouri for breakfast.  I crossed a river that I thought would be marked with a sign saying “Missouri”, although the river seemed a lot smaller than I envisioned the Missouri River.  I crossed into Illinois – oops, forgot that it existed – so I had breakfast there instead.  The sky opened up and I got pounded by heavy rain within seconds of crossing the border, slowing everything down.

Upon entering Illinois I was definitely in the Midwest, and by the end of the day I was somewhere in central Kansas.  There’s not a lot to say about the drive, to be honest.  Initially the scenery pretty much looked like this on repeat:

As I got further west and it started to dry out, the loop changed to this:

I veered off the main roads in a few places but they didn’t really seem much different than the interstates.  Two big exceptions were St. Louis and Kansas City, both of which I drove through.  I really didn’t notice anything interesting in KC, but seeing the arch in St. Louis was neat (I didn’t stop to take a picture) and on the way out of town there was a bridge covered with Israeli flags and signs reading “Impeach Obama”.  I also drove past Ferguson but figured I didn’t really need to stop there.

I obviously enjoy driving – I wouldn’t be doing this if I didn’t – but this really was one of the most boring days of driving I’ve ever done.  Preferable to gridlock traffic but not much else.  I’d been warned not to take this route because it is so boring, but I didn’t want to go any further south because of the heat (and my lack of AC) and didn’t want to backtrack further north either.  I only took one picture of the terrain the whole time (it was actually taken early the next day but everything looks the same), just so I’d have an image for the main page: 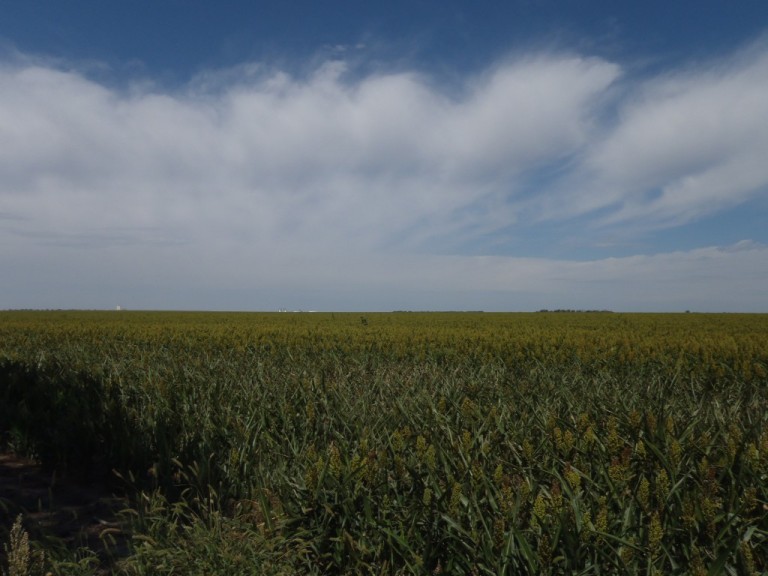 That’s pretty much it.  I did see a few historical sites but I didn’t bother pulling in – I don’t know who Daniel Boone is, and I feel like I should, but I think I’m picturing Davy Crockett when I try to conjure up an image.

One very poor decision I’ve made is not to bring sunglasses (generally speaking, a pair of glasses lasts me about a week, it’s a real waste of money).  As sunset was approaching and I didn’t see anywhere appealing to camp, I had to decide whether to push into the night and get a hotel or just throw up a tent somewhere.  The wind was whipping really good in places and the radio mentioned overnight thunderstorms so I decided to clock more miles and get a hotel.  Unfortunately as the sun was setting and I was driving directly into it, it really screwed up my vision.  It felt like someone had rubbed sand in my eyes.  Once the sun actually did set it didn’t feel any better, and my sore eyes combined with the flat terrain to make it very difficult to perceive distances.  I had to pull over after only about half an hour of night driving and get a room in a town called Hays.

Glad I did stop, though.  I found a cheap Motel 6 and had dinner at a BBQ joint where a really friendly bartender gave me the lowdown on the central Kansas scene.  Most of the town was at some kind of racing event so she and I were pretty much alone at the bar, just shot the breeze for a couple of hours.

Back in my room I relaxed with a six-pack and decided to sleep in the next day, but not before being woken up by thunderstorms and strong winds in the night.  I’m really glad I didn’t camp.